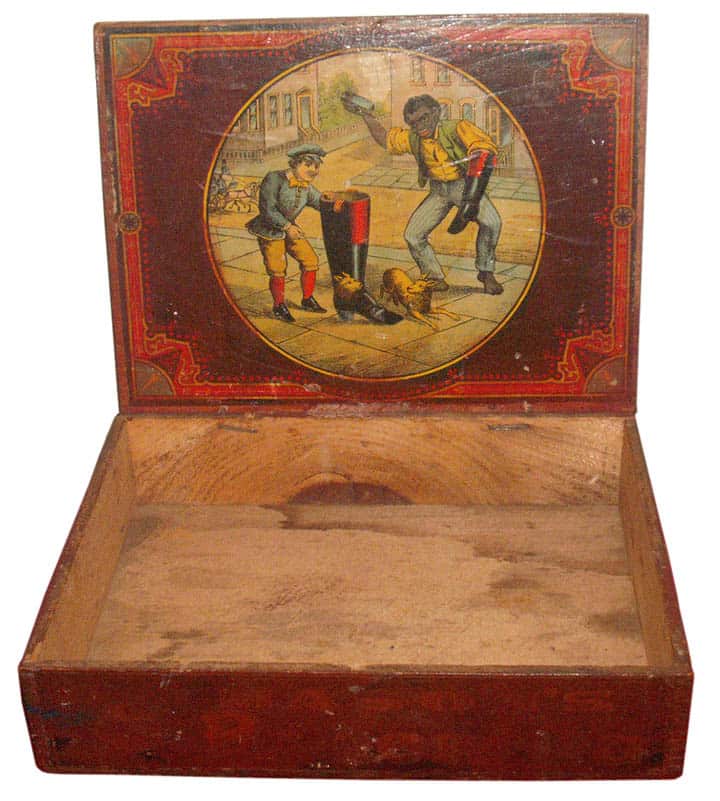 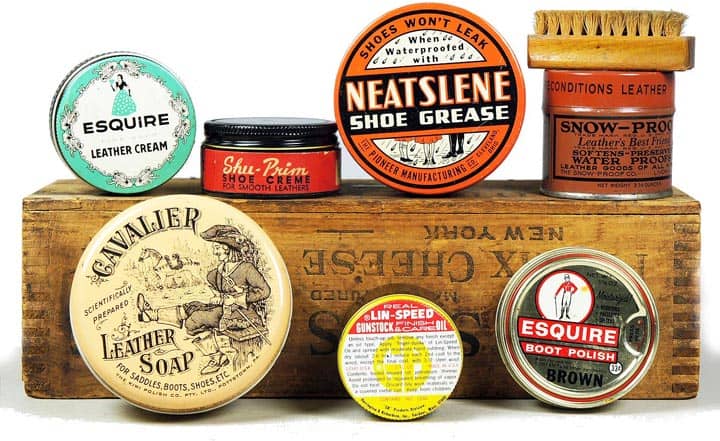 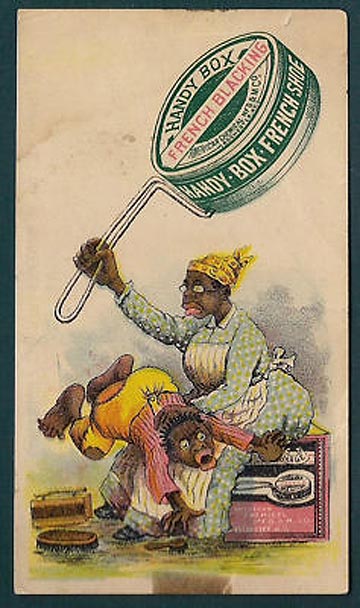 This past week, a number of primarily eastern US collectors have been posting some really great pictures of Blacking bottles. I thought I would take a moment to nest a few images with support material.

One of my memories from childhood was pulling out a wooden polish box from my fathers clothes closet with instructions to polish my shoes for Sunday School. I remember the little circular cans with different names and colors, the oily rags, the brush and mostly the nice smell. I really didn’t mind the task, though I’m sure I griped as most children do.

In the 19th century, many forms of shoe polish were available in bottles, yet were rarely referred to as shoe polish or boot polish. Instead, they were often called blacking, especially when mixed with lampblack which is the fine soot collected from incompletely burned carbonaceous materials, used as a pigment and in matches, explosives, lubricants, and fertilizers. Blacking is actually “a substance (as a paste or polish) that is applied to an object to make it black”. 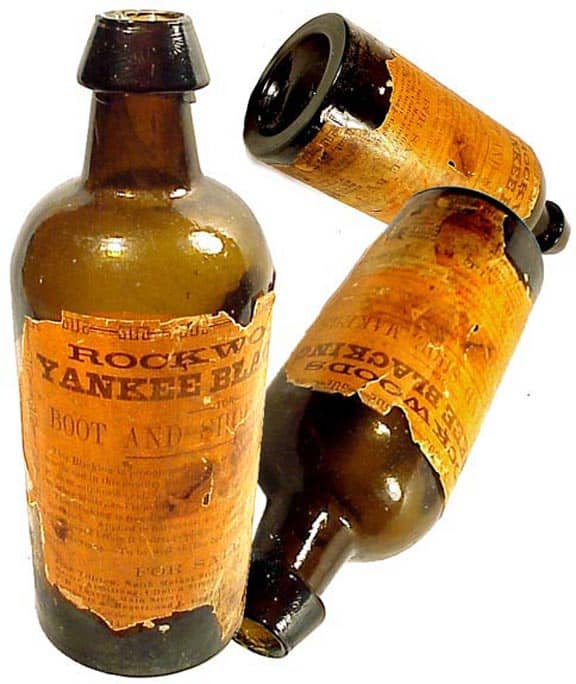 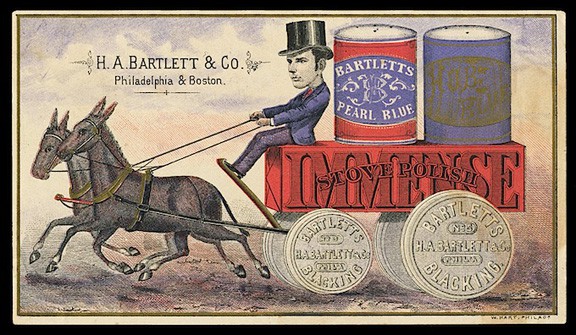 Blacking was also used on stoves (see above) and the grates of fireplaces in Victorian times. Mrs. Beetons Book of Household Management (Chancellor Press, 1982 Edition) gives the following instructions under Duties of the Housemaid:

The cinders disposed of, she proceeds to black-lead the grate, producing the black-lead, the soft brush for laying it on, her blacking and polishing brushes, from the box which contains her tools. This housemaids box should be kept well stocked. Having blackened, brushed and polished every part, and made all clean and bright, she now proceeds to lay the fire. Mrs Beeton recommends a blacking made of asphalt, linseed oil and turpentine. 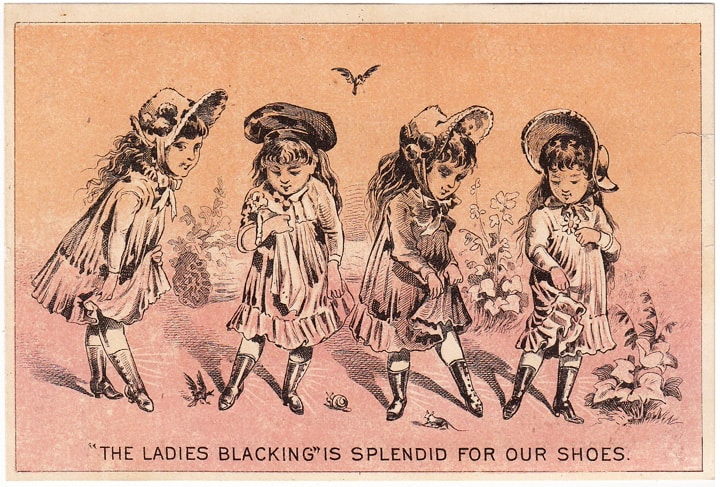 Here are six different blacking bottles… not sure where they were produced, but I assume that they are all from the Northeast. As Mark Yates had mentioned, these were likely produced at most (or all) of the bottle glass factories in the Northeast during the first half of the 19th century. – Michael George 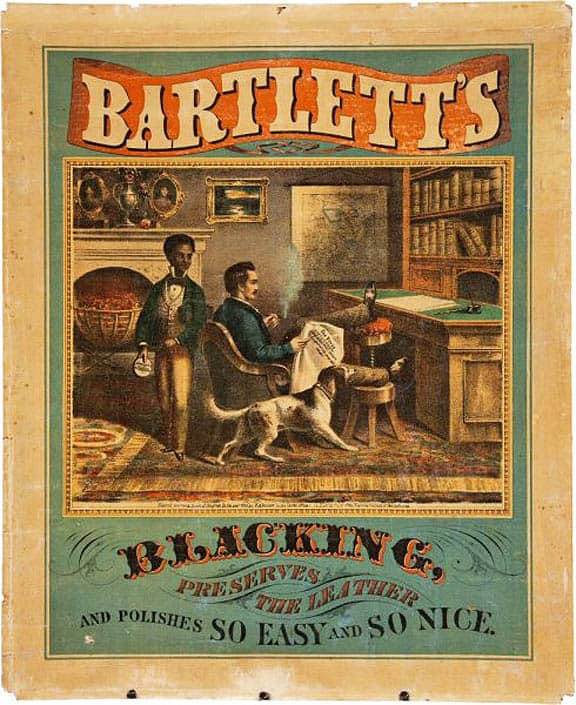 This early 12″ x 15″ chromolithograph was published in Philadelphia in 1863 by H. A. Bartlett. It advertises a boot polish and reads: “Bartlett’s Blacking, Preserves The Leather and Polishes So Easy and Nice.” The central image shows a domestic scene in a gentleman’s study. A young black valet has just finished polishing his shoes. Lifting one leg upon a stool, the master of the house admires the job. Not only can he see his reflection on the shoe, but his dog can see his reflection on the other shoe! – Heritage Auctions’ Political & Americana Auction #6086, May 12, 2012 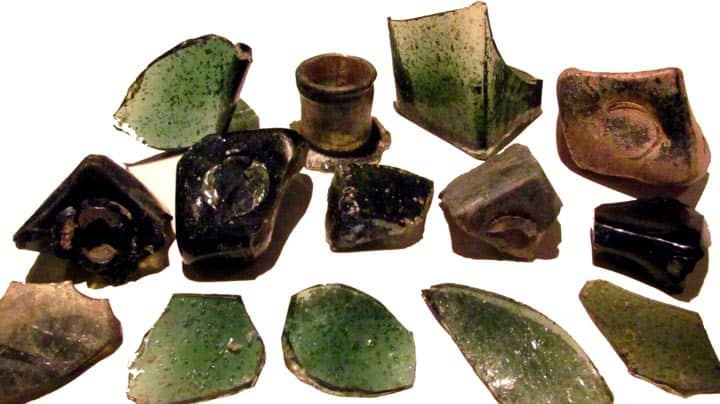 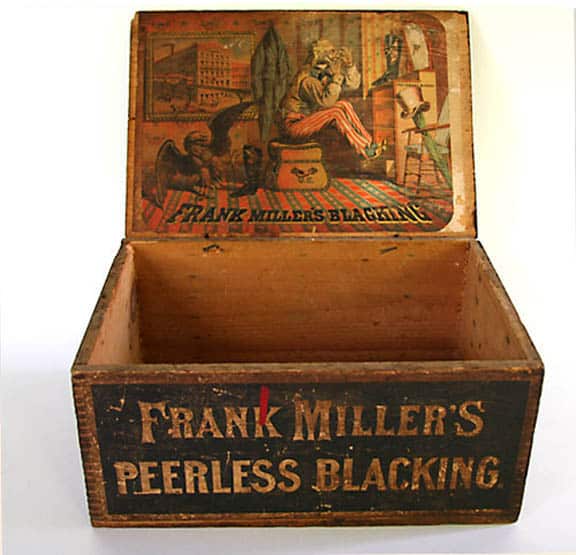 Great Uncle Sam and American Eagle Original Label. This rare circa 1890 shoe blacking box depicts a resourceful Uncle Sam using his boot as a makeshift shaving mirror. In the lower lefthand corner of the lithograph, Sam’s pet bald eagle fights its reflection in the other boot! – Z & k Antiques 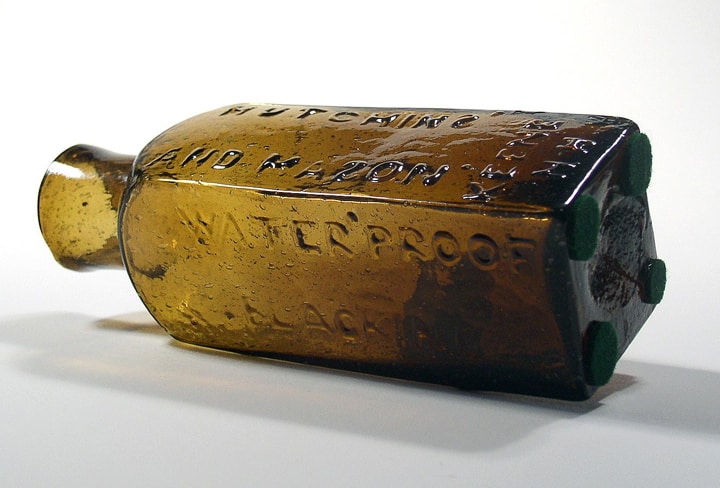 One of the very few square blacking bottles that is embossed. All of the known examples were found together in one yard in Keene, NH. It is believed that the bottles were never filled with product. – Michael George 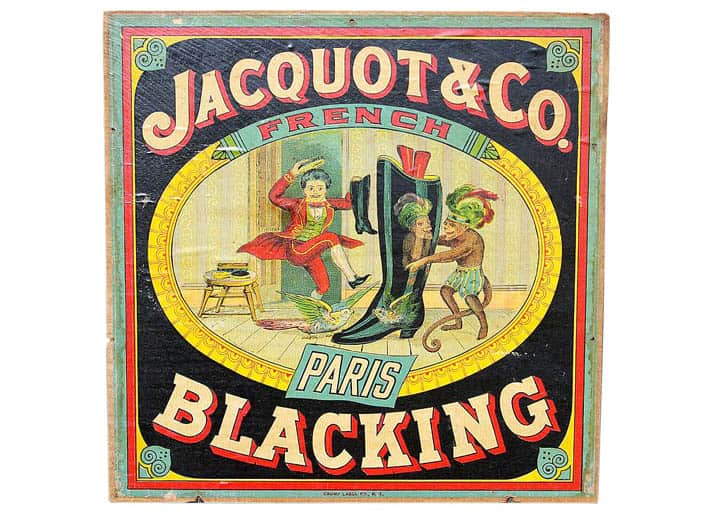 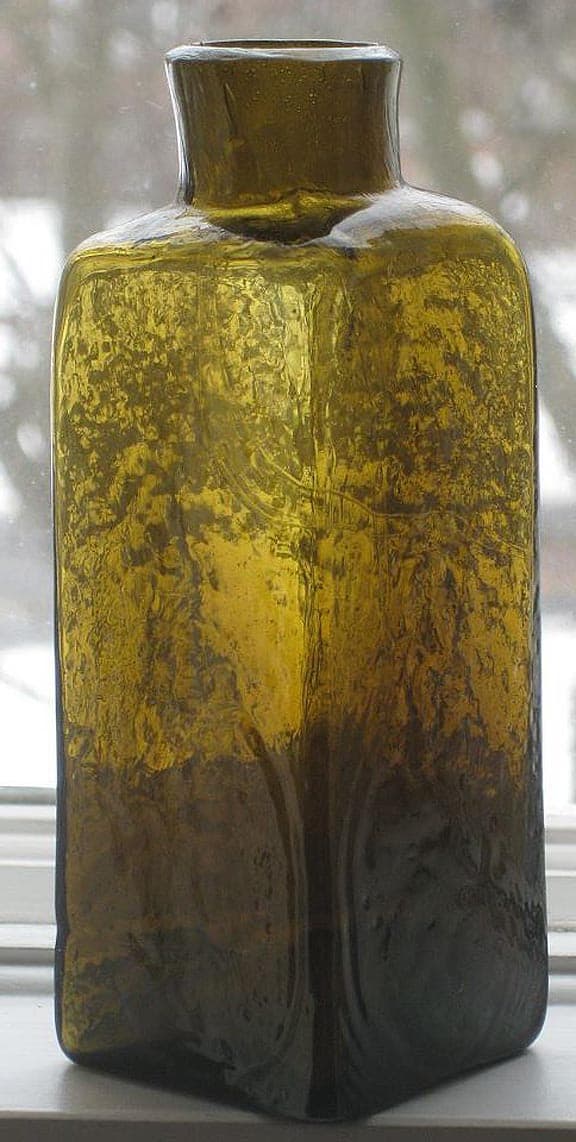 OK, it’s not a lily pad, a mini glob or something else fabulous but really, are there many bottles more beautiful than a stout New England blacking? Just got this one and it is a great, great piece of glass. – Jeff Noordsy 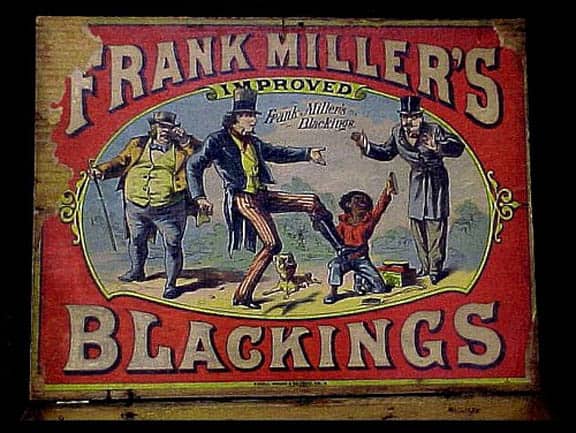 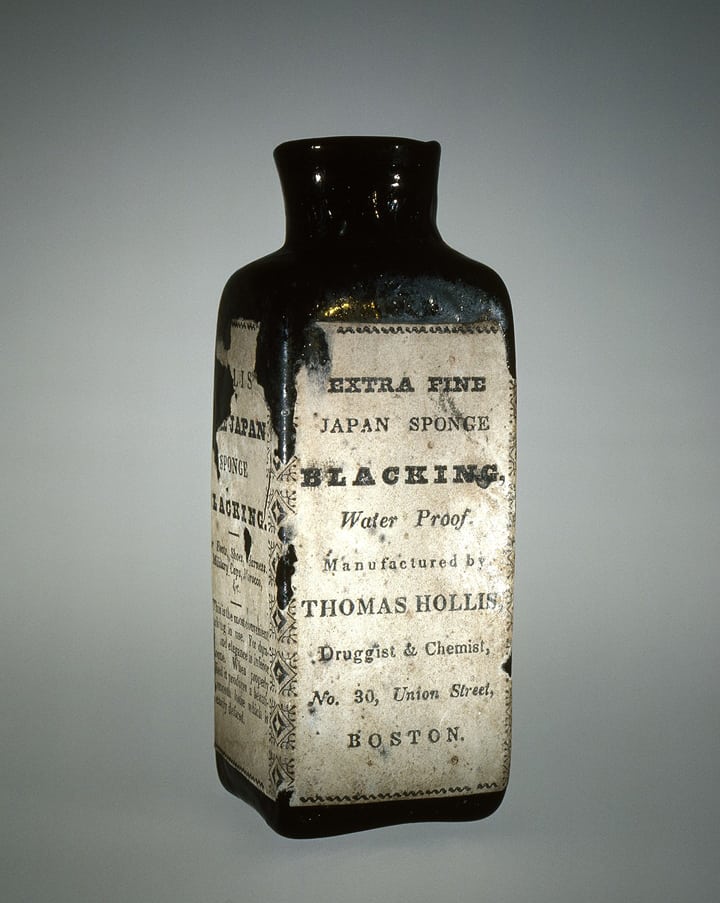 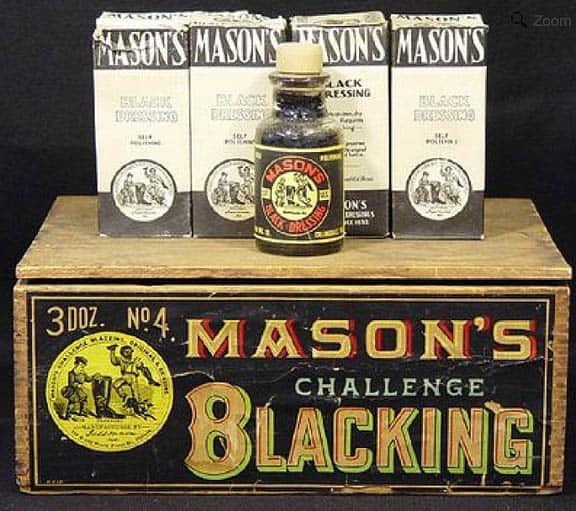 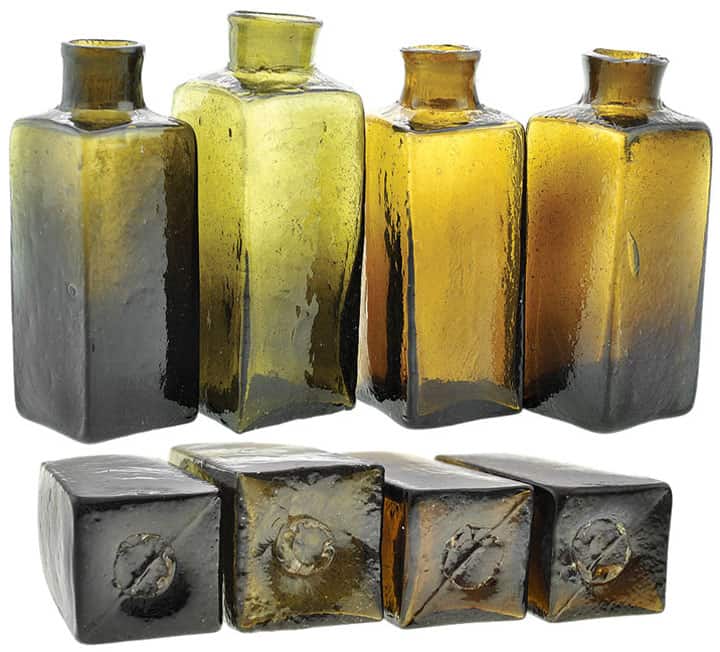 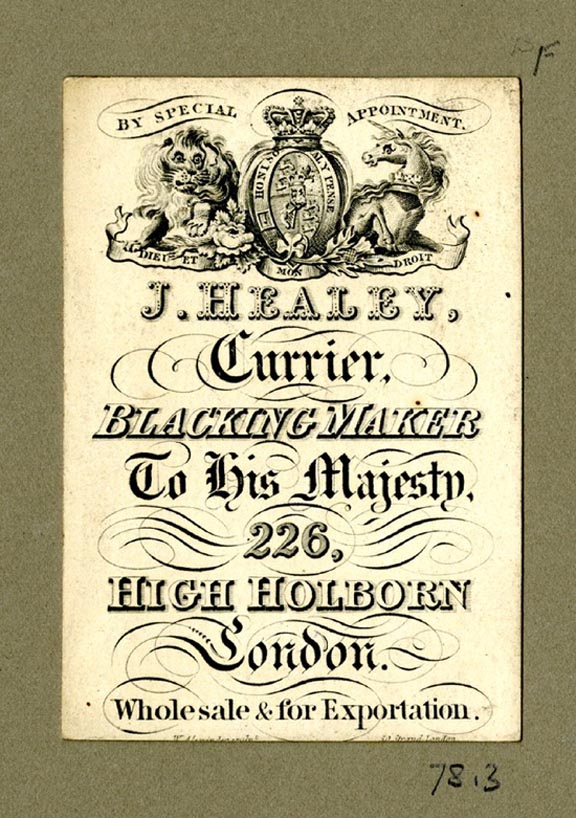 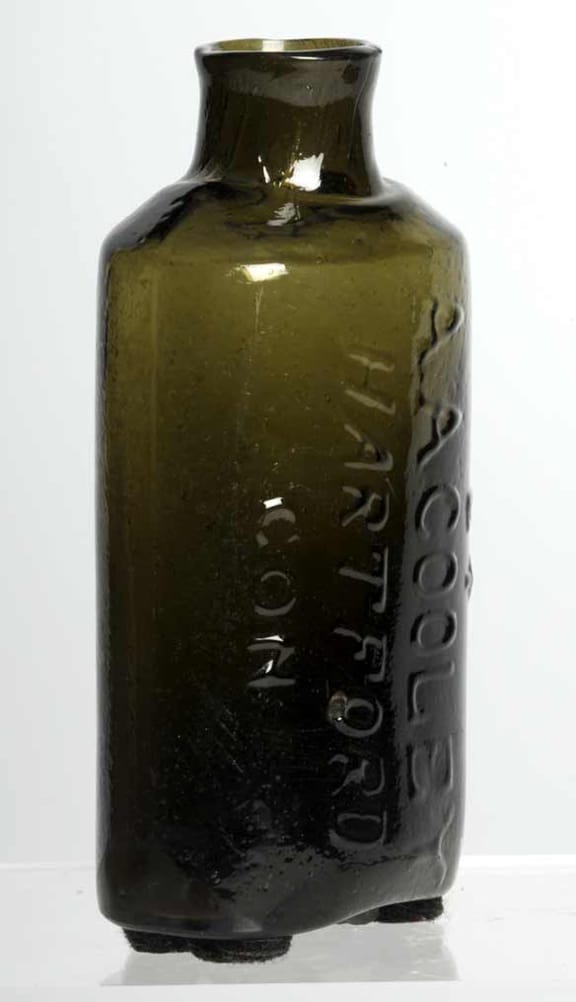 A.A. COOLEY HARTFORD CON blacking bottle. 4.5 inches tall. Huge jagged open pontil. Needs felt pads in order to stand up straight. This bottle was sold to me as repaired. I can not find the repair. looks great under a black light. There is a small open bubble in the letter o of HARTFORD. Minor scratches on the back. – BottleNut.com 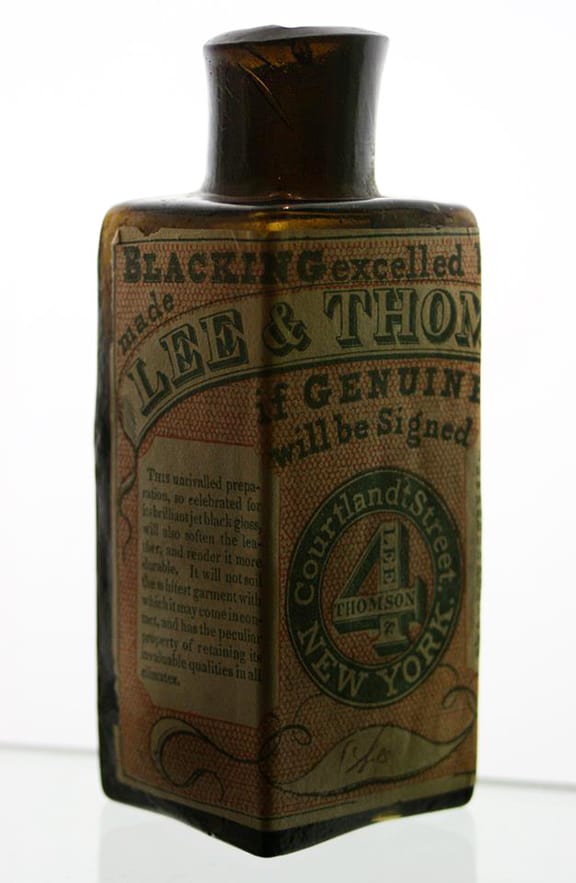 Since we are posting a few blackings… here is one that I had tucked away with a group of labeled bottles. This one has a nice colorful and graphical label covering 3 sides. The birthday boy John Panella will appreciate this one! – Michael George 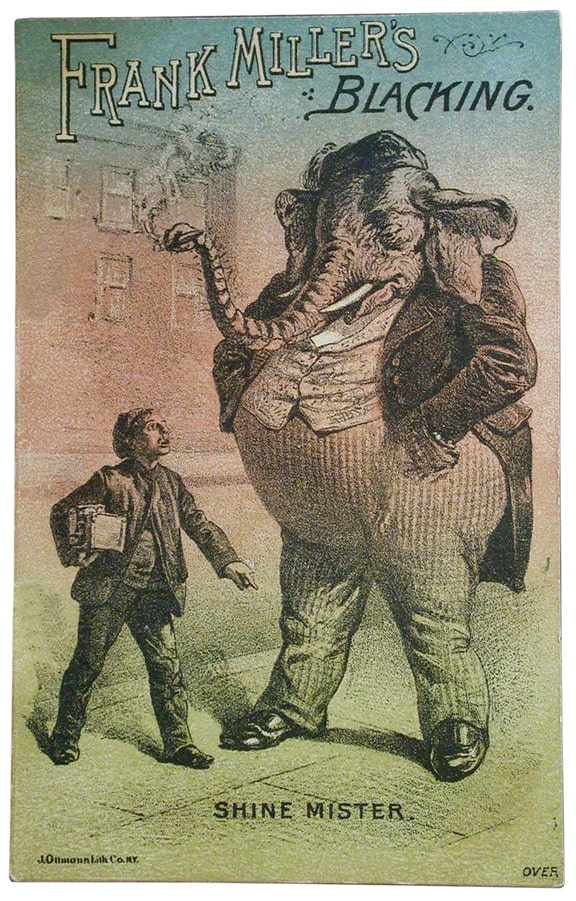 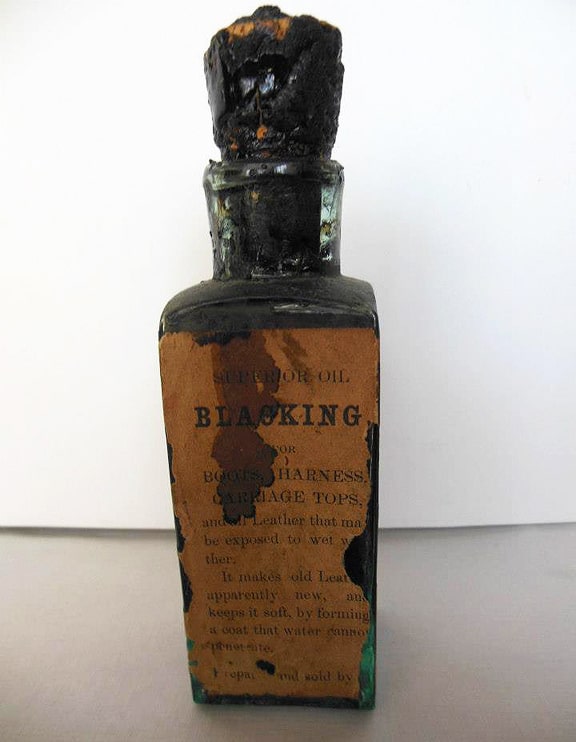 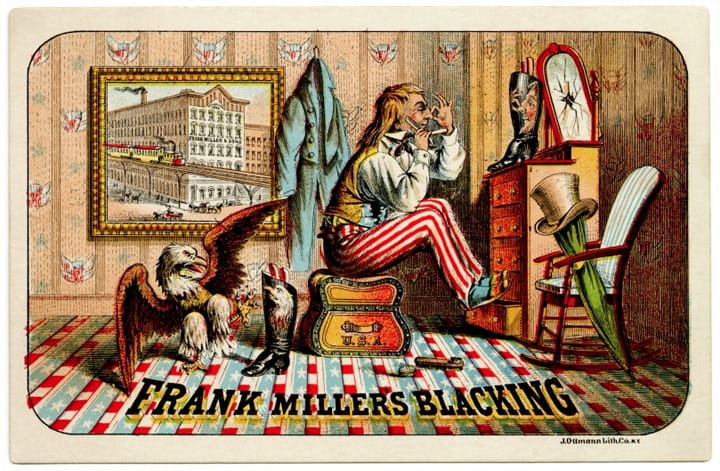 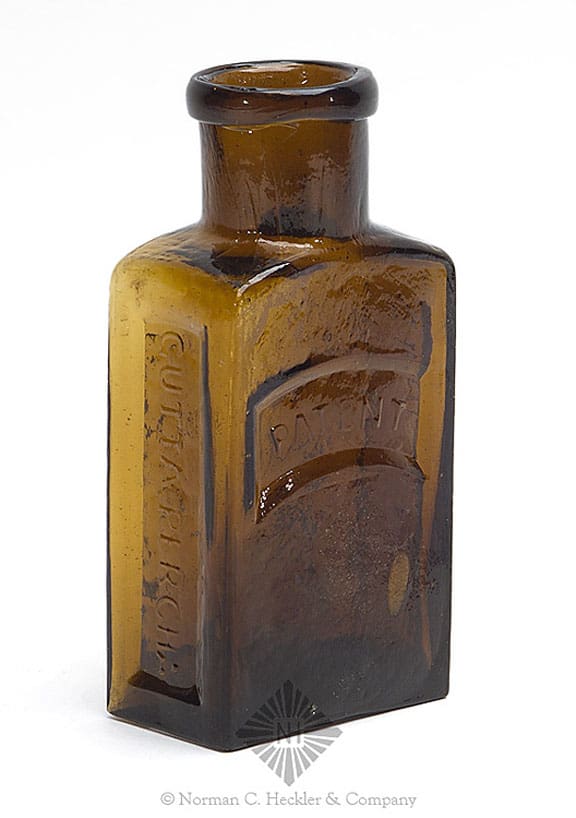 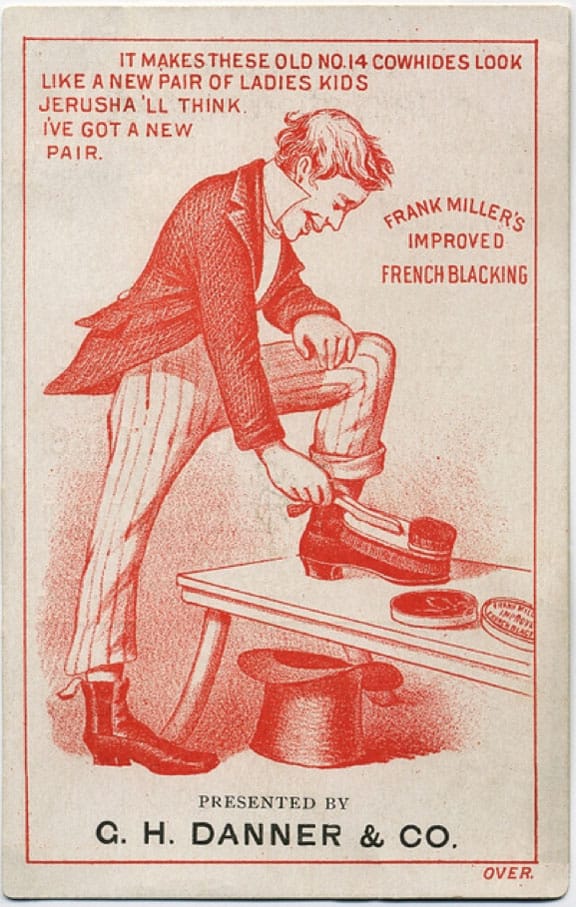 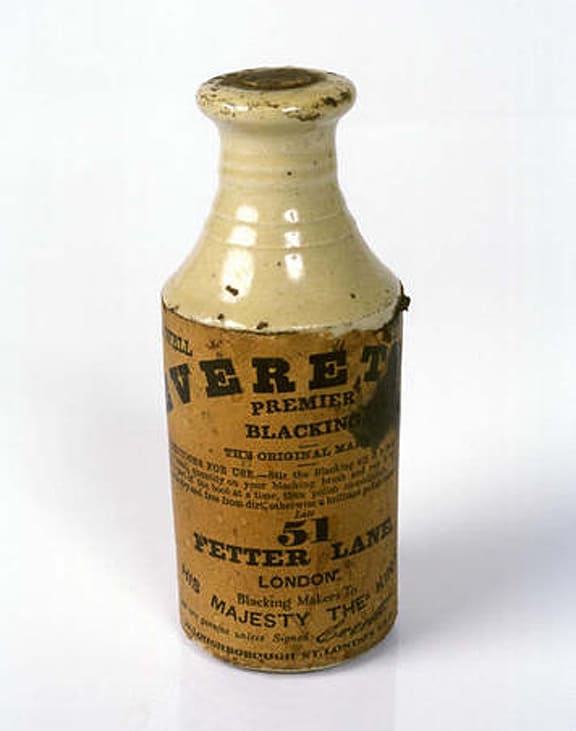 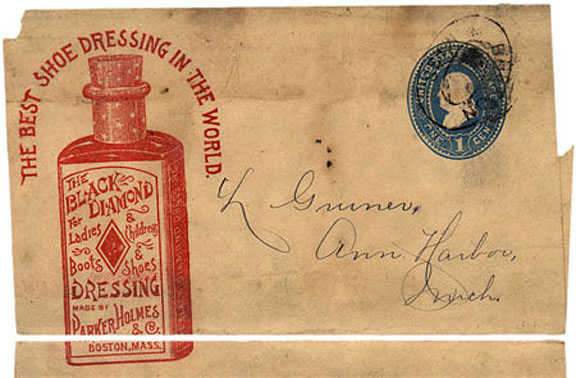 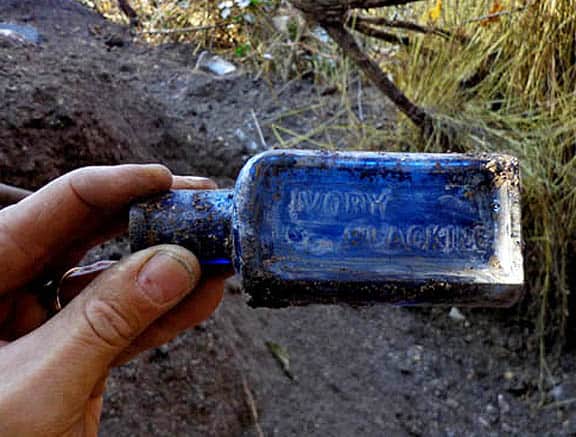 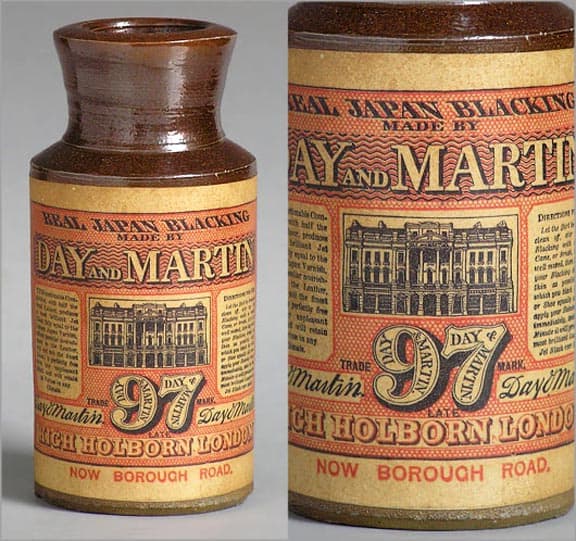 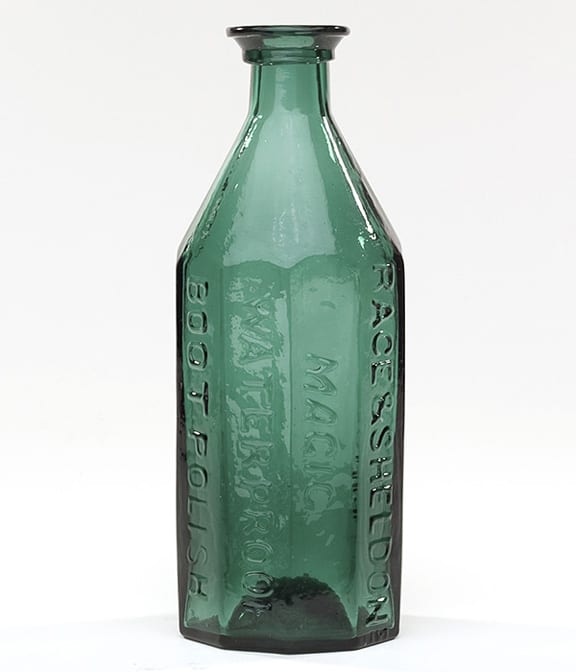