The first revenue stamps in United States were produced to collect taxes on liquor in 18th-century America and were known as Supervisors’ Seals. These revenue stamps were embossed and known as the First Federal Issue. Later, new tax laws were passed in 1862 to help the North pay the costs of the Civil War although the practice of using printed stamps on adhesive to collect taxes persisted long after the conflict was over. The primary items taxed included patent medicines, perfumes, matches and playing cards. The taxes was also affectionately called the ‘Match & Medicine Tax’ and the “Sin Tax’ as most of the items taxed include items of shady character, at least to some.

Documentary Revenue Stamps were designed to be affixed to documents such as receipts, promissory notes, powers of attorney and life-insurance policies. Proprietary Revenue Stamps and Private Die Proprietaries were issued to collect taxes on manufactured goods such as tobacco products and bottles of alcohol. Taxpaid tobacco stamps were attached to packs of cigarettes while wide, strip-shaped bottle stamps were affixed to the tops of liquor bottles.

The law stated “That any proprietor or proprietors of proprietary articles, or articles subject to stamp duty under schedule C of this act, shall have the privilege of furnishing, without expense to the United States, in suitable form, to be approved by the Commissioner of Internal Revenue, his or their own dies or designs for stamps to be ued thereon, to be retained in the possession of the Commissioner of Internal Revenue, for his or their separate use, which shall not be duplicated to any other person. That in all cases where such stamp is used, instead of his or their writing, his or their initials and the date thereon, the said stamp shall be so affixed on the box, bottle, or package, that in opening the same, or using the contents thereof, the said stamp shall be effectually destroyed;…”

A discount was provided for companies using private die stamps. The law further stated “That any proprietor or proprietors of articles named in schedule C, who shall furnish his or their own die or design for stamps, to be used especially for his or their own proprietary articles, shall be allowed the following discount, namely: on amounts purchased at one time of not less than fifty nor more than five hundred dollars, five per centum; on amounts over five hundred dollars, ten per centum.”

Many of the companies used the tax stamps for ‘free’ advertising for their products. A number of which are depicted below. Most of these stamps were printed by Butler & Carpenter (later Joseph R. Carpenter) of Philadelphia until August 31, 1875. Between September of 1875 and October 1880 the stamps were printed by the National and American Bank Note Companies, and in 1880 the Bureau of Engraving and Printing assumed the job, until July, 1883 when the proprietary taxes ended. 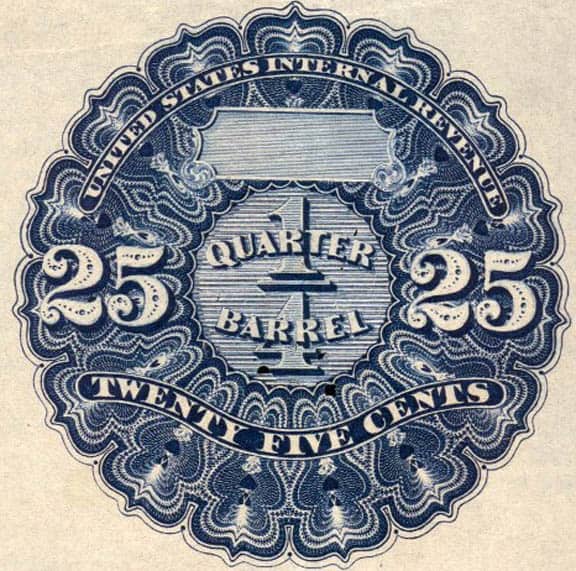 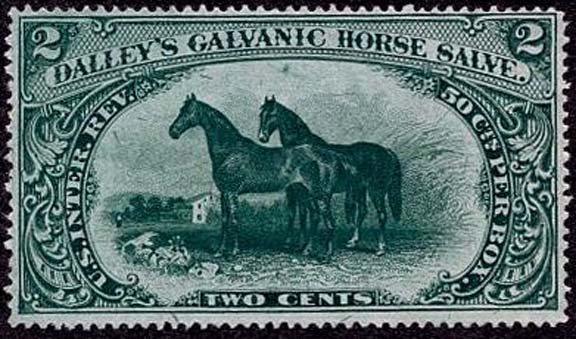 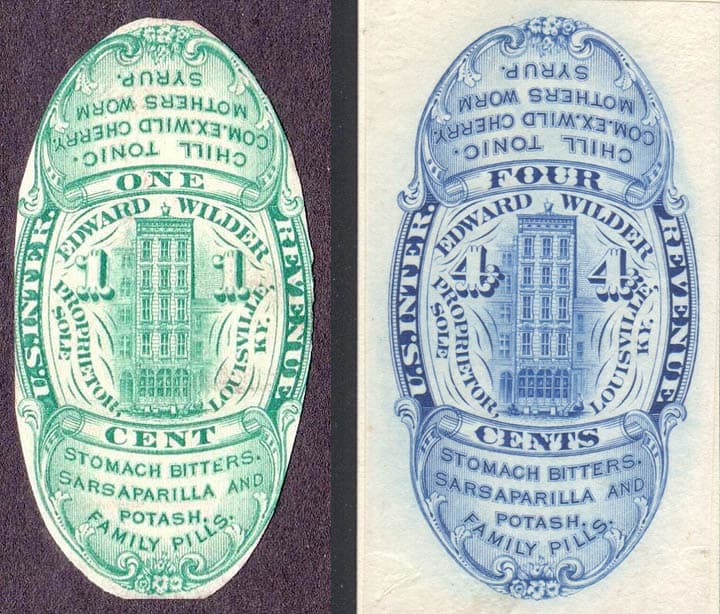 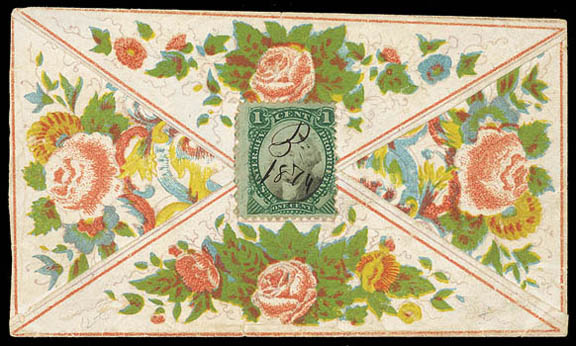 (First Proprietary Issue) Proprietary, 1871, 1¢ green & black, violet paper. Two patent medicine wrappers, each with a stamp affixed, first is a spectacular multicolor envelope for Dr. M.L. Byrn’s Olio de Flora – “Perfume for the Million” with the stamp affixed to the flap with manuscript. “B, 1874” cancel; second is a wrapper which contained a “Sample Bottle of Green’s August Flower” from L.M. Green of Woodbury N.J. – Schuyler Rumsey Philatelic Auctions 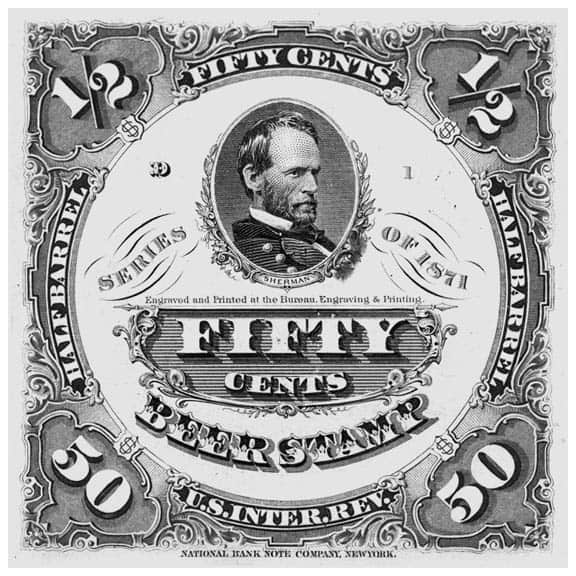 J.W. Campion’s Pine Tree Tar Cordial, a remedy said to be effective in curing coughs, sore throats and consumption of the lungs. Campion, a former furniture maker, bought the rights to the preparation from fellow Philadelphian L.Q.C. Wishart, in 1874. Wishart had used government-issue tax stamps, but Campion went the private die route and had four-cent proprietaries printed on silk-bearing, pink and watermarked paper (1875-1882). The pink stamp illustrated has been the most elusive of the three and prices reflect that condition. 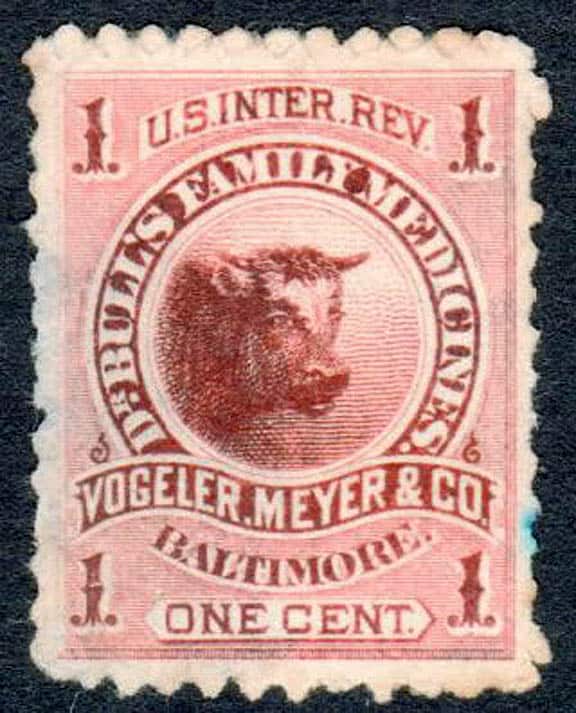 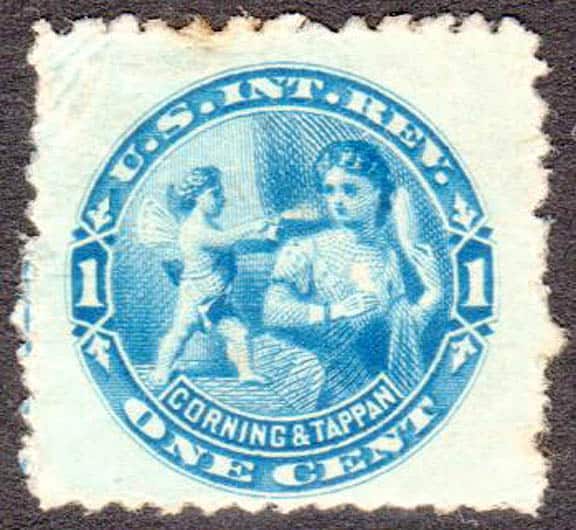 Four Cents – Duponco’s Golden Periodical Pills – S.D. Howe Proprietor, New York. Stamp used by New York physician Stewart D. Howe, on his boxes of Duponco’s Golden Periodical Pills. These pills were intended to relieve suffering from any of the “complaints peculiar to females, both single and married.” Howe acquired the rights to the pills in 1866, but only used private die stamps with them between 1870 and 1873. The black design was printed on both “old” brittle paper and on porous silk-bearing sheets. 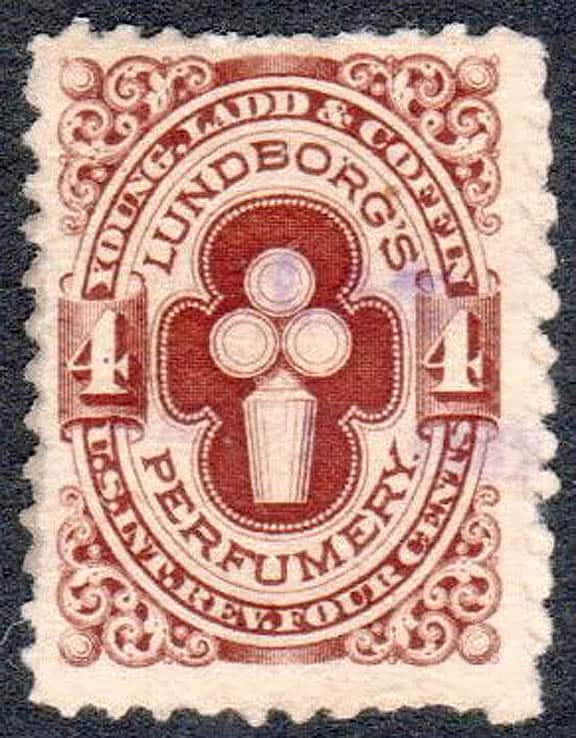 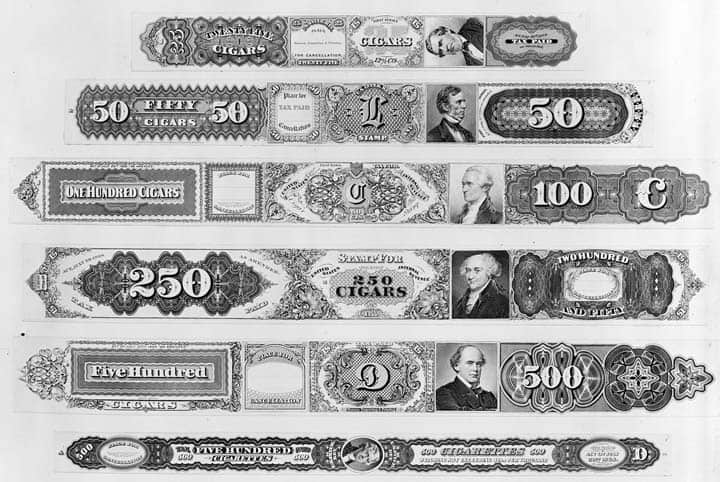 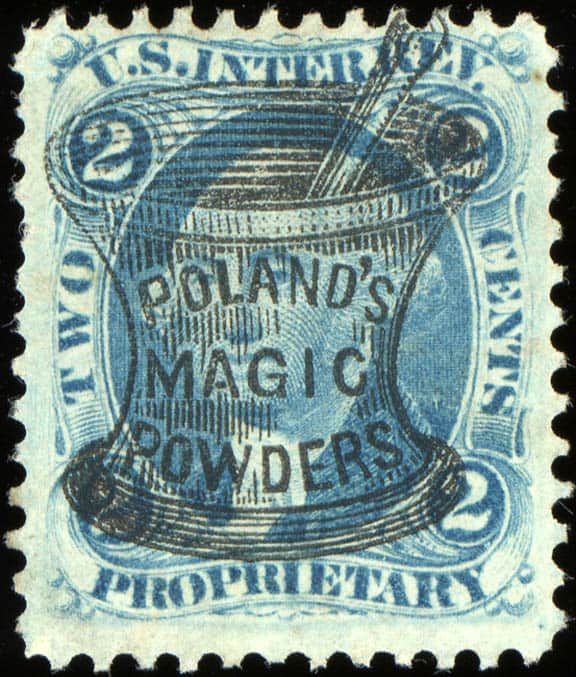 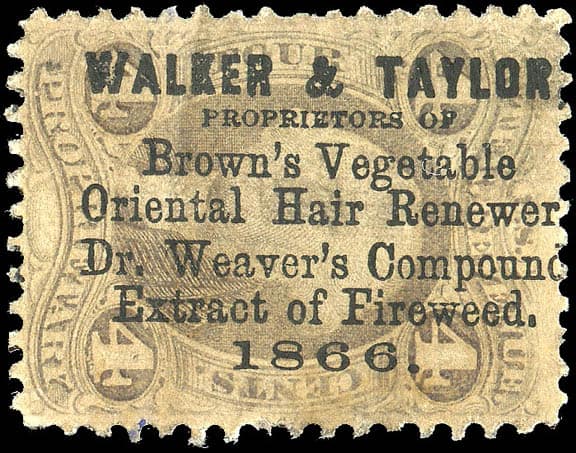 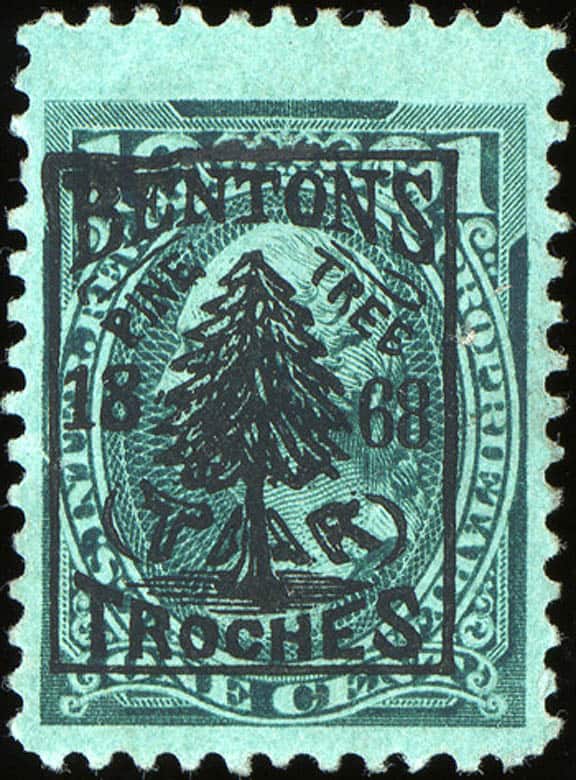 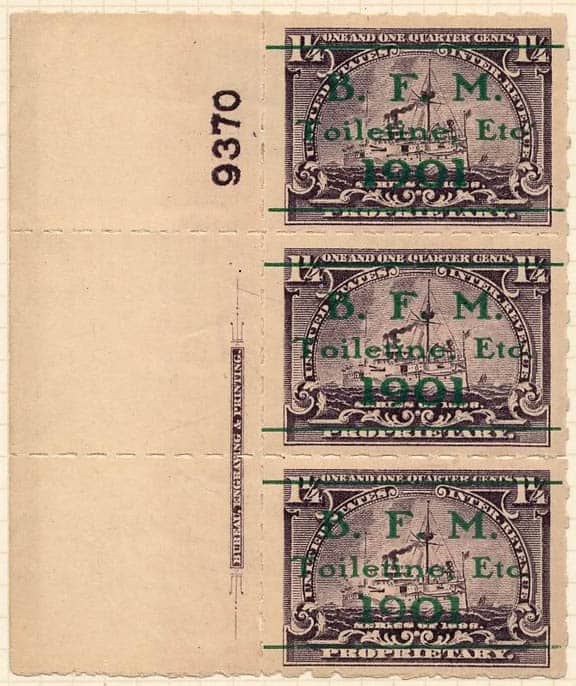 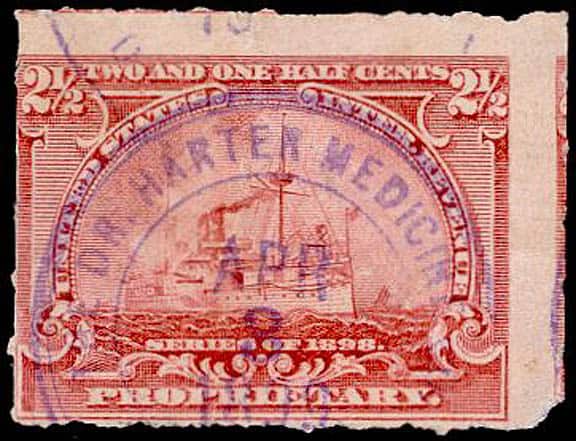 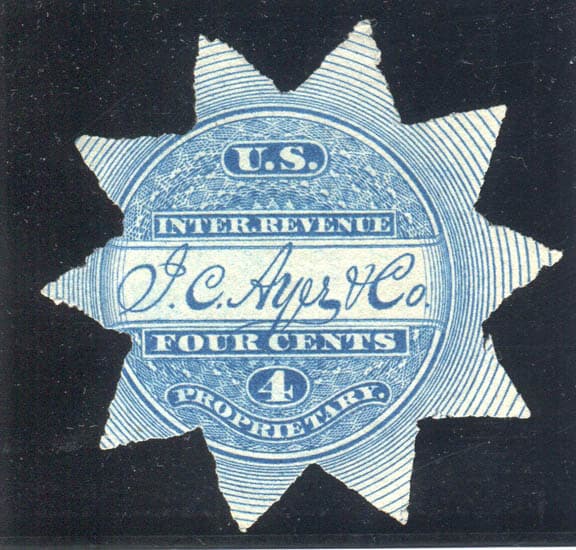 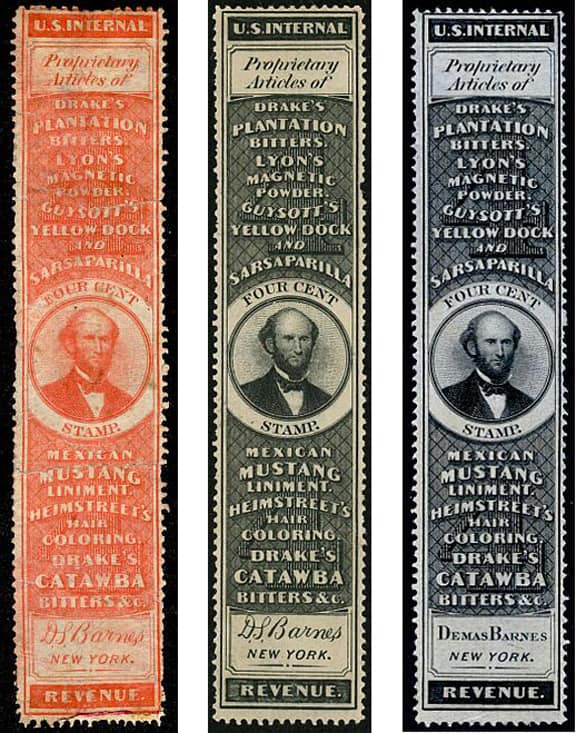