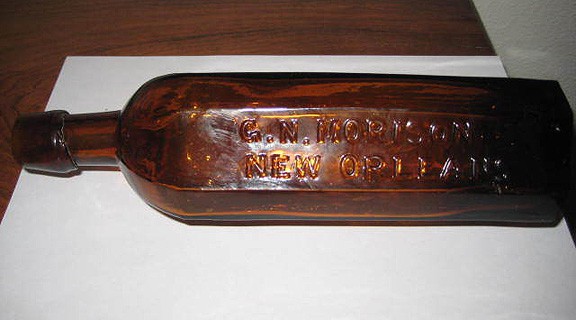 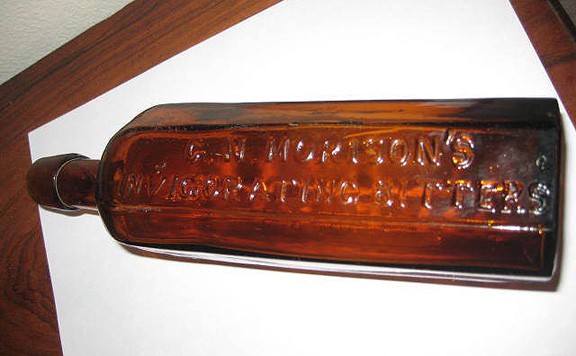 Many bitters collectors have been watching a bitters bottle on ebay (see listing) that closes today. A little early research shows shows that G.N. Morison was a wholesale and retail druggist and dealer in patent medicines located on No. 12 Magazine Street, New Orleans. It is ironic that this bottle was found at the Magazine Antique Mall in New Orleans. I have seen his name spelled Morison, Morrison and Morisson on historical documents.

It appears that ‘G’ stands for George and ‘N’ for Noble. George Noble Morison (I will use this spelling of Morison as it appears in most of his advertising and on the bottle. It seems that you would proof your advertising and product design) was born in Philadelphia, Pennsylvania October 20, 1814 and married a Louisa Chapman Harvey on November 14, 1849. George’s father was from Scotland. They lived in New Orleans. The family later moved to Philadelphia and are listed in many Census reports up to the 1880 Federal Census. George at 65 years old was listed as a ‘Gentleman’ for occupation. Eight children are listed. He died on August 8, 1886 in Philadelphia.

The listing is as follows:

This is the earliest of the bitters known from New Orleans. It is one of two known. Embossed G N Morison’s Invigorating bitters on one side and G N Morison New Orleans on the other. It is crudely made 8 sided like a gilka bottle, and dates from the 1850’s. It has a refired pontil, and is damage free but for a 1/2 inch sliver on the edge on the bottom, not too deep. No cracks anywhere and a perfect drippy top. All of the embossing is very strong. The other bottle is in the hands of a serious New Orleans collector. This just turned up at the Magazine Antiques Mall on Magazine street, and was spotted by an experienced collector. Don’t miss it, you will never see another. 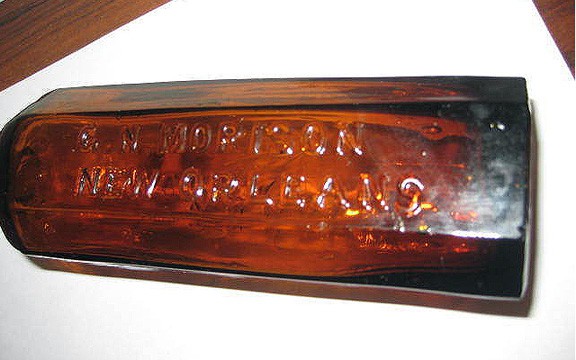 The ebay seller “ntqlvr” seems legit with the following handle and information:

Hi, my name is Gene Baudouin, and I have been a collector of Louisiana furniture, and other things related for over 35 years. Later my collecting spread out to guns, bottles, early electrical items, etc. And basically anything of quality and rarity. I discovered ebay in 1997, and began selling off some of my stuff to make room for more junk! It has been a lot of fun and hope to keep finding more interesting items. Keep looking for my auctions, and maybe i will have what you are looking for. 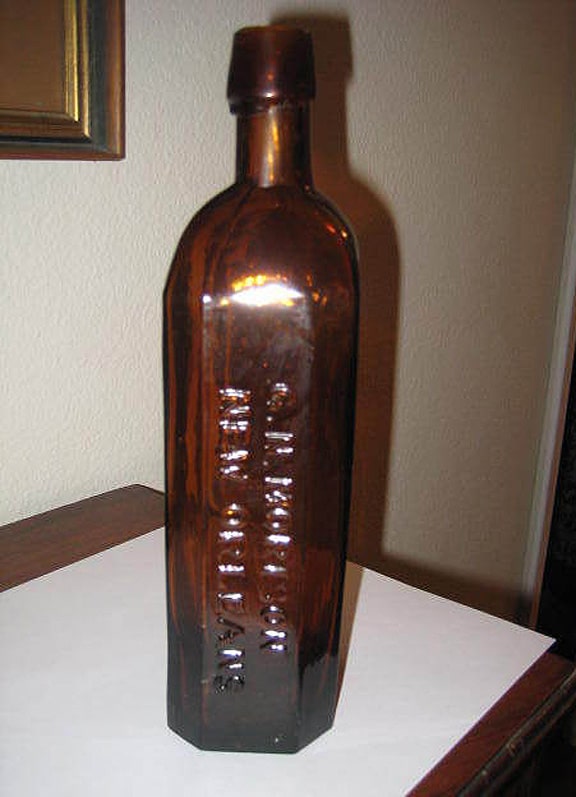 Only one question has been posted with the article:

Q: Hi, Could you send me the measurements on the bottle? height, base, width of corner bevels? Thanks. I would really appreciate the information. Great bottle!! Bill Ham
A: Sorry, I forgot the measurements, it is 9 and 1/2 tall, by 3 wide, 2 and 1/2 deep. 3 inches wide across the bevels It is also a very heavy bottle for it’s size, plenty of glass. 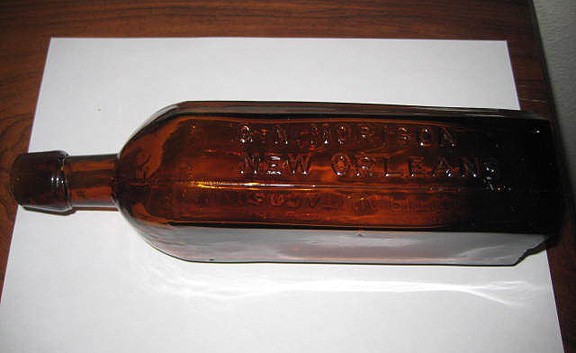 Here is an email from the Morison’s seller. I had gotten measurements from them.

“Thanks, as I said there are only two ever found of this bottle, no broken ones either. The other one was found about 30 years ago by a woman who decided to dig bottles, and crawl under houses in New Orleans after her husband died, she and her son combed the whole city of new Orleans and found many rare pieces.” 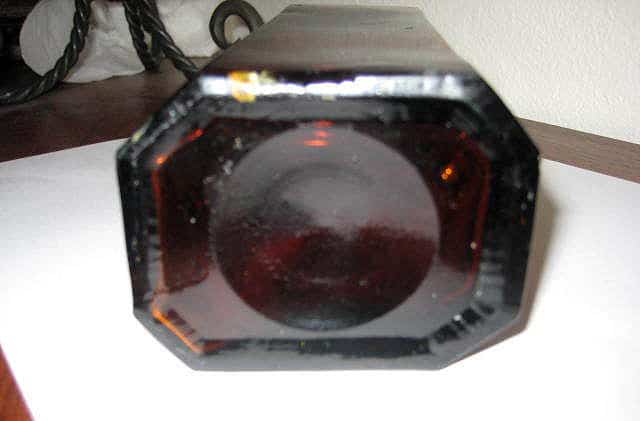 The updated listing in a future Bitters Bottles Supplement will be: 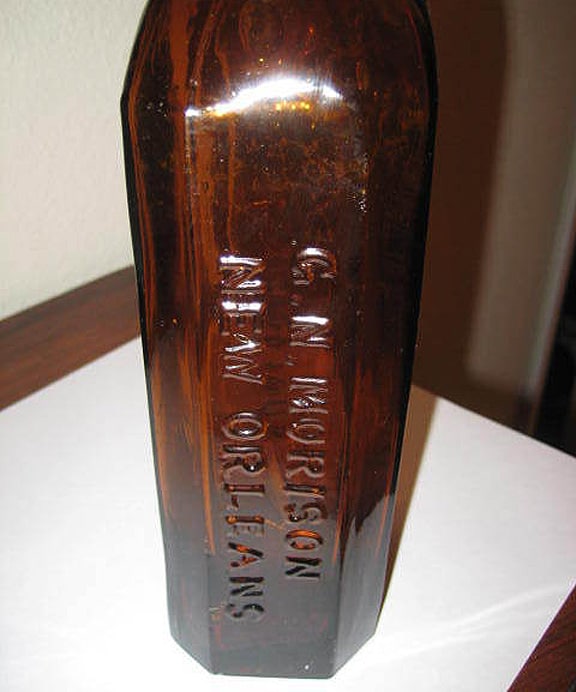 The wholesale druggist, G.N. Morison seems to be the closest to our current-day drugstore. His full-column advertisement lists having 20 kegs of refined saltpeter, 100 pounds of chloroform and 50 gallons of Pure Bay Rum “on hand and coming in store.” He also carries paints, turpentine, paint brushes, and “Dr. Abernathy’s Detergent-the Infallible Remedy for gonorrhea,” pure brandy for medicinal purposes and Morison’s Invigorating Bitters for night sweats and diarrhea.

WILLIAM T. MORISON – John Morison, the father of William T. Morison, was born in Keith, Scotland, in 1760, came as supercargo from a Scottish port to America, and settled in Petersburg, Va. In 1801 he removed to Philadelphia, and soon after purchased the property on which his son now resides. He was, in 1790, united in marriage to Ann Coke, a native of Virginia, and had children, John P., a physician, who died in 1849, Jane (Mrs. Robert Montgomery), who died in 1875, Mary Ann (wife of Rev. Nathan Harned, a native of Rockingham County, Va., and a clergyman of the Presbyterian Church), whose death occurred in New York, October, 9, 1854, Robert (deceased), a druggist in Philadelphia, William T. Agnes, deceased,  George N., a merchant and wholesale druggist, formerly of New Orleans and now of Philadelphia, Robert, deceased, James, cashier of Adams Express Company, Charles S., deceased. 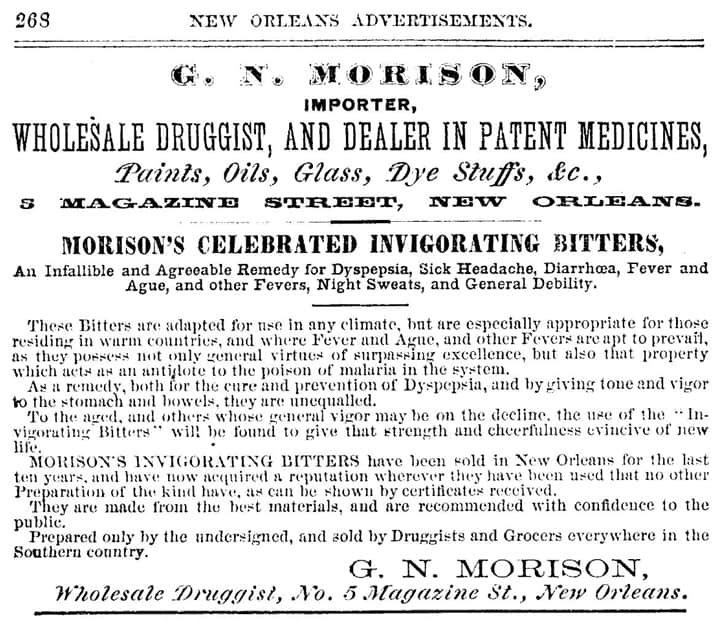 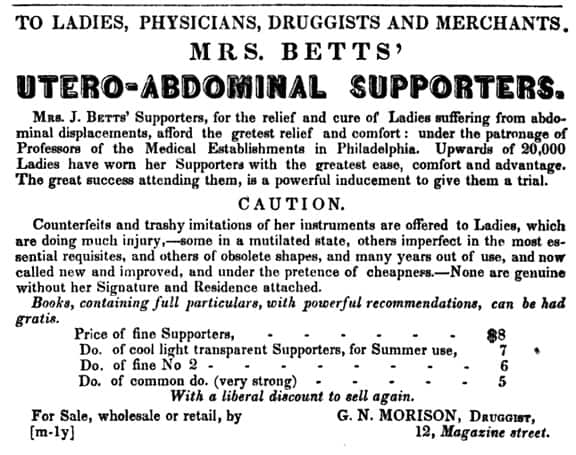 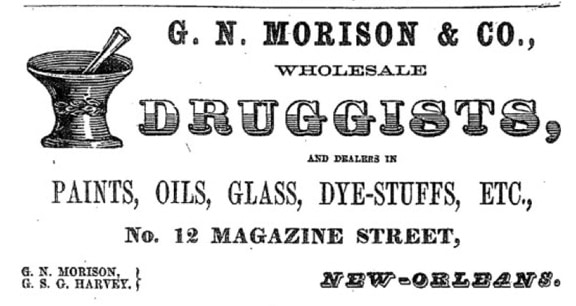 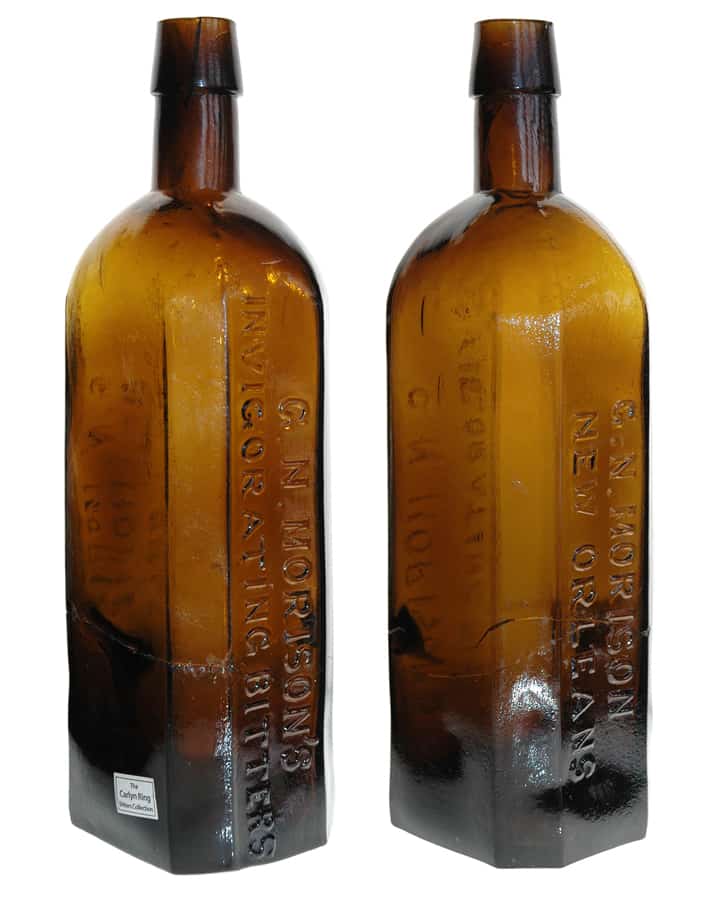 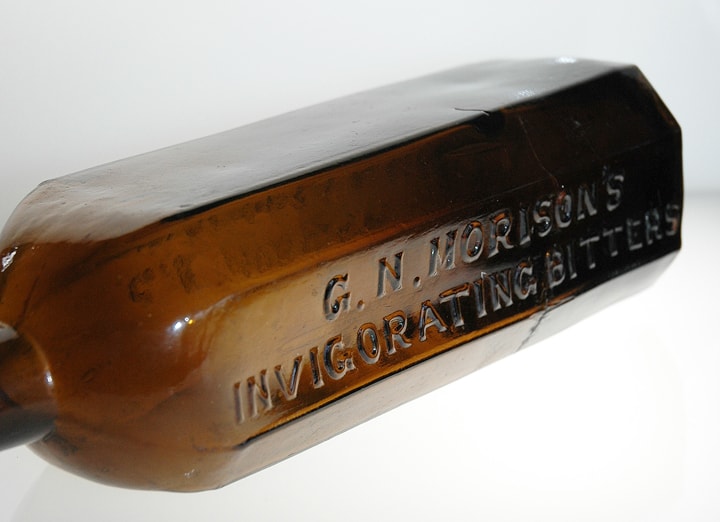 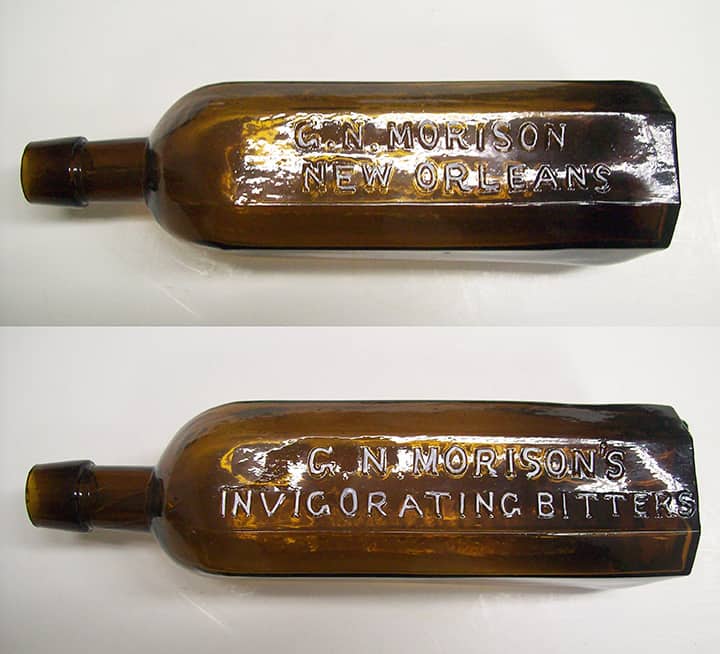 Ferdinand Meyer V is a native of Baltimore, Maryland and has a BFA in Fine Art and Graphic Design from the Kansas City Art Institute and School of Design. Ferdinand is the founding Principal of FMG Design, a nationally recognized design consultation firm. Ferdinand is a passionate collector of American historical glass specializing in bitters bottles, color runs and related classic figural bottles. He is married to Elizabeth Jane Meyer and lives in Houston, Texas with their daughter and three wonderful grandchildren. The Meyers are also very involved in Quarter Horses, antiques and early United States postage stamps. Ferdinand is the past 6-year President of the Federation of Historical Bottle Collectors and is one of the founding members of the FOHBC Virtual Museum.
View all posts by Ferdinand Meyer V →
This entry was posted in Bitters, Digging and Finding, Druggist & Drugstore, eBay, History and tagged Bill Ham, bitters, eBay, Frioux, Gene Baudouin, invigorationg, Magazine, Meyer, Morison, Morison's, New Orleans. Bookmark the permalink.