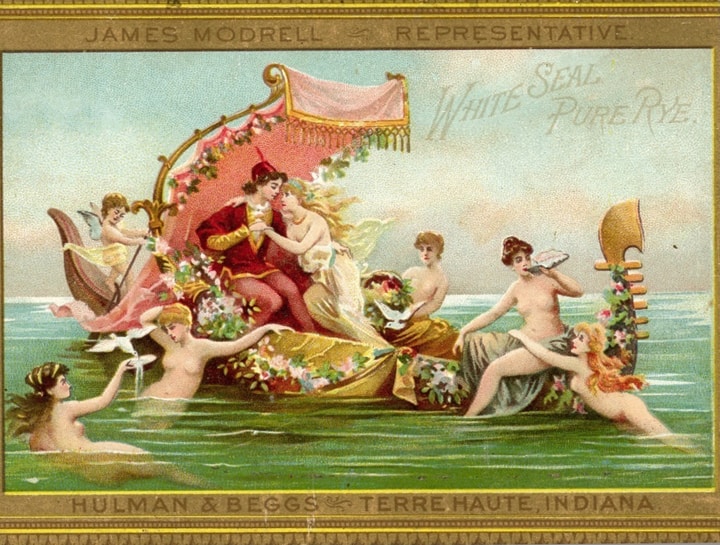 I was looking on eBay yesterday and saw this great trade card presented by Dave’s Great Cards. Dave really comes across some cool and rare items as I have a number of them in my collection. I just love the art here and have to admit, I do not know anything about the product White Seal Pure Rye or the liquor merchant Hulman & Beggs. So my thought was to find a bottle with a label and see if the label matched, in any way, the trade card art above. 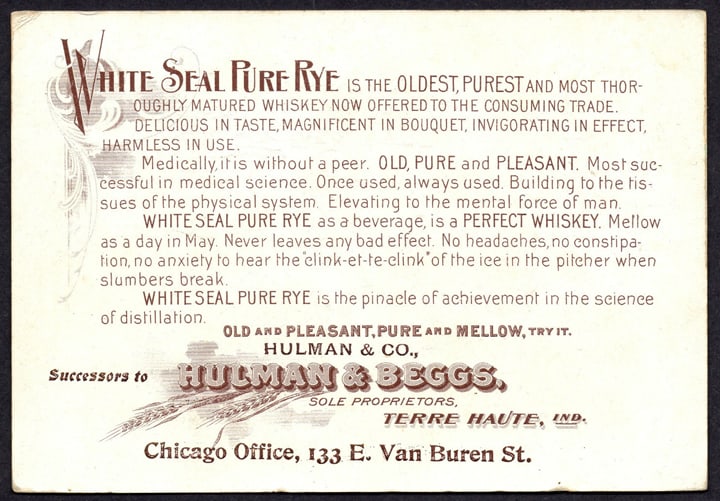 Looking online, I see a great quote by the recently inducted FOHBC Hall of Fame recipient Jack Sullivan referencing the same art, though framed in a larger advertising sign. 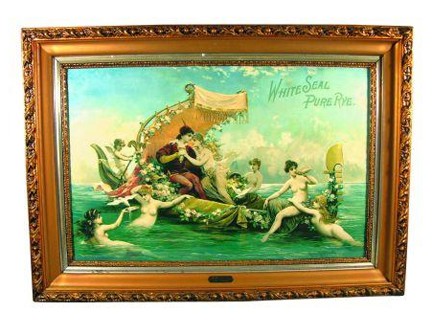 “The sign advertising White Seal Whiskey points up another frequent scheme for showing female nudity: Place the ladies in a mythical or Oriental scene. Here a pair of young lovers — she bare breasted — are being escorted down their river of love on a flower garlanded boat by no fewer than five totally nude river nereids. This was a very popular bar sign from the Hulman and Beggs Company of Terre Haute, Indiana. Herman Hulman, progenitor of the famous Hulman motor racing family, was in the liquor business for many years but his alliance with John Beggs apparently lasted only from 1894 to 1896.”

Here is where it gets interesting as Jack’s comment and other references also talk about the name Hulman and motor racing. 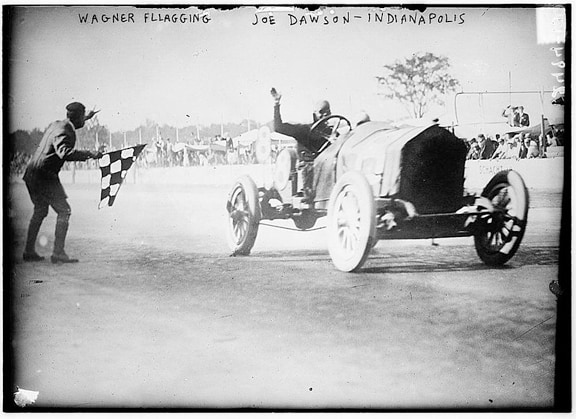 Hulman is probably best known for buying the dilapidated Indianapolis Motor Speedway from a group led by World War I flying ace Eddie Rickenbacker immediately after World War II. Influenced by three-time Indy 500 winner Wilbur Shaw (who became the track’s president in the early years of the Hulman regime), Hulman made numerous improvements to the track in time for the race to be held in 1946.

Following Shaw’s death in a plane crash on October 30, 1954, Hulman stepped into his soon-to-be-familiar role as the “face” of the Speedway. He followed the tradition of launching the Indianapolis 500 with the command, “Gentlemen, start your engines!” Into the 1970s, despite the fact he’d given the command so many times before, he would always practice it extensively beforehand, and on race day, he would invariably pull a card containing the famous words: “GENNNNNTLEMENNNNN, STARRRRRT YOURRRRRR ENNNNNNNGINES!” from the pocket of his suit as he stepped to the microphone. Luke Walton, who with Wilbur Shaw had founded the Indianapolis Motor Speedway Radio Network, was for many years a sportscaster and worked annually with Tony (and later with Mrs. Hulman) to ensure each word was delivered with the proper emphasis.

There is abundant information online including text mentioning their names from the local libraries:

The initial board consisted of William Riley McKeen, Herman Hulman, Deloss W. Minshall, Josephus Collett, Willard Kidder and Robert Nixon, president of the company. Located at the southwest corner of First and Wilson streets on the same grounds used by pioneer Terre Haute distillers Ezra Smith, Horace Button and Alexander McGregor in the 1840s, the distillery was managed by Crawford Fairbanks and John H. Beggs.

TERRE HAUTE — The second annual Licensed Saloonkeepers’ League of Indiana meeting was staged in Terre Haute on Sept. 14-16, 1893. After the delegates met in Bindley Hall, they were entertained at a banquet at the wholesale liquor firm of Hulman & Beggs which had just moved into its new five-story building, 25-27 Ninth St. at the corner of Cherry Street.

The Terre Haute Express newspaper described the firm and the event: “Herman Hulman Jr. and J. E. Beggs are both young men, the former being 27 and the latter 31 years of age. On Oct. 5, 1892, these young men formed a partnership and relieved Mr. H. Hulman Sr. of the ownership and management of the wholesale liquor department of H. Hulman.

“In assuming the great expense of entertaining their friends with such a banquet, the firm had shown their appreciation of the retailers of Illinois and Indiana.

“The large room at the rear of the offices on the first floor was tastefully decorated with flags and bunting and converted into a temporary banquet hall. The lunch was served by Caterer Sage, who was under instructions to spare neither pains nor expense in preparing a menu in harmony with the numerous other progressive strides made by Hulman & Beggs.” [Terre Haute Express 1892]

Question #1: Does anyone have a bottle and or labeled example of the White Seal Pure Rye or the the Hulman & Begg’s Wild Cherry Biters? 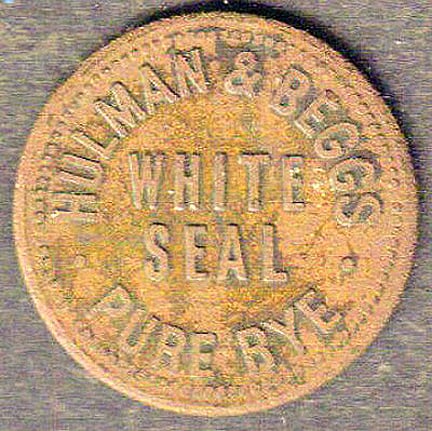 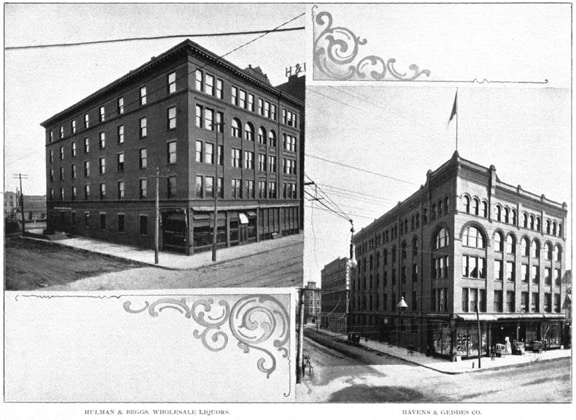 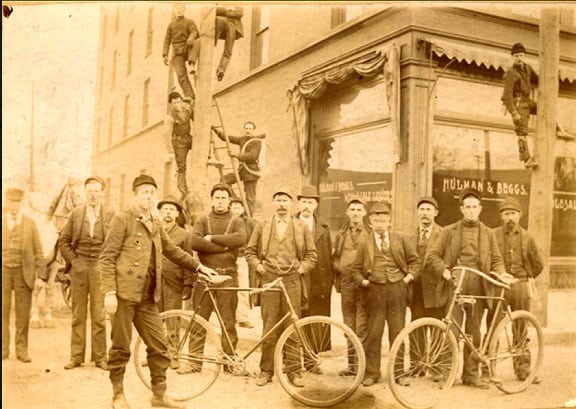 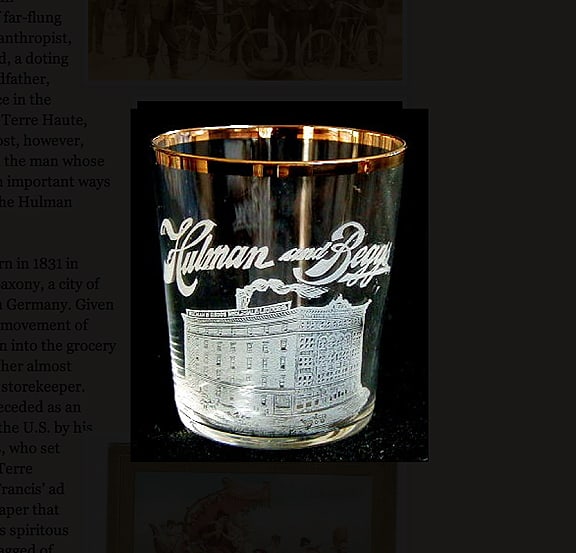 Hulman and Beggs (arched script) / (picture of a large building with horses and carts in the foreground and a sign on the roof that reads: HULMAN AND BEGGS WHOLESALE LIQUORS) – pre-pro.com