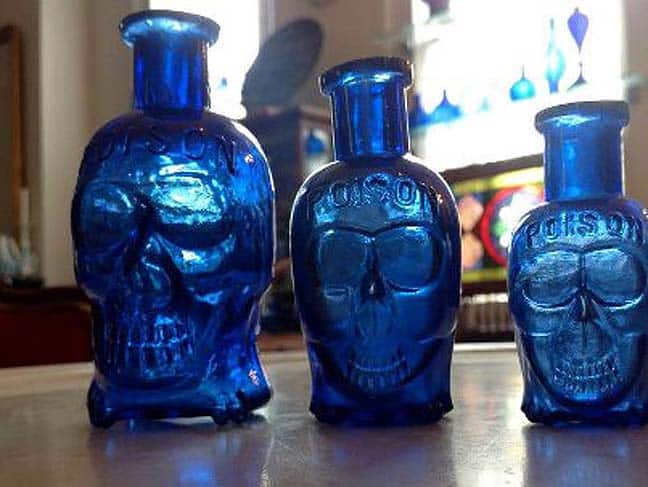 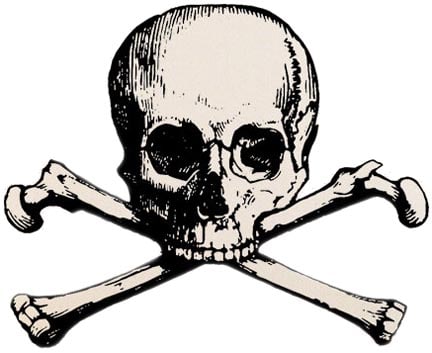 A skull and crossbones is a symbol consisting of a human skull and two long bones crossed together under the skull. It is generally used as a warning of danger, usually in regard to poisonous substances, such as deadly chemicals.

Now that halloween is past, and after Dr. Charles Aprill from New Orleans posted the above poisons for our frightful delight, I circle back to look at this wonderful bottle.

Since the 1850s, the skull & cross bones has been the accepted symbol warning users of a poisonous substance. Poison bottle collectors love the bottles with the skull and crossbones embossed. In the 1700s the “Skull & Crossbones” flag was first flown by French pirate Emanuel Wynne.

The handling of poisonous substances has always been a matter of concern both here and abroad. Various symbols have been used over the centuries to indicate dangerous substances. The Danes used + + + on their ceramic containers to warn the unwary.  Sometimes apothecaries would display skeletons when they were compounding poisonous materials. As early as 1829, New York state required the clear labeling of containers whose contents was poisonous.

Beginning in the 1870s here in the United States uniquely designed containers in bright cobalt blue began appearing. In order to warn the user of the dangerous nature of the contents, the outside of the bottle was covered with a series of raised bumps, dots, ridges, or lattice work. The purpose of these features was that should an unsuspecting victim mistakenly grab a bottle in a dark or dimly lit room he could tell by feel that the contents should not be ingested. Various unusual shapes (triangular or hexagonal) were widely adopted to store poisons, but the skull and crossbones had a long history and appealed to a primitive part of our conscience.

“In the 1700s the “Skull & Crossbones” flag was first flown by French pirate Emanuel Wynne.” 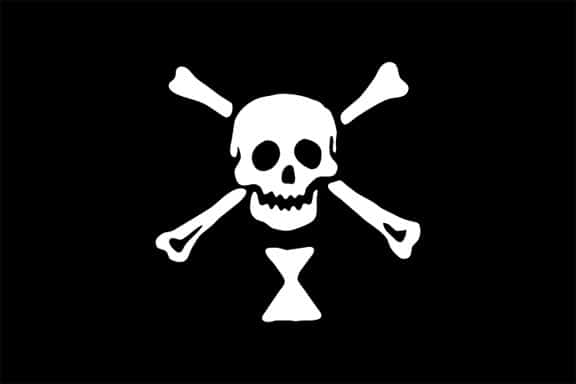 It was not until the late 1880-1890s that the skull and crossbones became a familiar site embossed on bottles. The practice continued through the 1920s when it was decided that the brightly colored bottles and symbols maybe attractive to children and harming more than helping the situation. Eventually the emphasis changed to creating containers which would be difficult for children to open. [reference John Odell] 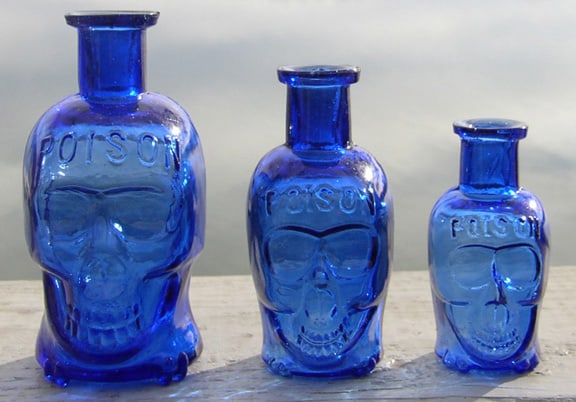 The three very rare skeleton skull bottles pictured above were patented on June 26, 1894 by Carlton Lewe of Boston, Mass. To most, these figurals have become the most famous and desired poison bottle. Each is embossed POISON on the forehead and PAT APPL’D FOR on the reverse near the base. The base of the bottle is embossed with crossed bones. Also, the reverse features a raised panel obviously for an ingredient-identifying paper label. The famous blue bottle came in three sizes, 2-3/4”,  3-l/2” and 4-l/2”. The smallest size is reported to be the hardest to find. It has been estimated that less than 100 of the rare skull-shaped poison bottles are in existence.

The Aprill image was posted on the Peachridge Glass facebook page and generated a ton of excitement as you might expect. Some of my favorite comments:

“My favorite bottle in poisons.”

“I think we all would like to dig one. A couple were found many years ago in a chemist’s shop in Wales.”

“Probably the coolest bottle ever…” 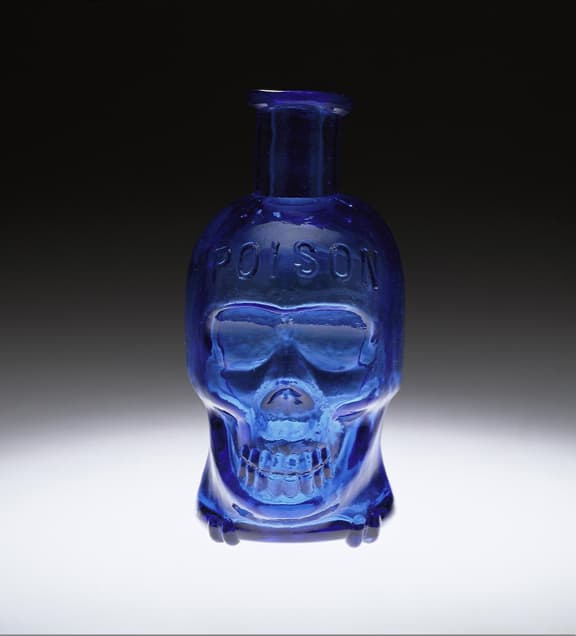 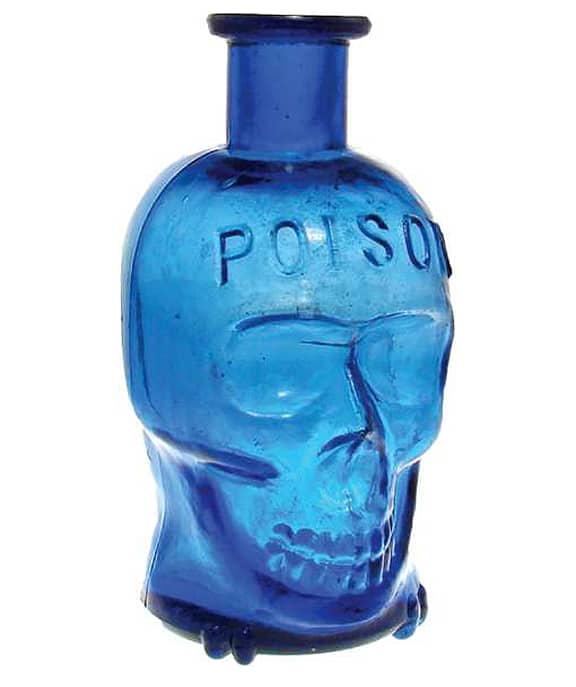 Antique skull shaped poison bottle. Still looking for my own after years of searching! – I am an Addams.. Girl. 28 years. Lives in the UK. Collects skulls, antique religious items, and eye tattoos. Feels she has connections to the Addams family. Likes Victorian styling, catholic art, and the macabre…. 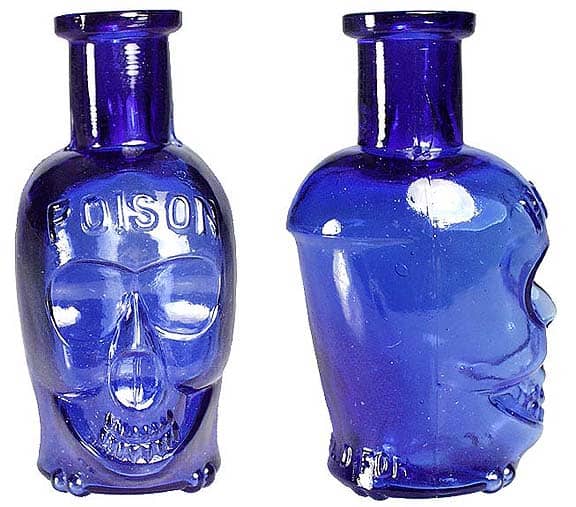 The very rare 3″ ‘middle’ size skull poison (they come in 3 sizes – small one below). Embossed POISON on the forehead, and PAT APPL’D FOR on the back label panel near the base. Deep cobalt blue color, with embossed crossbones across the base (this is the non-lettered base variant), and has a tooled lip. Sold by James Hagenbuch. – AntiqueBottles.com 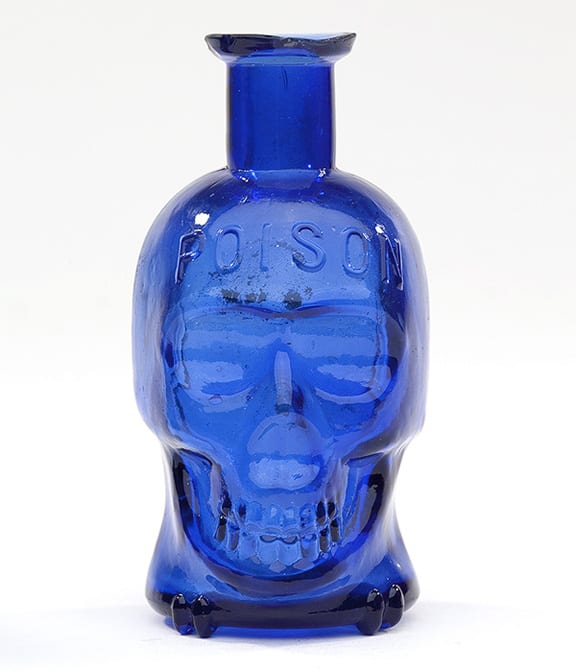 “Poison – Pat. Appl’d. For” Figural Skull, America, 1890 – 1905. Medium cobalt, in the form of a skull, tooled prescription type mouth – crossbones on smooth base, ht. 4 1/8”; (several flakes around the edge of the mouth, the largest one is approx. ½” wide on top of the beveled collar, and a bit of interior dirt or residue that would likely wash out, but no cracks or other form of damage). KU-10. The noted flakes could easily be professionally repaired, if desired. An impressive, desirable poison! – American Glass Gallery Auction #9 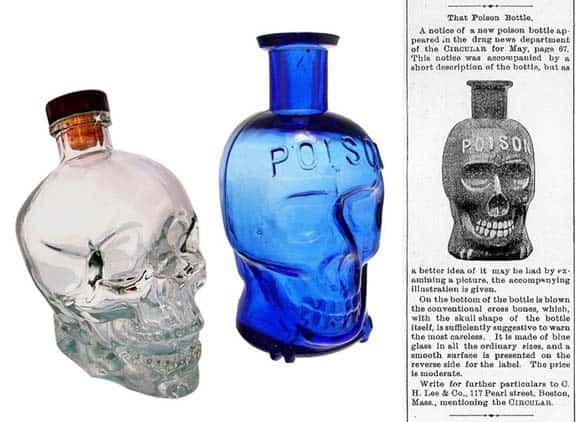 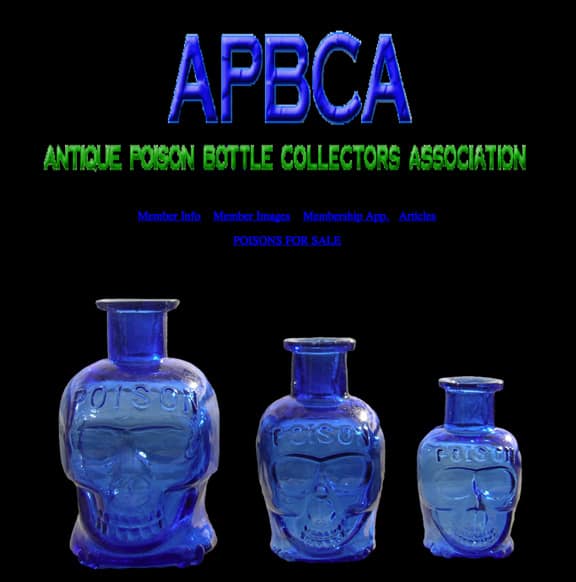 Ferdinand Meyer V is a native of Baltimore, Maryland and has a BFA in Fine Art and Graphic Design from the Kansas City Art Institute and School of Design. Ferdinand is the founding Principal of FMG Design, a nationally recognized design consultation firm. Ferdinand is a passionate collector of American historical glass specializing in bitters bottles, color runs and related classic figural bottles. He is married to Elizabeth Jane Meyer and lives in Houston, Texas with their daughter and three wonderful grandchildren. The Meyers are also very involved in Quarter Horses, antiques and early United States postage stamps. Ferdinand is the past 6-year President of the Federation of Historical Bottle Collectors and is one of the founding members of the FOHBC Virtual Museum.
View all posts by Ferdinand Meyer V →
This entry was posted in Collectors & Collections, Figural Bottles, History, Poison Bottles and tagged Carlton Lewe, Charles Aprill, Crossbones, Dustin Scott Baker, Emanuel Wynn, Francis Romanowski, John Odell, Poison, Skull, Toni Scholtz Johnston. Bookmark the permalink.