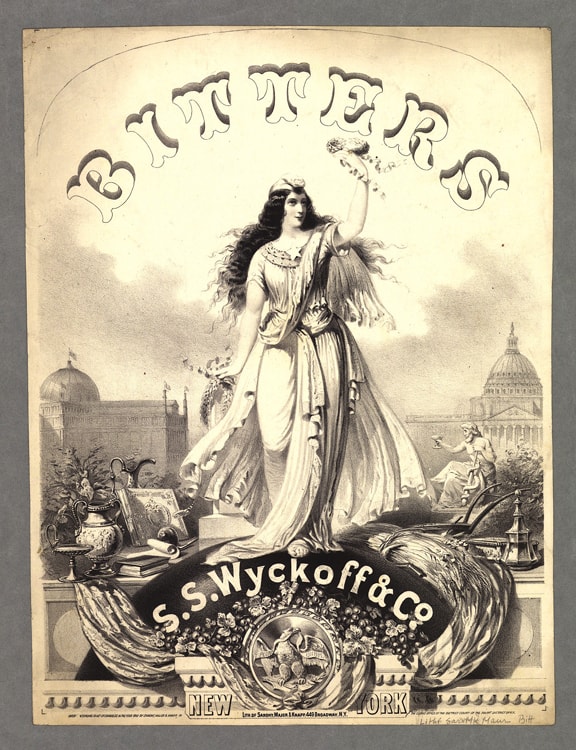 BITTERS S.S. Wyckoff & Co. New York, Sarony, Major & Knapp Lith., lithographer., circa 1861, Copyright 1861 by Sarony, Major & Knapp. From the Louis Maurer Collection. Advertising print for S.S. Wyckoff’s Bitters. Liberty, personified as a young woman in flowing robes and a phrygian cap, stands above the Wyckoff company name and U.S. flag and great seal, holding two laurel wreaths. At her feet are symbols of harvest and drinking. Behind her at right, the Greek mythic physician Asclepius holds his staff and snake in his left hand and raises a glass in his right. Behind him is the U.S. Capitol building. In the background at left is another large domed building. –  American Antiquarian Society

Sometime during the long and busy 2012 FOHBC Reno Expo, a gentleman  I can not remember his name) gave me an 8 1/2″ x 11″, folded, stapled and lightly printed (from the Internet), black and white print of an advertising piece reading BITTERS S. S. WYCKOFF & CO. I said I was unfamiliar with the piece or the bitters brand. In short order I was checking my Carlyn Ring and W.C. (Bill) Ham Bitters Bottles and Bottles Bottle Supplement books and noticed no reference within. Wow. I set this aside, talked to Bill Ham at some point and we were both puzzled by the art. 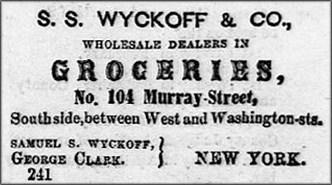 Finally last weekend, as I was working through a backlog of items, I came across this mysterious printout and studied it closer. I decided to Google the brand name and quickly came up with numerous examples of the same art which is represented at the top of this post. I also found an advertisement or two for Samuel S. Wyckoff in New York and a few address listings. On Sunday I put the art on the home page of Peachridge Glass and asked you all (we say that here in Texas) for help. 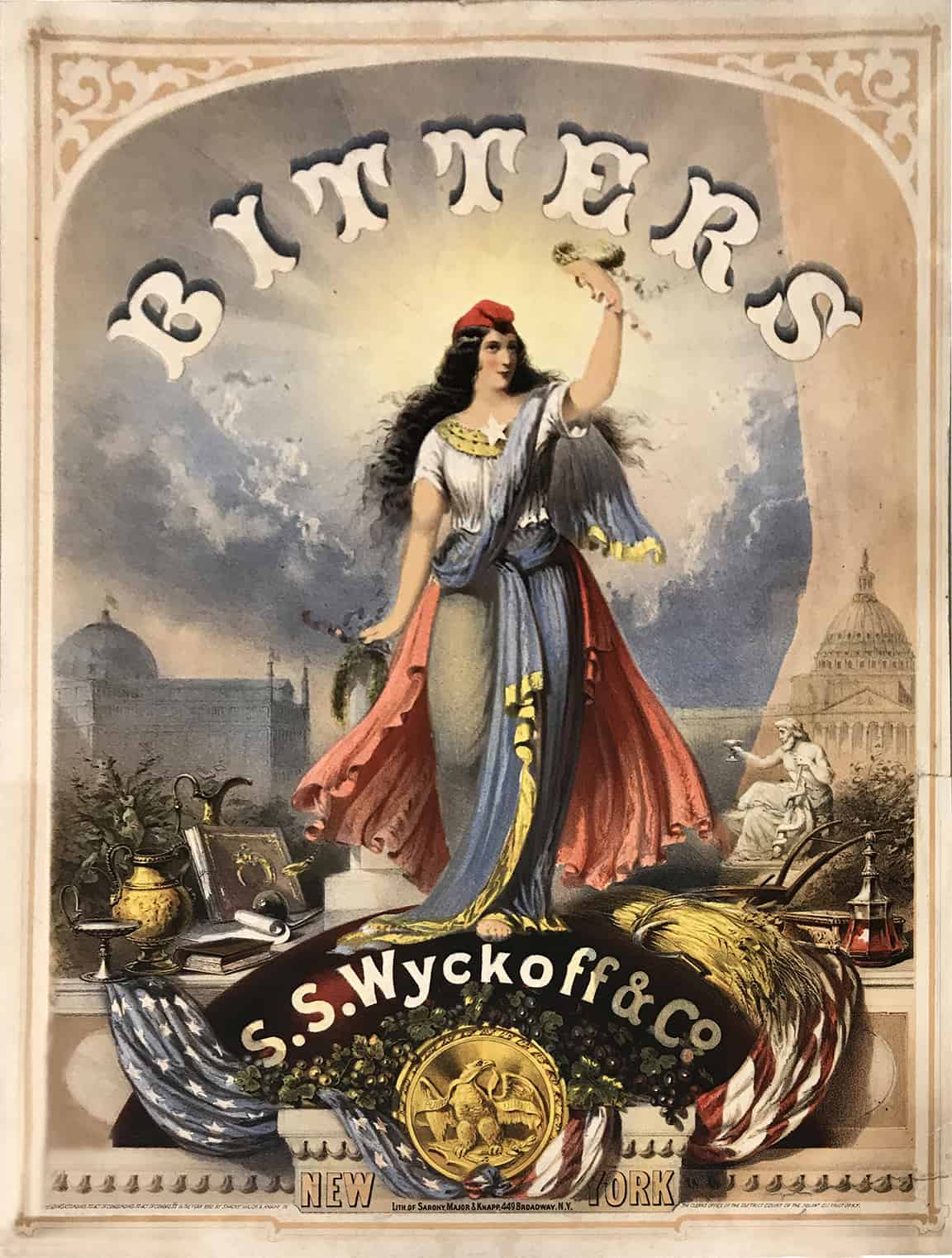 In very short order, Brian Wolff sent me a private communication linking me to another advertisement, a forum post, pictures and a document link on Antique-Bottles.net. Apparently someone had come across a bottle back in June 2009 with the S. S. WYCKOFF embossing and posted it online garnishing a few responses. These are all posted below starting off with the finders comments:

“We’re on a super tight budget, but occasionally we find a bargain…Here’s what today’s rainy wanderings of the aisles produced,…The bottle is a beautiful color,…Lauren calls it “black cherry’ (and that’s what it looks like) Shades of puce/strawberry amber I would say…very unusual with neat embossing “S. S. WYCKOFF & CO.” with a raised border surrounding it, curved around the shoulder of the bottle. Also a cool double collared gloppy applied lip. If anyone is familiar with this bottle,…please give a shout. I found it hidden behind some more common chipped and beat medicines and such,…almost passed it by till I spotted the lip. 12 dollars after the Fathers day sale discount. Thanks for looking.” Joe

P.S. I’ll have to get some better pics in natural light after this rain lets up. 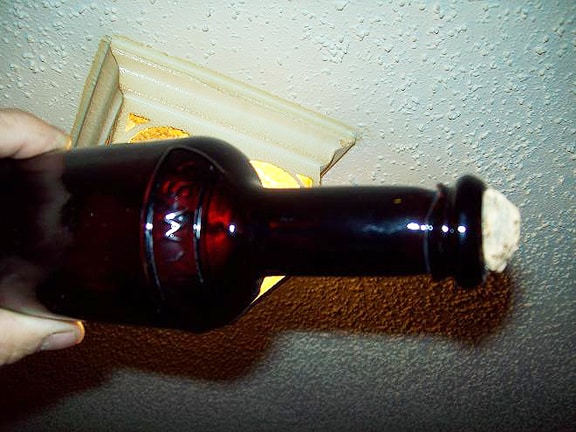 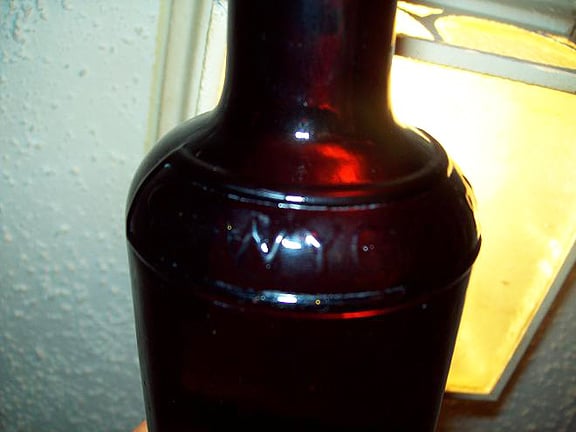 Now at least I have a bottle to look at albeit blurry and hard to read. Brian quickly contacted the owner Tuesday and received more pictures (see far below). It looks like we are off to the races on this one and have identified an unlisted labeled bitters. Stay tuned.

2nd Round of Pictures 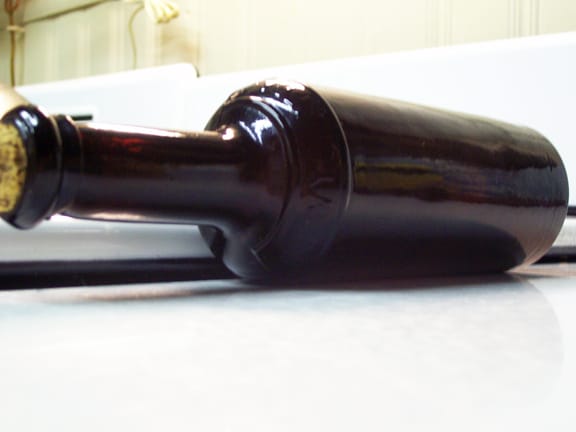 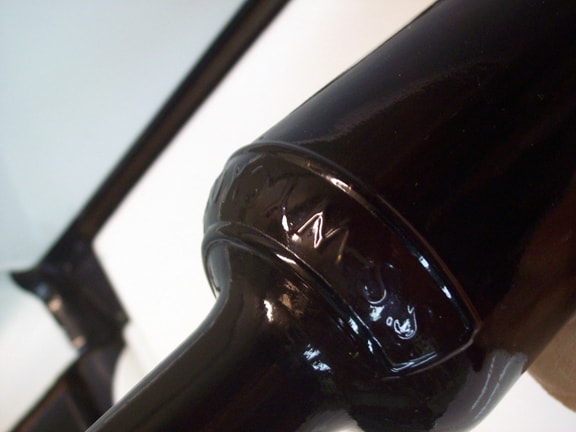 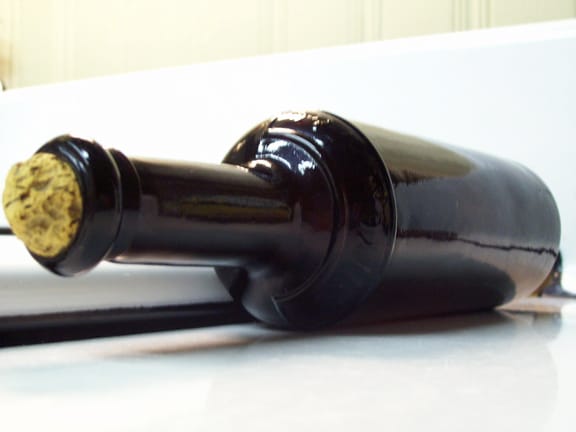 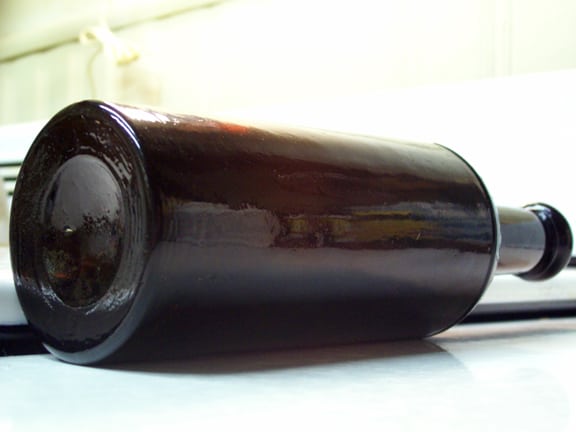 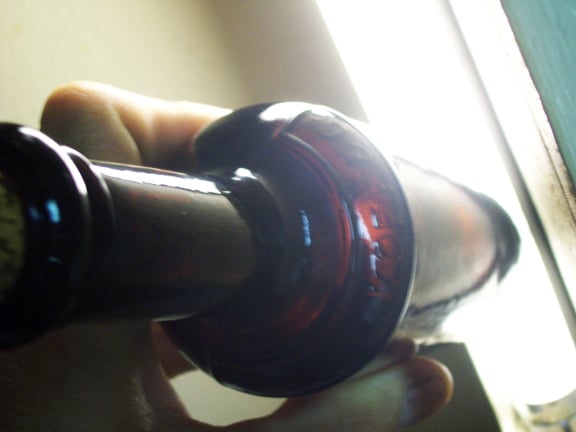 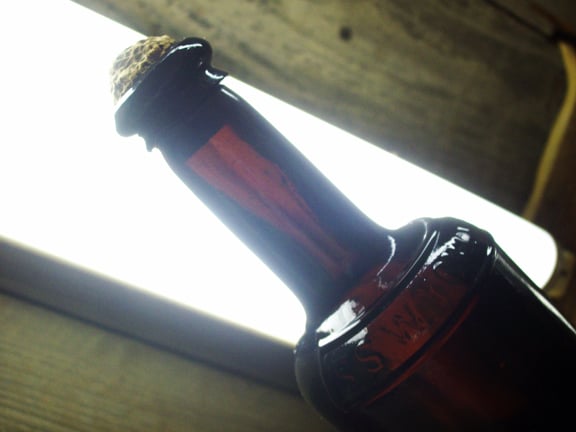 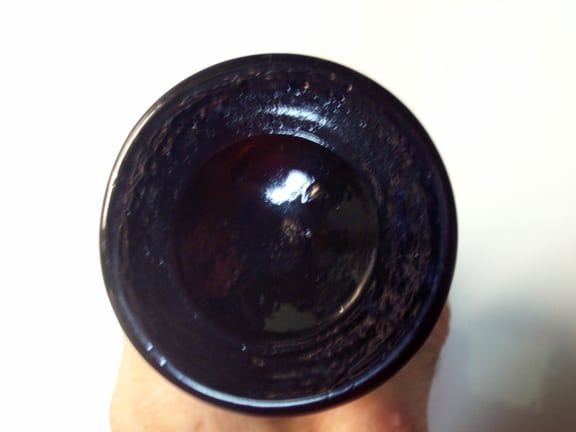 Ferdinand Meyer V is a native of Baltimore, Maryland and has a BFA in Fine Art and Graphic Design from the Kansas City Art Institute and School of Design. Ferdinand is the founding Principal of FMG Design, a nationally recognized design consultation firm. Ferdinand is a passionate collector of American historical glass specializing in bitters bottles, color runs and related classic figural bottles. He is married to Elizabeth Jane Meyer and lives in Houston, Texas with their daughter and three wonderful grandchildren. The Meyers are also very involved in Quarter Horses, antiques and early United States postage stamps. Ferdinand is the past 6-year President of the Federation of Historical Bottle Collectors and is one of the founding members of the FOHBC Virtual Museum.
View all posts by Ferdinand Meyer V →
This entry was posted in Bitters, Collectors & Collections, Digging and Finding, Questions and tagged Bill Ham, Brian Wolff, Groceries, Murray Street, New York, S.S. Wyckoff, Samuel S. Wyckoff. Bookmark the permalink.