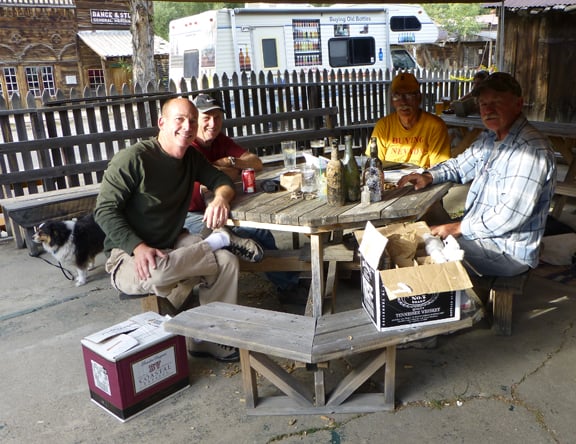 [incoming from James Campiglia] *Get a load of the RV parked behind them!

We had our officers meeting on Sunday the 26th of August. We all remained with the same positions. Ray Thompson, President, James Campiglia, Vice President and Show Chairman. Erich Weber was not present but will remain as the Secretary/Treasurer.

We had a fun time with one local enjoying learning about bottles and listening to us and plans to join the club later. Others stopped by to glance at some of the dug bottles and others we were showing.

We all dug for nearly a week in Virginia City on the property right out of the city limits across from Alder Gulch where all the mining took place going back to the early 1860’s. We only found one outhouse and the big bone pit dump that must of been a creek or stream at one time where the water would rise and fall and the artifacts became cemented together with clay surroundings. There’s still more land to image and hope to find more but we also have other pending projects, digs, to move onto.

Other artifacts found: Many old buttons, lots of old iron and horseshoes and miners shovels and picks very worn out. 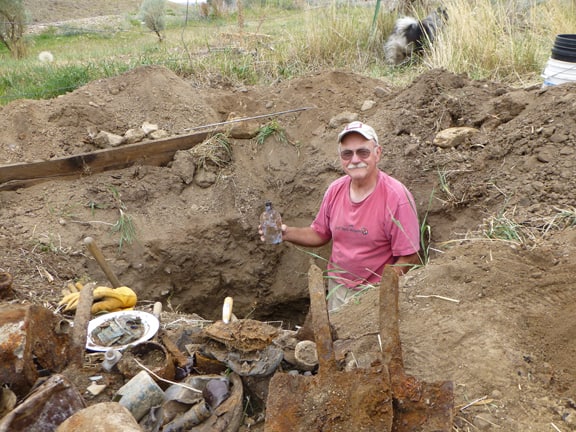 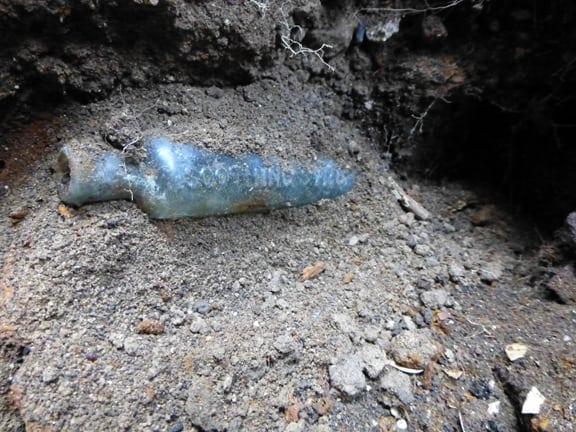 Ferdinand Meyer V is a native of Baltimore, Maryland and has a BFA in Fine Art and Graphic Design from the Kansas City Art Institute and School of Design. Ferdinand is the founding Principal of FMG Design, a nationally recognized design consultation firm. Ferdinand is a passionate collector of American historical glass specializing in bitters bottles, color runs and related classic figural bottles. He is married to Elizabeth Jane Meyer and lives in Houston, Texas with their daughter and three wonderful grandchildren. The Meyers are also very involved in Quarter Horses, antiques and early United States postage stamps. Ferdinand is the past 6-year President of the Federation of Historical Bottle Collectors and is one of the founding members of the FOHBC Virtual Museum.
View all posts by Ferdinand Meyer V →
This entry was posted in Club News, Collectors & Collections, Digging and Finding, History, News and tagged Alder Gulch, Digging, Erich Weber, Montana Bottle Collectors Assoc., Ray Thompson, Virginia City. Bookmark the permalink.