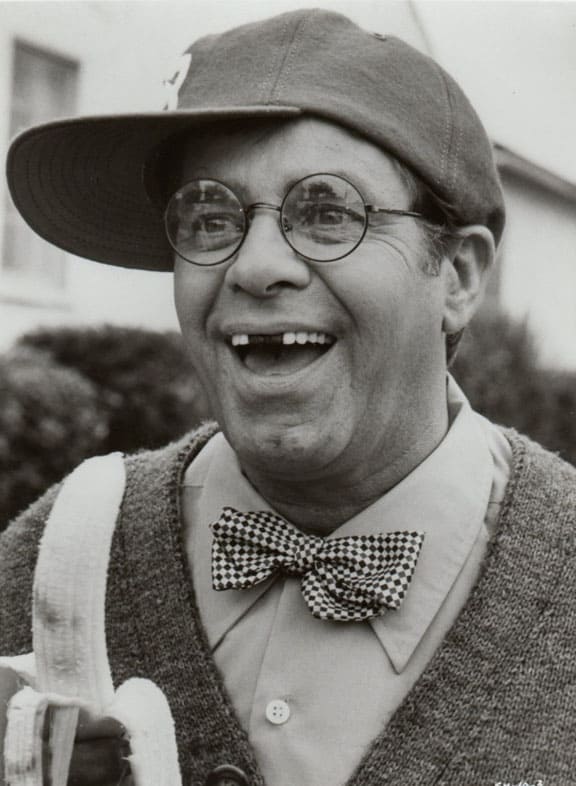 The Urban Dictionary describes Comedic Genius as “the most intensely, legit, bad-ass on the planet; a comedic genius misunderstood in his era”. In the antique bottle and glass world, where our passion rules, there are numerous characters that I have had the pleasure of meeting. This is without a doubt. It is when you mentally line up the bottle people you know, what they collect and how the interact with others, that you start noticing that some people, more than others, really jump out. 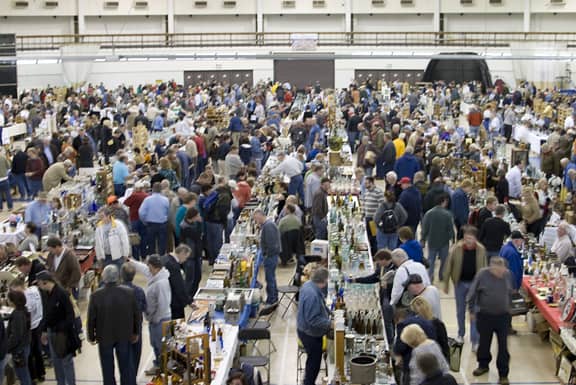 In 2003, my first year with tables at the great Baltimore Antique Bottle Show, there was this fellow behind Elizabeth and myself that chattered, smiled, joked, knew every body and was wheeling and dealing more than anything we had ever seen at any type of show. I even bought a yellow Halls Bitters that was really nice from the ‘talkin and jokin salesman’. 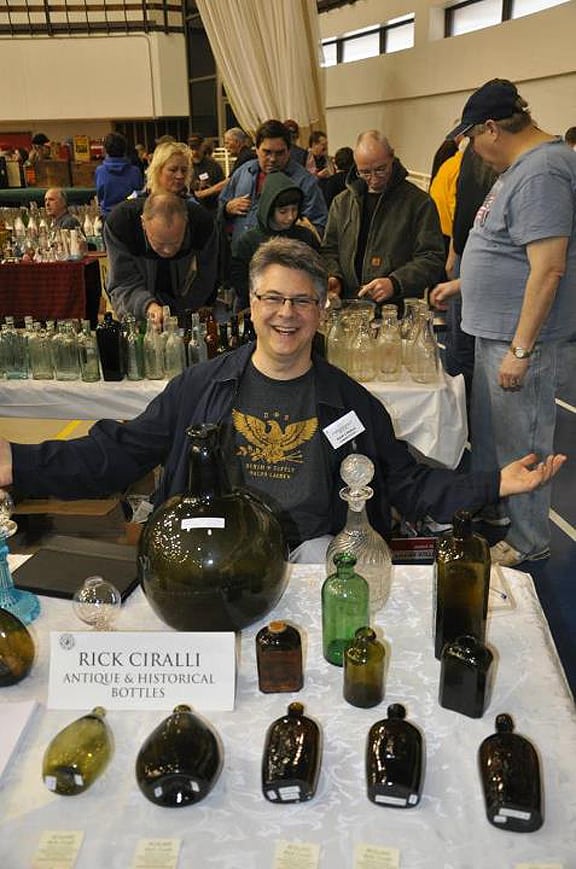 Hey…I got my table back….

Well next year he was not at the table. Turns out that he didn’t send his renewing contract in on time and with the Baltimore Club, you do that, you lose your spot, and boy was his table in a premier location near the entry doors to the massive show. My wife said to me, where is that real talkative guy? We actually missed him! We found him later in a back area of the cavernous room wheeling and dealing and cavorting around as usual. It was then, that we realized that this guy was a player. He somehow got another table though he could have gone to the back of the waiting list for dealers to get tables at the sold out show. Of course by now, you know I am talking about the good looking, charming, humorous, wheeler and dealer, family man and authority of early American glass, Rick Ciralli from Bristol, Connecticut. 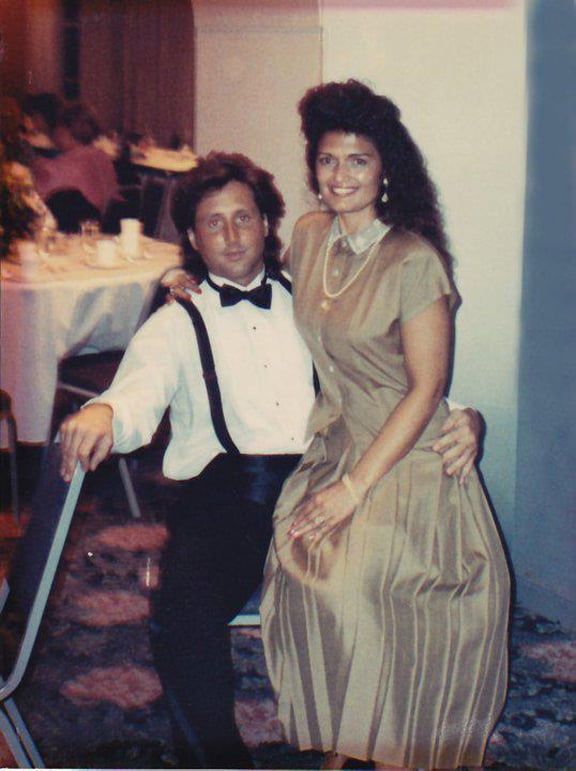 I pick on Rick here because of his recent comment to an earlier picture of us (see above) on facebook where he said something about a Chippendale Dancer which made me smile; but…..I thought, how can I get him back…. 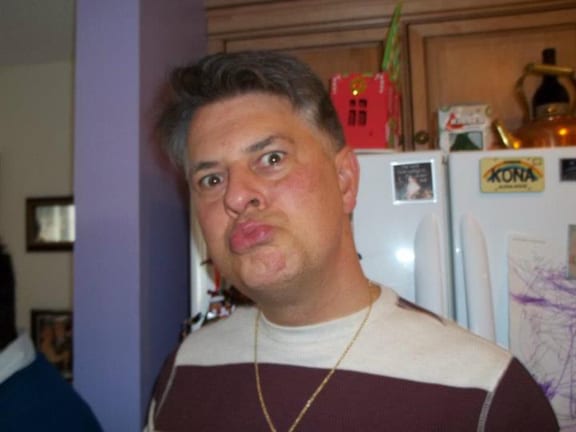 Mugging for the camera. Interesting that he usually has this face when pondering a question about Connecticut glass.

Here are some fun pictures of Rick. It should remind us that it is not only the great bottles and glass, the history and the stories that we cherish, this is also about the people that populate our wonderful glass world. We all know this. Make no mistake, Rick is a great guy. You will not meet a finer comedic dude that can switch hats at a moments notice to be one of the most knowledgeable glass guys I know. 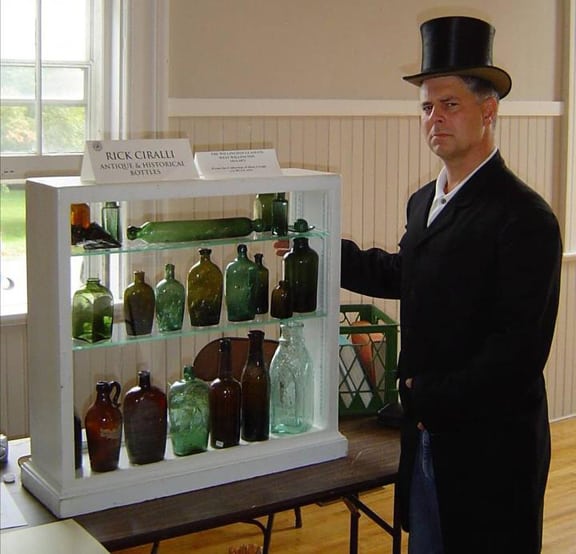 Rather normal attire when Rick gives a Connecticut glass talk 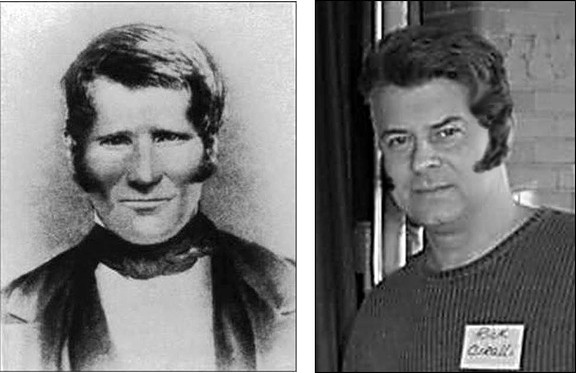 “Who believes in this reincarnation junk anyway?” – Brian Wolff 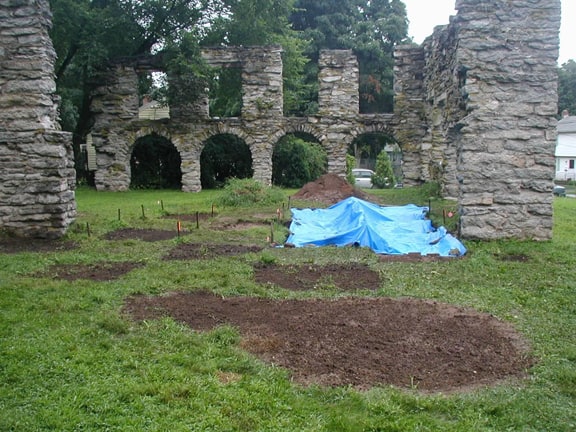 Rick says…My wife caught me kissing a sunburst flask…That’s me sleeping under the tarp. 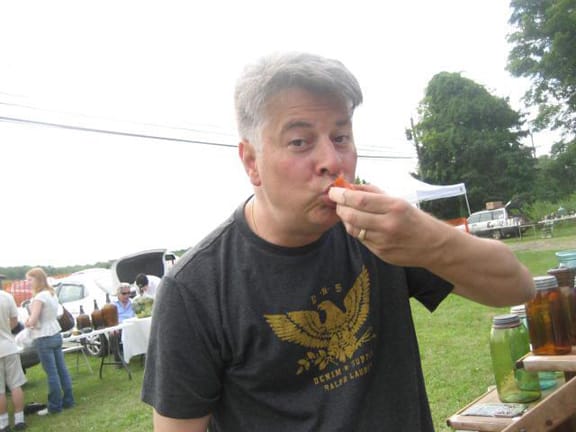 Not too many people can still look good eating. 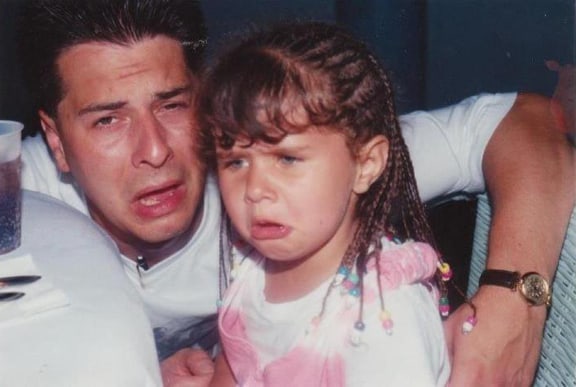 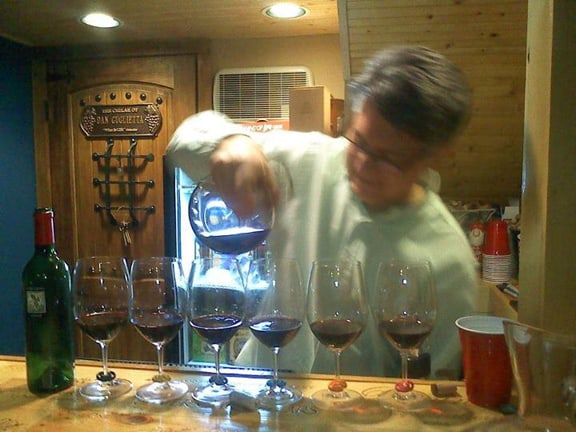 Ricks cultured side. Unfortunately he was the only person at this ‘tasting’ event which does present another question. 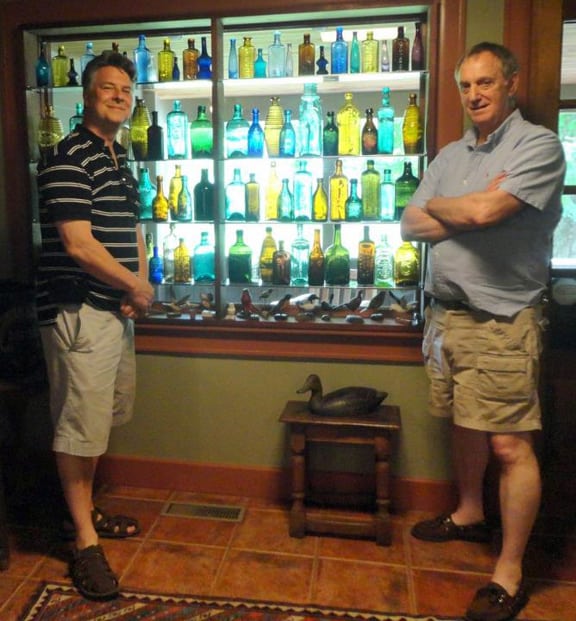 A friend of everyone, Rick with Charles Flint 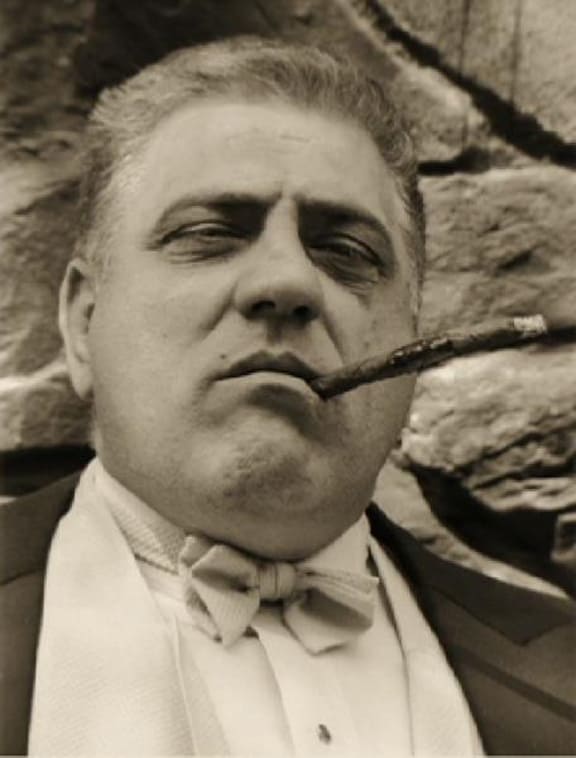 Rick’s response when we were looking for some ways to stop eBay fraud. Rick wanting to put one of his New Jersey contacts on the job. 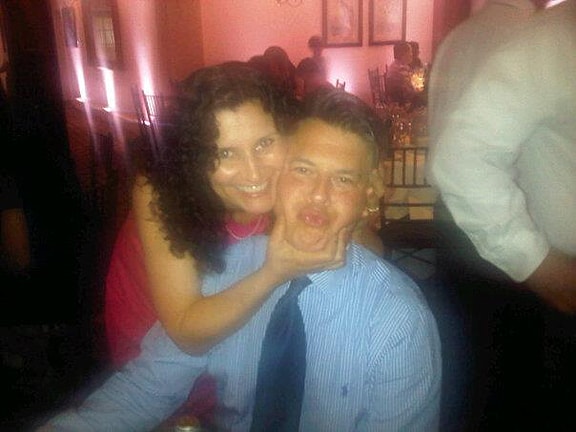 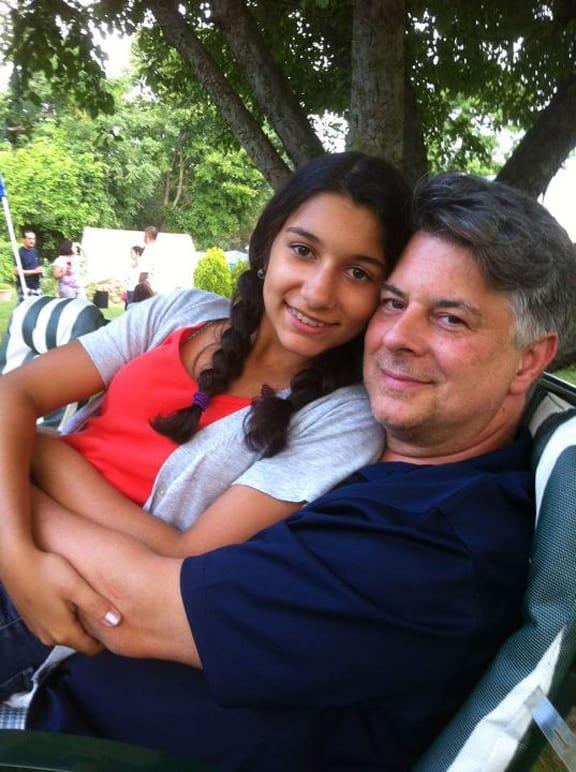 Hangin with my baby 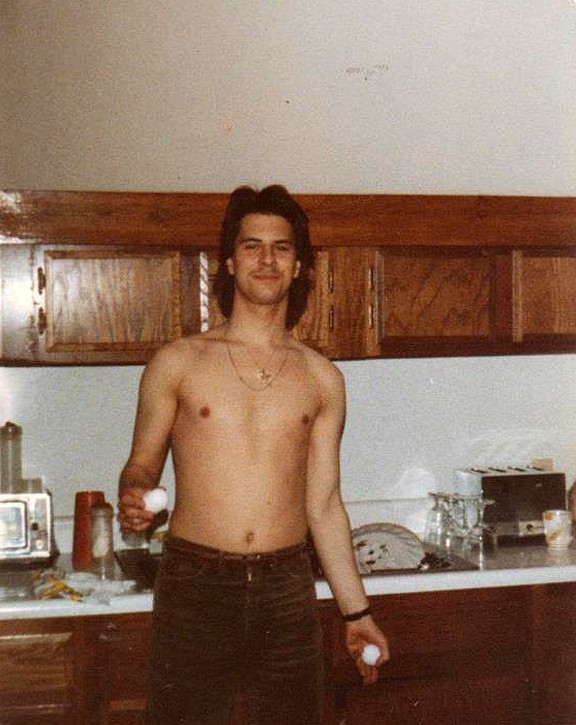 Some time ago, topless juggling 2 eggs at once…amazing even to this day

Ferdinand Meyer V is a native of Baltimore, Maryland and has a BFA in Fine Art and Graphic Design from the Kansas City Art Institute and School of Design. Ferdinand is the founding Principal of FMG Design, a nationally recognized design consultation firm. Ferdinand is a passionate collector of American historical glass specializing in bitters bottles, color runs and related classic figural bottles. He is married to Elizabeth Jane Meyer and lives in Houston, Texas with their daughter and three wonderful grandchildren. The Meyers are also very involved in Quarter Horses, antiques and early United States postage stamps. Ferdinand is the past 6-year President of the Federation of Historical Bottle Collectors and is one of the founding members of the FOHBC Virtual Museum.
View all posts by Ferdinand Meyer V →
This entry was posted in Bottle Shows, Collectors & Collections, Early American Glass, Facebook, Humor - Lighter Side and tagged Baltimore Antique Bottle Show, Charles Flint, comedic, comedy, Elizabeth, genius, Humor, Jerry Lewis, Rick Ciralli. Bookmark the permalink.