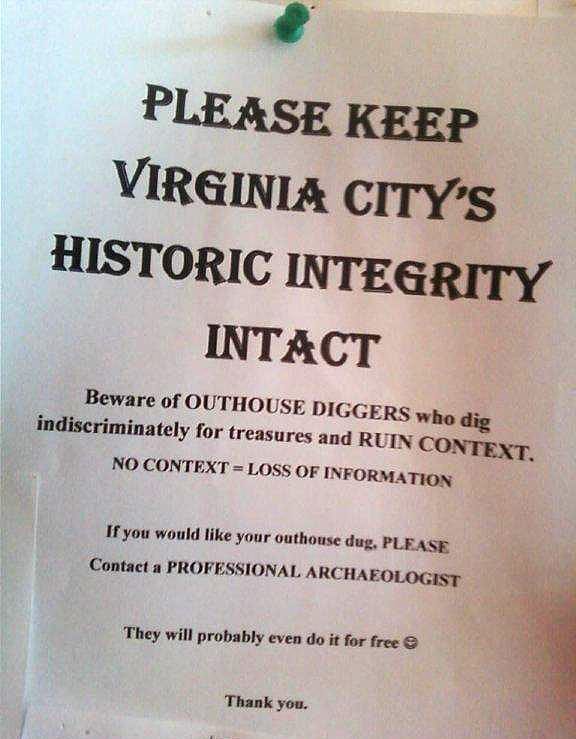 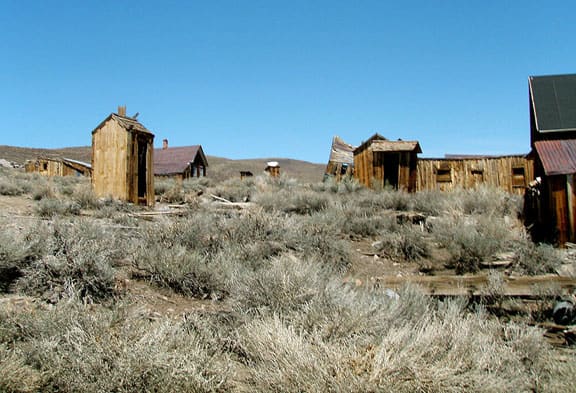 On Friday Aug 24th, a friend and I went to the state run historical society (McFarland Curatorial Center) in Virginia City, Montana to see what they could show us that had been dug in Virginia City. And to see what knowledge they had on the artifacts found in outhouses and in general to say hi and explain that we have like interests. I later learned we do not have the same interest! The archaeology woman was gone to a seminar. There was a small box of relics on a table so I asked questions about these items that I associated with being found in an outhouse. The guy we met with did have some info and was able to tell us that some bones in the box were of an ox (I knew that). I told him about bottles and by the second sentence I felt that I had him lost. We were not to touch these artifacts (perhaps the DNA would of been ruined) but I touched anyways. He was cordial and gave me some area info. I am told by locals that the archaeology woman does not like us, yet has never met us or has not taken it upon herself to come see us which is an open invitation I gave to others in this state run center. We dug all day Friday and continued that weekend but no state workers stopped by.

Those that I invited, once in an outhouse I am sure would not be able to climb back out. Perhaps that is why they didn’t stop by after I let them know I would loan them a shovel so they could show us their skills. I feel the shovel might of been a threat since they use tweezers, toothpicks, and toothbrushes to excavate old excrement.

I still am in disbelief about this story that was told to me by one of the state guys” “we get calls when the water company hits some artifacts or when a wall is being shored up. We then go out and dig 1 by 1 foot squares a few inches at a time until we find the needed artifacts. One hole we feel was an outhouse had a burlap bag with something hard like metal in it. So I asked, “what was in the bag?”, “I don’t know we were done with the project at the 3 foot level so buried the hole!”, “We had dug all we needed by that time”. He also said they dig seeds on the top soils of the outhouse and can tell what local foods were eaten by this. Seeds float to the bottom not the top! The depth or other important artifacts will never be known now that they completed what they needed to do. (Or the budget permitted).

Take a look at the attached poster (see above) which is now hanging in the local post office (and maybe other places) behind glass after having been approved to be hung. I am still trying to find out who hung this. This nonsense just makes me work harder to find bottles on private land in and around Virginia City. Where we are currently digging in a field is outside city limits and I wish they had spent a week or so digging and finding the small amount we did after a lot of effort. Apparently they feel we charge money to dig outhouses which I don’t know of anyone being able to pull that off!

I would sure like to see them go find some of the outhouses in fields we search! Big nasty trash dumps with bones, tin, etc. and a chance of a rattlesnake is all we have found lately. The one outhouse last Monday had some common bottles and Chinese relics. I offered to donate anything they might want to display but learned there is no display or way of educating the public as to what they have found. I asked where the items are and got the same darn answer I get from any state run organization or museum in regards to bottles “In boxes in a room not accessible!!!!!!!!!!”

Thanks for posting that for me. Others might as well know how we are not liked by the states.

Tried to meet with the archaeology mgr. girl. Doors all locked at state building, but people inside doing something. Sign says make an appointment. I still need a phone number to do this. After talking to others they agree we have done nothing wrong, they love us in Virginia City (talked to other business owners, etc) and its very childish whoever put this sign up there and allows it to hang. Last week I went and tore their sign down. Put up a bunch of my business cards in place. Its just a bulletin board not the locked one I thought, but still inside the post office. I saw more of these posters around town too! My friend, not Reggie with OuthousePatrol but a younger friend and I who enjoys the bars and drinks ventured up to the other bar. Out on the bench is where people hang out to smoke and we stopped to say hi to a few we have seen around town before. When they asked “what are you here doing again” and Gabe said “digging for bottles in outhouses” a lady got up and left. We didn’t think much of it but a little while later found out she is Kate the state archaeologist! She will not talk to us we were told. She went in to hang with a rough looking man and I decided to leave it alone but Gabe was enjoying the strong rum and cokes more than I so went to try to talk to her. He let her know we have the same interests and just want to learn more of what they do. The male friend told him to get lost- but in not such nice words and we had better get out of town we are not wanted. Ok this is too much! I wanted to then go over but I hadn’t been in a bar room brawl in years, or I guess never, but it sounded like maybe it would make the papers “Outhouse Diggers don’t just kick cans…or OuthouseDiggers don’t take no S**t!????”
Well Gabe tried to talk to her once again and invite her to come dig but I see this will never happen. The state will remain separated from other humans not on their level. A lady friend wants me to call her friend, the lieutenant Governor. Perhaps he can do an investigation as to what is going on. All that we talked to in town basically has had their business harassed and any progress stopped for years due to this state funded deal not allowing anyone to do anything. In Virginia City many buildings have old time displays showing life in the stores in the 1800’s. One building is in shambles. The lady has waited 3 years for the state to set up a display that she is more than capable of doing as runs a very fine gift and book store there. The large crane, one of 5 known in the World, was cut up and salvaged and still everyone is amazed the state workers took that upon themselves to do, with or without approval on a higher level. The crane was an amazing focal point by old mining equiptment in Nevada City (the other state run old town outside of Virginia City).

We will move on but not after letting others know that we tread light on land, fix it better than when we started when we can, and we are not paid to dig outhouses. I have called the local paper for an interview so other can learn more about us and the historic research that we do. If the local paper does a story on us i will send it in here! I am running nice big display ads to buy bottles and that we will pay to dig your outhouse. The many donations from OuthousePatrol.com that we gave to the Firemans Ball for this next weekend, Sept 8th, will also put our name out there even more. Nearly everything we dug is being dontated for the silent auction.
We have made display with old horseshoes, miners shovels, etc. that we found in holes and at a blacksmith shop. We must of found 200 horseshoes now from the 1870’s to 90’s period we figure, although no expert on these shoes.
Pics of our digs, the town, and some historical info. will get posted on our OuthousePatrol.com probably next week as soon as I get some time.

Heres’s a couple pics for you, or the site. The big bone pit was a pain. Full of rocks and tin and broken bottles, but not many broken but we all agreed the toughest dig we had ever had.
Thanks,
James
http://www.jameschips.com
http://www.outhousepatrol.com/ 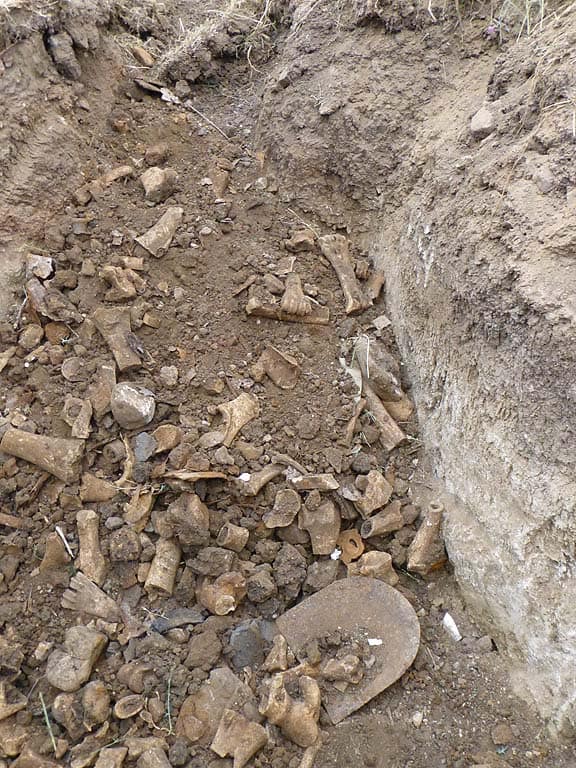 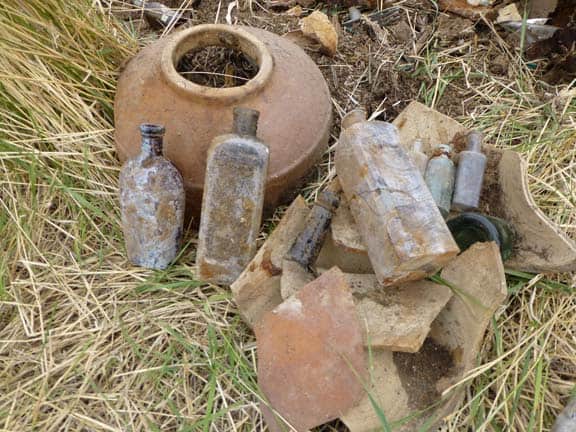 Ferdinand Meyer V is a native of Baltimore, Maryland and has a BFA in Fine Art and Graphic Design from the Kansas City Art Institute and School of Design. Ferdinand is the founding Principal of FMG Design, a nationally recognized design consultation firm. Ferdinand is a passionate collector of American historical glass specializing in bitters bottles, color runs and related classic figural bottles. He is married to Elizabeth Jane Meyer and lives in Houston, Texas with their daughter and three wonderful grandchildren. The Meyers are also very involved in Quarter Horses, antiques and early United States postage stamps. Ferdinand is the past 6-year President of the Federation of Historical Bottle Collectors and is one of the founding members of the FOHBC Virtual Museum.
View all posts by Ferdinand Meyer V →
This entry was posted in Digging and Finding, History, News and tagged artifacts, Digging, Historical, James Campiglia, McFarland Curatorial Center, Montana, outhouse, Outhouse Patrol, Post Office, Society, Virginia City. Bookmark the permalink.