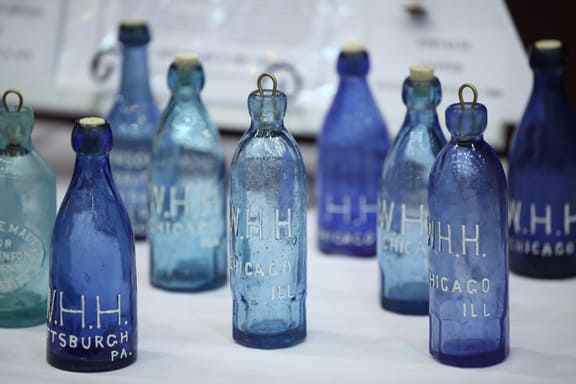 HutchBook Phase II, the Hutchinson Bottle Directory, launches at HutchBook.com on August 1, 2012!  A powerful new “Hutchinson Search” engine is the gateway to catalogued information about over 17,000 different Hutchinson bottles.  Detailed data on bottles utilized in over 35 countries, states, territories, and provinces will be accessible initially, with all remaining data scheduled to be added during August, 2012.  Users will also have access to numerous pre-defined, printable lists of Hutchinson bottles from specific countries, states, territories, and provinces, plus lists of bottles in popular collecting categories such as colored and picture Hutchinsons.  The database is continually updated to ensure collectors, archaeologists, historians, and other interested users have access to the most current and accurate Hutchinson information available.  To access these new HutchBook features, click on the “Bottle Directory” link in the left side navigation bar on this page.

The launch of HutchBook Phase II also signals the start of Phase III, the inclusion of all available Hutchinson bottle images.  A small sampling of images will be on-line in August, with thousands more scheduled for posting in months to come.

The Hutchinson Bottle Collectors’ Association’s prestigious “Hall of Fame Award” recognizes individuals whose lasting contributions have encouraged the growth of collecting Hutchinson bottles.  These hobby pioneers are known internationally for their extensive collections, advanced researching skills, encouraging and educating others, and authoring books, magazine, newsletter, and Internet articles.  The enduring contributions of HBCA Hall of Fame Award recipients embody the very spirit of the HBCA’s mission.

The names of the charter recipients of the Hutchinson Bottle Collectors’ Association’s Hall of Fame Award are posted on the Collecting page.

The Hutchinson Bottle Collectors’ Association’s prestigious “Honor Roll Award” recognizes individuals whose contributions are encouraging the growth of collectingHutchinson bottles.  Many of these avid collectors are contributing to the hobby’s growing body of knowledge via research and authoring books, magazine, newsletter, and Internet articles.  HBCA Honor Roll Award recipients routinely magnify their enjoyment ofHutchinson collecting by investing considerable time and energy into sharing their expertise with others.

This extensive listing recognizes individuals who are long overdue for public acknowledgement of their major contributions.  The names of the initial HBCA Honor Roll Award recipients are posted on the Collecting page:

Ferdinand Meyer V is a native of Baltimore, Maryland and has a BFA in Fine Art and Graphic Design from the Kansas City Art Institute and School of Design. Ferdinand is the founding Principal of FMG Design, a nationally recognized design consultation firm. Ferdinand is a passionate collector of American historical glass specializing in bitters bottles, color runs and related classic figural bottles. He is married to Elizabeth Jane Meyer and lives in Houston, Texas with their daughter and three wonderful grandchildren. The Meyers are also very involved in Quarter Horses, antiques and early United States postage stamps. Ferdinand is the past 6-year President of the Federation of Historical Bottle Collectors and is one of the founding members of the FOHBC Virtual Museum.
View all posts by Ferdinand Meyer V →
This entry was posted in Advice, Club News, Hutches, News and tagged hutch, Hutchbook, HutchBook.com, Hutchinson, milestones. Bookmark the permalink.