Both Blue Fish Together Again – at least online!

It is kind of a gray-blue rainy day here in Newport News, Virginia. What a nice time to post some blue fish bottles. Charles Aprill posted his blue fish last night on facebook. We talked three or so years ago about his example and I wrote about it in the FOHBC Bottles and Extras. Here both blue fish bottles appear on the same page!

“The bottle was being used to feed Liniment to a horse”. 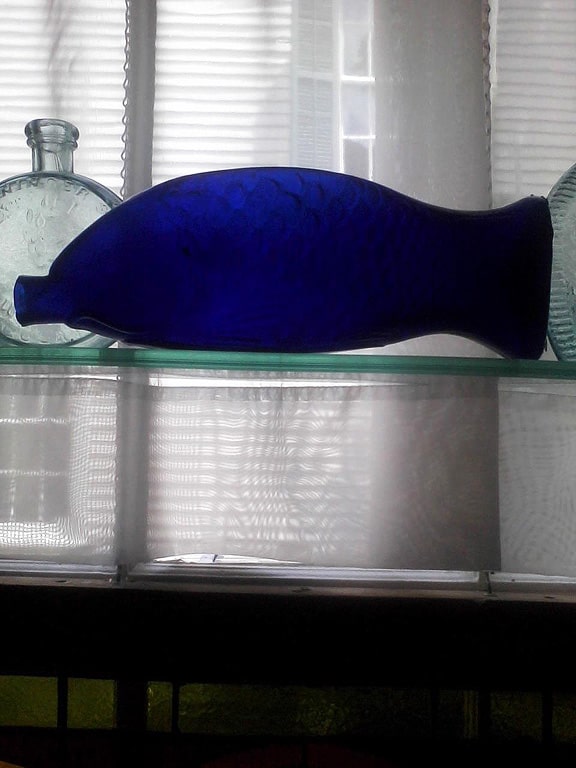 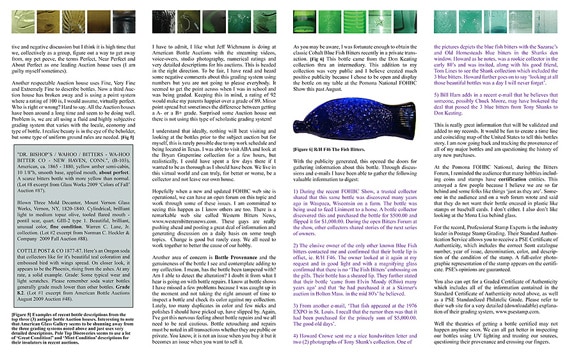 [Excerpt from article] As you may be aware, I was fortunate enough to obtain the classic Cobalt Blue Fish Bitters recently in a private transaction. This bottle came from the Don Keating collection thru an intermediary. This addition to my collection was very public and I believe created much positive publicity because I chose to be open and display the bottle on my table at the Pomona National FOHBC Show this past August.

With the publicity generated, this opened the doors for gathering information about this bottle. Through discussions and e-mails I have been able to gather the following valuable information to digest:

1) During the recent FOHBC Show, a trusted collector shared that this same bottle was discovered many years ago in Waupaca, Wisconsin on a farm. The bottle was being used to feed Liniment to a horse. A bottle collector discovered this and purchased the bottle for $500.00 and flipped it for $1,000.00. During the open Bitters Forum at the show, other collectors shared stories of the next series of owners.

2) The elusive owner of the only other known Blue Fish bitters contacted me and confirmed that their bottle lip is offset, ie. R/H F46. The owner looked at it again at my request and in good light and with a magnifying glass confirmed that there is no ‘The Fish Bitters’ embossing on the gills. Their bottle has a sheared lip. They further stated that their bottle ‘came from Elvin Moody (Ohio) many years ago’ and that ‘he had purchased it at a Skinner’s auction in Bolton Mass. in the mid 80′s’ he believed. 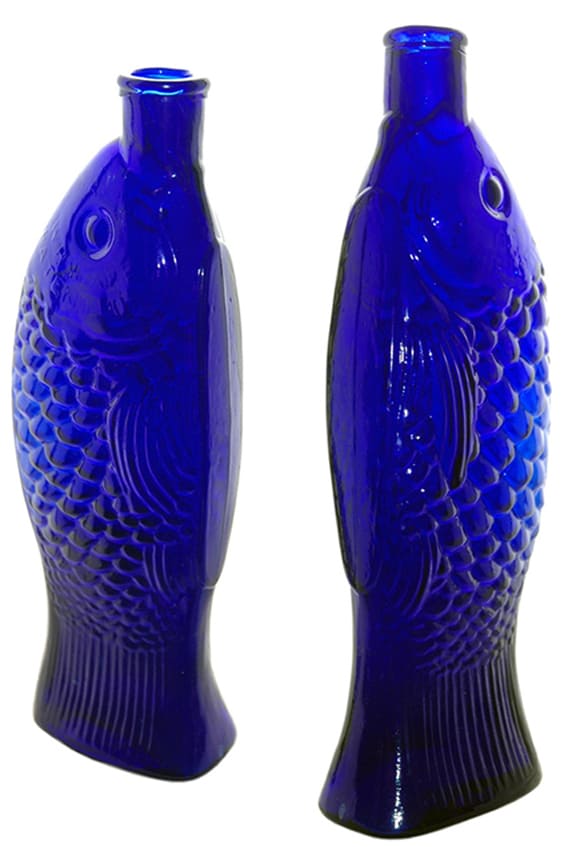 Ferdinand Meyer V is a native of Baltimore, Maryland and has a BFA in Fine Art and Graphic Design from the Kansas City Art Institute and School of Design. Ferdinand is the founding Principal of FMG Design, a nationally recognized design consultation firm. Ferdinand is a passionate collector of American historical glass specializing in bitters bottles, color runs and related classic figural bottles. He is married to Elizabeth Jane Meyer and lives in Houston, Texas with their daughter and three wonderful grandchildren. The Meyers are also very involved in Quarter Horses, antiques and early United States postage stamps. Ferdinand is the past 6-year President of the Federation of Historical Bottle Collectors and is one of the founding members of the FOHBC Virtual Museum.
View all posts by Ferdinand Meyer V →
This entry was posted in Article Publications, Bitters, Bottles and Extras, Collectors & Collections, Figural Bottles, FOHBC News and tagged bitters, blue, Bottles and Extras, Charles Aprill, cobalt, Ferdinand Meyer V, Fish Bitters. Bookmark the permalink.

1 Response to Both Blue Fish Together Again – at least online!