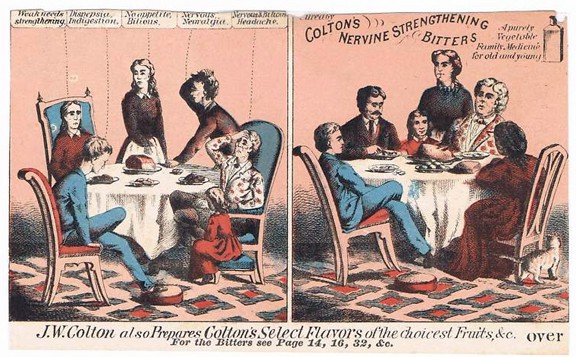 I was looking around eBay yesterday and eventually hit my bookmarked section on Trade Cards. I saw the usual cards, many being Burdock Blood Bitters but one card jumped out for a couple of reasons. The first was the strange illustration, the second was that it was for a neat Bitters bottle I possess and the third, I did not have it. I quickly purchased it using the Buy it Now option so I could study the illustration and do a post on J.W. Coltons Strengthening Bitters.

Finding Trade Cards, Advertising and other related material greatly increases the changes of really understanding the product and the name behind it. 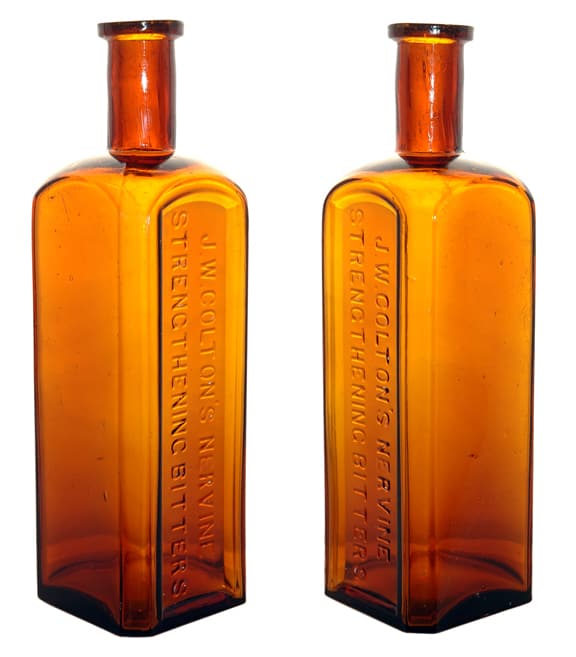 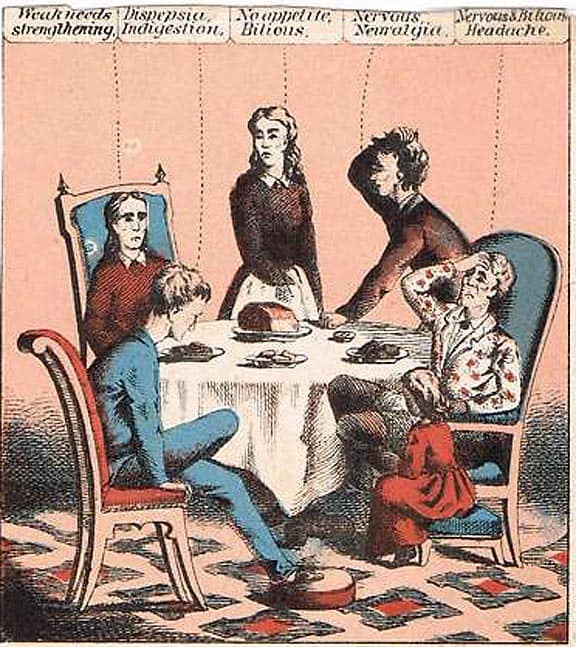 The ‘before’ illustration {left panel of Coltons trade card)

I have enlarged the left panel of the trade card (pictured above) to show the six sickly people in the family suffering from a who slew of ailments that are written in clouds above their heads and connected by dashed lines. This includes:

Look at this family, I am really feeling sorry for them now. And what about the little girl in the red dress? Why are they sitting around a dining table centered with a what looks like a meat loaf? Are those oysters that they just ate for appetizers? Maybe they were tainted. 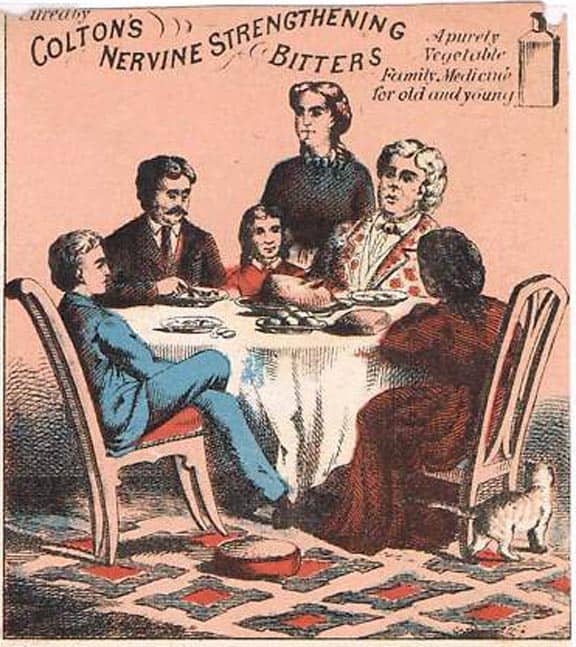 The ‘after’ illustration {right panel of Coltons trade card)

Now look at the right panel of the trade card (pictured above). Wow, what a difference. Even the meat loaf turned into a ham and the cat came out! There are a few obvious things about the second illustration such as the young lad in the blue suit. He has made a remarkable recovery from his Dispepsia and Indigestion’. He doesn’t even need the round foot stool anymore and has the strength and confidence to lean back in his chair. Now look at grandmother or the guy in the dotted coat. What a character and recovery. I would go so far and say he or she took too much and suggest that they not wear that outfit for another family dinner. Now is that the father? Where was he before? Why does the little girl just watch. She is obviously getting bigger. Also momma is very happy because her purchase of Coltons Strengthening Bitters saved her family and cooking.

As typical with any Bitters bottle, I start with Bitters Bottles by Carlyn Ring and W.C. Ham. The following was recorded for the Coltons.

Westfield Souvenir 1906: J. W. Colton made pure extracts and all kinds of flavors in Westfield for 45 years; and was at the same address doing business for 25 years. All drug preparations were made by Mr. Colton himself and have been very successful. In 1906, the New York office was 6 Harrison Street. Mr. J. W. Colton was president, and Mr. William Barton was treasurer and manager. In 1903 the company was reorganized and incorporated. 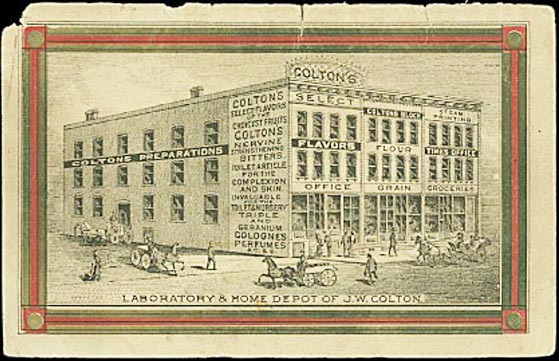 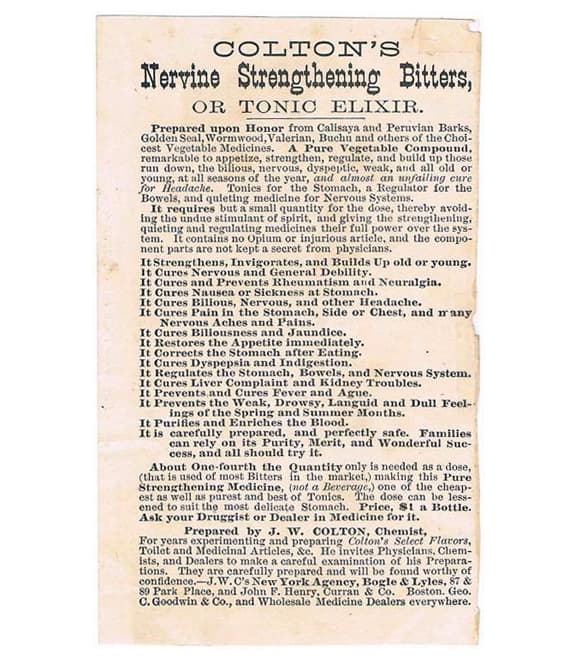 [from Encyclopedia of Massachusetts] John W. Colton, son of Ebenezer and Cynthia (Whitman) Colton, was born in West Springfield, in the part now known as Agawam, in 1832. He attended the public schools of West Springfield Center, and a private school in Springfield, completing his education with a course of study in the Sheffield Scientific School of Yale University.

The drug business early interested him, and for six years he was with the firm of H. and J. Brewer, of Springfield, the firm’s first salaried clerk. After leaving this firm he was for sometime employed by W. H. SchiefFelin & Company, of New York City, but, his health becoming impaired, he left New York and located in Westfield, purchasing the store at the corner of Elm and School streets. His operations were con-
ducted in his own name for a time, but later he admitted a partner, and continued under the name of Colton & Stratton, the business being sold in 1888 to Dewey & Parsons. In 1860 Mr. Colton established the flavoring extract business in which his after life was spent, and his first product was placed upon the market the following year.

In 1873 he built a business block on School street, and a portion of it had housed his flavoring extract business until his death. He had developed this line to a point of great prosperity and wide reputation, and made it his principal business interest always.

Public affairs of local and state importance claimed a share of his time and attention, and his work along these lines was performed public-spiritedly and faithfully. He was a Democrat in political belief, and in 1881 and 1882 represented his district in the State Legislature. During this period he was a member of several important committees, and led in the movement for the repeal of the war tax on savings banks. Mr. Colton was also active in securing for the town of Westfield five thousand dollars a year from the Legislature for a period of five years, this sum to be used in relief work made necessary by the flood of 1878. In purely local affairs he was equally prominent and useful, was a member of the School Board from 1896 to 1899, a director of the Westfield Athenaeum, one of the incorporators of the Woronoco Savings Bank, and vice-president of the Westfield Savings Bank. From 1859 ne was a member of the First Congregational Church, a stalwart supporter of all of its work. In fraternal relations he affiliated with the Masonic order and the Independent Order of Odd Fellows, in the former order belonging to Mt. Moriah Lodge, Free and Accepted Masons, which he joined in 1861, Evening Star Chapter, Royal Arch Masons, and Springfield Commandery, Knights Templar. He was also a charter member of Hampden Council, Royal Arcanum.

John W. Colton was of an admirable type of citizenship, a man who gave liberally of his time and talents for the common good, and who sought no return from the labors thus expended than the consciousness of duty well and thoroughly performed. 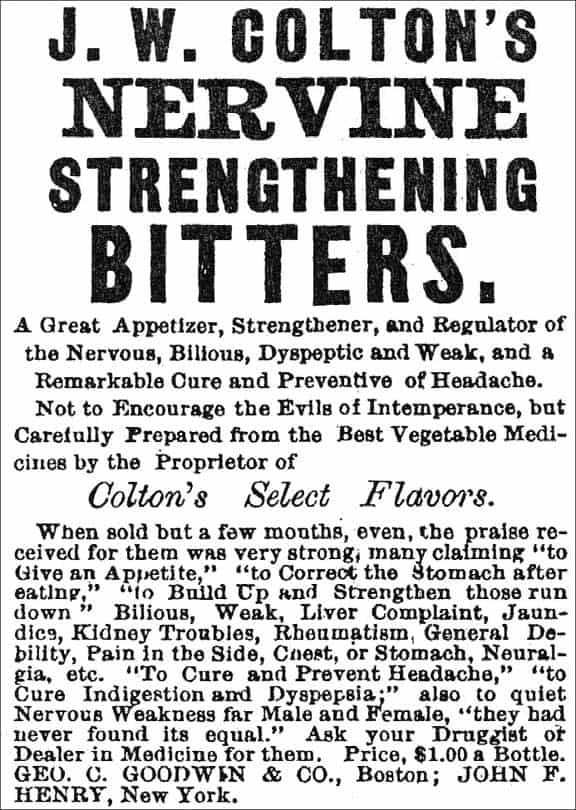 Ferdinand Meyer V is a native of Baltimore, Maryland and has a BFA in Fine Art and Graphic Design from the Kansas City Art Institute and School of Design. Ferdinand is the founding Principal of FMG Design, a nationally recognized design consultation firm. Ferdinand is a passionate collector of American historical glass specializing in bitters bottles, color runs and related classic figural bottles. He is married to Elizabeth Jane Meyer and lives in Houston, Texas with their daughter and three wonderful grandchildren. The Meyers are also very involved in Quarter Horses, antiques and early United States postage stamps. Ferdinand is the past 6-year President of the Federation of Historical Bottle Collectors and is one of the founding members of the FOHBC Virtual Museum.
View all posts by Ferdinand Meyer V →
This entry was posted in Advertising, Bitters, Collectors & Collections, eBay, Ephemera, Humor - Lighter Side, Tonics, Trade Cards and tagged Bilious, bitters, Colton, Coltons, Dispepsia, Elixir, indigestion, J.W. Colton, Meyer Collection, Nervine, Nervous, Strengthening, Tonic. Bookmark the permalink.