I Bet None of You All Have Been to this Bottle Museum Yet! 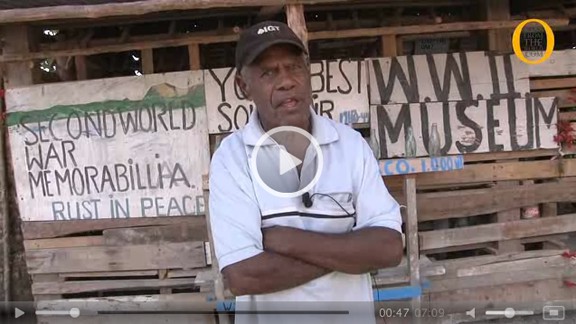 “I was born in 1926 … I’ve been collecting bottles for 70 years. I have hundreds of Coca-Cola bottles coming from all over the world, especially the United States … the oldest bottle dates back to 1915. I also collect relics of planes or ships … relics of the Second World War that I found buried in the ground. I collect these objects because history is fundamental, and the Second World War was very important in the South Pacific where there were some military bases …”.

Meet Ernest and hear about his Museum and Bottles

Vanuatu is an island chain about 1000 miles off the coast of Australia. A man by the name of Ernest Kalkoa has a Coca-Cola Bottle and WWII Artifact Museum located at Havannah Harbor.

Thanks to the Coca-Cola Bottle Man blog “Collections from Around the World” of which I subscribe.

Ferdinand Meyer V is a native of Baltimore, Maryland and has a BFA in Fine Art and Graphic Design from the Kansas City Art Institute and School of Design. Ferdinand is the founding Principal of FMG Design, a nationally recognized design consultation firm. Ferdinand is a passionate collector of American historical glass specializing in bitters bottles, color runs and related classic figural bottles. He is married to Elizabeth Jane Meyer and lives in Houston, Texas with their daughter and three wonderful grandchildren. The Meyers are also very involved in Quarter Horses, antiques and early United States postage stamps. Ferdinand is the past 6-year President of the Federation of Historical Bottle Collectors and is one of the founding members of the FOHBC Virtual Museum.
View all posts by Ferdinand Meyer V →
This entry was posted in Cola, Collectors & Collections, Diving, History, Museums, News, Soda Bottles and tagged Coca-Cola, Second World War. Bookmark the permalink.