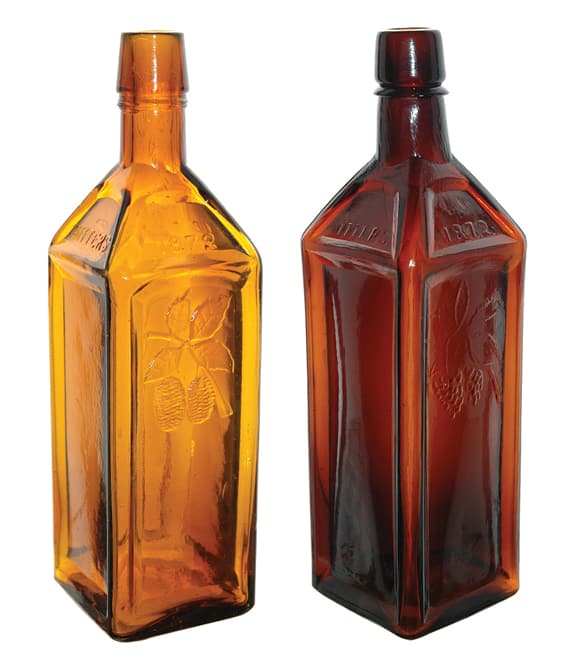 There has been some exciting information posted over at the Bottle Collectors facebook page on the D 93 and D 94 Doyle’s Hop Bitters by Brian Shultis. Brian is from Crossville, Tennessee and specializes in Drakes Plantation Bitters and semi-cabin forms. Brian first started by posting a killer picture of a color run (see below) that he had assembled in years past. Brian noted “they are long gone! Sold and traded most, to pursue my Drake’s!”

One of my first runs in my collecting. Doyle’s Hop Bitters. Although common except for a few mold variants. I still think they are great looking semi cabins! – photo and comment Brian Shultis

I know I now own one (1) of those Shultis bottles from his color run that I purchased from Brian on eBay back in 2003. I also have a color run and have been assembling the different Hop and Berry motifs for each color which is challenging (see picture below). Brian notes that there are twenty different Hops and Berry motifs!

The D 94 DOYLE’S HOP BITTERS with the curved BITTERS embossing really surprised me as I was not aware of this mold. According to Brian, this variant is larger and has the unusual lip treatment much like the Niagara Star Bitters. This variant is often referred to as a Niagara Star mold by some collectors (see pictures below).

Panels under HOP and 1872 curved at top, others are straight. A variant of this bottle which only has the hop berries embossed on one panel but has no shoulder embossing has been recorded. One of the most popular bitters. Available in a wide variety of shades of amber, hop motif design and lettering size, but variations are minor considering the great number in circulation.

Note: J. D. Doyle of Rochester, N.Y. patented this brand in 1872 and that same year he gave sole proprietorship to Asa T. Soule, a Quaker and long-time patent medicine salesman. Soule devoted all his energies and money to immediately promoting the brand and evidently bought ownership from Doyle the following year or became the primary owner of the Hop Bitters Manufacturing Co., with Doyle receiving a small royalty. Asa was somewhat of an eccentric in many ways including the way he advertised their medicines and perhaps that’s what made him a fortune by the 1880’s. He spent huge sums promoting real estate in Kansas but lost money in most of his ventures there. When H. H. Warner, out of Rochester began making inroads into his medicine business. Soule returned and went on to very successful. 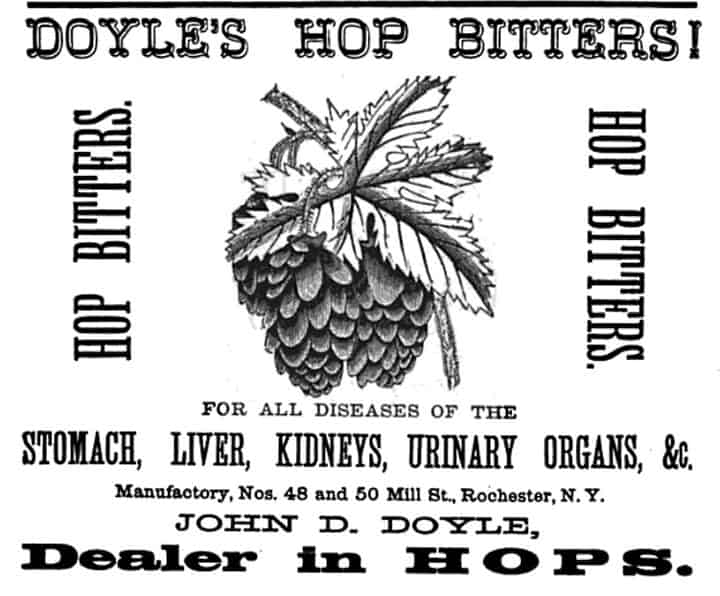 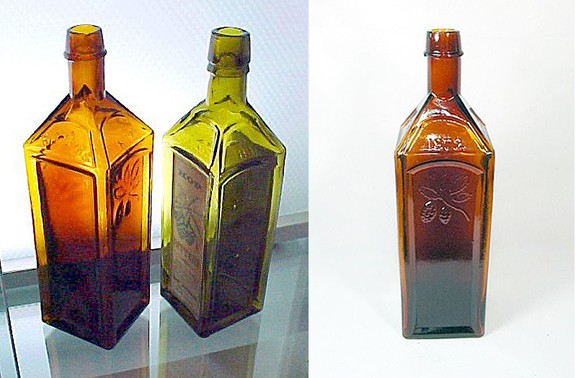 (left and right) Amber Doyle’s Hop Bitters (D 94 variant) with the curved BITTERS embossing This variant is larger and has the unusal lip treatment much like the Niagara Star Bitters. This variant is often reffered to as a Niagara Star mold by some collectors. The center bottle is the common D 93 in a not so common coloration. Photos and information by Brian Shultis 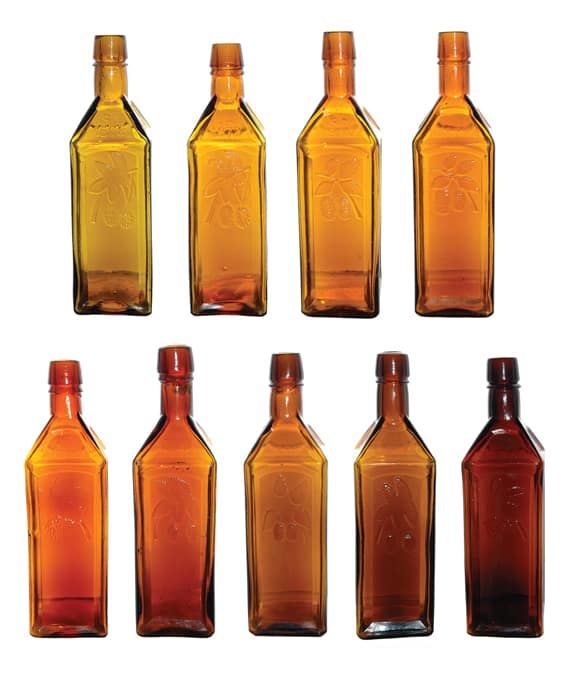 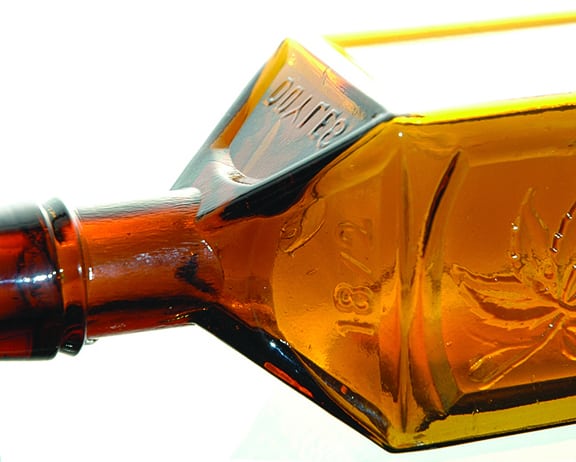 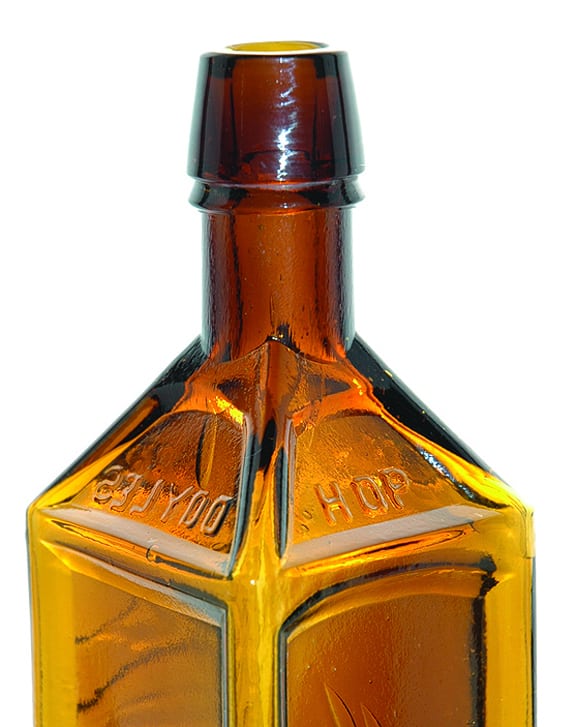 Ferdinand Meyer V is a native of Baltimore, Maryland and has a BFA in Fine Art and Graphic Design from the Kansas City Art Institute and School of Design. Ferdinand is the founding Principal of FMG Design, a nationally recognized design consultation firm. Ferdinand is a passionate collector of American historical glass specializing in bitters bottles, color runs and related classic figural bottles. He is married to Elizabeth Jane Meyer and lives in Houston, Texas with their daughter and three wonderful grandchildren. The Meyers are also very involved in Quarter Horses, antiques and early United States postage stamps. Ferdinand is the past 6-year President of the Federation of Historical Bottle Collectors and is one of the founding members of the FOHBC Virtual Museum.
View all posts by Ferdinand Meyer V →
This entry was posted in Advertising, Bitters, Collectors & Collections, Color Runs, Figural Bottles, History and tagged Backwards Doyles, Berry, Brian Shultis, Doyle's Hop Bitters, Hop, Meyer Collection, motif, semi-cabin. Bookmark the permalink.