An incoming email popped up on my radar yesterday regarding the Federation of Historical Bottle Collectors web site. An FOHBC member and collector named Greg Dean from Queensland, Australia, suggested “It would be good to have a category on the new web site for pot lids. There is nowhere to post images and articles at present”

Greg Dean and I have since corresponded and the information and imagery is just coming in. A few nice pictures of American Pot Lids and information about Greg is posted below. Thanks Greg! 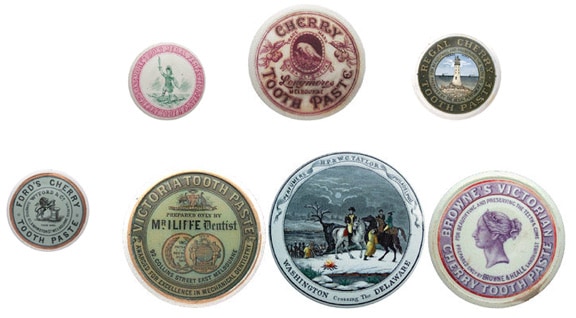 I first started looking for pot lids for my father, George, in Melbourne, Australia, in the early 1990s. He had been a keen collector for some time and pretty soon I too found a liking for these and so started my own collection.

In 2000 I was relocated to the US to work in the Casino / IT field. On arrival, I joined the two closest bottle clubs – the Little Rhody Club in RI and Connecticut Antique Bottle Collectors Association in CT, and discovered a whole new world of collecting. The American bottle collecting scene is far broader than in Australia which was great. There were just so many more bottles and related collectables to follow which was terrific as one of the greatest challenges in other parts of the world is finding available examples of items you collect.

The bottle shows in the US too are very different to those in Australia. Firstly, there is one on somewhere practically every weekend. Back home these are far less frequent and are mostly driven by competitive displays as opposed to the US that focuses on swap and sell. My initial US interest was with historical flasks and it was a tough decision to deviate away from collecting these, but it was local American pot lids I eventually chose as my primary interest.

The first major bottle show I attended was in Baltimore where I was fortunate to meet two gentlemen I had studied and admired for some time, Ben Swanson and Jim Hagenbuch. Over time these gents have become good friends and been the major influence in my search for pot lids and collectables in general.

Working in the Casino industry I was fortunate to be able to travel quite extensively throughout the US and UK. During the eight years I lived in the US I was able to locate and acquire about three quarters of the items documented in Barbara & Sonny Jackson’s great Pot Lid book. Also quite a few that were not!

Being so mobile it was impossible to take my collection with me so I started a website for pot lids that helped me document known examples and share images and related articles with other collectors, the first time many examples had been seen in colour.

I consider the collecting of pot lids to be a most interesting, educational and rewarding hobby. 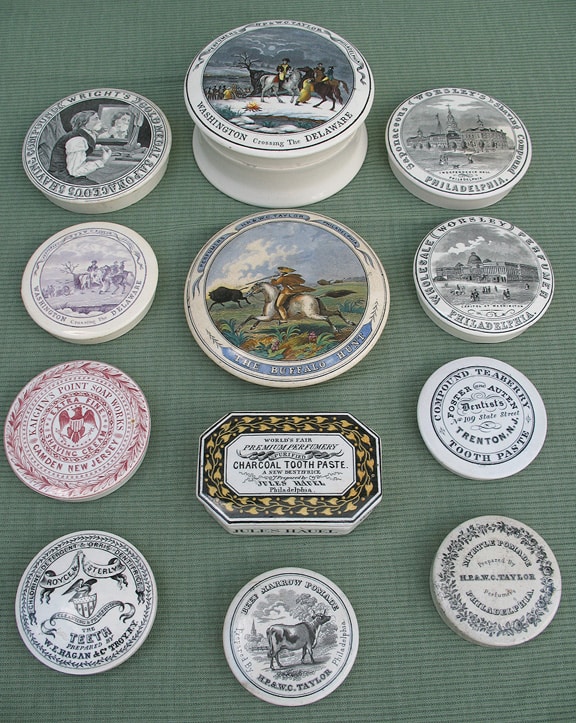 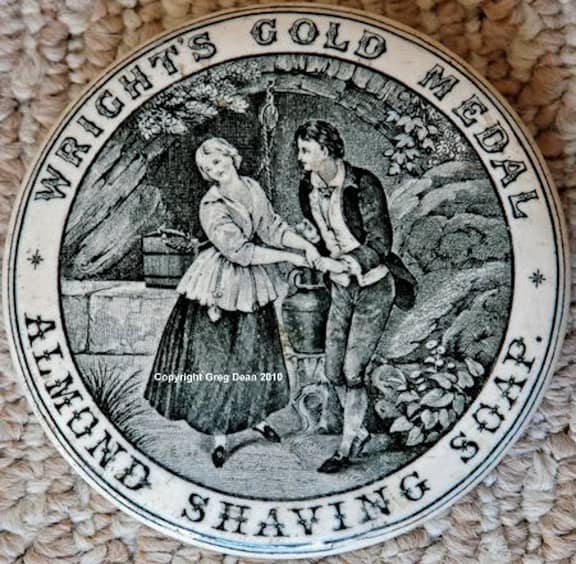 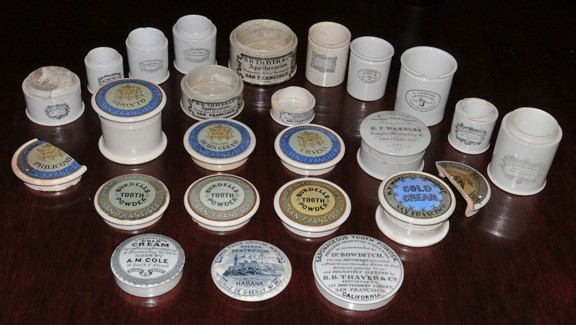 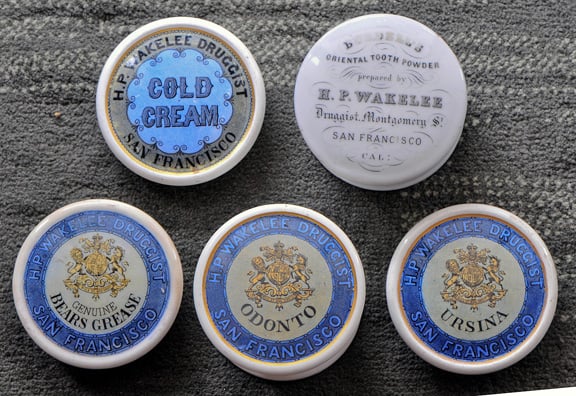 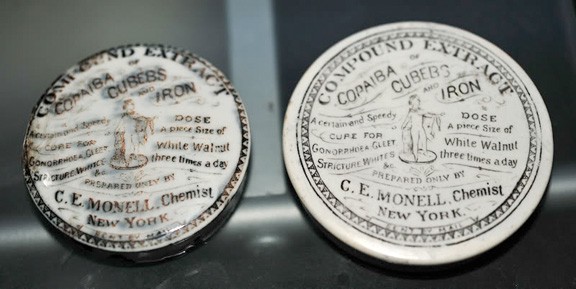 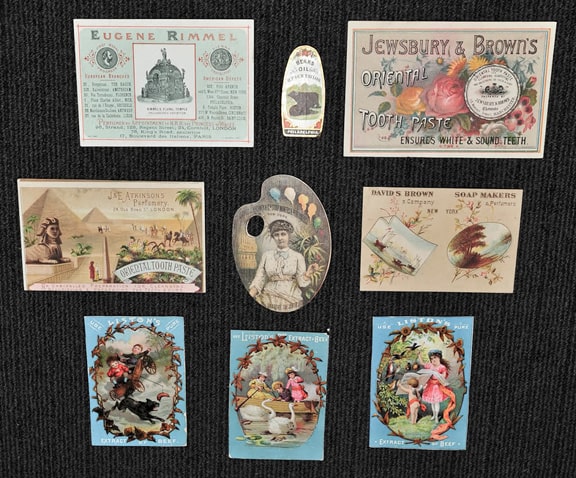 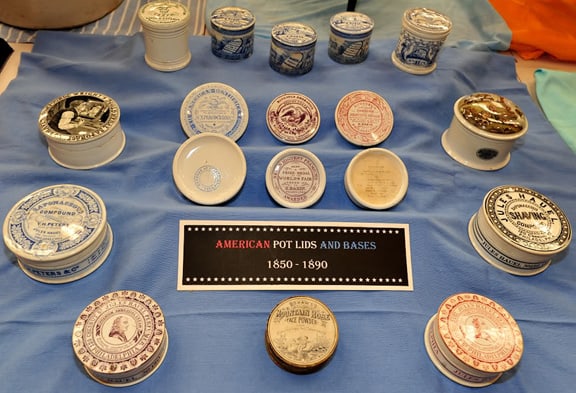 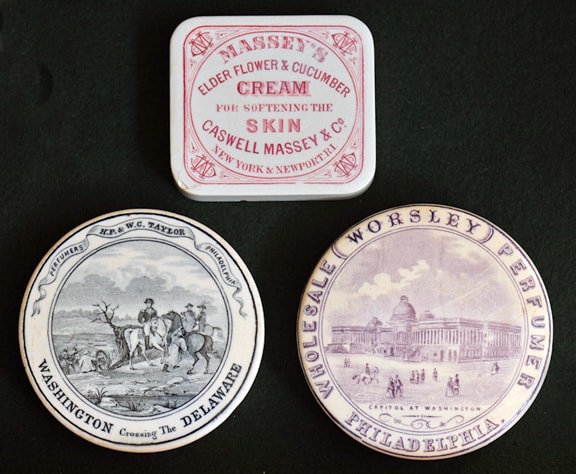 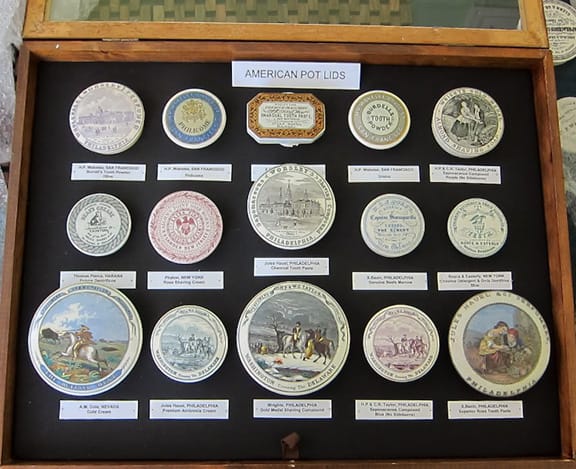 Ferdinand Meyer V is a native of Baltimore, Maryland and has a BFA in Fine Art and Graphic Design from the Kansas City Art Institute and School of Design. Ferdinand is the founding Principal of FMG Design, a nationally recognized design consultation firm. Ferdinand is a passionate collector of American historical glass specializing in bitters bottles, color runs and related classic figural bottles. He is married to Elizabeth Jane Meyer and lives in Houston, Texas with their daughter and three wonderful grandchildren. The Meyers are also very involved in Quarter Horses, antiques and early United States postage stamps. Ferdinand is the past 6-year President of the Federation of Historical Bottle Collectors and is one of the founding members of the FOHBC Virtual Museum.
View all posts by Ferdinand Meyer V →
This entry was posted in Collectors & Collections, Ephemera, FOHBC News, Pot Lids and tagged Australia, Ben Swanson, fohbc, Greg Dean, Jim Hagenbuch, Little Rhody Club, Pot Lids, Queensland. Bookmark the permalink.

1 Response to American Pot Lid Pictures in from Greg Dean