Thanksgiving Bottles – Digger Odell Publications 2008. This post is dedicated to 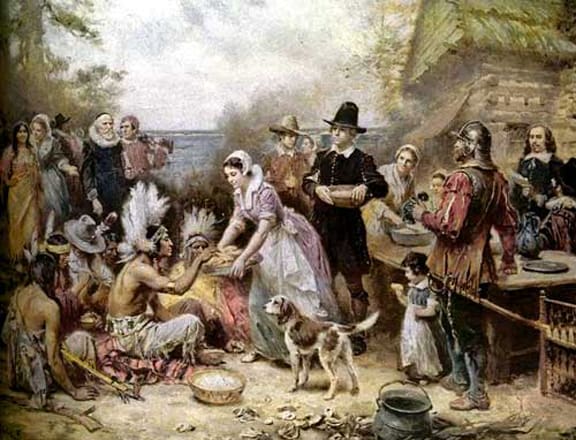 “On December 4, 1619, 38 English settlers arrived at Berkeley Hundred, which comprised about 8,000 acres (32 km≤) on the north bank of the James River, near Herring Creek, in an area then known as Charles Cittie, about 20 miles (32 km) upstream from Jamestown, where the first permanent settlement of the Colony of Virginia had been established on May 14, 1607.

That was the traditional Thanksgiving as the story was handed down to us. We know what they supposed ate and shared. We know how they dressed and what they believed. We know from archaeological evidence of the Fort they built and even the glasshouse. It has been said, that glass-making was America’s first industry. Jamestown became the first permanent settlement some twelve years earlier in 1607.

“On October 1, 1608, a company of settlers arrived aboard the English vessel Mary and Margaret with the Second Supply. The journey took roughly three months. The company recruited these as skilled craftsmen and industry specialists: soap-ash, glass, lumber milling (wainscot, clapboard, and ëdealí ó planks, especially soft wood planks) and naval stores (pitch, turpentine, and tar). Among these additional settlers were eight “Dutch-men” (consisting of unnamed craftsmen and three who were probably the wood-mill-men ó Adam, Franz and Samuel) “Dutch-men” probably meaning German or German-speakers)[7], and Polish craftsmen, who had been hired by the Virginia Company of London’s leaders to help develop manufacture profitable export products. There has been debate about the nationality of the specific craftsmen, and both the Germans and Poles claim the glassmaker for one of their own, but the evidence is insufficient.[8] Ethnicity is further complicated by the fact that the German minority in Royal Prussia lived under Polish control during this period. Wikipedia

Glass was actually manufactured in Jamestown only for a short time since the factory failed sometime after 1610. A second attempt to re-establish a glasshouse in Jamestown was in 1622 with Italian glassmen also failed. But we know from written records such as those in 1632, when Captain John Smith said, “…We sent home ample proof of pitch, tar and glass…” that they did make and export products. The actual Jamestown furnaces were re-discovered and excavated in 1948.

What kind of bottles and other glassware were produced is not certain.  It is likely that the typical black glass bottles that were popular in England and other parts of Europe at the time would be likely candidates. Given the limited information of how much and what was made in Jamestown it is possible that a black glass bottle sat on the first Thanksgiving table, at least I would like to think so.

Ferdinand Meyer V is a native of Baltimore, Maryland and has a BFA in Fine Art and Graphic Design from the Kansas City Art Institute and School of Design. Ferdinand is the founding Principal of FMG Design, a nationally recognized design consultation firm. Ferdinand is a passionate collector of American historical glass specializing in bitters bottles, color runs and related classic figural bottles. He is married to Elizabeth Jane Meyer and lives in Houston, Texas with their daughter and three wonderful grandchildren. The Meyers are also very involved in Quarter Horses, antiques and early United States postage stamps. Ferdinand is the past 6-year President of the Federation of Historical Bottle Collectors and is one of the founding members of the FOHBC Virtual Museum.
View all posts by Ferdinand Meyer V →
This entry was posted in Article Publications, Black Glass, History, Publications and tagged black glass, Captain John Woodleaf, Digger Odell, James River, Jamestown, John Odell, Thanksgiving, Virginia. Bookmark the permalink.