Bottle of the week comes from Chris Eib (bottleboys) collection and as you can see he has put together a nice collection on this company. I found some information and added it too, thanks Chris…great stuff. 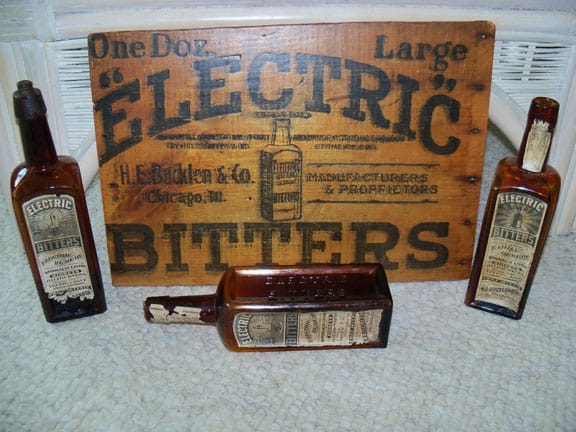 H.E. Bucklen & Company of Chicago were highly successful sellers of a number of well-known brands. Herbert E. Bucklen had purchased the rights to his medicines from one Dr. Z. L. King of Elkhart, Indiana, about 1878 and moved the business from Elkhart to Chicago about 1878-1879. Bucklen spent lavish sums on advertising in all types of media and created the brand name of “New Discovery”, which had national recognition by 1885. He also had several other top-selling medicines including the Electric Bitters, mentioned above, and The New Life Pills, introduced in 1880 as a cure for stomach ailments. Products which never sold well were Dr. King’s California Golden Compound. Dr. King’s Hop Cordial, and Dr. Scheeler’s Great German Cure for Consumption

Bucklen’s “New Discovery” was targeted by Samuel Hopkins Adams in his attack on the patent medicine industry in a series of articles in Colliers Magazine in 1905. Of the ‘New Discovery,” Adams said:

“It is proclaimed to be the ‘only sure cure for consumption.” A further announcement is made that ‘it strikes terror to the doctors.’ As it is a morphine and chloroform mixture, ‘Dr. King’s New Discovery for Consumption’ is well calculated to strike terror to the doctors or to any other class or profession, except, perhaps, the undertakers. It is a pretty diabolical concoction to give to anyone, and particularly to a consumptive. The chloroform temporarily allays the cough, thereby checking Nature’s effort to throw off the dead matter from the lungs. the opium drugs the patient into a deceived cheerfulness. The combination is admirably designed to shorten the life of any consumptive who takes it steadily.”

By 1893, the business was well enough established to be a major retailer through sites at the World’s Fair in Chicago. This retailing accomplishment was achieved in part by offering for 50 cents a 31-page book, half-filled with color lithographs of the world fair buildings, and the other half descriptive text. The advertising contained therein, of the “New Discovery,” made sure that most people who went to the World’s Fair to see the marvels available to them at the end of the 19th century thought of the “New Discovery” as one of those marvels. 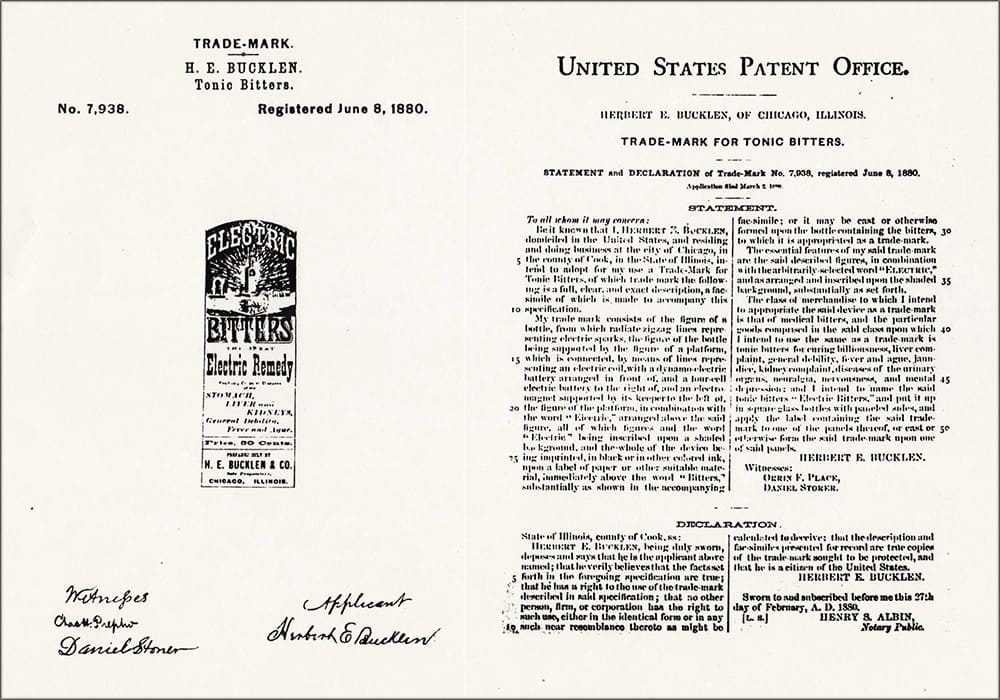 E 30 ELECTRIC / BITTERS // sp // H. E. BUCKLEN & CO / CHICAGO, ILL // sp //
8 7/8 x 2 3/8 (6)
Square, Amber and shades of light Yellow amber, LTC, 4 sp, Tooled lip
and Applied mouth, Common
This bottle was made in many different molds which resulted in minor variations
in lettering height and width. This bottle was used prior to the 1906 Pure Food and Drug Act when the name was changed to Electric Brand Bitters (E 31) 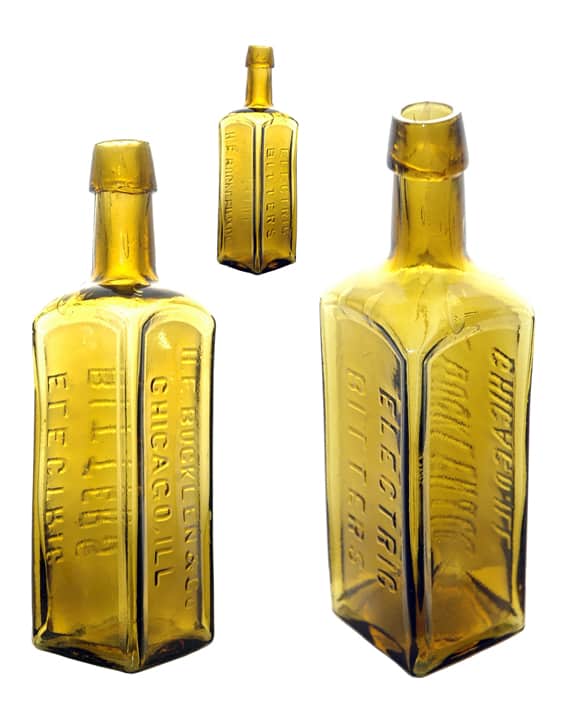 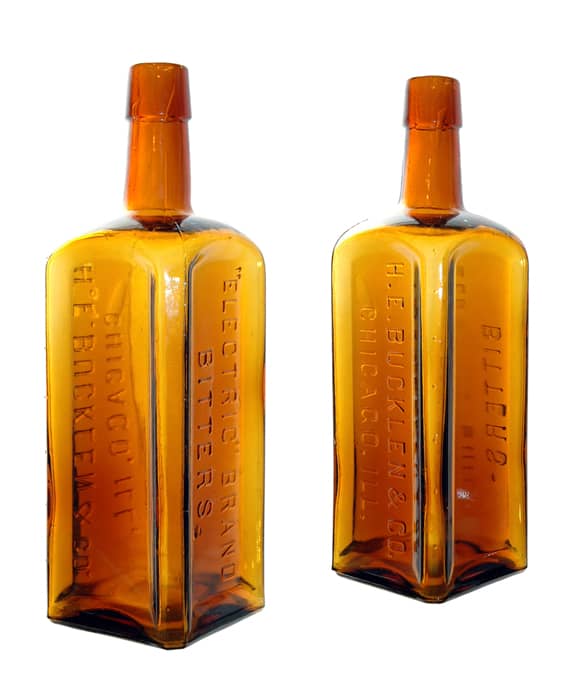 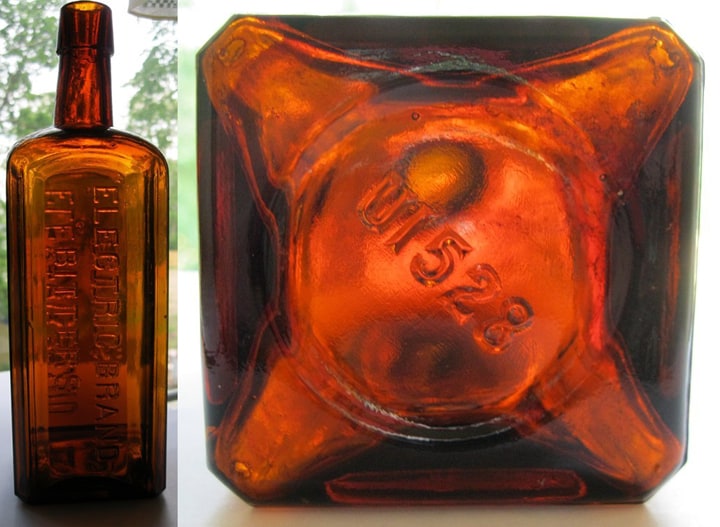 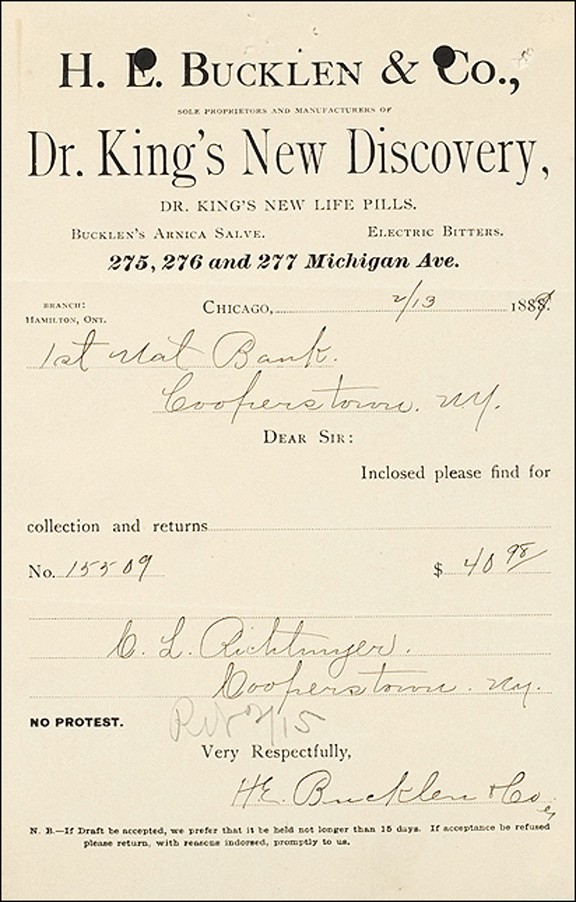 Ferdinand Meyer V is a native of Baltimore, Maryland and has a BFA in Fine Art and Graphic Design from the Kansas City Art Institute and School of Design. Ferdinand is the founding Principal of FMG Design, a nationally recognized design consultation firm. Ferdinand is a passionate collector of American historical glass specializing in bitters bottles, color runs and related classic figural bottles. He is married to Elizabeth Jane Meyer and lives in Houston, Texas with their daughter and three wonderful grandchildren. The Meyers are also very involved in Quarter Horses, antiques and early United States postage stamps. Ferdinand is the past 6-year President of the Federation of Historical Bottle Collectors and is one of the founding members of the FOHBC Virtual Museum.
View all posts by Ferdinand Meyer V →
This entry was posted in Advertising, Bitters, Collectors & Collections, History and tagged Bucklen, chicago, Chris Eib, Electric Bitters, Electric Brand Bitters, ferdinand meyer, H. E. Bucklen & Co., Rich DeMarsh, Ricks Bottle Room. Bookmark the permalink.