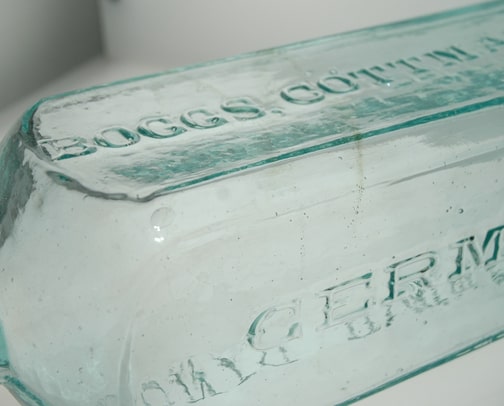 Earlier this morning, I posted some pictures and information from Baltimore collector, Chris Rowell (click here). Specifically speaking it was…

“When I finally got hooked on bottles in 2002 (read story), I had the pleasure of quickly meeting a fellow named Chris Rowell who is a stand-out member of the Baltimore Club and an experienced digger. He actually sold me one of my favorite bitters which is a perfect example of a killer, pontiled, Boggs, Cottman & Co. German Tonic Bitters (R/H G 28).

That got me thinking about my Boggs, Cottman & Co. German Tonic Bitters. It’s dark outside so I can’t check on my baby so I thought I would post a few pictures. PS: This is a BALTIMORE bottle! Earlier writings inferred that this was a western bitters. That is incorrect. 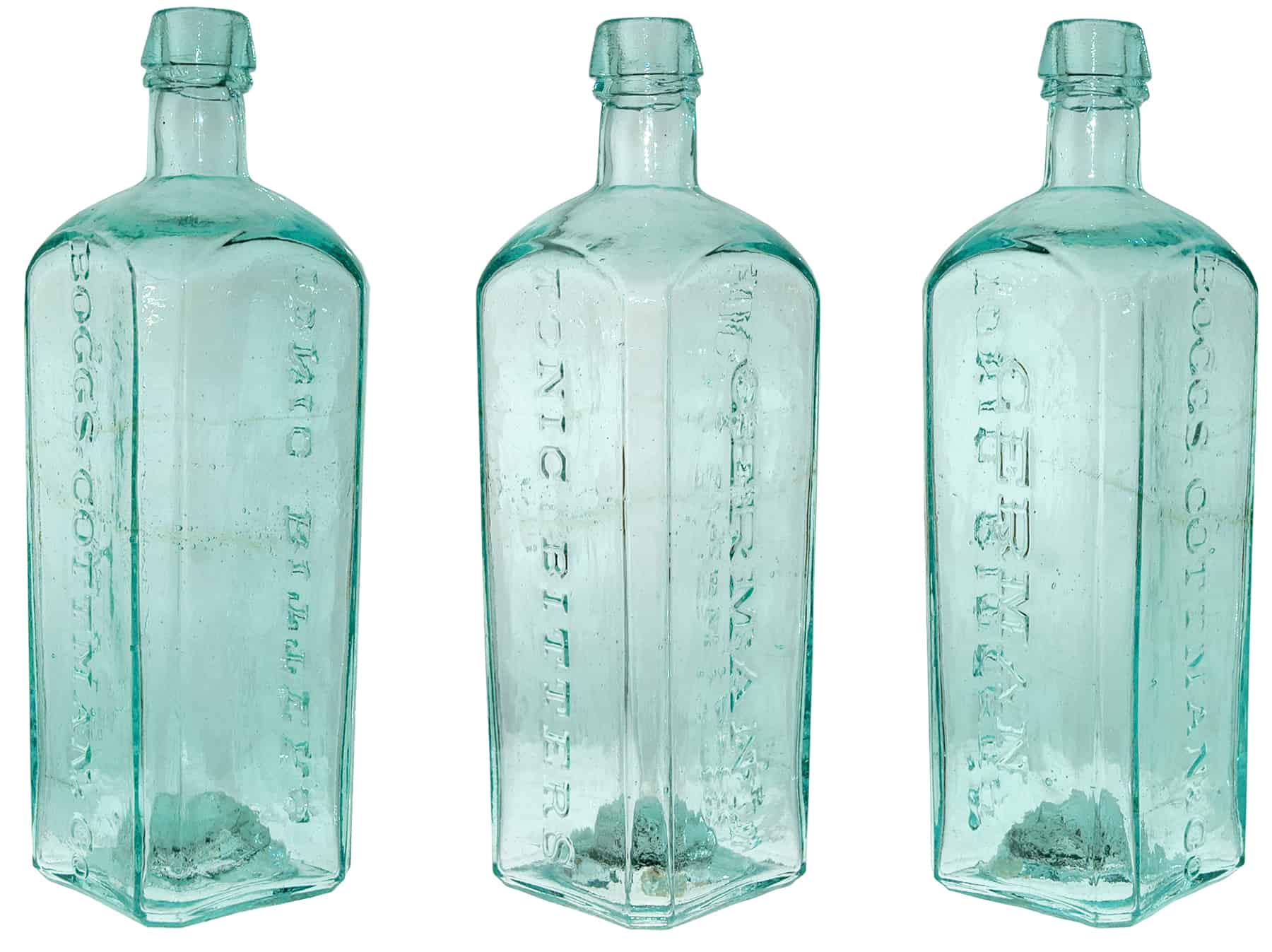 The updated Carlyn Ring and W.C. Ham listing in Bitters Bottles Supplement 2 is as follows:

My example was purchased from Chris Rowell in October 2002 and has a metallic pontil. It is full of whittle and bubbles and has a few light olive striation streaks. I believe it to be the best example of the three or four bottles that are known to exist. I have seen three of them.

German Tonic Bitters was noted in advertising to have first been used in 1844. We can not confirm this but there was probably some labeled concoction that was the predecessor to Boggs’ German Tonic Bitters in the embossed square aqua bottle. This bitters product was made and sold from around 1859 to 1871. The bottles were probably produced around 1865 and were made at the Baltimore Glass Works. Boggs’ German Tonic Bitters was sold by the case and for $1 a quart bottle. Yes, some examples did make it out west. By 1870, advertising was in full swing and the brand advertised itself as “B.B.B. Boggs Balt Bitters”

Boggs, Cottman & Co. was first listed in 1847 or so selling liquors and wines in Baltimore at 46 W. Lombard St. The partners were William A. Boggs and James S. Cottman. Prior to Cottman joining, it was Boggs & Son as noted in advertising in 1842. This would have been Harmanus Boggs and his son William. Cottman would marry into the family when he married Elizabeth McEldery Boggs, of Pennsylvania ancestry, on April 25, 1844. James Stuart Cottman was the son of Lazarus and Elizabeth Morris (Bishop) Cottman. They were the parents of two sons, James Hough Cottman and Clarence Cottman. James Stuart Cottman died on June 9, 1863. 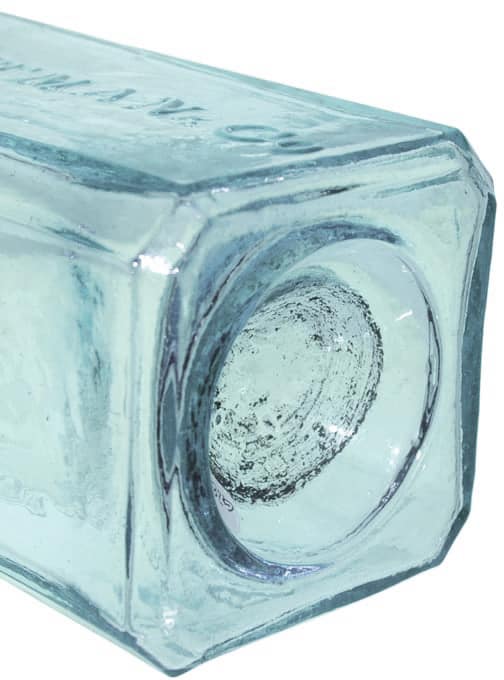 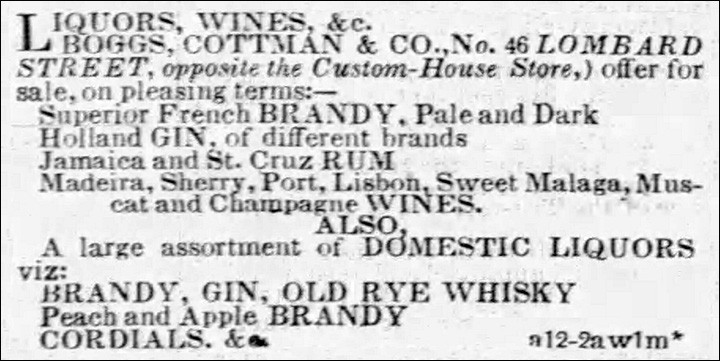 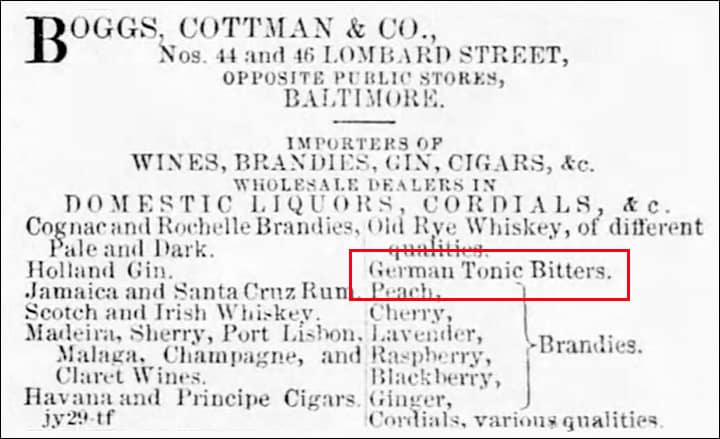 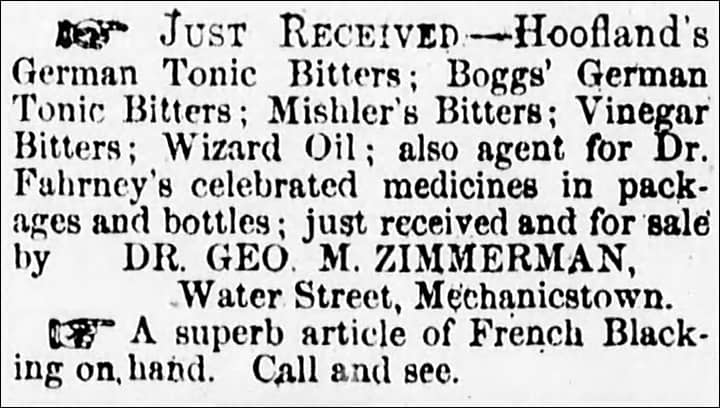 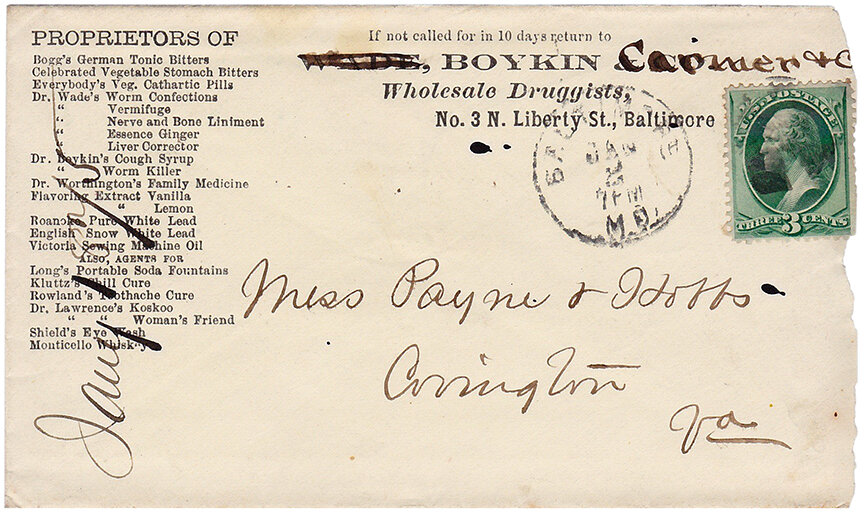 Ferdinand Meyer V is a native of Baltimore, Maryland and has a BFA in Fine Art and Graphic Design from the Kansas City Art Institute and School of Design. Ferdinand is the founding Principal of FMG Design, a nationally recognized design consultation firm. Ferdinand is a passionate collector of American historical glass specializing in bitters bottles, color runs and related classic figural bottles. He is married to Elizabeth Jane Meyer and lives in Houston, Texas with their daughter and three wonderful grandchildren. The Meyers are also very involved in Quarter Horses, antiques and early United States postage stamps. Ferdinand is the past 6-year President of the Federation of Historical Bottle Collectors and is one of the founding members of the FOHBC Virtual Museum.
View all posts by Ferdinand Meyer V →
This entry was posted in Bitters, Collectors & Collections, History, Liquor Merchant, Tonics and tagged Baltimore, Boggs, Chris Rowell, Cottman, Ferdinand Meyer Collection, German Tonic Bitters, Harmanus Boggs, James Stuart Cottman, liquor, maryland, merchant. Bookmark the permalink.