Back in April 2010, an interesting find occurred in Seattle, Washington. A fellow named Niel Smith found an extremely rare coloration of a Brown’s Indian Queen.

According to Niel in a email that was circulated, ‘This bottle was found at an estate sale the weekend of the Antioch show. It is mint, with an extremely crude top. The first picture is how I found it, complete with price tag, in a window at the sale!‘

I am trying to track down more information. I have posted the initial photographs that circulated in April last year.

Bill did mention that there was a second chip in the mouth while only one was reported by Glass Works. He said he almost sent it back. He is now glad he kept it. I would agree. 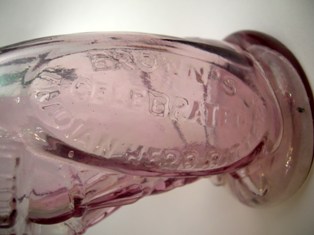 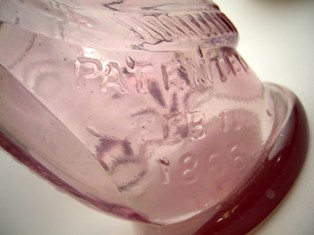 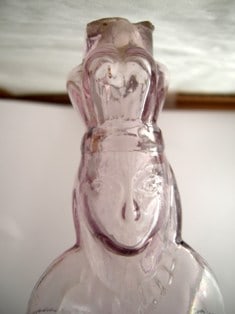 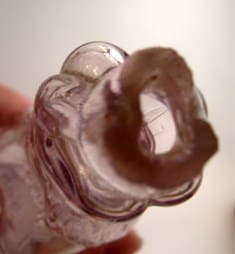 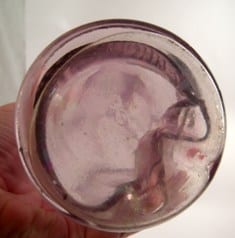 Ferdinand Meyer V is a native of Baltimore, Maryland and has a BFA in Fine Art and Graphic Design from the Kansas City Art Institute and School of Design. Ferdinand is the founding Principal of FMG Design, a nationally recognized design consultation firm. Ferdinand is a passionate collector of American historical glass specializing in bitters bottles, color runs and related classic figural bottles. He is married to Elizabeth Jane Meyer and lives in Houston, Texas with their daughter and three wonderful grandchildren. The Meyers are also very involved in Quarter Horses, antiques and early United States postage stamps. Ferdinand is the past 6-year President of the Federation of Historical Bottle Collectors and is one of the founding members of the FOHBC Virtual Museum.
View all posts by Ferdinand Meyer V →
This entry was posted in Auction News, Bitters, Bottle Shows, Collectors & Collections, Digging and Finding, Figural Bottles, News and tagged amethyst, Bill Taylor, Brown's Indian Queen, estate sale, Figural, Glass Works, Grants Pass, Indian Queen, Niel Smith, oregon, Seattle, Washington. Bookmark the permalink.