Lightning Rod Balls do not get the airplay of say Target Balls, Fire Grenades or Witch Balls, but in my camp, these balls rule. Pictured above is my color run of Quilted Flat Lightning Rod Balls. Company pattern of the George E. Thompson Lightning Rod Co. in Owatonna, Minnesota. Referred to as ‘Polar Star’ pattern. Balls have large collars with King Ventilating Company on caps. 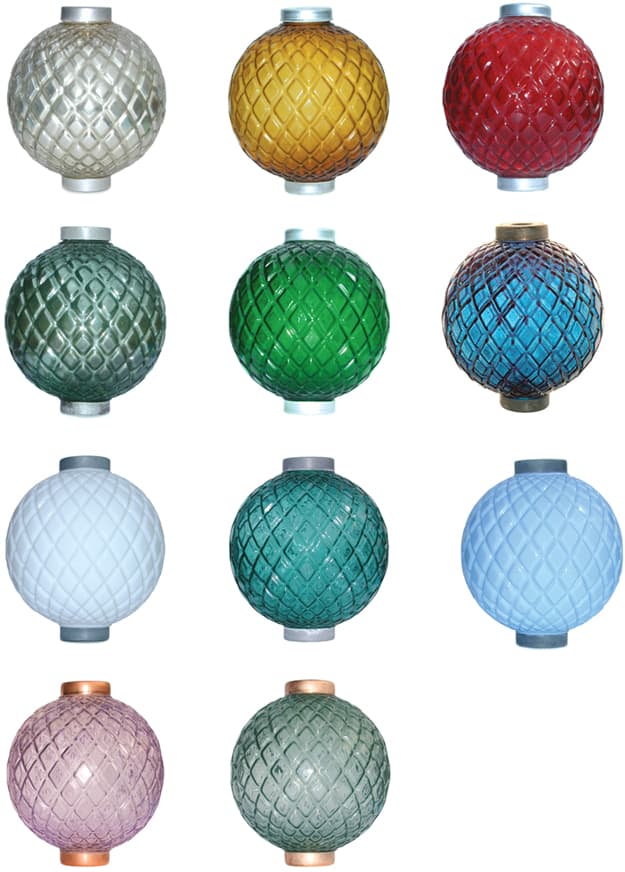 In the 19th century, the lightning rod became a decorative motif. Lightning rods were embellished with ornamental glass balls that are now prized by collectors. The ornamental appeal of these glass balls has been used in weather vanes. The main purpose of these balls, however, is to provide evidence of a lightning strike by shattering or falling off. If after a storm, a ball is discovered missing or broken, the property owner should then check the building, rod, and grounding wire for damage.

According to the Iowa Barn Association, lightning rod balls have long been part of the American rural landscape. Some were made as early as 1840. They were originally sold as ornaments for lightning rods and are found in a wide range of shapes and colors. Made of glass or ceramic, they had no practical use, but added a decorative touch to the rods.

The balls were usually about four and a half inches in diameter. Glass balls were typically white and blue milk glass. Clear glass ones have often turned to amethyst from sun exposure to impurities in the glass.

There are some 34 shapes or styles of lightning rod balls. The balls were sold by salesmen going from farm to farm in horse drawn wagons from 1870 until the Great Depression closed businesses.

Ferdinand Meyer V is a native of Baltimore, Maryland and has a BFA in Fine Art and Graphic Design from the Kansas City Art Institute and School of Design. Ferdinand is the founding Principal of FMG Design, a nationally recognized design consultation firm. Ferdinand is a passionate collector of American historical glass specializing in bitters bottles, color runs and related classic figural bottles. He is married to Elizabeth Jane Meyer and lives in Houston, Texas with their daughter and three wonderful grandchildren. The Meyers are also very involved in Quarter Horses, antiques and early United States postage stamps. Ferdinand is the past 6-year President of the Federation of Historical Bottle Collectors and is one of the founding members of the FOHBC Virtual Museum.
View all posts by Ferdinand Meyer V →
This entry was posted in Collectors & Collections, Color Runs, Lightning Rod Balls and tagged Flat Quilted, George E. Thompson, Great Depression, Iowa Barn Association, lightning rod balls, Minnesota, Owatonna, quilted. Bookmark the permalink.