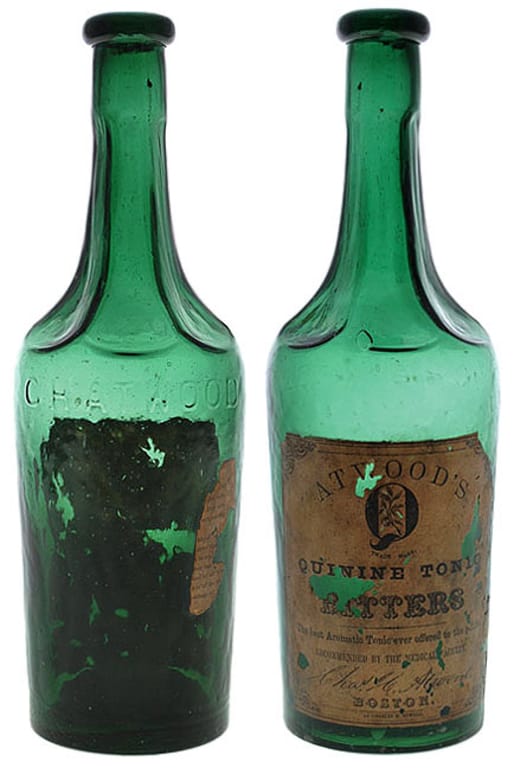 The C. H. Atwood bottles do not get much attention because they are not embossed with the word “bitters”. This doesn’t concern me the slightest. Over the past years, I have managed to put together a color run starting with three bottles I picked up in the Bottles and More, Galleria Auction XXI in April 2007.

Produced in Boston by Charles H. Atwood from 1860 – 1875, the quart bottles are round and about 10-1/2″ tall though height varies. They have fluted necks and nice applied mouths. The colors are very desirable and the bottles usually have a lot of glass character and presence. They are great window bottles too. I recently added two new bottles to my color run from Glass Works Auction 91 in March 2011, including the spectacular labeled example pictured above.

As this post was updated in 2018, I have added two, smaller half-pint size examples to my collection which are pictured further below. One is dark puce while the other is green. The puce example has no C H Atwood embossing while the green example is embossed C H Atwood, Boston. 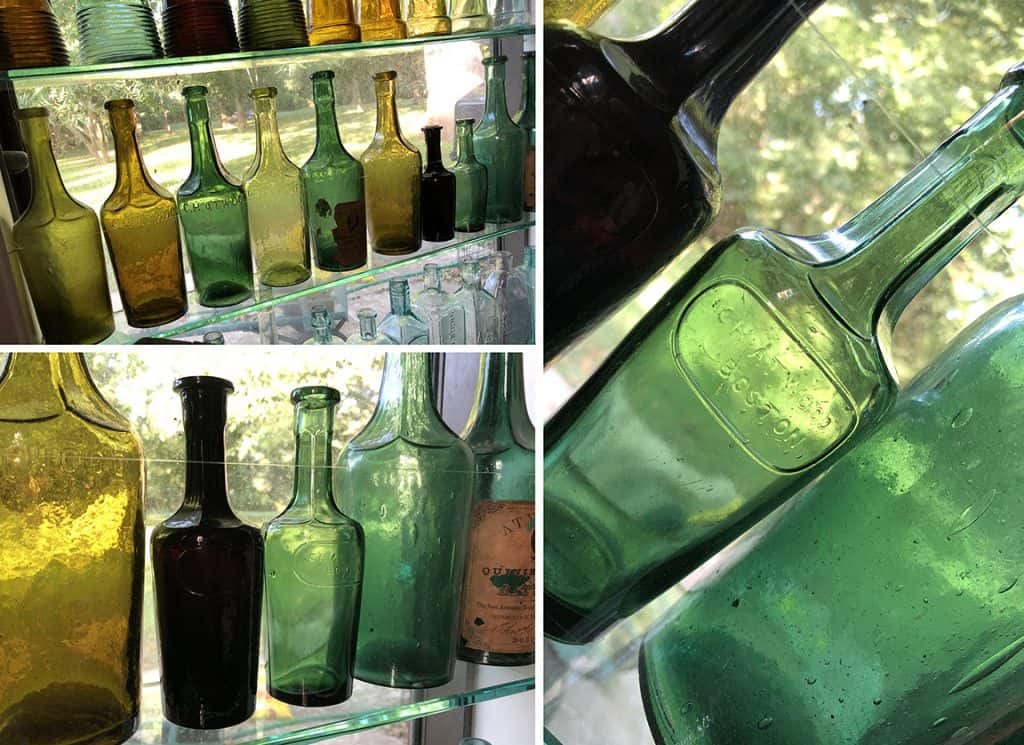 The Carlyn Ring and W.C. Ham listing in Bitters Bottles is as follows. As you can see, the listing needs to be updated.

Charles Henry Atwood was probably born around 1822 in Massachusetts. We find him first listed as a druggist selling ‘Fluid Extract of Sienna’ in 1845 which was most likely a predecessor of his Atwood’s Quinine Tonic Bitters. Quinine was first isolated in 1820 from the bark of a cinchona tree. Peruvian bark extracts have been used to treat malaria since at least 1632.

C. H. Atwood would sell his Quinine Tonic Bitters from about 1860 to 1871. This is when his bottles were made and used. He used the letter “Q” with a cinchona tree stem in the middle for a logo. Atwood was listed many times in Boston city directories as a chemist whose signature can be found on each bottle label. He is also listed as a highly respected importer of choice chemicals and medicines. Besides the fluted bottles, there is also an aqua medicine bottle embossed Atwood’s Quinine Tonic Bitters.

Atwood will sell the rights to his bitters to Alvah Littlefield who was listed as the proprietor of C H Atwood’s Quinine Tonic Bitters in 1871. He operated a drugstore within and under the United States Hotel in the 1870s. Littlefield’s wife would later hang herself in 1875 on a chamber door. Apparently she had become “deranged” as news reports stated.

Charles Atwood died on 12 May 1877 in Boston. There is reference to his bitters surviving and being sold as late as 1906.

There are a number of sources online (one listed below) that state that Moses Atwood was the inventor of the Atwood’s Quinine Tonic Bitters. These reports ignore Charles Henry Atwood. Since C.H. Atwood was a chemist and druggist, I’m going to give him the benefit of doubt until I can dispel or prove the connection.

[Excerpt] This volume in the American Antiquarian Cookbook Collection, published in New York in 1877, is a cookbook, patent medicine advertisement, and medical manual all combined in one small volume published by the manufacturer of a well-known and widely used nineteenth century home remedy, Atwood’s Bitters.

Historical records assert that in 1840, Moses Atwood of Boston created what became a widely used and very popular patent medicine, Atwood’s Quinine Tonic Bitters. Rights to the product were eventually bought by John Henry, who added another remedy, Dr. Roger’s Compound Syrup of Liverwort, Tar & Canchalagua, to his collection and created the Manhattan Medicine Company to manufacture and sell the concoctions.

The Manhattan Cook-Book is a small volume that is essentially a promotional flyer for the company’s patent medicines. Recipes and recommendations for hair care and personal toiletry are threaded throughout with patent medicine ads, so that page 1 of the content touts Dr. Rogers’ Compound Syrup, and page 2 lists “receipts” for Tea Biscuit, Delicious Lemon Jelly Cake, and Rusks. Every page is headed by an exhortation to, “Take Spalding’s Pills for Costiveness,” “Take Dr. Johnson’s Bitters for Indigestion,” “Use Phalon’s Hair Invigorator for the Hair,” and many more. Recipes for tapioca, coffee cake, and strawberry tartlets are sandwiched in between medical advice (using many of the medicines advertised) for whooping cough, asthma, pneumonia, and other diseases. This charming example provides fascinating insight into contemporary cooking, medicine, and lifestyles.

This edition of The Manhattan Cook-Book by the Manhattan Medicine Company was reproduced by permission from the volume in the collection of the American Antiquarian Society, Worcester, Massachusetts. Founded in 1812 by Isaiah Thomas, a Revolutionary War patriot and successful printer and publisher, the Society is a research library documenting the life of Americans from the colonial era through 1876. The Society collects, preserves, and makes available as complete a record as possible of the printed materials from the early American experience. The cookbook collection includes approximately 1,100 volumes.

The Manhattan Medicine Company was founded by John Henry in 1877 to manufacture and sell various patent medicines to which he had acquired rights including Atwood’s Quinine Tonic Bitters, Dr. Rogers’ Syrup of Liverwort, Tar, and Canchalagua, Phalon’s Hair Invigorator, Spaldings Cephalic Pills, and many other popular remedies of the day. 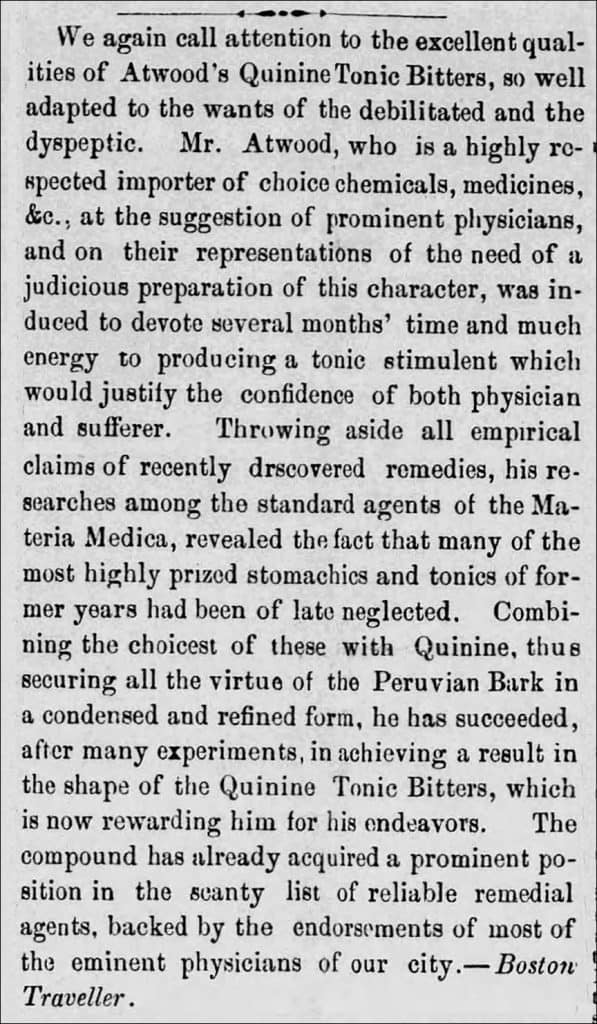 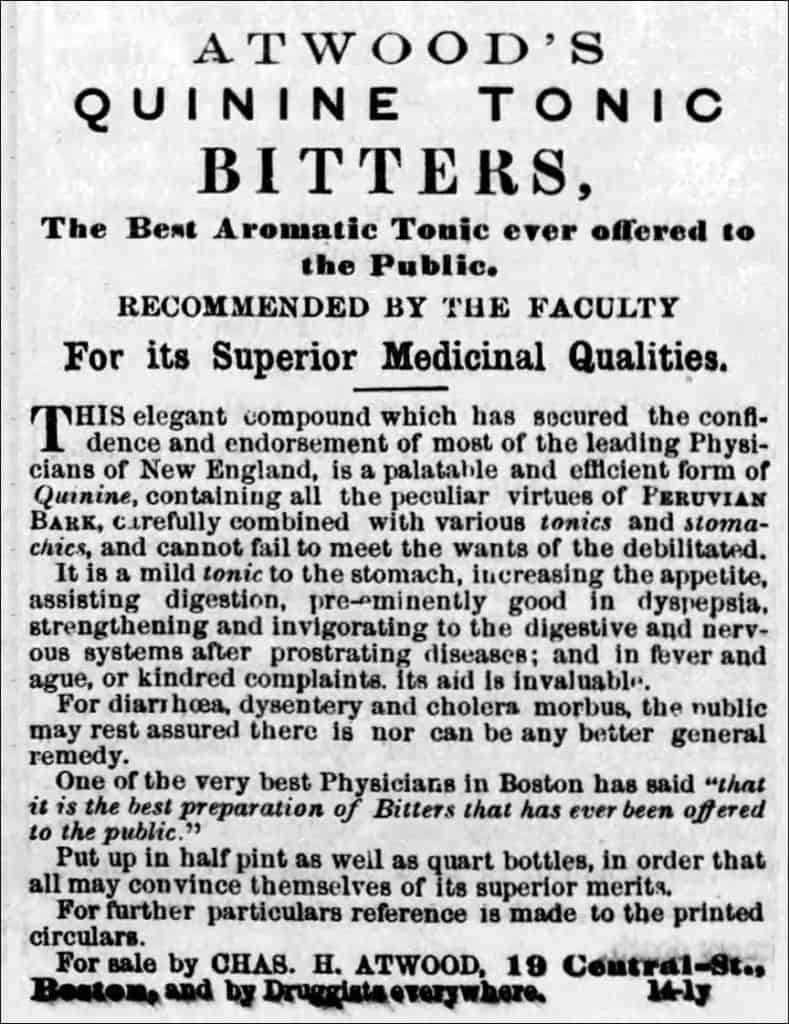 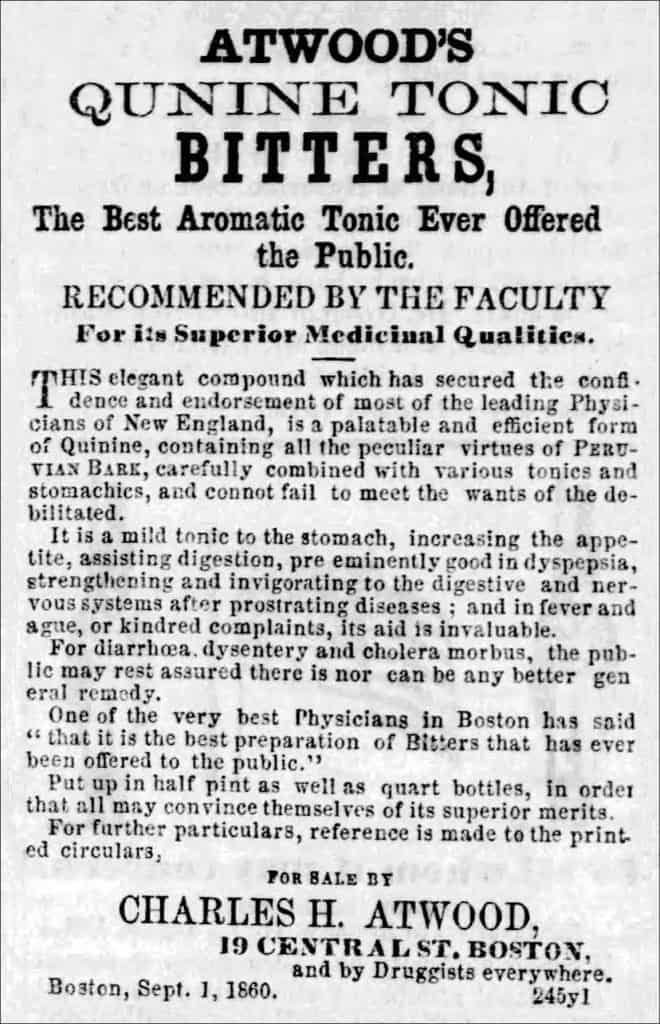 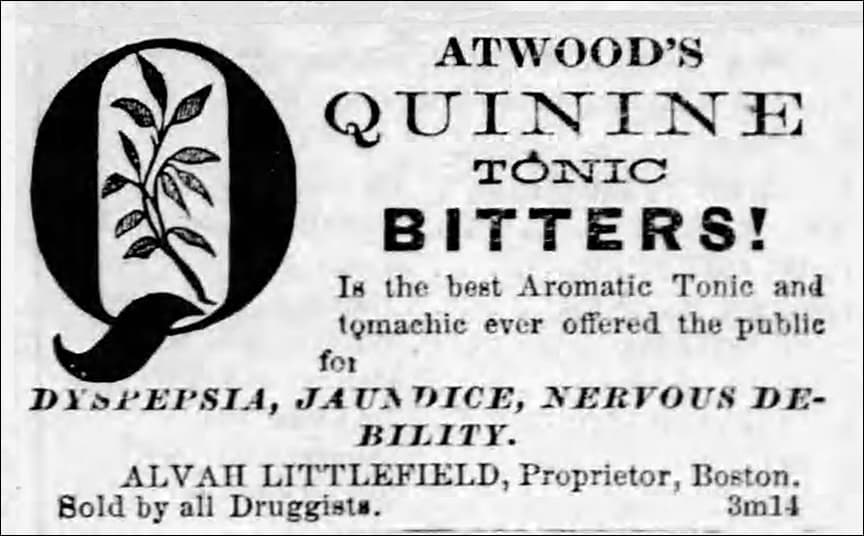 Ferdinand Meyer V is a native of Baltimore, Maryland and has a BFA in Fine Art and Graphic Design from the Kansas City Art Institute and School of Design. Ferdinand is the founding Principal of FMG Design, a nationally recognized design consultation firm. Ferdinand is a passionate collector of American historical glass specializing in bitters bottles, color runs and related classic figural bottles. He is married to Elizabeth Jane Meyer and lives in Houston, Texas with their daughter and three wonderful grandchildren. The Meyers are also very involved in Quarter Horses, antiques and early United States postage stamps. Ferdinand is the past 6-year President of the Federation of Historical Bottle Collectors and is one of the founding members of the FOHBC Virtual Museum.
View all posts by Ferdinand Meyer V →
This entry was posted in Advertising, Auction News, Bitters, Collectors & Collections, Color Runs, Druggist & Drugstore, History, Medicines & Cures, Tonics and tagged Alvah Littlefield, atwoods, auction, Bark, bitters bottles, Boston, Bottles and More, CH Atwood, Charles, chemicals, chemist, fluted, Galleria, Glass Works, label, Medicine, neck, Peruvian, Quinine, Tonic. Bookmark the permalink.