Amazing Film Clip of Cable Car In San Francisco In 1906 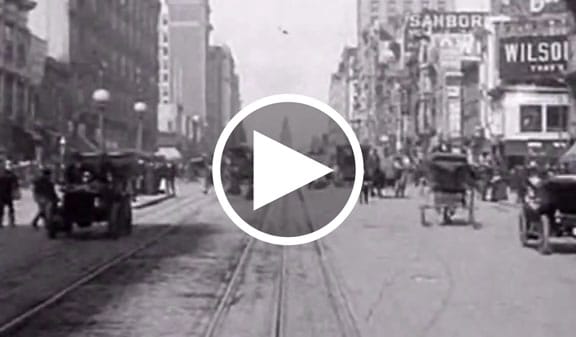 This film was “lost” for many years. It was the first 35mm film ever that has come to light. It was taken by a camera mounted on the front of a cable car as it was traveling down the street. You feel as if you are really there, standing at the front looking down the street, amazing piece of historic film.  The number of automobiles is staggering for 1906. Absolutely amazing! The clock tower at the end of Market Street at the Embarcadero wharf is still there. How many “street cleaning” people were employed to pick up after the horses? Talk about going green!

This film, originally thought to be from 1905 until David Kiehn with the Niles Essanay Silent Film Museum figured out exactly when it was shot. From New York trade papers announcing wet streets from recent heavy rainfall and shadows indicating time of year and actual weather and conditions on historical record, even when the cars were registered (he even knows who owned them and when the plates were issued!).. It was filmed only four days before the Great California Earthquake of April 18th, 1906 and shipped by train to NY for processing. Amazing, but true!

No wonder there had to be laws created to regulate driving habits. This is insane. Good thing they couldn’t go very fast. This is a fascinating movie. A camera on the front of a streetcar 104 years ago. I watched it a couple of times. Look at the hats the ladies were wearing and the long dresses. Some of the cars had the steering wheels on the right side, I wonder when they standardized on the left? Sure was still a lot of horse drawn vehicles in use. Mass transit looked like the way to get around. Looks like everybody had the right of way.

Perhaps the oldest “home movie” that you will ever see!

Ferdinand Meyer V is a native of Baltimore, Maryland and has a BFA in Fine Art and Graphic Design from the Kansas City Art Institute and School of Design. Ferdinand is the founding Principal of FMG Design, a nationally recognized design consultation firm. Ferdinand is a passionate collector of American historical glass specializing in bitters bottles, color runs and related classic figural bottles. He is married to Elizabeth Jane Meyer and lives in Houston, Texas with their daughter and three wonderful grandchildren. The Meyers are also very involved in Quarter Horses, antiques and early United States postage stamps. Ferdinand is the past 6-year President of the Federation of Historical Bottle Collectors and is one of the founding members of the FOHBC Virtual Museum.
View all posts by Ferdinand Meyer V →
This entry was posted in History, Humor - Lighter Side and tagged Bill O'Conner, cable car, Embarcadero, History, home movie, Market Street, San Francisco, Silent Film Museum. Bookmark the permalink.