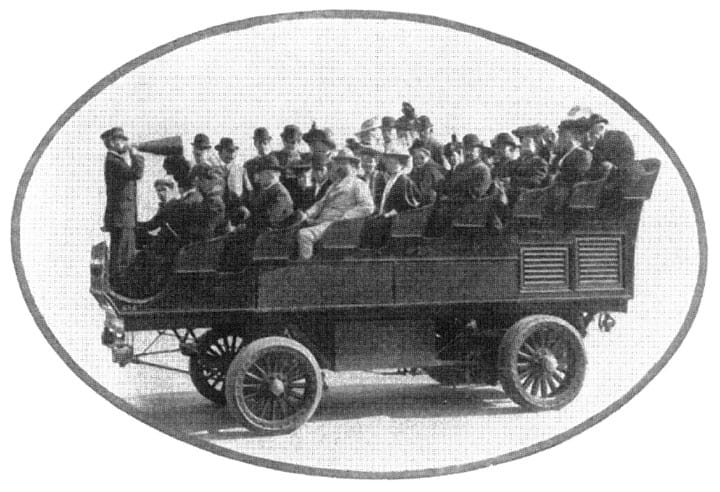 An example of a ‘rubberneck” automobile tour led by a “Megaphone Man”. Approximately thirty guests are taking this particular tour. Note the proximity of the guide to the guests. – Source F.T. Richards, Illustration for George Fitch’s “Seeing New York Through A Megaphone” from Ladies Home Journal (January 1907) 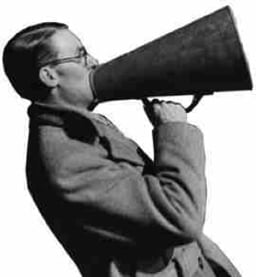 [Wikipedia] A megaphone or speaking-trumpet is a portable, usually hand-held, cone-shaped acoustic horn used to amplify a person’s voice or other sounds and direct it in a given direction. The sound is introduced into the narrow end of the megaphone, by holding it up to the face and speaking into it, and the sound waves radiate out the wide end. The megaphone increases the volume of sound by increasing the acoustic impedance seen by the vocal cords, matching the impedance of the vocal cords to the air, so that more sound power is radiated. It also serves to direct the sound waves in the direction the horn is pointing. It somewhat distorts the sound of the voice because the frequency response of the megaphone is greater at higher sound frequencies. Since the 1970s the voice-powered acoustic megaphone described above has been replaced by the electric megaphone, which uses electric power to amplify the voice.

This loudest horn was made of over 20 feet of copper and could supposedly project vocalizations as far as a mile and a half.

The initial inventor of the speaking trumpet is a subject of historical controversy, as both Samuel Morland and Athanasius Kircher lay claim to the device. Morland, in a work published in 1655, wrote about his experimentation with different horns and his most successful variant. This loudest horn was made of over 20 feet of copper and could supposedly project vocalizations as far as a mile and a half. 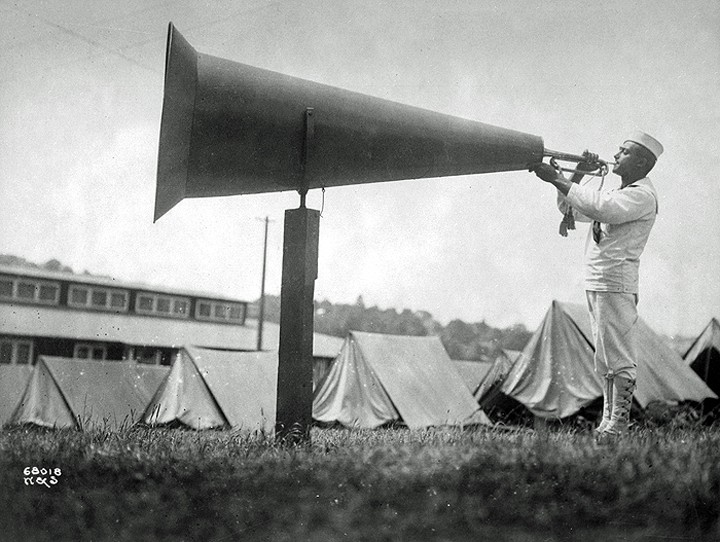 With the aid of a huge megaphone, installed at the top of a slope in one of the training camps, a single bugler is able to make his calls heard over the entire. area. The conical sound magnifier is about eight feet long and is pivoted to the top of a post set in the ground. The bugler places his instrument in the small end of the megaphone, and as he plays, slowly swings the latter through a wide arc. In the remotest sections of the camp the notes can be heard.

Twenty years earlier, Kircher described a device that could be used for both broadcasting on one end and “overhearing” on the other. His coiled horn would be wedged into the side of a building, connecting a speaker or listener inside with the surrounding environment.

Morland favored a straight, tube-shaped speaking device, where an initial sound would reverberate in waves through the instrument and gradually become louder. Kircher’s horn, on the other hand, utilized a “cochleate” design, where the horn was twisted and coiled, unlike Morland’s design. 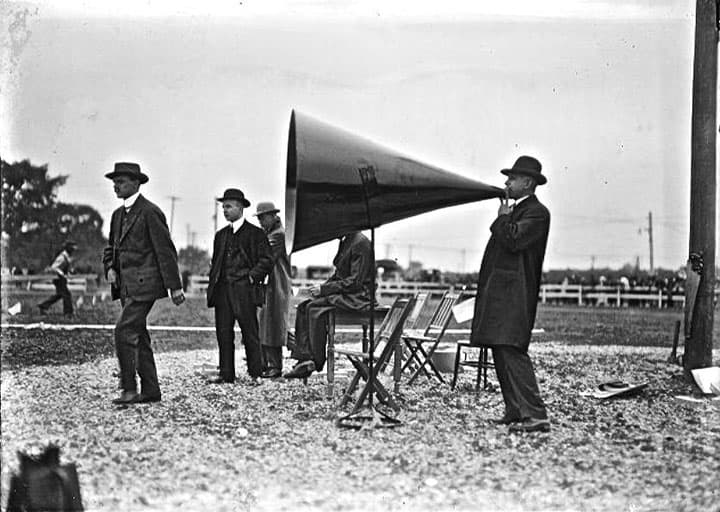 The term ‘megaphone’ was first associated with Thomas Edison’s instrument 200 years later. In 1878, Edison developed a device similar to the speaking trumpet in hopes of benefiting the deaf and hard of hearing. His variation included three separate funnels lined up in a row. The two outer funnels, which were six feet and eight inches long, were made of paper and connected to a tube inserted in each ear. The middle funnel was similar to Morland’s speaking trumpet, but had a larger slot to insert a user’s mouth.

With Edison’s megaphone, a low whisper could be heard a thousand feet away, while a normal tone of voice could be heard roughly two miles away. On the listening end, the receiver could hear a low whisper at a thousand feet away. However the apparatus was much too large to be portable, limiting its use. George Prescott wrote: “The principal drawback at present is the large size of the apparatus.” 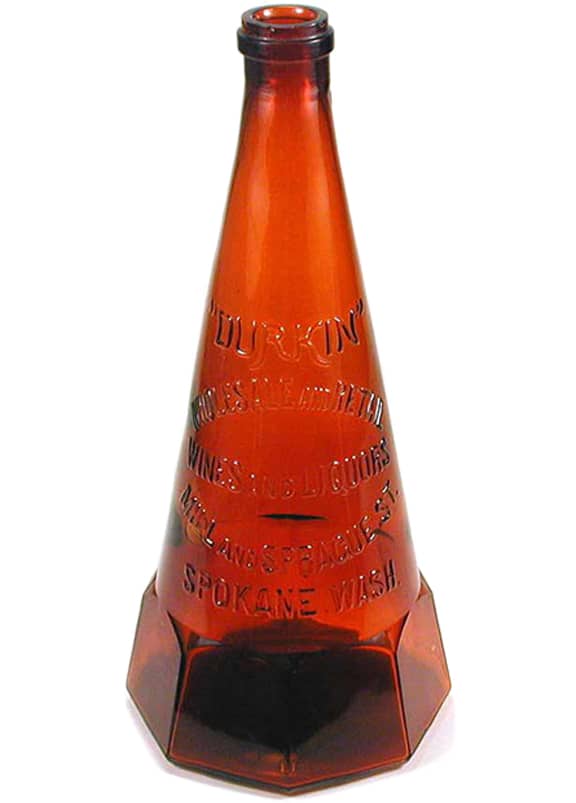 You typically run in to examples of these ‘megaphone’ form bottles at west coast shows such as the Los Angeles, Auburn, Canyonville or the Downieville events. It was nice to see a grouping in the last Glass Works Auctions | Auction #96 (Parts I and Part II). These examples came from the great John Feldmann collection in Long Island, New York if I am not mistaken. It is nice to group all of these together for comparison. The locales on the bottles include Spokane, Washington, Seattle, Washington, Portland, Oregon and Los Angeles, California. Definitely a west coast phenomena. Notice that American Bottle Auctions also has an example of a Star Wine Co. megaphone in their present Auction #57. 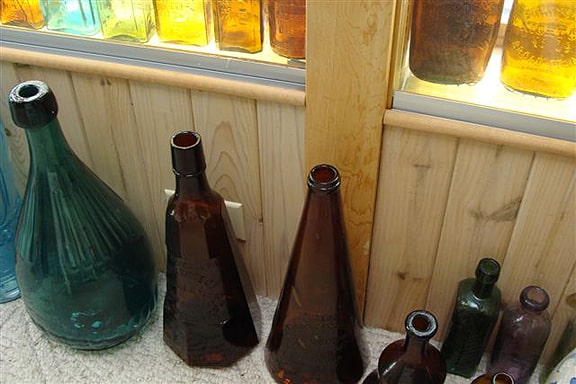 Here you can see an examples of the STAR WINE CO. and DURKIN megaphones on the perimeter floor corners in the great John Feldmann bottle room. 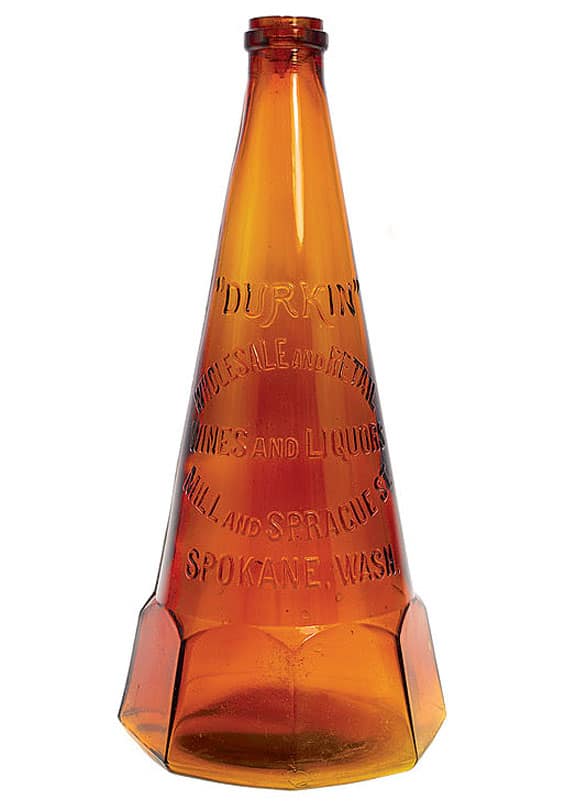 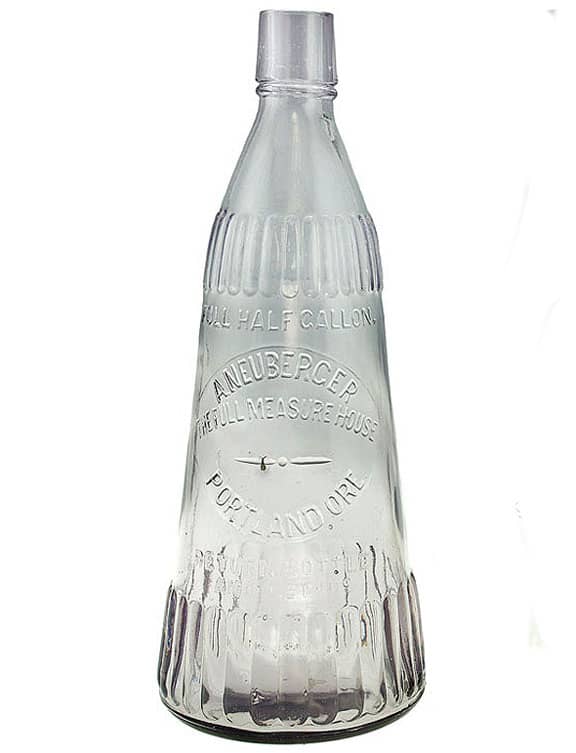 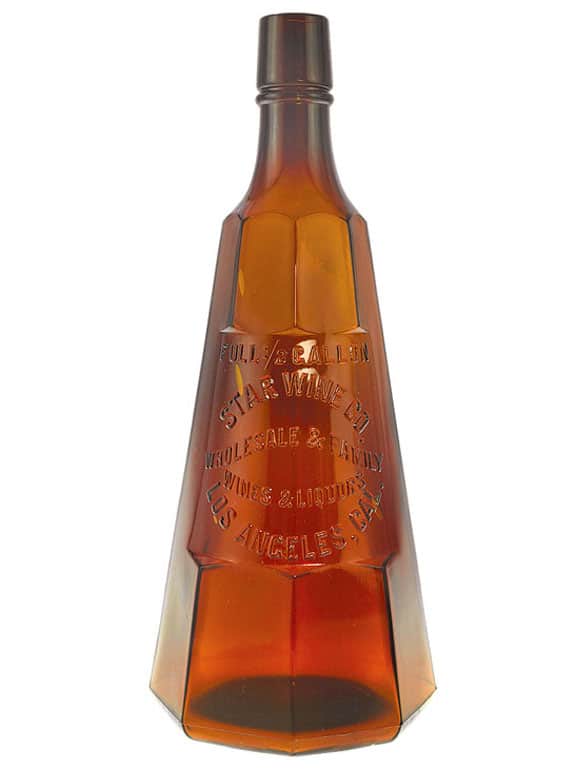 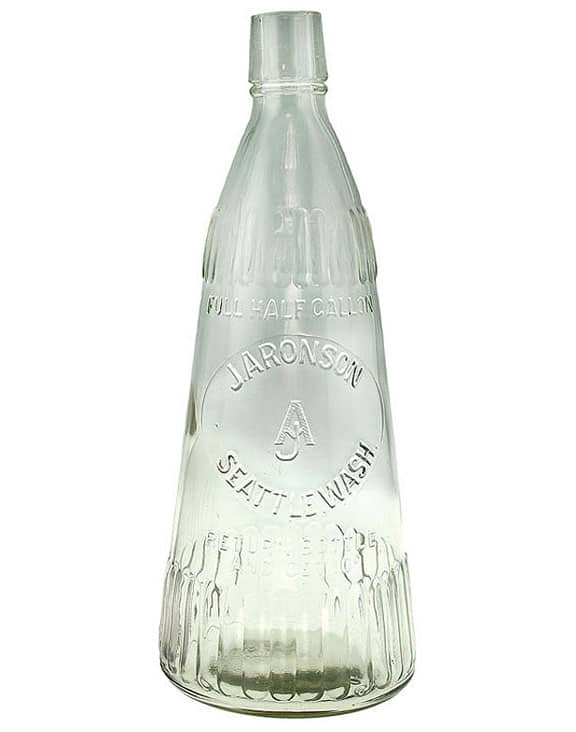 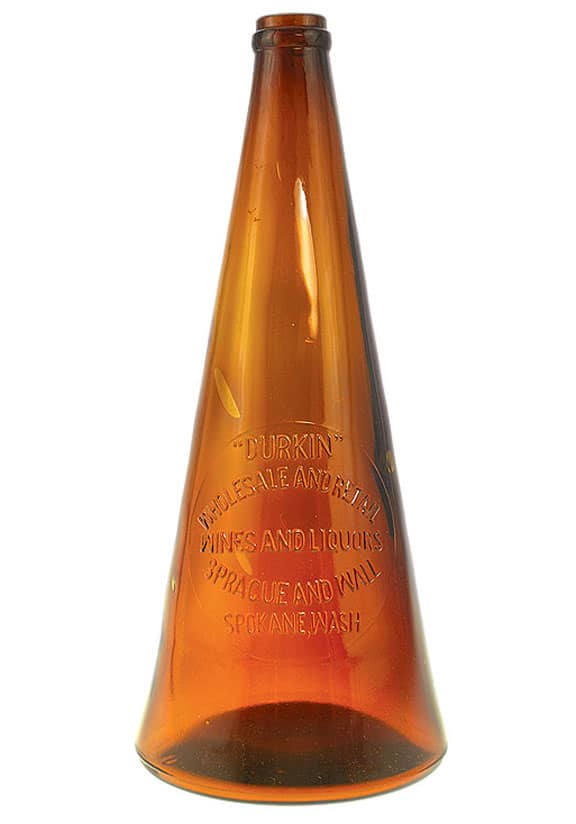 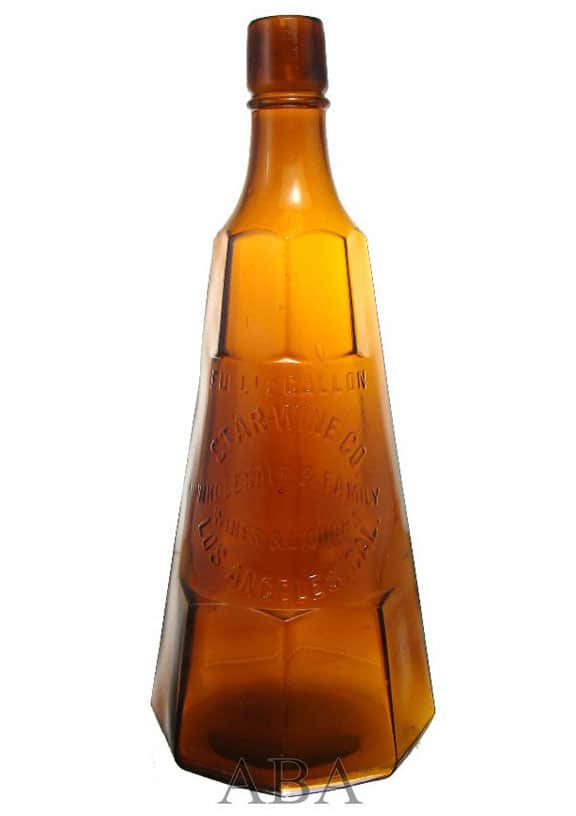 STAR WINE MEGAPHONE. LOS ANGELES, CAL. 13 ¾ inches. 8-sided base and shoulder. Tooled top. These large containers are quite rare as most likely they were a burden to cart around. – American Bottle Auctions | Auction #57 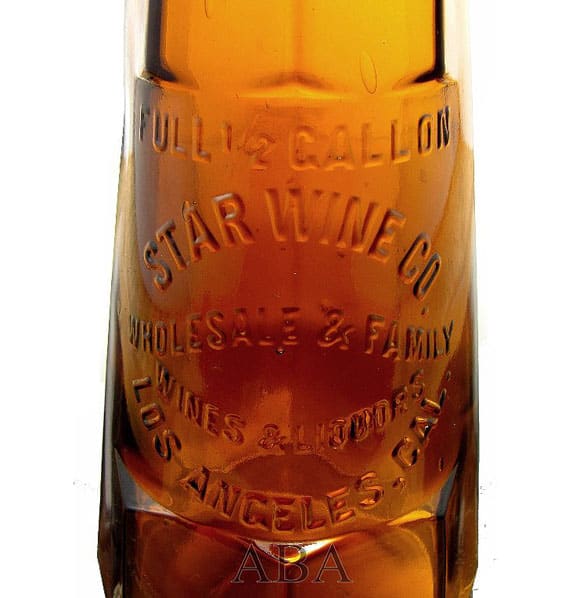 (Detail of above) STAR WINE MEGAPHONE. LOS ANGELES, CAL. 13 ¾ inches. 8-sided base and shoulder. Tooled top. These large containers are quite rare as most likely they were a burden to cart around. – American Bottle Auctions | Auction #57