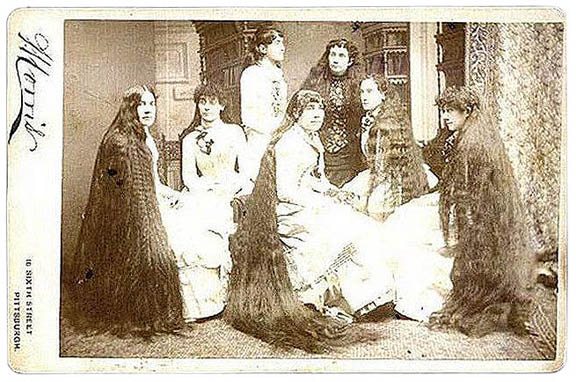 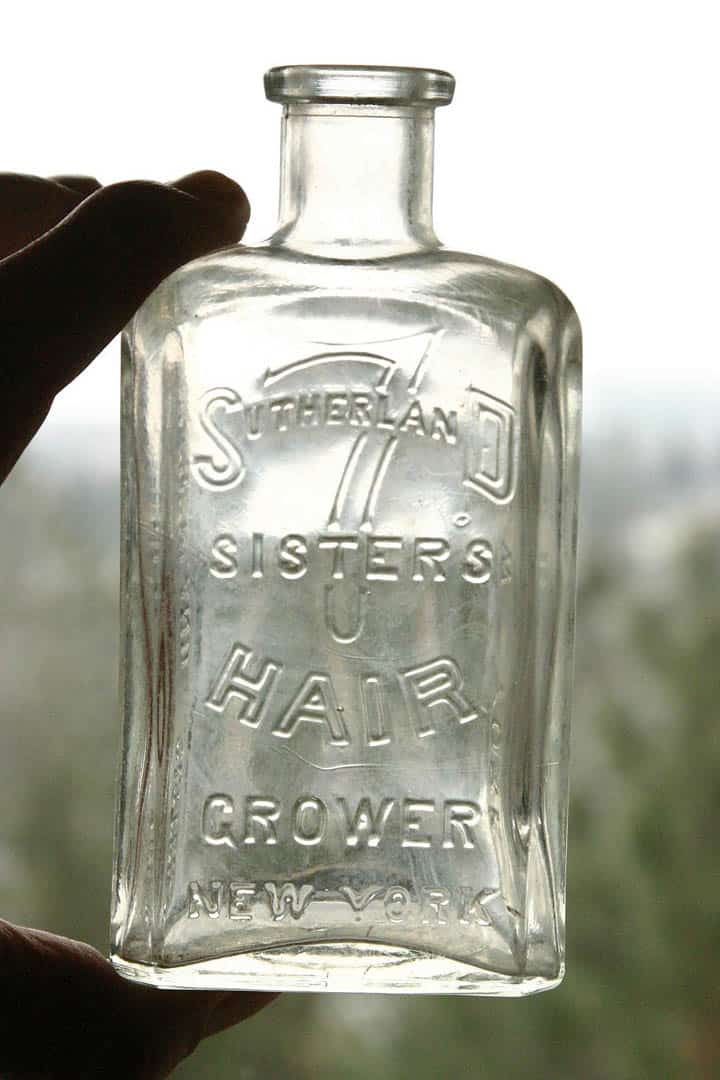 Tami Barber posted this really great picture (see top above) of the 7 Sutherland Sisters over on Bottle Collectors on facebook. This really caught my eye as I was intrigued by the hair and had never heard of the Sutherland Sisters. I took a moment to gather some information to round this out a bit. 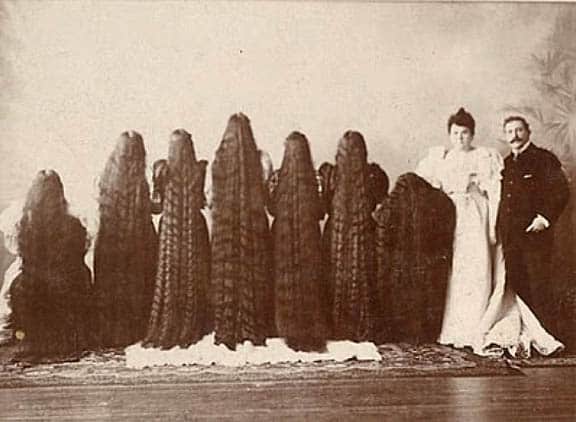 One of Niagara County’s historical attractions, apart from the Falls, is really not an attraction at all, but more like a family sensation. Calling Cambria, New York their home, The Seven Sutherland Sisters were world-famous for their incredible hair, which reportedly had a collective length of 37 feet. It is said that the sibling’s mother, Mary Sutherland, applied an ointment on the young girls’ hair to stimulate growth. Their classmates often complained of the offensive odor. 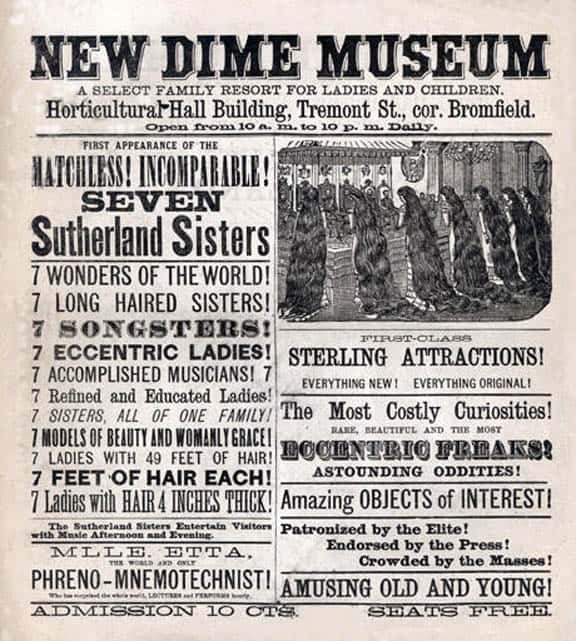 The Sutherland children were all musically inclined and performed around New York State as the “Sutherland Concert of Seven Sisters and One Brother.” In 1881, they entertained at the Atlanta Exposition in Georgia. Around 1884, when the Sisters were traveling with Barnum and Bailey’s Greatest Show on Earth, their father, Fletcher Sutherland, realized that crowds flocked to see the girls’ long hair more than their singing talents. He mixed together a liquid concoction that he called The Seven Sutherland Sisters Hair Grower. 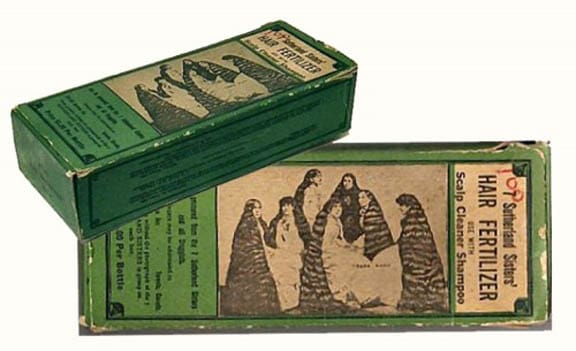 He sent a bottle to a chemist for an analysis and received the following testimonial:

“Cincinnati, Ohio, March, 1884: – Having made a Chemical Analysis of the Hair Grower prepared by the Seven Long Haired Sisters, I hereby certify that I found it free from all injurious substances. It is beyond question the best preparation for the hair ever made and I cheerfully endorse it. — J.R. Duff, M.D., Chemist.”

The Seven Sutherland Sisters Corp. bottled and distributed the Hair Grower from New York City and sold $90,000 worth of product the first year. They soon added a Scalp Cleanser, a Seven Sutherland Sisters Comb and eight shades of Hair Colorators. After achieving world-wide fame in 1893, the Sutherland Sisters spared no expense when building their new mansion on the Ridge Road just west of Warrens Corners. The house had 14 rooms, a marble lavatory with hot and cold running water, a turret, cupola and peaked gables, beds imported from Europe, black walnut woodwork, hardwood floors, massive chandeliers, as well as an attic room for the cook and maids.

On January 24, 1938, the mansion burned to the ground, taking many relics of The Sister’s glory days with it. The Sutherland family lived lives of extreme excess, and even though they earned millions of dollars in their lifetimes, they all died destitute of their riches. [Niagara County Historical Society] 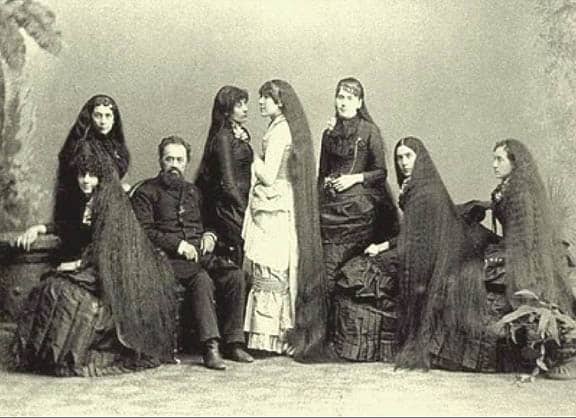 Fletcher Sutherland was born around 1817 in Vermont. His wife Mary, was born in New York around 1825. They eventually moved to Cambria, New York, where they resided for quite a few years. The two of them had seven daughters as follows: Sarah (1851), Victoria (1853), Isabella (1855), Grace (1859), Naomi (1861), Dora (1863), and Mary (1865). The girls (and a son) became a traveling family singing act known widely for, not only their singing, but also for the long hair they all sported (totaling 37 feet). At some point the awesome hair became such an attraction that they began travelling with Barnum & Bailey’s Show.

There’s been a lot of interesting stories about the relationship between the girls and the Baileys. Naomi married J. Henry Bailey in 1885, and they had 4 children. The Bailey of circus fame was actually James Anthony Bailey, and his original name wasn’t even Bailey. Harry Bailey (J. Henry), of Philadelphia registered a label for a “Hair Restorer” in 1883. In 1886 he registered labels for both a “Hair Grower,” and a “Scalp Cleaner.” He also registered a Trade Mark for Seven Sutherland Sisters “Hair Tonics or Washes” the same year (TM #12,994).

The label for the Hair & Scalp cleaner indicated that it was in powder form, and came in a box. Bailey claimed that he had been doing business in Philadelphia, and from place to place, and had been using the Trade Mark since 1884. Bailey also mentioned in the petition, that the preparation was made of “borax, salt, quinine, cantharides, bay rum, glycerine, rose water, alcohol, and soap.”

There is an amazing amount of info on the Sutherlands at: Long Hair Lovers. I found Seven Sutherland Sisters listed in New York in 1886 and 87 on W. 14th Street. The name “Seven Sutherland Sisters” and the picture of the seven above, were registered as Trade Marks in 1912, and they claimed to have been using the name since 1884. By 1912, they company was made up of J. Henry Bailey, and five of the sisters. Naomi Sutherland Bailey, and Victoria Sutherland Craw were both deceased by 1912. Also by that time, they were making other products such as a face-powder, and face-cream. The word “Colorator” was registered as a trademark in 1923, and they claimed at that time that the name had been used since 1900. Apparently Fletcher Sutherland died around 1888, and the business was in decline by 1907. The business was located at 18 Desbrosses in 1900, and at 59 Bank by 1908. In 1908, Grace was the Secretary, and Dora was the Vice President. The 1922 Montgomery Ward’s Catalog listed the Hair Grower in 8 ounce bottles. The products were still being advertised in 1930 by Seven Sutherland Sisters, 242 Bradhurst Ave., New York.

In 1893, the Pharmaceutical Era examined the Hair Grower and found it to contain about 56% water of witch hazel, 44% bay rum, and small amounts of salt, hydrochloric acid, and magnesia q.s. They determined that the hydrochloric acid was only to get rid of the yellowish color produced by the agitation of the Bay Rum, Witch Hazel, and Magnesia. It was added with the salt after the mixture was filtered. 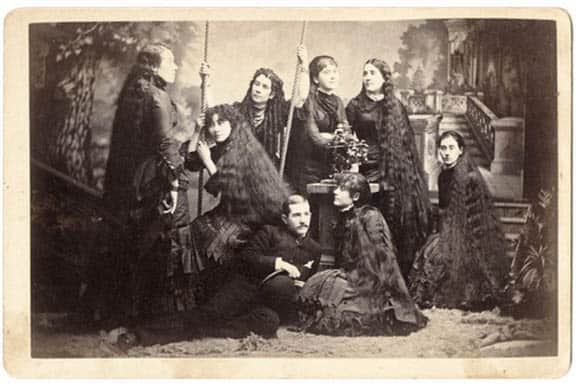 Read More: The Amazing Seven Sutherland Sisters And Their ‘Niagara Of Curls’ 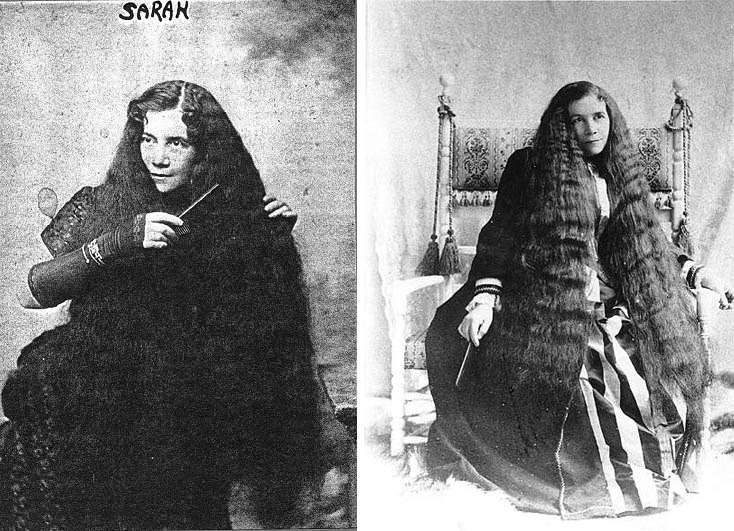 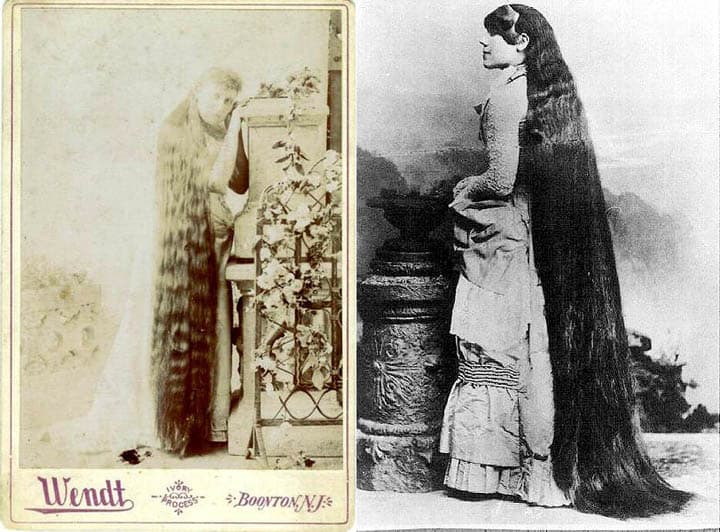 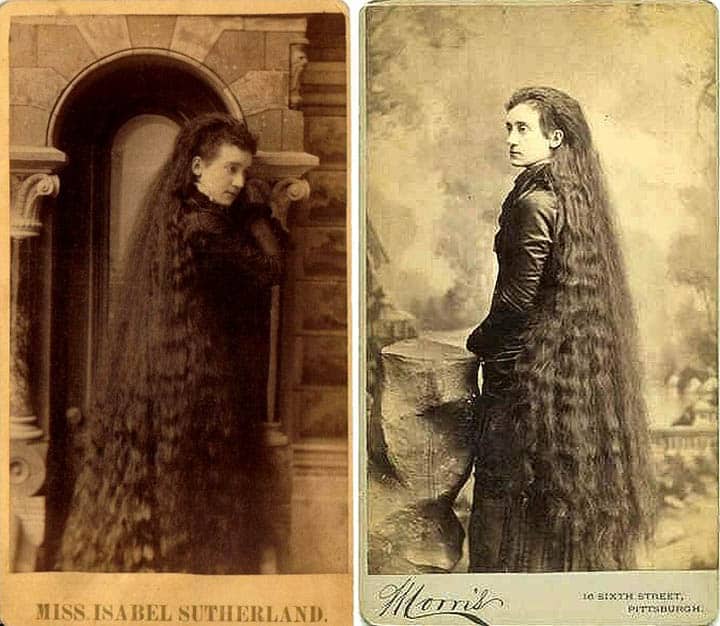 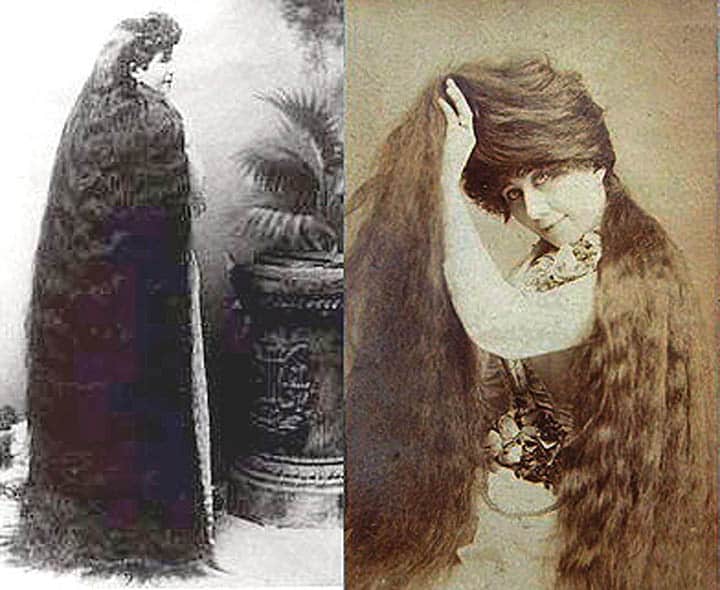 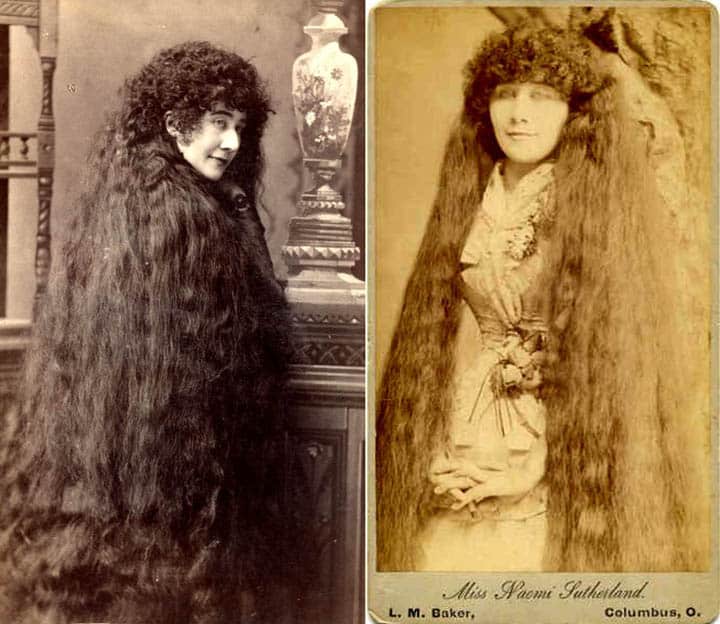 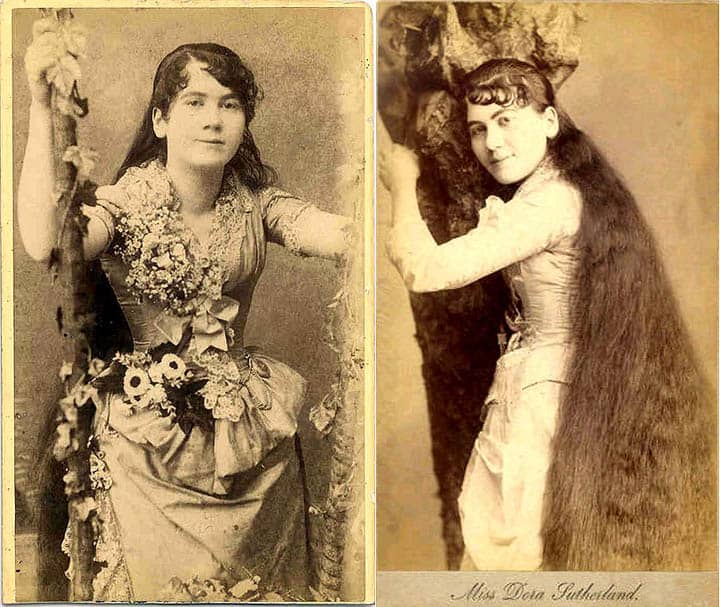 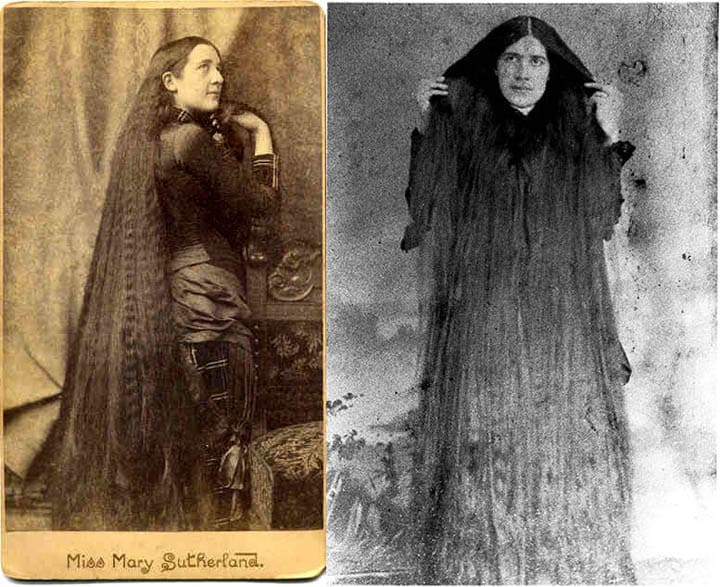