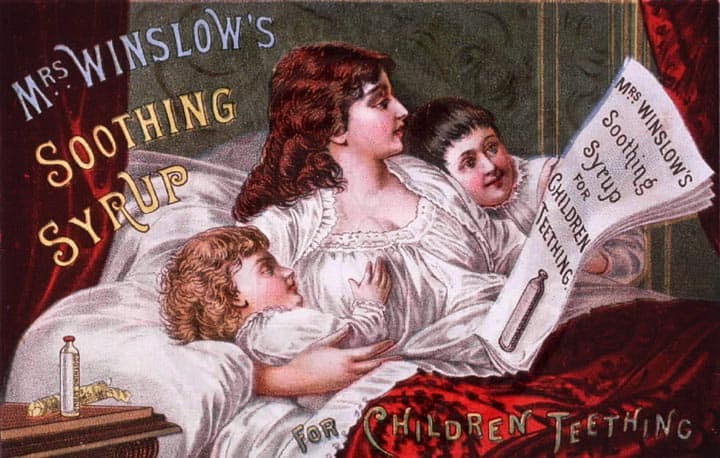 Mrs. Winslow’s Soothing Syrup – Courtesy of the US National Library of Medicine, an 1885 advertising image produced by Meyer, Merkell & Ottmann in New York. 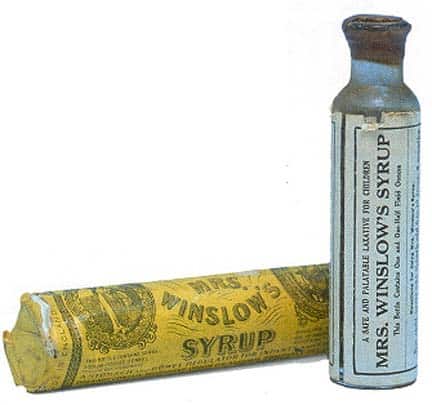 Mrs. Winslow’s Soothing Syrup was one of the most successful, famous or infamous medicines from our past and was called the “Baby Killer” by some. Sometime prior to 1844, a Mrs. Charlotte N. Winslow prepared this highly successful composition for children teething. History preserves that Mrs. Winslow was a midwife and studied infant teething and other related pains. In 1844, she gave the recipe to her son-in-law, Jeremiah Curtis and his partner Benjamin A. Perkins in Bangor, Maine who continued to manufacture and sell it under the name Mrs. Winslow’s Soothing Syrup. Curtis and Perkins were druggists in Maine who became the agents for this medicine in the 1840s.  They later moved their operation to New York City in the 1850s.

The formula consisted of Morphine Sulphate (an opiate analgesic related to heroin), sodium carbonate (water softener), spirits foeniculi (an alcohol that seems to be only associated with this product), and aqua ammonia  (a cleaning agent). I can not even begin to imagine what this may have tasted like. Probably wouldn’t matter. 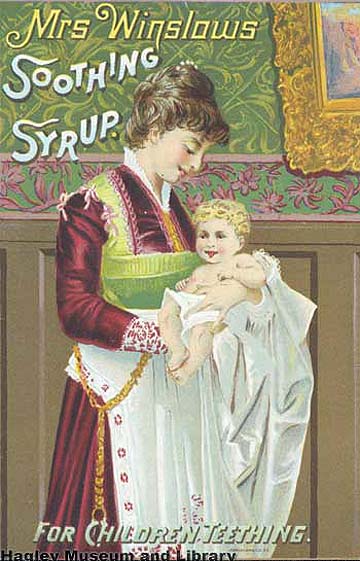 It was claimed that it was “likely to sooth any human or animal”, and it effectively quieted restless infants and small children. It was widely marketed in the United Kingdom and the United States – as well as newspapers, the company used various media to promote their product, including recipe books, calendars, and trade cards. [reference Wikipedia and A treatise on the Law of Trade-marks]

Common to bottle collectors are the cylindrical vials marked “Mrs Winslows – Soothing Syrup – Curtis & Perkins – Proprietors” which are about 5 inches tall and about 1-1/4″ in diameter.  They are found with both an open pontil mark as well as with a smooth base.  Earlier examples have an inwardly rolled lip which later became a better formed tooled square lip. [Historic Glasshouse] 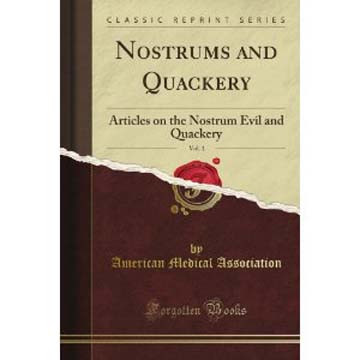 In 1911, the American Medical Association put out a publication called “Nostrums And Quackery” (pictured above) where, in a section called “Baby Killers”, it incriminated Mrs. Winslow’s Soothing Syrup. It was not withdrawn from sale in the UK until 1930. 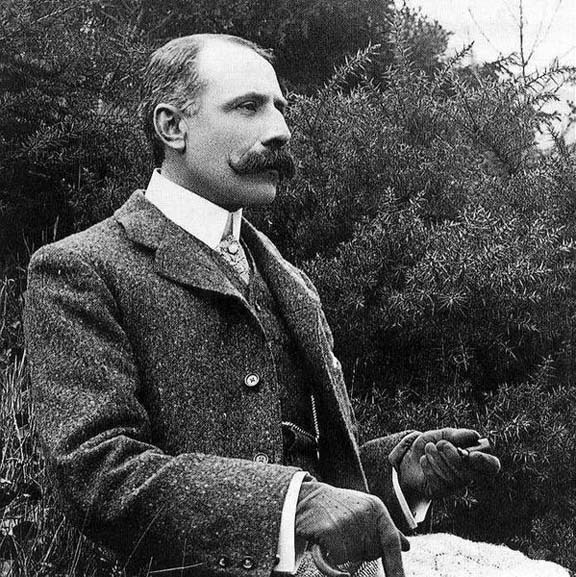 In 1879 the English composer Edward Elgar (pictured above) wrote an early musical work, part of his Harmony Music for a wind quintet, which he titled Mrs Winslow’s soothing syrup. 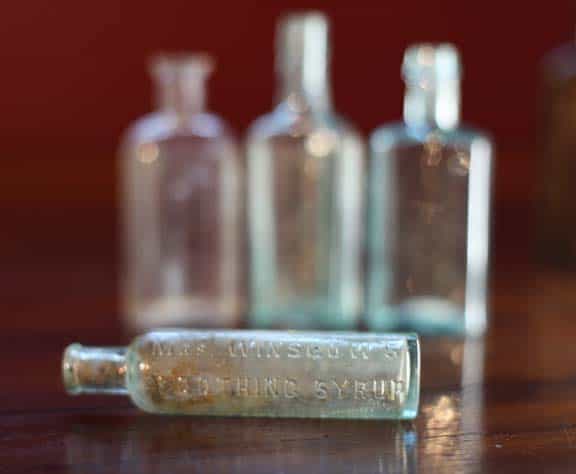 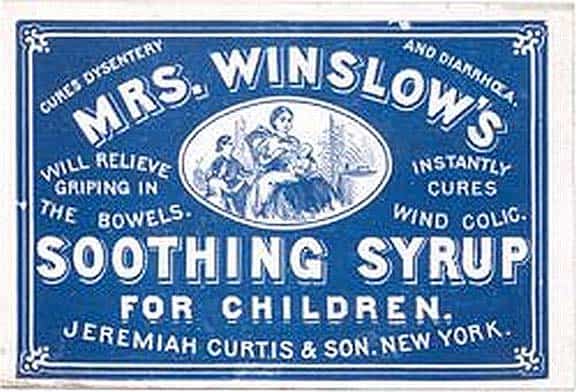 DEAR SIR: I am happy to be able to certify to the efficiency of MRS. WINSLOW’S SOOTHING SYRUP, and to the truth of what it is represented to accomplish. Having a little boy suffering greatly from teething, who could not rest, and at night by his cries would not permit any of the family to do so, I purchased a bottle of the SOOTHING SYRUP, in order to test the remedy, and, when given to the boy according to directions, its effect upon him was like magic; he soon went to sleep, and all pain and nervousness disappeared. We have had no trouble with him since, and the little fellow will pass through with comfort the excruciating process of teething, by the sole aid of MRS. WINSLOW’S SOOTHING SYRUP Every mother who regards the health and life of her children should possess it.

Having passed several sleepless nights, disturbed by the agonies and cries of a suffering child, and becoming convinced that MRS. WINSLOW’S SOOTHING SYRUP was just the article needed, procured a supply for the child. On reaching home, and acquainting his wife with what he had done, she refused to have it administered to the child, as she was strongly in favor of Homoeopathy. That night the child passed in suffering, and the parents without sleep. Returning home the day fellowing, the father found the baby still worse, and, while contemplating another sleepless night, the mother stepped from the room to attend to some domestic duties, and left the father with the child. During her absence he administered a portion of the SOOTHING SYRUP to the baby, and said nothing. That night all hands slept well, and the little fellow awoke in the morning bright and happy. The mother was delighted with the sudden and wonderful change, and, although at first offended at the deception practiced upon her, has continued to use the SYRUP, and suffering, crying babies, and restless nights, have disappeared. A single trial of the SYRUP never yet failed to relieve the baby and overcome the prejudices of the mother.

Millions of bottles of MRS. WINSLOW’S SOOTHING SYRUP are now used every year in the United States for children teething, with never-failing success. Relief is IMMEDIATE and CERTAIN.

MRS. WINSLOW’S SOOTHING SYRUP is sure to regulate the bowels.

Orders are coming in every day from druggists in all parts of the country, “Send me more of MRS. WINSLOW’S SOOTHING SYRUP.”

Millions of bottles of MRS. WINSLOW’S SOOTHING SYRUP are sold every year in the United States.

Give us an old nurse for diseases incident to the period of teething in children. Here you have that old nurse for 25 cents, in the form of MRS. WINSLOW’S SOOTHING SYRUP.

MRS. WINSLOW’S SOOTHING SYRUP is sold by all druggists throughout the United States.

HIGHLY IMPORTANT TO MOTHERS. — MRS. WINSLOW’S SOOTHING SYRUP is the only thing that you can rely upon to give relief to yourself, and relief and health to your infant.

MRS. WINSLOW’S SOOTHING SYRUP has been the means of restoring the drooping spirits of many mothers.

This is the season of the year to use MRS. WINSLOWS SOOTHING SYRUP.

To every mother who has children suffering from any of the complaints incident to the period of teething, we say do not let your own prejudices, or the prejudices of others, stand in the way of the relief that will be sure — yes, absolutely sure — to follow the use of MRS. WINSLOW’S SOOTHING SYRUP.

Sold by druggists throughout the world.

Price only 25 cents per bottle. 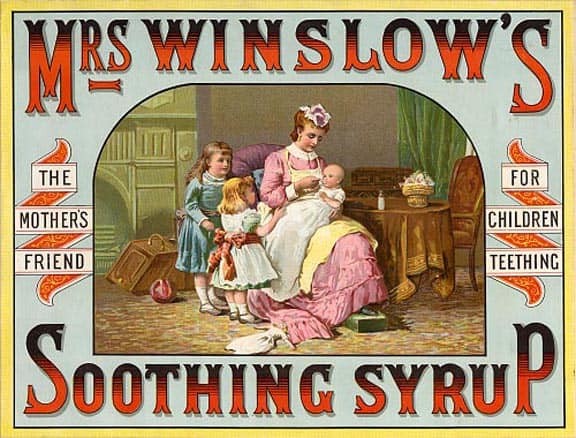 Mrs. Winslow’s Soothing Syrup was a medicine for children that was thought to cure illnesses and prevent children from crying. Made up of a mix of alcohol, morphine, and opium, this ‘medicine’ was soon outlawed by the federal government in 1906. Information provided by – US History, Pathways To the Present 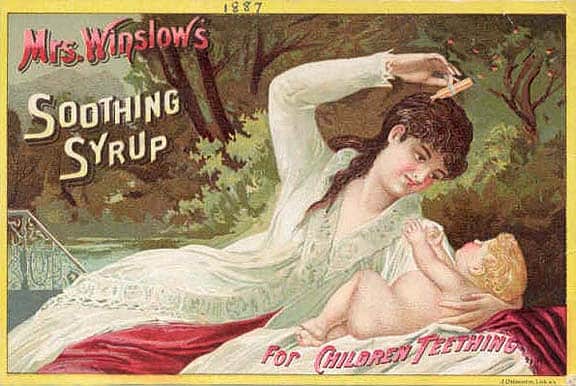 Mrs. Winslow’s Soothing Syrup trade card – “For children teething. Greatly facilitates the process of Teething, by softening the gums, reducing all inflammation; will allay ALL PAIN and spasmodic action, and is SURE TO REGULATE THE BOWELS. Depend on it, Mothers, it will give rest to yourselves and RELIEF AND HEALTH TO YOUR INFANTS. Sold by all chemists, at 1s 1/2d per bottle.” 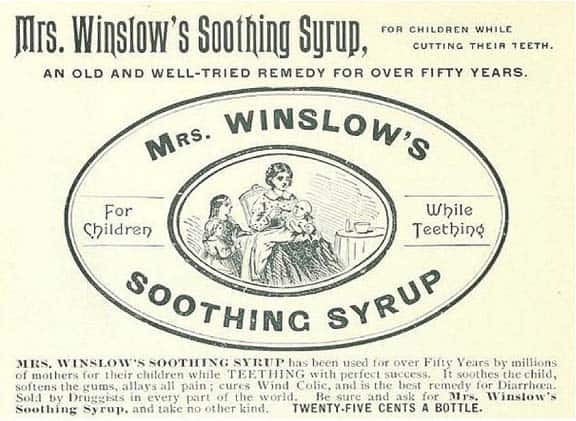 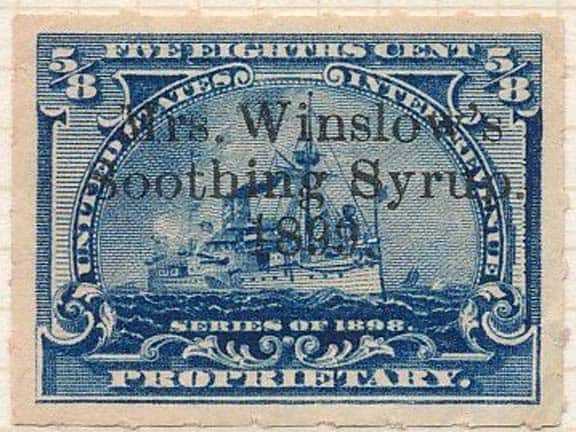 The tax for all proprietary articles sold for more than 15 cents and up to 25 cents was 5/8 cent. Mrs. Winslow’s was only offered in one size bottle and so Anglo-American only ordered printed cancels on 5/8 cent stamps. Mrs. Winslow’s Soothing Syrup. 1899. Type 2 – 1898 Revenues 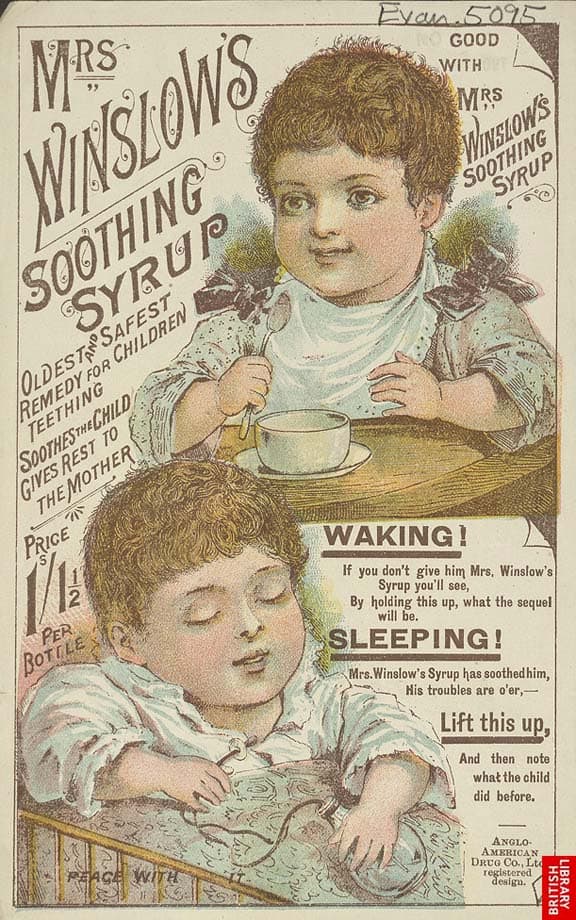 This is an advertisement for ‘Mrs Winslow’s Soothing Syrup‘, this medicine was given to babies to soothe them when they were teething. It softened gums and reduced inflammation and was widely used. One problem was that it actually contained Opium. During the 19th century Opium was frequently used, poets such as Byron and Shelly indulged in ‘laudanum’, an alcoholic drink containing opium and medicines such as ‘Mrs Winslow’s Soothing Syrup’ were used to treat every sort of illness from colds to heart disease. The addictive properties of Opium were eventually recognised and it was banned, except for use in medicine. – British Library 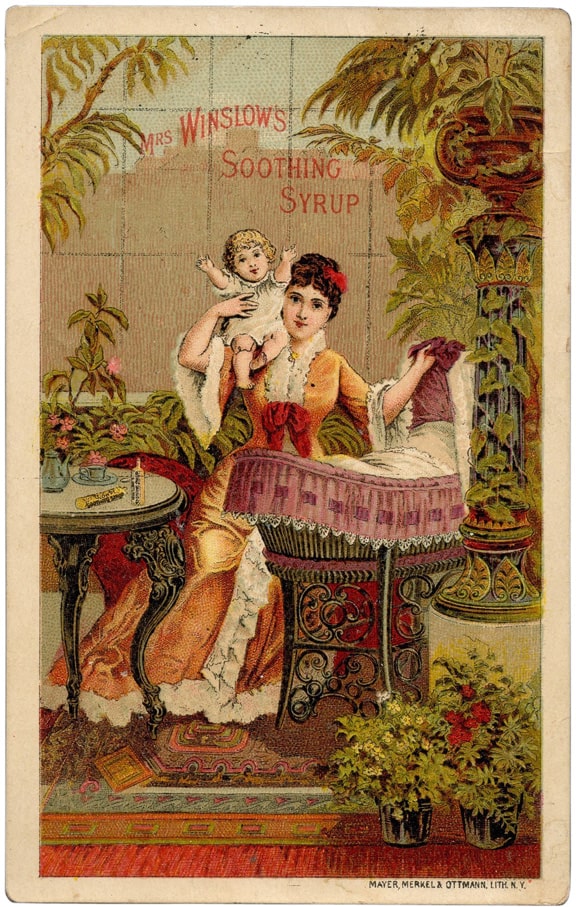