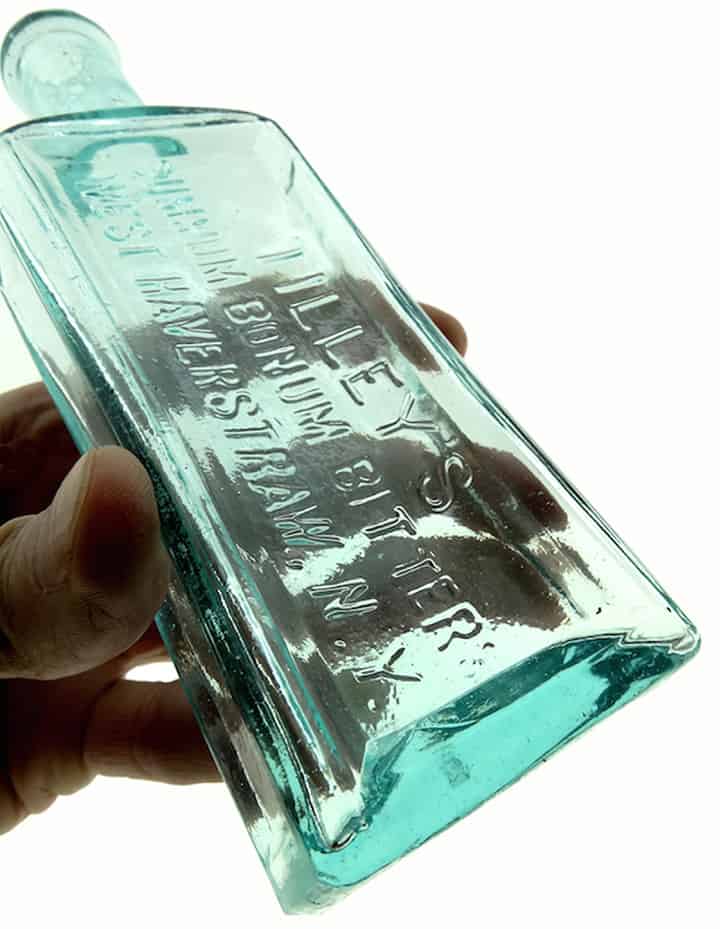 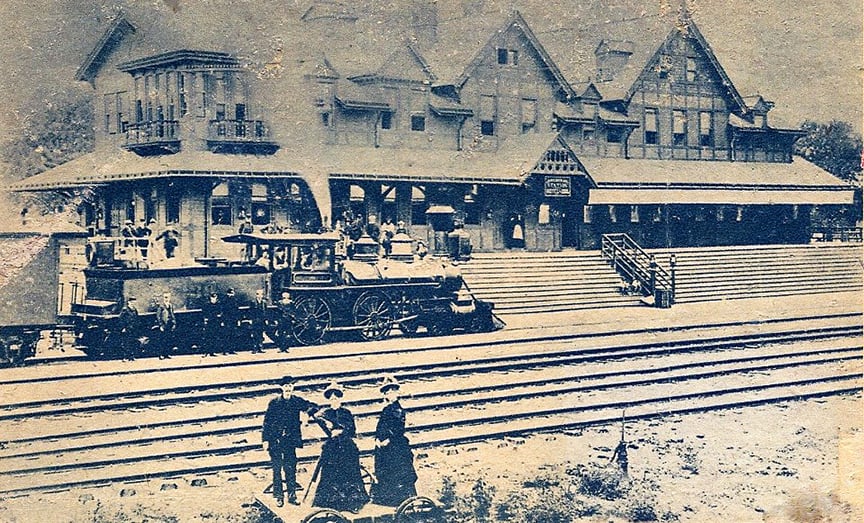 The first thing I wondered here was why “Summum bonum” would be embossed on the Tilley’s Sunnum Bonum Bitters bottle from West Haverstraw, New York. Actually this was not my first thought. My first thought was being amazed that this bottle even showed up on Jeff Wichmann’s American Bottle Auctions Sale Page page. It sold in the blink of an eye to some lucky purchaser as the ABA web site locked up and I could not secure the bottle. Boy-oh-boy is this bottle rare. Only one recorded shard exists and there is scant information in Bitters Bottles. 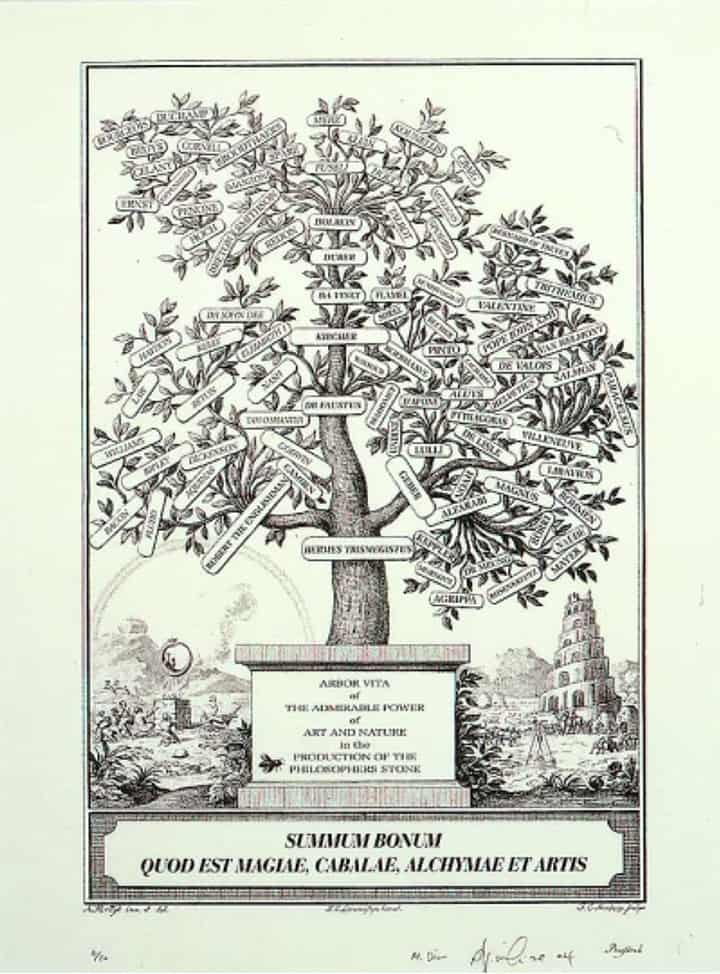 Summum bonum is a Latin expression meaning “the highest good”, which was introduced by Cicero, to correspond to the Idea of the Good in Ancient Greek philosophy. The summum bonum is generally thought of as being an end in itself, and at the same time as containing all other goods.

West Haverstraw is a village incorporated in 1833 in the town of Haverstraw, Rockland County, New York. It is located northwest of Haverstraw village, east of Thiells, south of the hamlet of Stony Point, and west of the Hudson River. 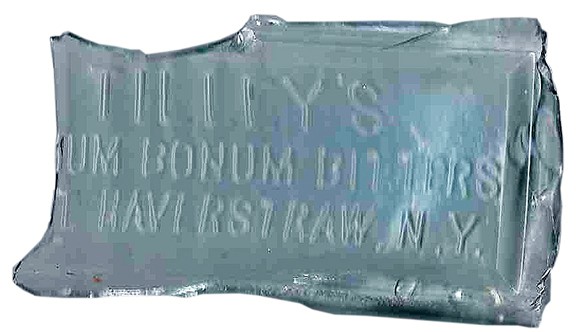 A partial Carlyn Ring and W.C. Ham listing in Bitters Bottles is listed below as only a fragment exists of this extremely rare bitters (see above). We can now update this information. 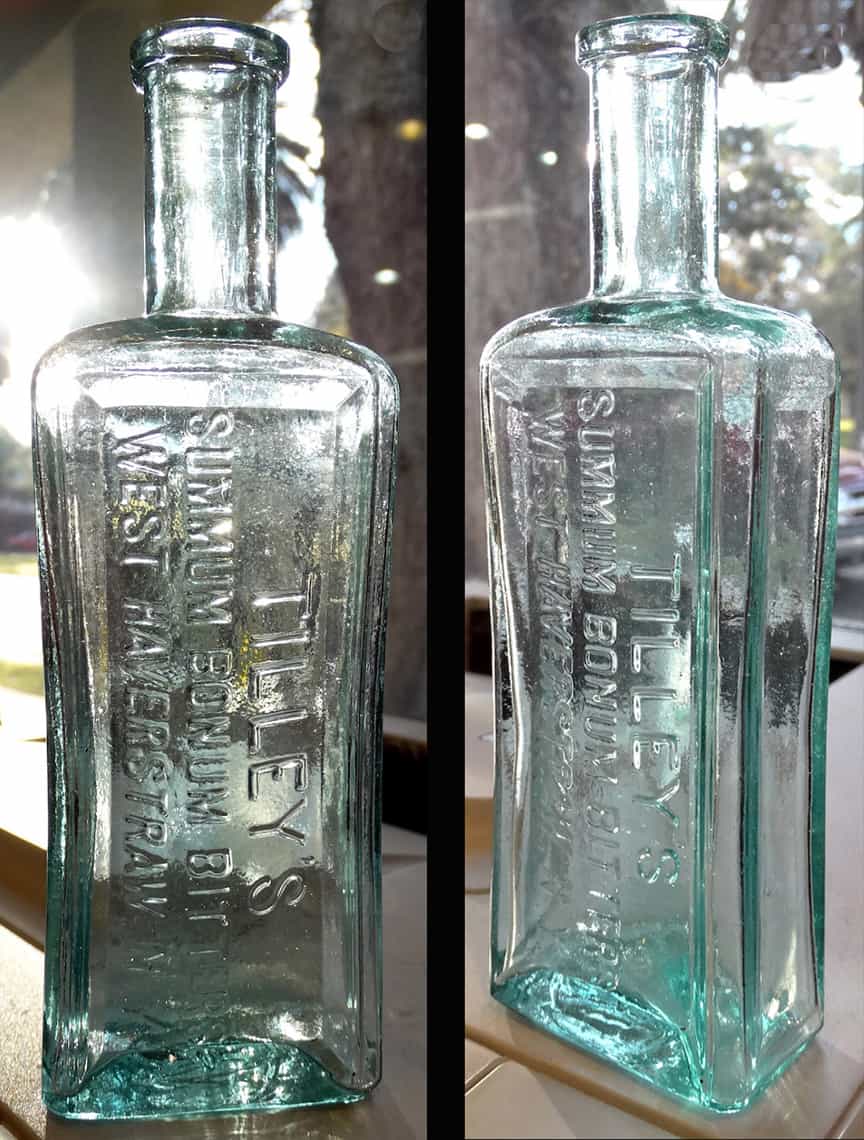 TILLEY’S SUMMUM BONUM BITTERS WEST HAVERSTRAW, N.Y. Tooled top, 7”. (T 29) Here’s a bitters that is listed in Ring/Ham as being so rare only pieces have survived. There could have been others to appear however, nonetheless it is still extremely rare. Not a purple or green however, just an aqua medicine looking tooled top bitters that would fit in with any rare bitters collection. Condition is terrific, both sides of the panels are pushed in and the bottle appears quite crude. Grades a 9.7. – American Bottle Auctions Sale Page

I am really having a hard time tying this bottle to a specific person in New York. West Haverstraw is a tiny town and this bitters was only made for a short run as can be surmised from no surviving examples. Here below are a few Tilley candidates. I suspect I may get some help solving this one so stay tuned.

Sir Samuel Leonard Tilley, PC, KCMG (May 8, 1818 – June 25, 1896) was a Canadian politician and one of the Fathers of Confederation. Tilley was descended from United Empire Loyalists on both sides of his family. As a pharmacist, he went into business as a druggist. He was 13 in 1831 when he left to live in Portland with relatives and apprentice as a druggist in adjoining Saint John. In May 1838, a certified pharmacist, he went into partnership with a cousin, Thomas W. Peters, to open Peters and Tilley, “Cheap Drug Store!” When Peters retired in 1848 it became Tilley’s Drug Store, one of the more successful commercial operations in the city. By 1860 politics had taken over Tilley’s life, however, and he sold the business.

1898: C. E. Tilley, the druggist who assigned some six weeks since, and whose store on Reading Road was sold out, has obtained a position in the Board of City Affairs, Cincinnati – The Pharmaceutical Era, Volume 19

Marianne Dow sent in the following Tilley Summum Borum (Bonum) Bitters Company advertisement that led to finding a second listing for Tilley’s Sonnum Borum Bitters. From these, we can see that J. B. Tilley organized the company in New Berlin, N.Y. and sold the bitters in 1900.

Another listing for the company. 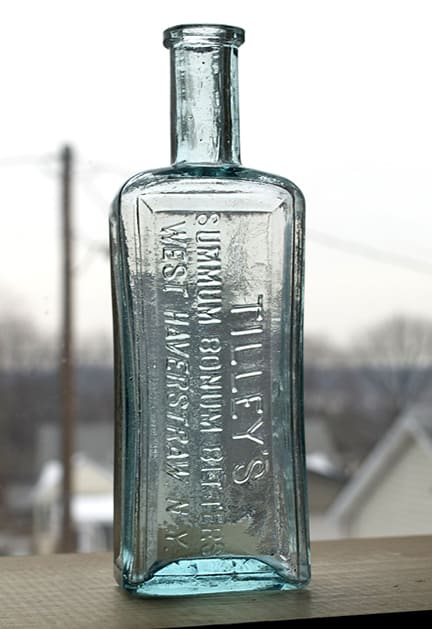 Ferdinand Meyer V is a native of Baltimore, Maryland and has a BFA in Fine Art and Graphic Design from the Kansas City Art Institute and School of Design. Ferdinand is the founding Principal of FMG Design, a nationally recognized design consultation firm. Ferdinand is a passionate collector of American historical glass specializing in bitters bottles, color runs and related classic figural bottles. He is married to Elizabeth Jane Meyer and lives in Houston, Texas with their daughter and three wonderful grandchildren. The Meyers are also very involved in Quarter Horses, antiques and early United States postage stamps. Ferdinand is the past 6-year President of the Federation of Historical Bottle Collectors and is one of the founding members of the FOHBC Virtual Museum.
View all posts by Ferdinand Meyer V →
This entry was posted in Bitters, History, Medicines & Cures, Questions and tagged bitters, Bonum, Dow, Haverstraw, New Berlin, New York, Summum, Tilley, Wichmann. Bookmark the permalink.