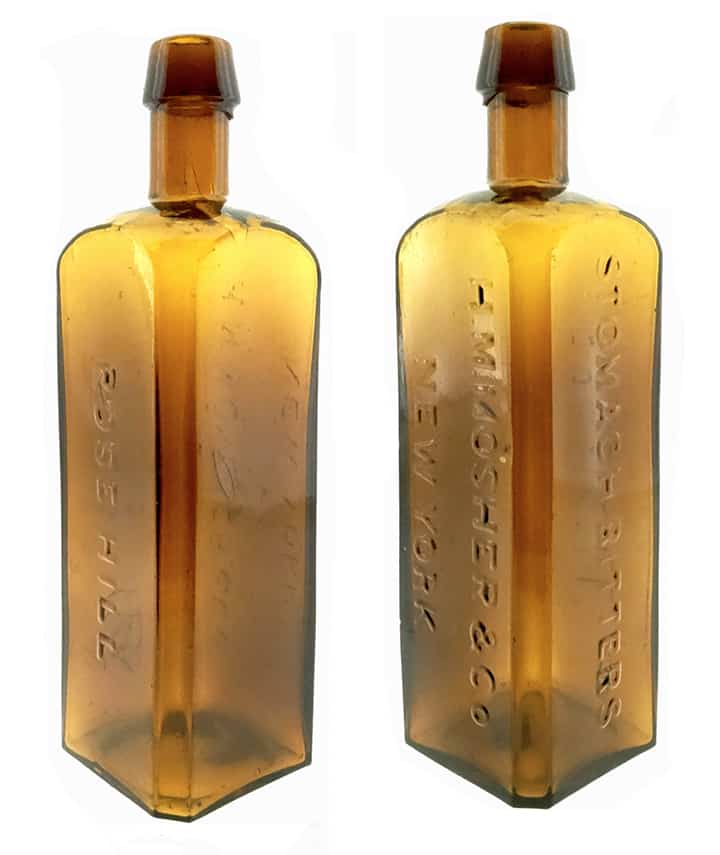 Rose Hill Stomach Bitters from New York made by H. M. Mosher & Company. That is pretty much all we really have on this one. The actual bottle, the name, some bottle pictures by Jeff Wichmann and a listing in Carlyn Ring and W.C. Ham’s Bitters Bottles book that does not match. I suspect the listing has a typographical error. Bill Ham may want to track down the original notes for the listing.

My interest in this bottle occurred when I opened an e-mail from American Bottle Auctions announcing some great bottles for sale on their new Store Page. I immediately noticed the Rose Hill Stomach Bitters and that it had already been sold. Disappointing. You have to move fast sometimes. Next, almost within minutes, I received an e-mail from early American glass collector, Michael George saying he had purchased the Rose Hill. Small world really. Good for Mike.

I thought this would be a quick, mystery solved, kind-of-thing, but this one is tough. There are various H. M. Mosher listings in United States, many Moslier listings but none that I can tie to the bottle. The closest I got, whether right or wrong were these passages from History of Parish, NY, from Landmarks of Oswego County, 1895

In 1832 Dr. Austin White, the first physician in town, became a resident, and the same year a post route was established from Camden to Colosse, passing through Parish. Mail was carried each way once a week, the carriers being Cyrus H. Harvey and Dexter Howard. Ephraim E. Ford was appointed the first postmaster and held the office until his removal in 1856. Among his successors were Charles H. Edick, Charles F. Trowbridge,W. H. Baker, E. D. Edick, William B. Harter, and Burr J. Morgan. incumbent. The first lawyer, Archibald N. Ludington, settled in Parish in 1848 and remained three years. Among the oldtime merchants were the Mosher Brothers.

The first store was built and opened by Ephraim E. Ford in 1829, who kept it until 1856. For a time Mr. Ford was in partnership with Paul W. Allen. The building was eventually enlarged and occupied by the Mosher Brothers.

Rose Hill, Manhattan: Rose Hill is a neighborhood in the New York City borough of Manhattan, surrounded by the neighborhoods of Murray Hill to the north and Gramercy Park to the south. It straddles Manhattan Community Boards 5 and 6.

Watts’ Rose Hill in the Bronx: The designation “Rose Hill” is also used in The Bronx, where Rose Hill Park is a vestige of a far larger estate once called “Rose Hill” by its owner, Robert Watts, and Rose Hill Campus is part of the site of Fordham University.

The Watts farms “Rose Hill”: According to a historical genealogical source, the first “Rose Hill” was the farm acquired from James DeLancey in November 1747 by the Hon. John Watts (1715–1789), who represented the city for many years in the Colonial Assembly. It contained over 130 acres which lay on the East River between what were to become 21st and 30th streets and between the future 4th Avenue and the water.

Ferdinand Meyer V is a native of Baltimore, Maryland and has a BFA in Fine Art and Graphic Design from the Kansas City Art Institute and School of Design. Ferdinand is the founding Principal of FMG Design, a nationally recognized design consultation firm. Ferdinand is a passionate collector of American historical glass specializing in bitters bottles, color runs and related classic figural bottles. He is married to Elizabeth Jane Meyer and lives in Houston, Texas with their daughter and three wonderful grandchildren. The Meyers are also very involved in Quarter Horses, antiques and early United States postage stamps. Ferdinand is the past 6-year President of the Federation of Historical Bottle Collectors and is one of the founding members of the FOHBC Virtual Museum.
View all posts by Ferdinand Meyer V →
This entry was posted in Bitters, History, Questions and tagged bitters, George, Hamilton, hill, Mosher, Moslier, New York, Rose, Stomach, Wichmann. Bookmark the permalink.