I wish someone would find me a Newfoundland Bitters 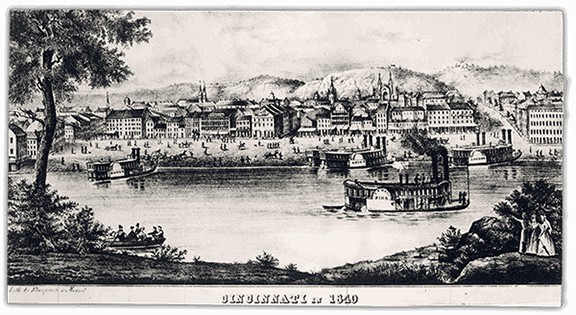 I wish someone would find me a Newfoundland Bitters

Sitting lonely, in the Carlyn Ring and W.C. Ham Bitters Bottles book, is a listing for N 21 NEWFOUNDLAND BITTERS, The Daily Picayune (New Orleans) April 4, 1869. I had seen this listing before and even came across a Galveston, Texas advertisement, further below, that I tucked away for another day. I certainly thought we had a southern and maybe a Texas bitters. That is not the case.

Newfoundland Bitters was made from 1869 to 1874, at least that is when the product was advertised in newspapers and places like The Times-Picayune (New Orleans, Louisiana), The Ouachita Telegraph (Monroe, Louisiana), The Galveston Daily News (Galveston, Texas) and Mississippi. The 1872 advertisements say, “It is now but two years since The Newfoundland Bitters has been offered to the public”.

What we do know, is that it was made in Cincinnati by Dexter & Sons and heavily exported to the south.

There are no recorded bottle examples. Most of us bitters collectors think that this is probably a labeled bitters. Probably so, but you can not dismiss the other examples of unlisted and embossed bitters bottles that periodically show up each year. Who knows? Someone, please find me a Newfoundland Bitters.

This story can really be summed up in one word, “Dexter”.

Edmund Dexter was a member of the Unitarian Church and was a true liquor baron who was born in 1801 in England. Some past records even list him as Baron Edmund Dexter. Dexter moved to Cincinnati in the 1820s and by 1829, he was a partner in the firm of Harvie and Dexter (Arthur Harvie and Edmund Dexter), grocers, at 18 Lower Market. He was also an importer of liquors and rectifiers of whiskey. The advertisement below says, “Dexter’s Whiskey, Known in the Southern Market since 1826”, showing that he was exporting lots of whiskey from Cincinnati at a rather young age. In 1831 he is listed alone as Edmund Dexter, liquors, 18 Lower Market. He stays at this location throughout the 1830s and 40s selling groceries and liquor. By 1850 he is at 49 and 51 Sycamore as Dexter & Sons. They are listed as retail and wholesale liquor dealers and rectifiers. In 1857. Dexter & Sons’ products included Old Dexter (established by Edmund Jr.), Arlington, Holmesdale Rye, Quaker Seal, Target Rye and Old A. Keller. 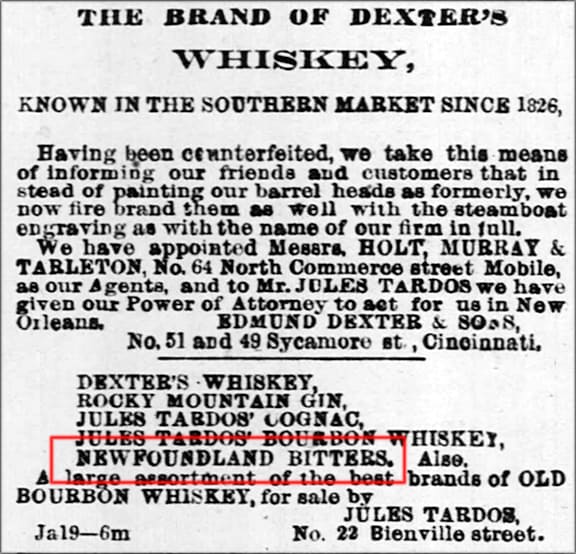 In the early 1800s, rectifiers played and important role in how whiskey was distilled, marketed and sold. Dexter bought barrels of raw whiskey from many sources in Kentucky, Indiana and Ohio and distilled it on the premises at 18 Lower Market in Cincinnati.

He would then provide restaurants, hotels, taverns, grocers and other establishments with the product. As mentioned earlier, he was shipping out and selling his whiskey and bitters in Texas and Louisiana. Many of the folks down south, did not even realize they were drinking an Ohio product from Dexter. At that time his whiskey was clear and the color of vodka. Later with the use of charred barrels, would the more amber color of whiskey be sold.

The distillation of liquors in the state of Ohio has always been the greatest in Cincinnati which ranked third in the industry in 1900. The industry was carried on in Ohio at least as early as 1808 when whiskey was sent from Cincinnati to New Orleans for distribution in the south.

What were the ingredients in the Newfoundland Bitters? It was probably based on whiskey, with whiskey flavoring with a dash of whiskey. None of the botanic bitters ingredients here. They even advertised it as a liquor but said you had to take it like a medicine and not abuse it. Just between meals, before meals of if you needed a stimulant, or if you wanted to get rid of certain malaise. Yeah, uh-huh. If it walks like a duck….

Edmund married his wife Mary Ann who was a New Yorker and they had five sons: Charles, Edmund Jr., George, Julius and Adolphus and four daughters. One report said, “He has been in America long enough, and had been financially successful enough, to have developed contacts all the way to Washington, D.C.”. Edmund Sr. died at the age of 61 in 1862 in Cincinnati. According to one newspaper entry, Dexter left each of his sons “a liberal fortune.” 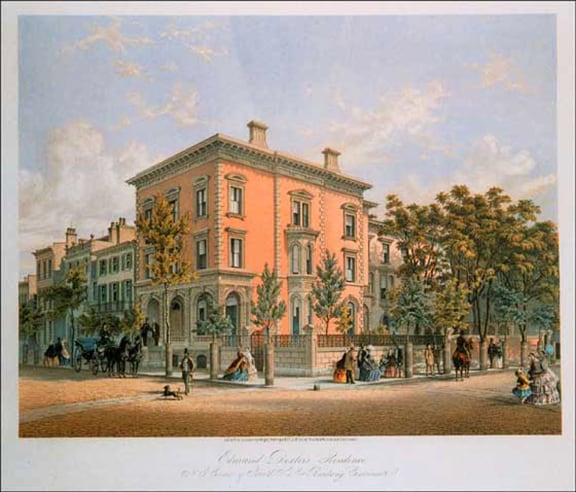 The Dexter mansion at Fourth and Broadway streets in Cincinnati was one of the city’s finest and hosted many a mover and shaker, including Charles Dickens in 1842 and the Prince of Wales (later Edward VII, the King of England) in 1860. The mansion became the headquarters of Western and Southern Life Insurance, which razed it in 1914.

Charles Dexter was born on January 17, 1830 and graduated from Harvard College in the Class of 1851 receiving the usual Bachelor of Arts degree. He would clerk for his father in 1853 and received his masters degree in 1867. Charles was an East Walnut Hills gentleman-father. He would run the family liquor business with his father and brother Edmund, Jr.

Edmund Dexter Jr. (1835-1879), the second of the three Cincinnati Dexter sons, lived downtown and also ran Dexter & Sons. He traveled to England numerous times. He and his wife, Emma R., had three children: Emma C., who died of whooping cough at age 5; John, who died of diphtheria at the age 6; and Edmund V. Dexter, who lived to be 50. Emma R. was an accomplished concert singer who performed in Music Hall. According to his Spring Grove Cemetery death card, Edmund Jr. succumbed to “consumption of bowels,” meaning ulceration and inflammation due to tuberculosis.

George Dexter (1838-83) was a fraternity man, a Harvard law graduate and a world traveler and distinguished literary historian. He married a young Boston woman and had three daughters, Helen, Mary and Margaret, over a five-year period. They settled in Cambridge, Mass. A physical description of George in his 1868 passport papers resembles that of Charles, except he was about two inches taller. The accompanying image, from Harvard’s Fobb Museum was taken in Cincinnati when George was 20.

Julius Dexter (1840-98), was a lawyer and was the fourth of Edmund’s five sons. He graduated from Harvard, worked in the family business as a clerk from 1860 to 1862, served a short stint in the Civil War where he was commissioned as a first lieutenant in the One Hundred and Sixth Ohio Volunteers, was a state senator and ran for governor on the Gold-Democrat ticket the year before his death. Of the three sons who stayed in Cincinnati, Julius, who was single, was a visible civic leader. He belonged to numerous boards and held executive positions in several agencies and societies, including the Literary Club. He was president of the Cincinnati, Hamilton and Dayton Railway Co., chaired the Music Hall building committee and managed the city’s finances as president of the Board of Trustees of the Sinking Fund. It was said that Julius, described in an extensive obituary by The Enquirer as a “capitalist,” became so wealthy he stopped accepting compensation for his work during the last 20 years of his life. He died suddenly of heart disease.

Adolphus Dexter (1841-70) graduated from the Naval Academy and served in the Civil War. Afterward, he married a New Yorker, settled into a mansion in New Rochelle, N.Y., and had a daughter named Bertha in 1868. His cause of death is listed as typhoid pneumonia, but an Aug. 24, 1870, Enquirer story quotes a New York Sun report that Adolphus had been overexposed to the sun, fell ill and shot himself in the head at his home. “Possibly his brain had been affected by the excessive heat,” the Sun reported. He is buried in Green-Wood Cemetery in Brooklyn.

With the death of liquor baron Edmund Dexter and the end of the Civil War, renowned Cincinnati architect James Keyes Wilson created a magnificent Gothic Revival funerary chapel and mausoleum for the family at Spring Grove Cemetery in 1869. It took him four years, from 1865 to 1869, to design and build which may have been inspired by the famous Parisian church, Sainte-Chapelle or the Chinchester Cathedral in England. The flying buttresses and pure size make the mausoleum unique and a popular site to visit. 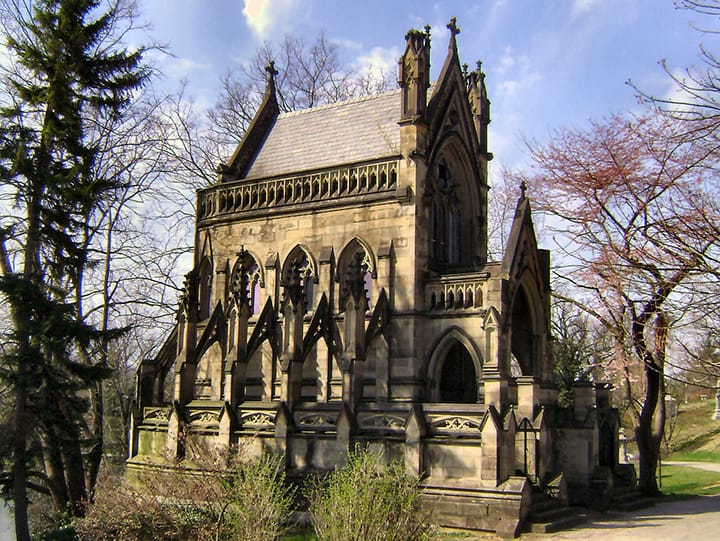 Behind the locked door to the top level is a marble-lined chapel that is 12 feet wide, 30 feet long and 34 feet high. The lower level crypts contain 12 marble catacombs where four generations of Dexters reside. Up to 20 people from the family are buried within. There is even an unused lift or elevator within. In the 1870s, buggy-riding Cincinnatians swarmed the cemetery to see the structure according to a report in The Cincinnati Enquirer.

Ferdinand Meyer V is a native of Baltimore, Maryland and has a BFA in Fine Art and Graphic Design from the Kansas City Art Institute and School of Design. Ferdinand is the founding Principal of FMG Design, a nationally recognized design consultation firm. Ferdinand is a passionate collector of American historical glass specializing in bitters bottles, color runs and related classic figural bottles. He is married to Elizabeth Jane Meyer and lives in Houston, Texas with their daughter and three wonderful grandchildren. The Meyers are also very involved in Quarter Horses, antiques and early United States postage stamps. Ferdinand is the past 6-year President of the Federation of Historical Bottle Collectors and is one of the founding members of the FOHBC Virtual Museum.
View all posts by Ferdinand Meyer V →
This entry was posted in Advertising, Bitters, History, Liquor Merchant, Medicines & Cures, Whiskey and tagged Adolphus, bitters, Charles, Cincinnati, Dexter, Edmund, Galveston, George, grocer, Harvie, Julius, Kentucky, liquor, Louisiana, mansion, New Orleans, Newfoundland, ohio, rectifier, Southern, texas, Whiskey. Bookmark the permalink.