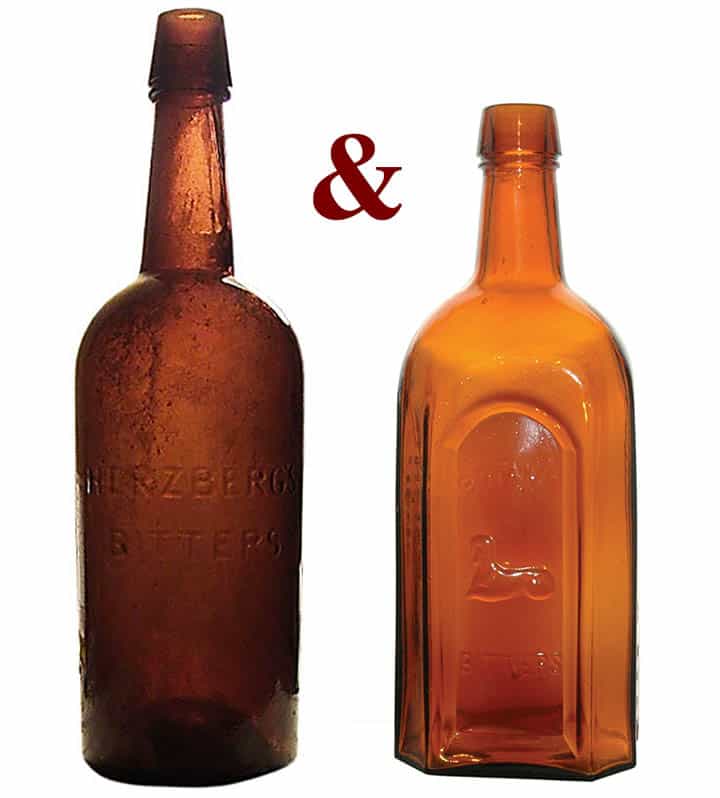 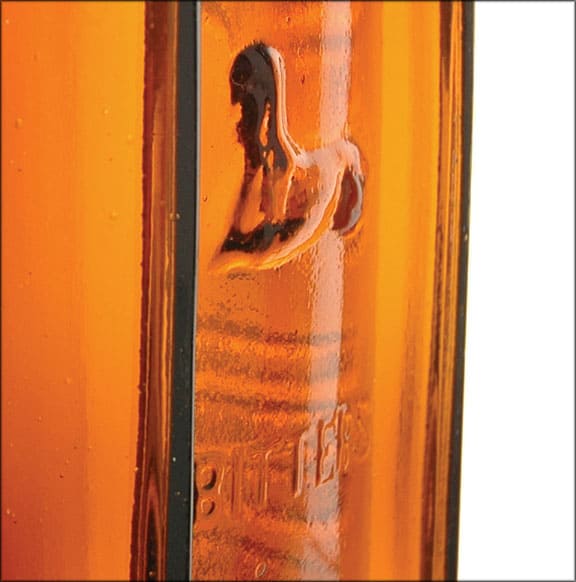 I haven’t thought about my Botanic Bitters (pictured on right above) until I received the below e-mail from a fellow with a Herzberg’s Bitters cylinder (pictured on left above). The name “Herzberg” is common on both bottles. I wonder if they are related? The e-mail:

My name is Harry and I am a novice antique bottle collector. If you could be so kind, I would like to know some information on this 11.5 in tall, amber fifth whiskey style bottle embossed Herzberg’s Bitters. I have been trying to find information on this bottle for some time but have not had any luck. The only thing that I can come up with this that a there is another bottle embossed Botanic Bitters Herzberg Bros. New York but that bottle is completely different from this one. I have been told that this bitters is in the Carlyn Ring & W.C. Ham Bitters Bottle book but I do not have a copy of it. Is this an uncommon bitters bottle? I do not know if this helps but I bought this in southeast PA. 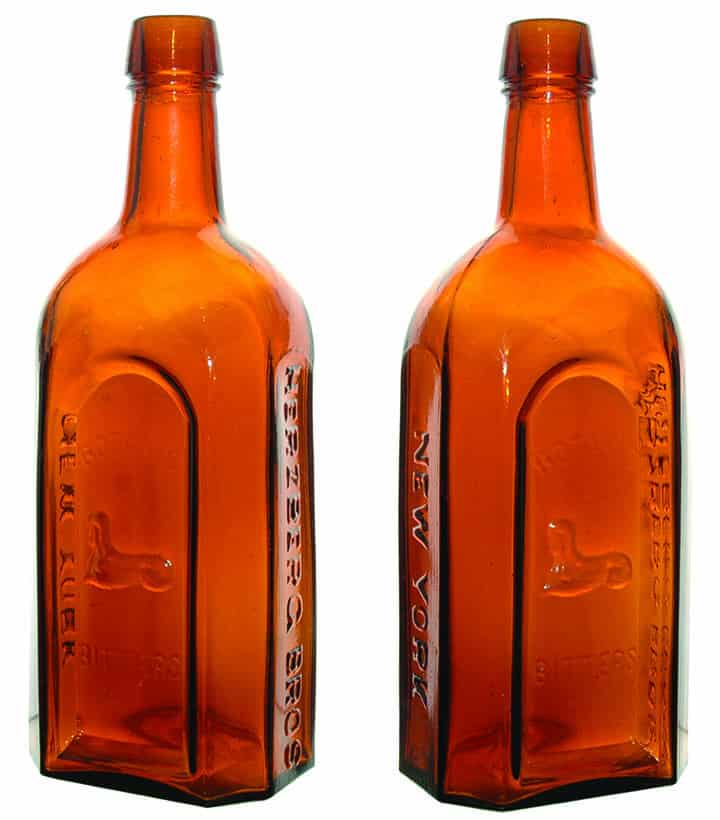 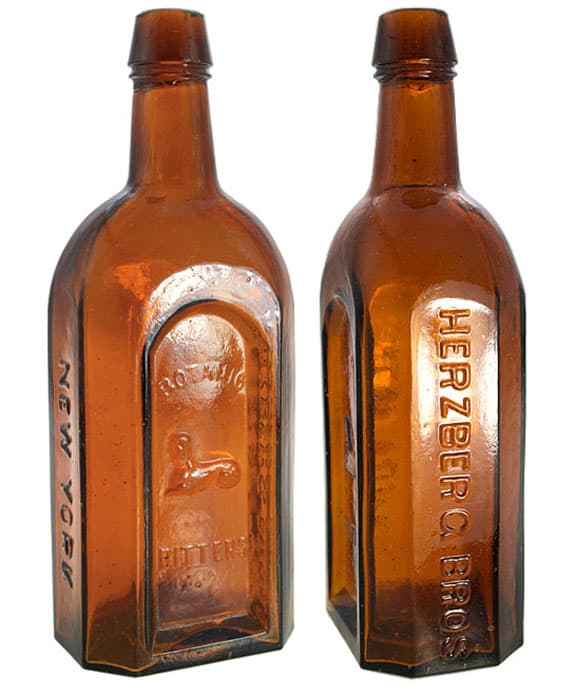 The Carlyn Ring and W.C. Ham listing in Bitters Bottles for the Herzberg’s Bitters is as follows: 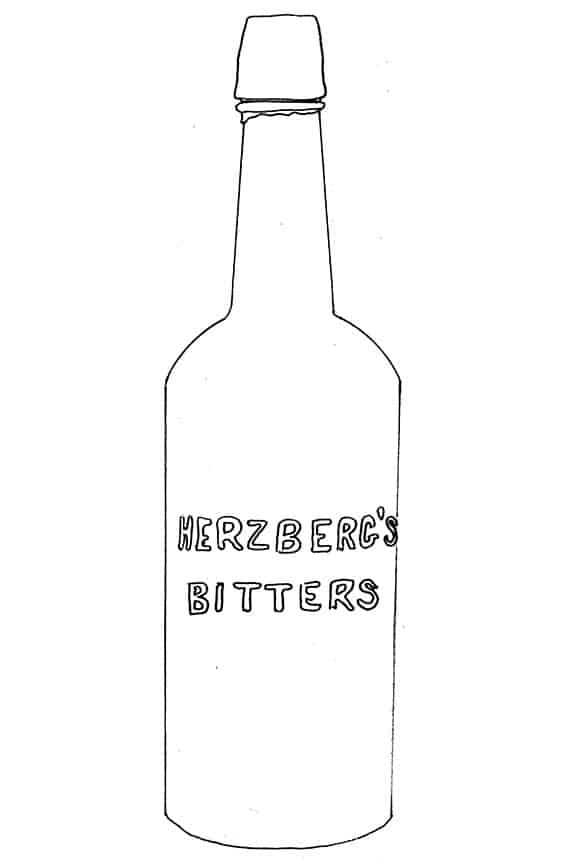 The Carlyn Ring and W.C. Ham listing in Bitters Bottles for the Botanic Bitters is as follows: 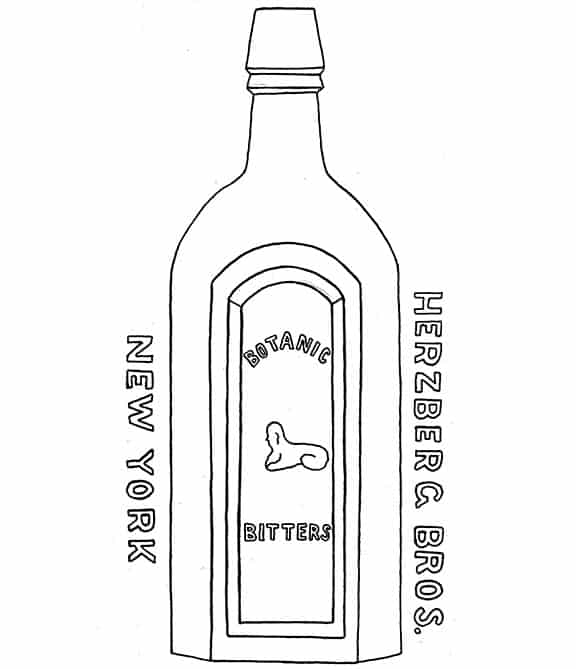 Trade Mark issued August 1875 to Moritz Hertzberg of New York City for Botanic Aromatic Bitters. As Herzberg name first appeared in the New York City directory in 1877 as producer of Botanic Sphinx Bitters, it is assumed that he produced a bitters with a paper label identity and then switched names adding a sphinx motif by 1877. 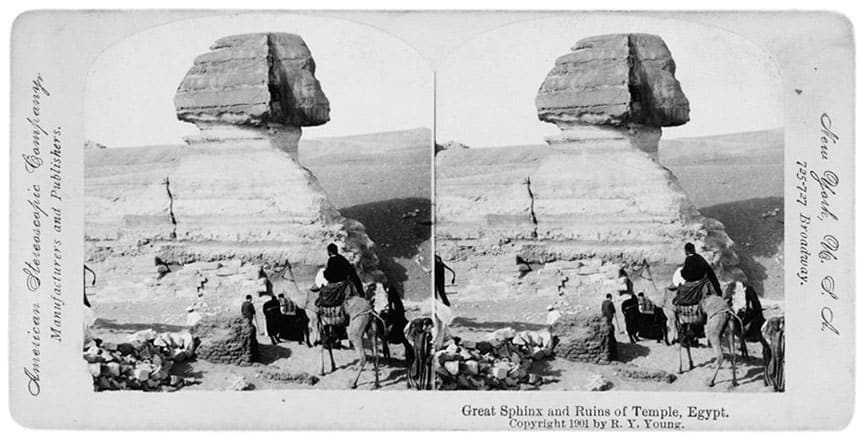 Their big seller was Botanic Bitters that had an odd “Sphinx” embossed on the face of the bottle. Moritz Herzberg received a patent in 1875 and they sold the product in New York and surrounding areas from then until 1877 or 1878. The Herzberg’s Bitters cylinder can not be directly tied to the family but I strongly suspect it was a predecessor to the embossed Botanic “Sphinx” Bitters bottle. Note that Harry found the bottle in southeast Pennsylvania which puts it in the area. I have asked for more pictures as I wonder if the bottle is pontiled. There is also a yellow example out there according to Ring & Ham. 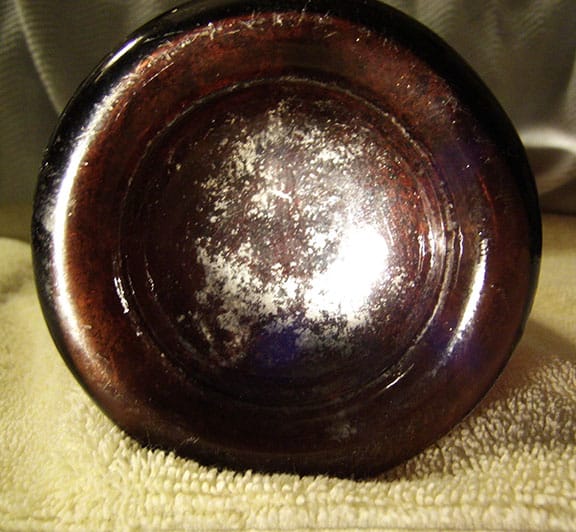 Base of Hertberg Bitters – It does not appear to be pontiled as far as I can tell. The grayish substance on the base in one photo seems to just be mineralization. – Harry

Ferdinand Meyer V is a native of Baltimore, Maryland and has a BFA in Fine Art and Graphic Design from the Kansas City Art Institute and School of Design. Ferdinand is the founding Principal of FMG Design, a nationally recognized design consultation firm. Ferdinand is a passionate collector of American historical glass specializing in bitters bottles, color runs and related classic figural bottles. He is married to Elizabeth Jane Meyer and lives in Houston, Texas with their daughter and three wonderful grandchildren. The Meyers are also very involved in Quarter Horses, antiques and early United States postage stamps. Ferdinand is the past 6-year President of the Federation of Historical Bottle Collectors and is one of the founding members of the FOHBC Virtual Museum.
View all posts by Ferdinand Meyer V →
This entry was posted in Advertising, Bitters, History, Liquor Merchant, Questions and tagged Aaron, Aromatic, bitters, Botanic, Brothers, cylinder, Emanuel, Heiman, Herzberg, Joseph, Leo, Moritz, New York, sphinx. Bookmark the permalink.