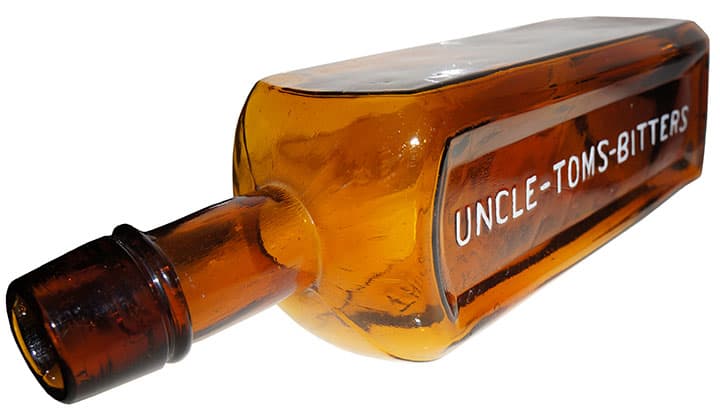 Uncle Tom has been popping up in bitters news lately with two examples of the bitters appearing in the current North American Glass auction. I was also able to pick up an example (pictured above) from the great John Feldmann collection a few years back. The example is ex: Carlyn Ring. When I asked bitters trade card and ephemera authority Joe Gourd if he had any material on Uncle Toms Bitters, he said no, but… he had just purchased a cool advertisement on eBay and had the item being mailed to him. He sent me the ebay link and I borrowed the images for this post. Make sure you check out “The Song the Boys Sing”. 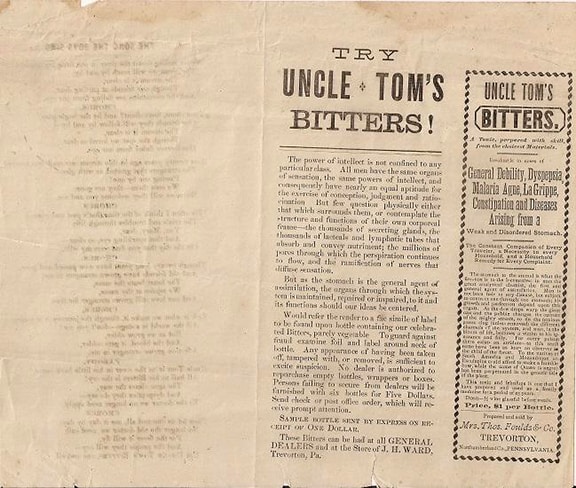 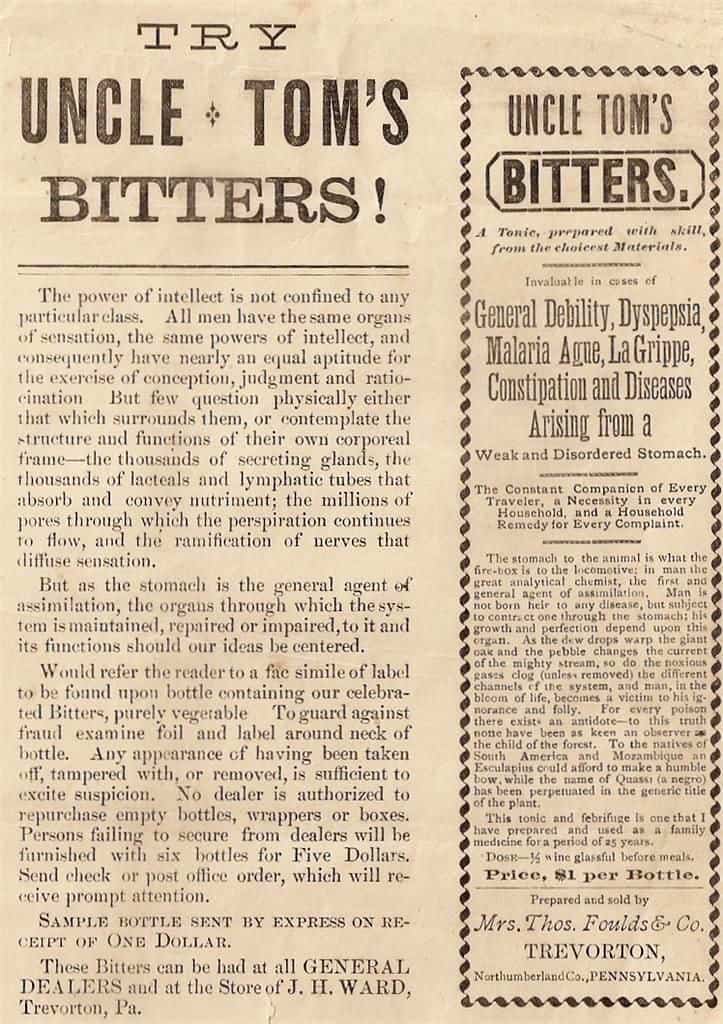 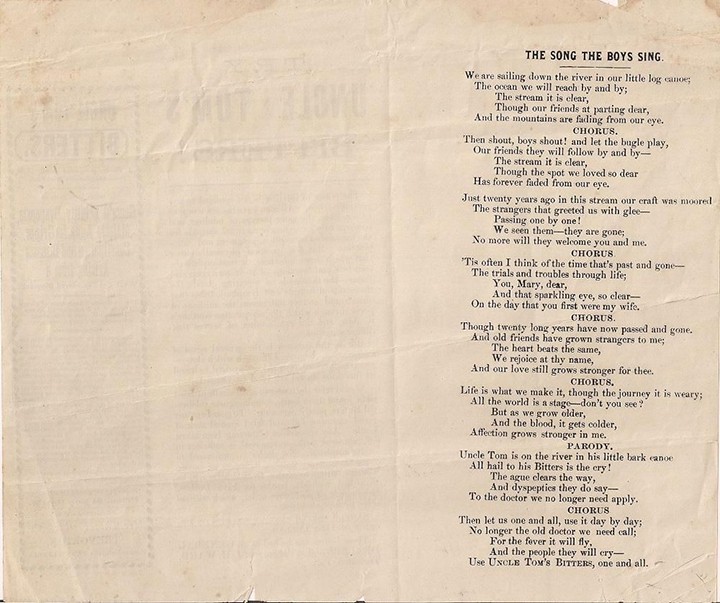 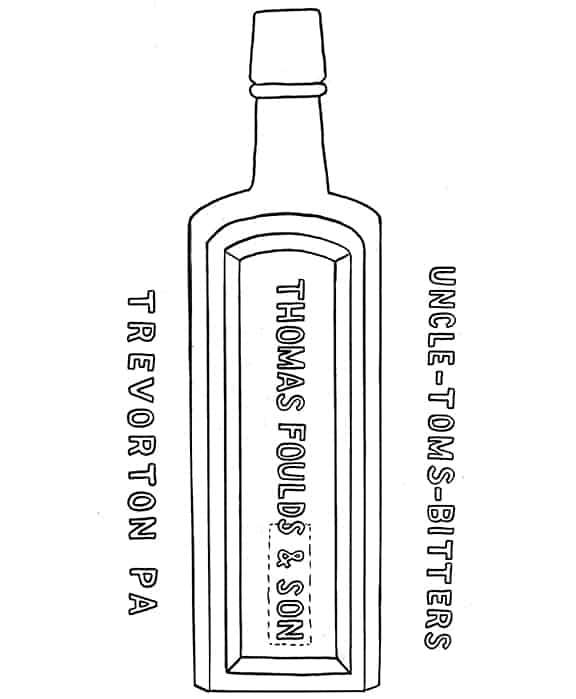 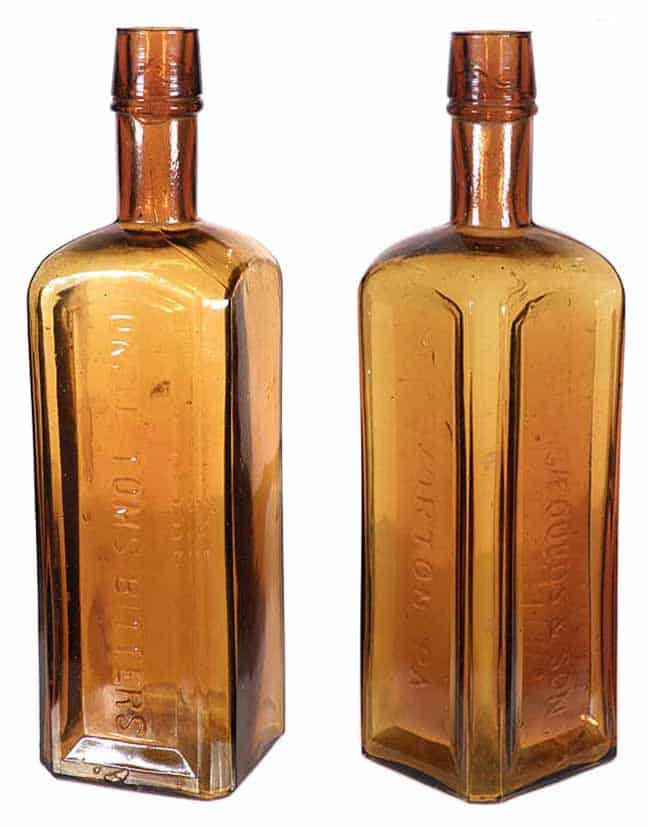 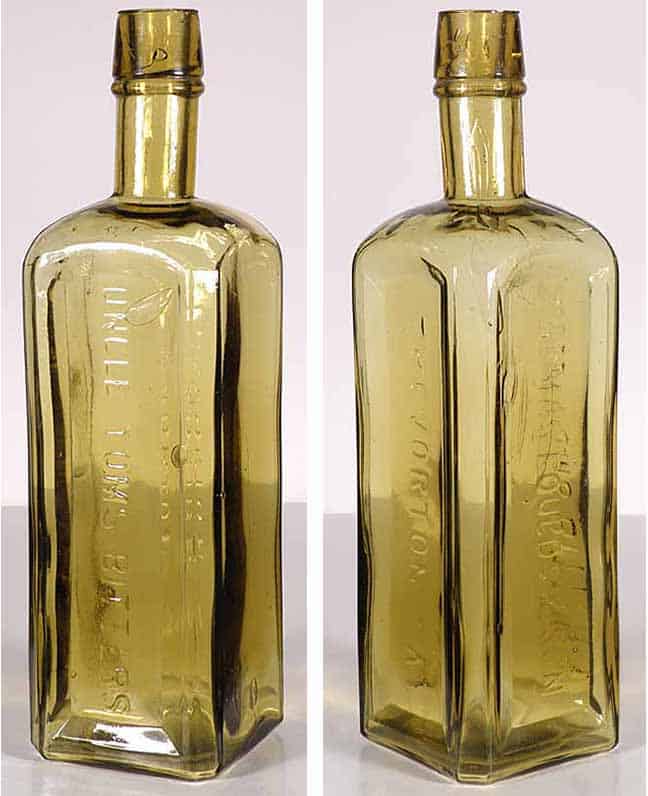 What is interesting about the ebay piece is that is says it is “Prepared and sold by Mrs. Thomas Foulds & Co., Trevorton, Northumberland County, Pennsylvania”. It looks like she may have taken over the brand at some point. I believe the three bottles in this post to be prior to the printed piece. 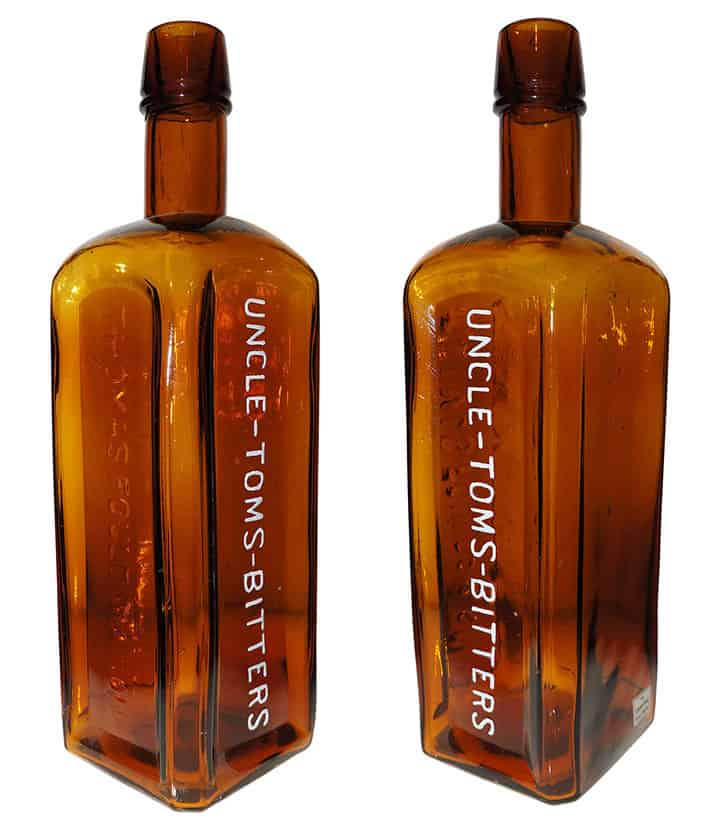 Thomas Foulds, proprietor of the Pennsylvania House, Trevorton, was the eldest son of Thomas and Dorothy Foulds. He was born at Tupton Moor, North Winfield parish, Derbyshire, England on September 16, 1830, and came to America with his parents in 1849. He followed mining in Schuylkill county, Pennsylvania, until 1851, when he located in Trevorton, and subsequently entered the employ of the late William H. Marshall, and in company with him went to Centralia, Pennsylvania, where he was engaged one year prospecting for coal. He returned to Trevorton, and opened all the principal gangways of the North Franklin colliery, except two on the west side of the Gap.

In 1856 he purchased his present place of business, and in 1857 assumed charge of the hotel. In the same year he went South with Mr. J. W. Beebe, of New York City, and took charge of the bituminous coal mines for a New York company near Montevallo, Alabama, and while there was successful in introducing coal on the steamboats on the Alabama river. Returning to Trevorton in 1858, in connection with his hotel he engaged in the mercantile business, which he conducted until 1867, and again embarked in the coal trade at Bear Valley, and was also connected with the Rock Ridge Coal Company of Huntingdon county, Pennsylvania.

His early advantages were limited, but he educated himself by a knowledge gained from books and close observation of things around him. In 1862 he invented an improvement in ordnance known as the needle gun, for which he refused ten thousand dollars. In 1872 be invented a pump, and also invented a condenser (or what is commonly known as an exhaust in receiving pipes of pumps), for which he was awarded the only medal for condensers at the Centennial Exposition in 1876. In 1885 he received letters patent for an improvement in injector condensers, and in July, 1890, he patented an exhaust steam receiver. A metallic railroad tie is his latest invention, for which letters patent have recently been received.

He is also well known as the proprietor and manufacturer of the tonic called “Uncle Tom’s Bitters,” for which he received a trade mark in 1886.

He was the originator of the sliding scale adopted by the Bear Valley Coal Company in the regulation of its payment of wages for mining coal, previous to the adoption of the same by the Philadelphia and Reading Coal and Iron Company.

Ferdinand Meyer V is a native of Baltimore, Maryland and has a BFA in Fine Art and Graphic Design from the Kansas City Art Institute and School of Design. Ferdinand is the founding Principal of FMG Design, a nationally recognized design consultation firm. Ferdinand is a passionate collector of American historical glass specializing in bitters bottles, color runs and related classic figural bottles. He is married to Elizabeth Jane Meyer and lives in Houston, Texas with their daughter and three wonderful grandchildren. The Meyers are also very involved in Quarter Horses, antiques and early United States postage stamps. Ferdinand is the past 6-year President of the Federation of Historical Bottle Collectors and is one of the founding members of the FOHBC Virtual Museum.
View all posts by Ferdinand Meyer V →
This entry was posted in Advertising, Auction News, Bitters, Collectors & Collections, History, Medicines & Cures and tagged bitters, Carlyn, coal, eBay, England, Feldmann, Ferdinand, Foulds, Gourd, Joe, John, Meyer, mining, Pennsylvania, ring, song, Thomas, Tom, Trevorton, Uncle. Bookmark the permalink.