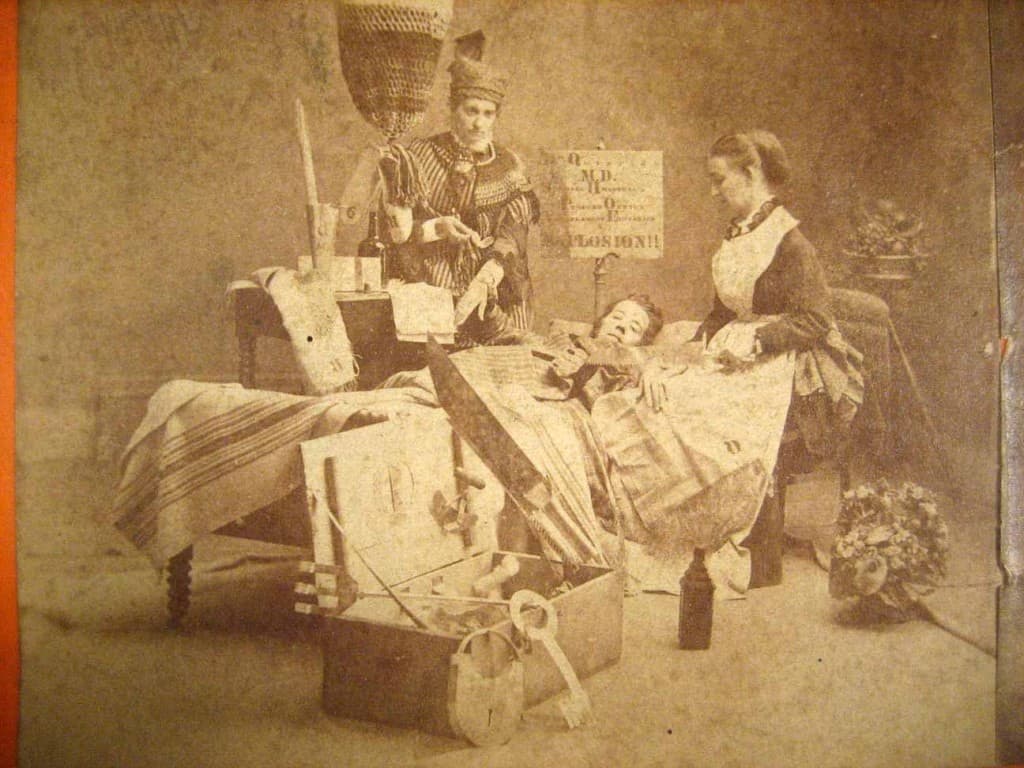 Frank Wicker over at BottlePickers.com tipped me off to this wonderful, yet bizarre stereoview card on eBay with a mock medical scene, a wizard of some sort, some poor sick lad and a Clara Barton wanna-bee. Take a moment and really look at all the props and symbology used in the image. This all takes place at “She Bang Hospital”. Curious about She Bang?

The earliest known citation of the word uses it as some form of hut or rustic dwelling. That’s in Walt Whitman’s Specimen Days, from Complete Poetry and Collected Prose, 1862:

“Besides the hospitals, I also go occasionally on long tours through the camps, talking with the men, &c. Sometimes at night among the groups around the fires, in their shebang enclosures of bushes.” More

“Here with 1874 ID on the back is this mock medical scene.  The wizard like doctor and nurse assistant are attending to the female patient. A Plantation Bitters bottle is seen in the foreground. The back side has an old inked transcription of the sign.” 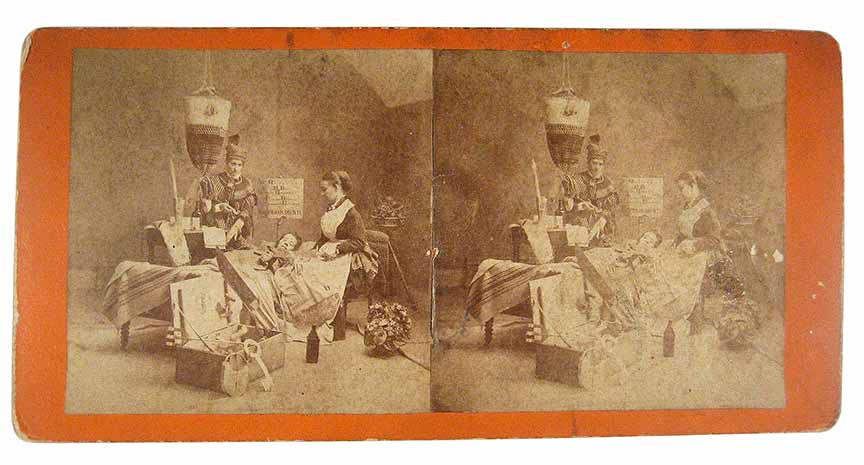 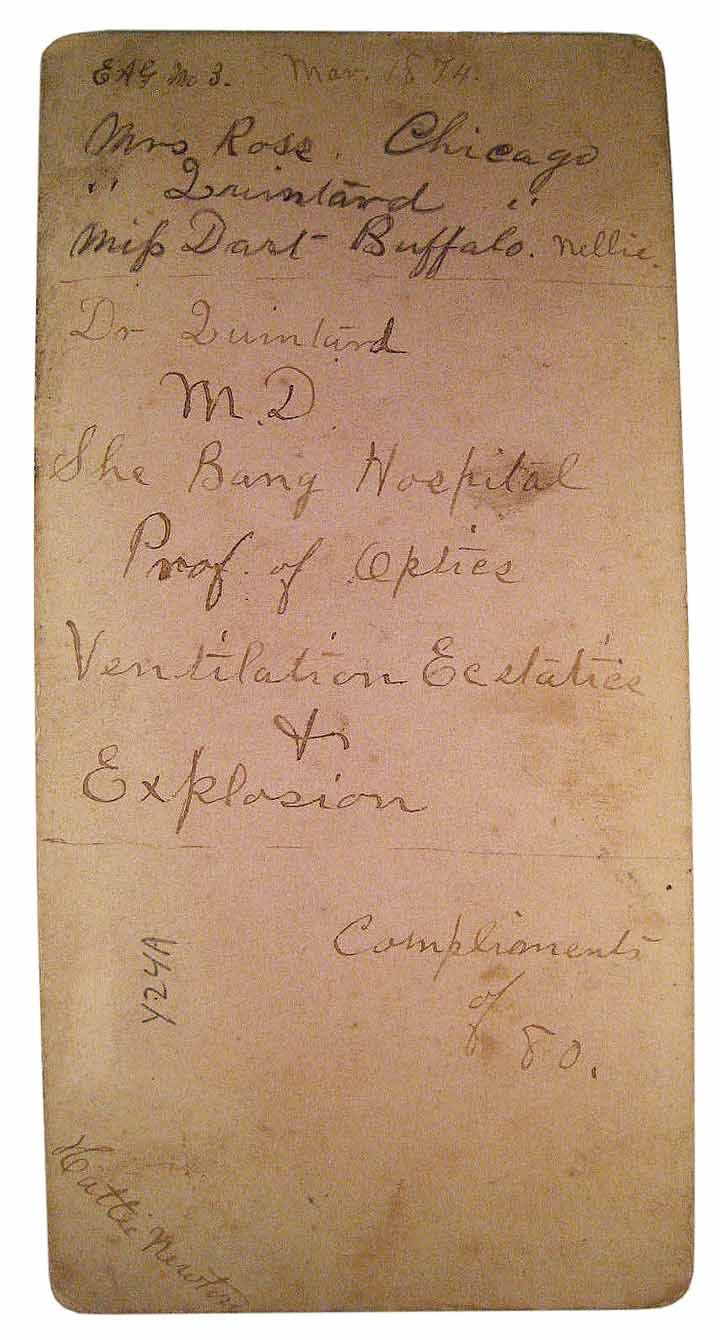 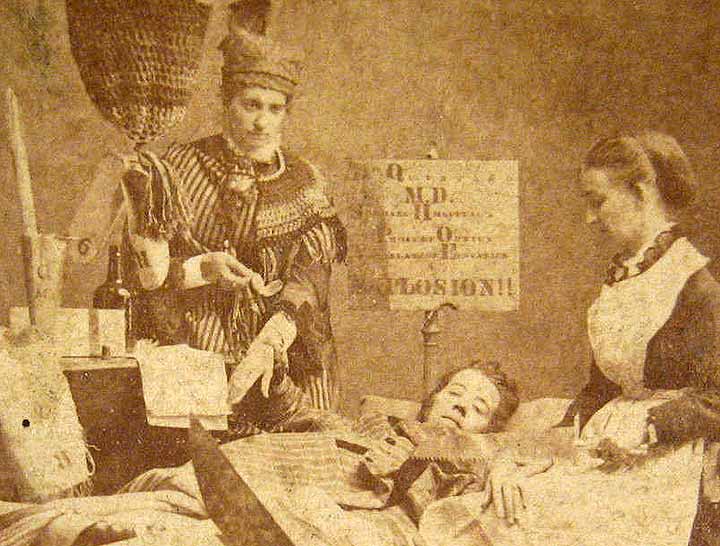 Wizard, sick lad and nurse detail. Tough to make out all words on sign. Looks like a man to me. 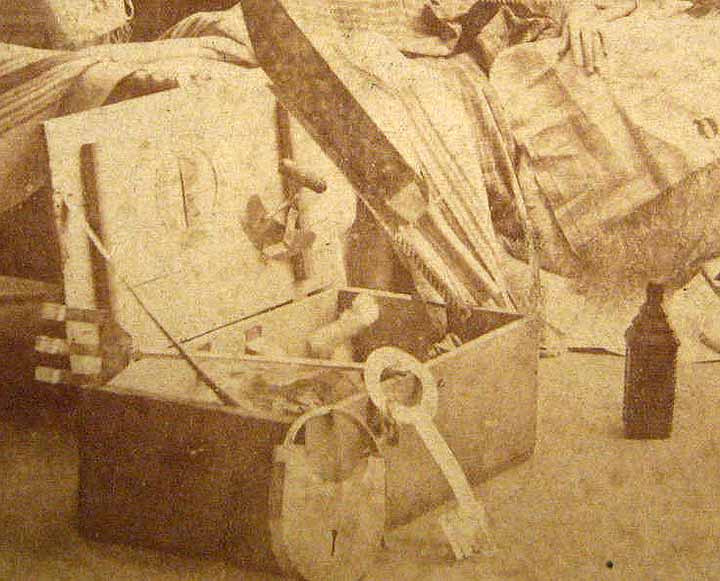 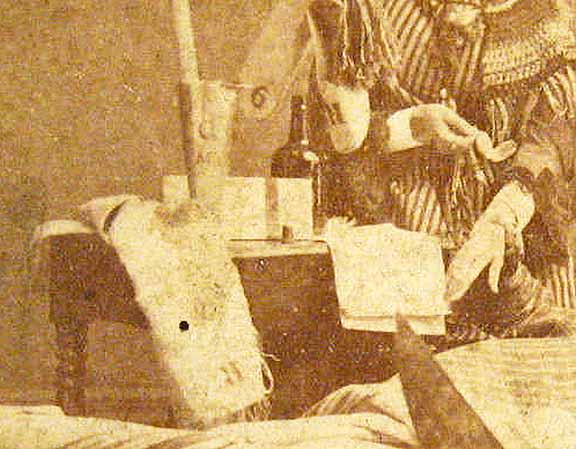 [Marianne Dow] The lock, key and trident are symbols related to Pluto, aka Hades, God of the Underworld, which I interpret as they’re saying having women nurses could lead to women doctors, and figurally speaking, all hell breaking out, hence the references to explosions and the She-Bang Hospital. There was a huge controversy around the professionalizing of nurses during the Civil War, and of course the eternal Women’s Rights controversy continues. The card mentions Dr. Quintard, who was a well known Civil War doctor who became a noted Episcopal Bishop in Tennessee. I think he likely favored nurses, as he certainly needed all the help he could get as a war time doctor.

Read: Unprecedented but Accomplished: The Professionalization of Female Nursing During the Civil War

Ferdinand Meyer V is a native of Baltimore, Maryland and has a BFA in Fine Art and Graphic Design from the Kansas City Art Institute and School of Design. Ferdinand is the founding Principal of FMG Design, a nationally recognized design consultation firm. Ferdinand is a passionate collector of American historical glass specializing in bitters bottles, color runs and related classic figural bottles. He is married to Elizabeth Jane Meyer and lives in Houston, Texas with their daughter and three wonderful grandchildren. The Meyers are also very involved in Quarter Horses, antiques and early United States postage stamps. Ferdinand is the past 6-year President of the Federation of Historical Bottle Collectors and is one of the founding members of the FOHBC Virtual Museum.
View all posts by Ferdinand Meyer V →
This entry was posted in Advertising, Bitters, Civil War, eBay, Ephemera, Figural Bottles, Humor - Lighter Side, Medicines & Cures and tagged bitters, Civil War, Dow, Drakes, eBay, Hospital, mock, Plantation, Pluto, Quintard, stereoview, wicker. Bookmark the permalink.