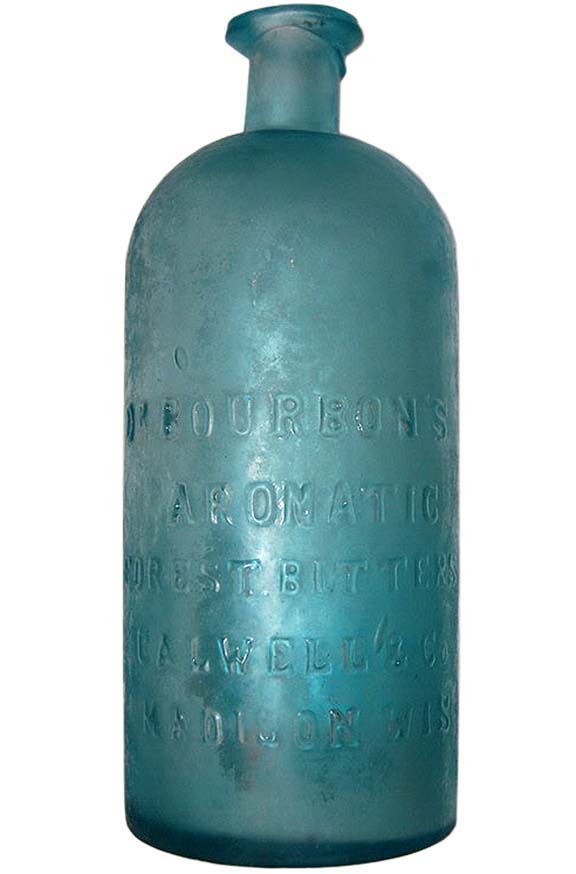 Interesting news from Steven Libbey, chief of the Wisconsin bottle club. Steve is reporting about an unlisted Dr. Bourbon’s Aromatic Forest Bitters from Madison, Wisconsin. What a great name! He states that there are actually two different sizes and adds that the two that he possesses are the only two whole examples in either size discovered so far.

Steven says “I was blown away one day meeting up with a picker who had my second example. It was pint sized. In the simplest measurement they are pint sized and quart sized. In greater detail the quart is eight and one half inches tall and three and seven sixteenths at the base. Both are deep aqua cylinders. The second or pint size is seven inches tall and two and seven eighths at the base. Both are iron pontiled and pictures of both are available on my website www.mrbottles.com. I have also filmed one for the Wisconsin Antique and Advertising Club in three dimension for our Spinners demonstration. PLEASE, take a look. It is worth it.” See Spinner.

Bill Ham is looking in to providing listings for both bottles which will be listed in the forthcoming Bitters Bottles Supplement 2. I will add to the post when provided.

The new listings by Bill Ham for the forthcoming Bitters Bottles Supplement 2:

A quick search online reveals a short-lived advertisement that appeared in sequential issues of the Richland County Observer from 07 October 1856 to 02 June 1857. Both the quart and pint sizes are listed. The product was sold by Colwell & Company in Madison, Wisconsin. Agents in Richland Center, Wisconsin were Matteson & Spooner. 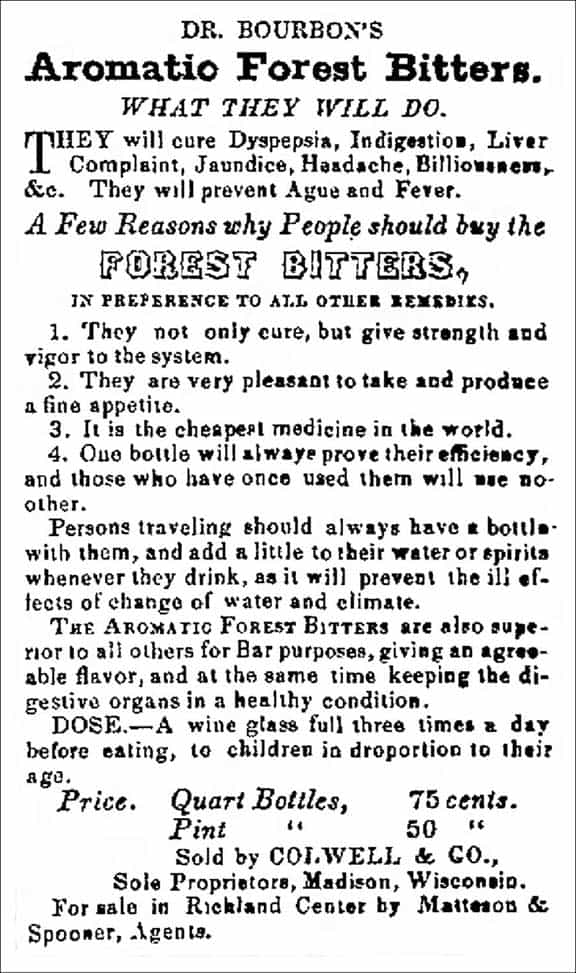 Ferdinand Meyer V is a native of Baltimore, Maryland and has a BFA in Fine Art and Graphic Design from the Kansas City Art Institute and School of Design. Ferdinand is the founding Principal of FMG Design, a nationally recognized design consultation firm. Ferdinand is a passionate collector of American historical glass specializing in bitters bottles, color runs and related classic figural bottles. He is married to Elizabeth Jane Meyer and lives in Houston, Texas with their daughter and three wonderful grandchildren. The Meyers are also very involved in Quarter Horses, antiques and early United States postage stamps. Ferdinand is the past 6-year President of the Federation of Historical Bottle Collectors and is one of the founding members of the FOHBC Virtual Museum.
View all posts by Ferdinand Meyer V →
This entry was posted in Advertising, Bitters, Club News, Collectors & Collections, Digging and Finding, History, Medicines & Cures and tagged Aromatic, bitters, Bourbon, Colwell, Forest, Libbey, Madison, Matteson, Richland, spinner, Spooner, Steven, Wisconsin. Bookmark the permalink.