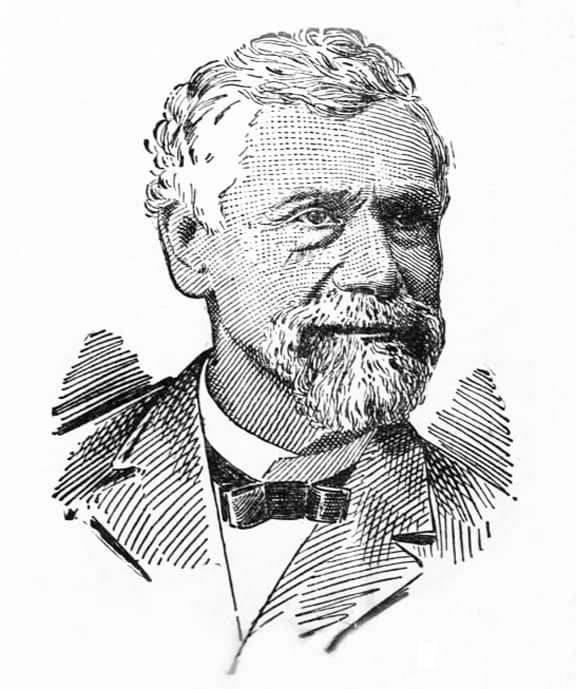 Joe Gourd sent in this outstanding Dr. Harter’s Wild Cherry Bitters advertising trade card (above) from the John Kemler collection. As the card says, the “Train Load of Health” is historically correct, and is the largest shipment of its character ever made in the United States. The special train was removing the main office and laboratory of the Dr. Harter Medicine Company from St. Louis, Missouri to Dayton, Ohio in August and September 1895. Look at the great illustration below showing a bottle of Dr. Harter’s on top of the roof. The top illustration is Dr. S. K. Harter. 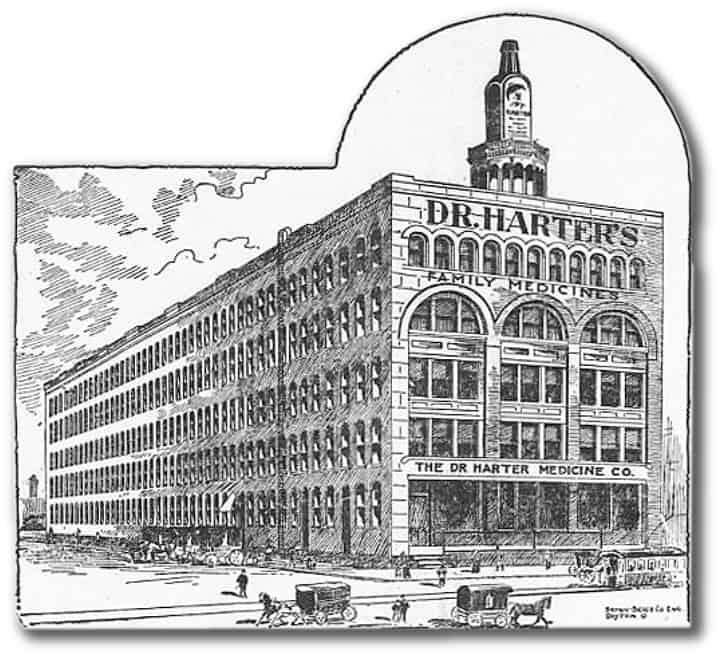 I’ve written about Dr. Harter’s before with Dr. Harter’s Wild Cherry Bitters and the Bottle Gods and even noted this train. To see an image on this trade card is quite amazing. Look at this full page article in The Coffeyville Weekly Journal on 06 September 1895. 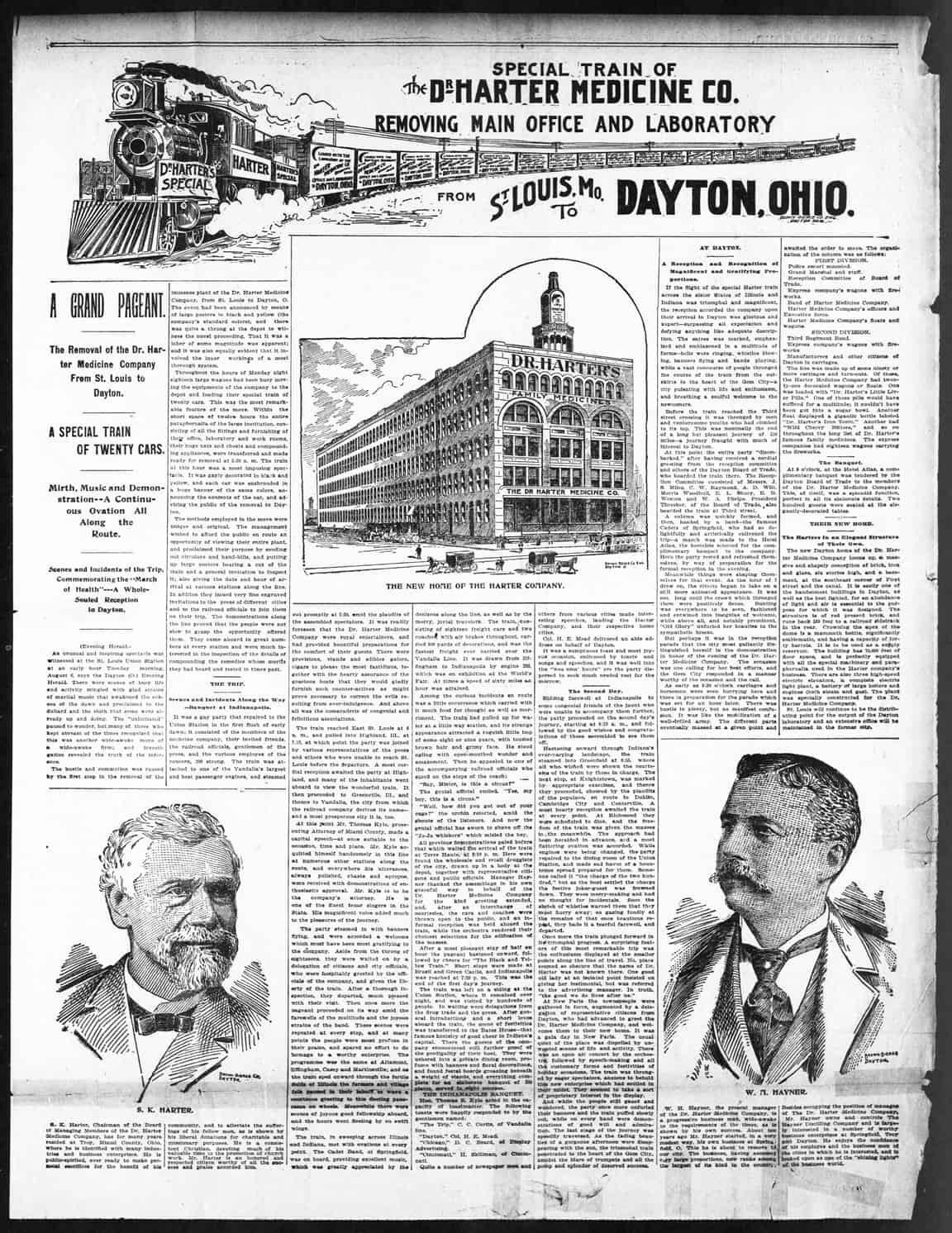 DR. HARTER’S IRON TONIC WAS AN ELIXIR OF LIFE FOR DAYTON

Aug. 5, 1895, a train carrying the first of the manufacturing equipment and the officers of the company left St. Louis for Dayton. Newspaper reporters from Dayton and every town on the route between St. Louis and Dayton went to St. Louis to accompany the train.

Local businesses declared a holiday, and when the train arrived at Union Station, the whistles of every Dayton manufacturing plant blew, and the huge bell at the Central Fire Station rang. At the signal, thousands of Daytonians hurried downtown, some to inspect the 18-car train, and others to crowd along the curbs to watch the parade. At 7:40 p.m. Col. Torrence Huffman, grand marshall, gave the signal and led by the Springfield Cadet Band and a platoon of mounted police, the parade began. All the houses along the route were decorated and lighted with Japanese lanterns. Dayton businesses were represented by company express wagons. The Harter company express wagons followed, and at the last of the parade were 200 carriages filled with Dayton citizens. All occupants of the wagons and carriages had been given red flares and Roman candles to shoot, and the entire parade was a ribbon of colorful explosions as it countermarched along Main Street to the Atlas Hotel.

This article appeared in the Dayton Daily News 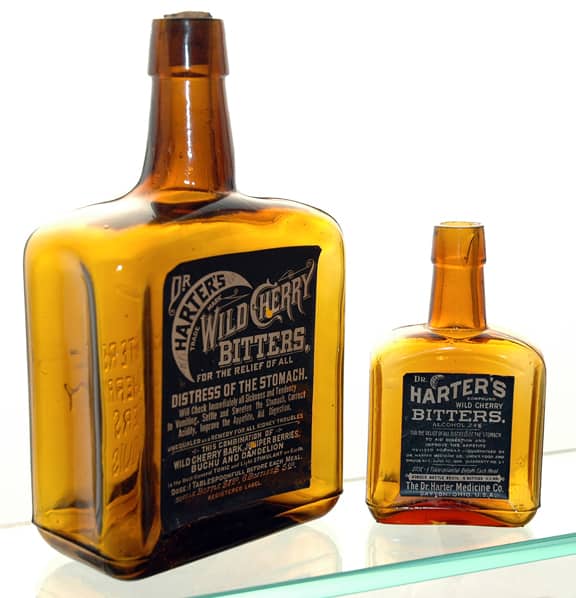 Ferdinand Meyer V is a native of Baltimore, Maryland and has a BFA in Fine Art and Graphic Design from the Kansas City Art Institute and School of Design. Ferdinand is the founding Principal of FMG Design, a nationally recognized design consultation firm. Ferdinand is a passionate collector of American historical glass specializing in bitters bottles, color runs and related classic figural bottles. He is married to Elizabeth Jane Meyer and lives in Houston, Texas with their daughter and three wonderful grandchildren. The Meyers are also very involved in Quarter Horses, antiques and early United States postage stamps. Ferdinand is the past 6-year President of the Federation of Historical Bottle Collectors and is one of the founding members of the FOHBC Virtual Museum.
View all posts by Ferdinand Meyer V →
This entry was posted in Advertising, Article Publications, Ephemera, History, Medicines & Cures, Miniatures, Tonics, Trade Cards and tagged Coffeyville, company, dayton, Elixir, family, Gourd, health, Kemler, life, load, Medicine, Meyer, Missouri, ohio, St. Louis, Tonic, train. Bookmark the permalink.