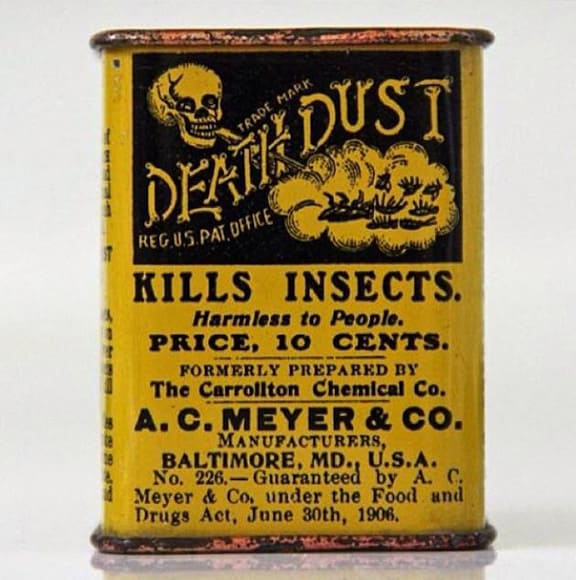 I have wondered before, with the last name Meyer, and being from Baltimore, if I was related in any way to A. C. Meyer who was a druggist in Baltimore. I have seen bottles, fielded questions and generally just scratched my head when the topic came up. I have done some pretty deep ancestry research with my family and I have not found the connection but I am reasonable sure it is there. That is another story. The other day I started thinking about A. C. Meyer again when Collectors Weekly posted the above image of A. C. Meyer’s Death Dust. “Harmless to People”. Uh roger that, Adolph. 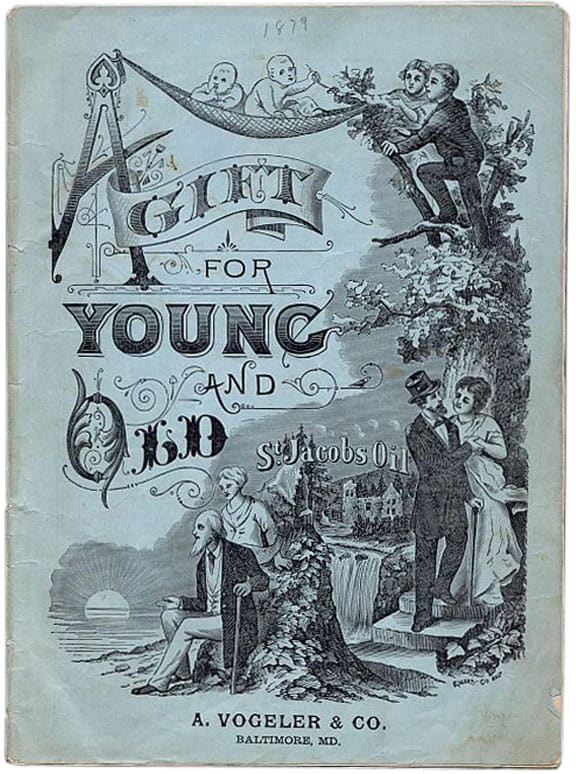 The drug story with A. C. Meyer starts with August Vogeler who was born in Minden, Germany in 1819, and emigrated to the United States to Baltimore when 20 years old and entered the employ of the wholesale drug firm Smith & Atkinson. Five years later he established the firm of A. Vogeler & Company manufacturing drugs and chemicals and eventually built up a drug business and manufactured products such as St. Jacob’s Oil (see above and below) and Dr. August Koenig’s Hamburg Drops, Koenig’s Hamburg Breast Tea, Diamond Vera-Cura and Dr. Bull’s Family Medicines which will be addressed further below. 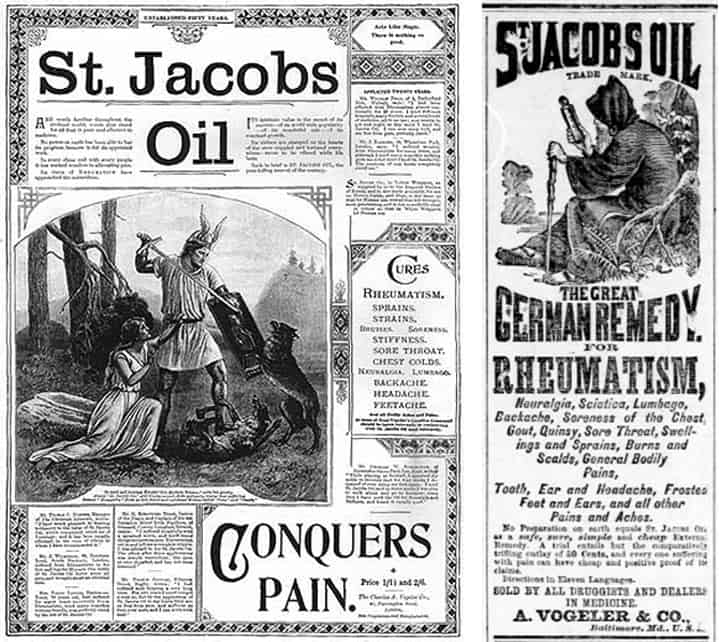 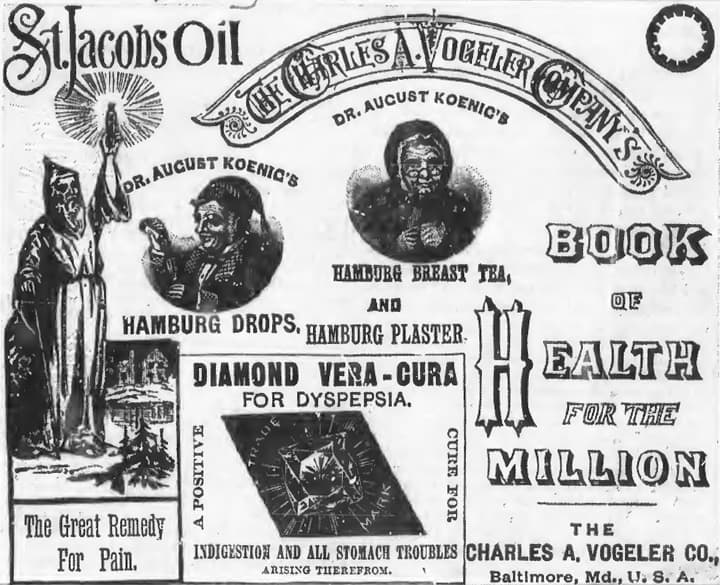 Vogeler & Company was located for a long period of time at Liberty and German Streets in Baltimore City. Charles A. Vogeler, August’s son, grew the business and was one of the pioneers of progressive patent medicine advertising and employed many novel schemes. Another son, Jerome Vogeler was also engaged in the drug business. 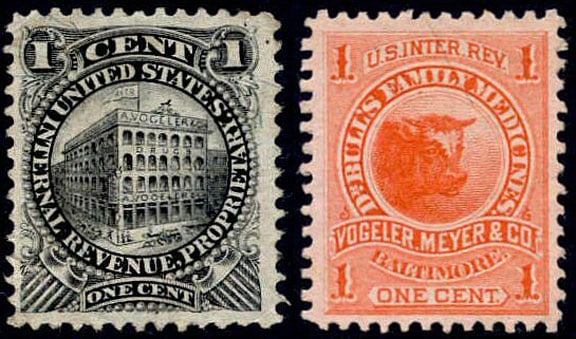 The one-cent black stamp (left) for A. Vogeler & Company was issued from June of 1874 until May 3, 1883. The Vogeler, Meyer private proprietary was issued from 1877 until April 6, 1883. A bull’s head was chosen to be on the stamp representing Dr. Bull’s Family Medicines. – rdhinstl.com

Adolph Carl Meyer, our “A. C.” was born in Bremen, Germany (where my family came from) on 31 May 1852 and emigrated to the United States in 1869. On 16 May 1877, Adolph married Florence Emily Jacobina Stellman. There was eventually an Adolph Jr. who worked with his father as he shows up in 1900 and later directory listings. In his early business years in Baltimore, Meyer was listed as a clerk, presumable at a drug store and probably Vogelers. During this time, he became a friend and business associate of Charles Vogeler, August’s Vogeler’s son. From 1878 to 1883, Vogeler and Meyer had various business relationships and were primarily wholesale druggists and importers and manufacturers of druggists and grocers specialities. The directory listing below certainly represents the various relationships. 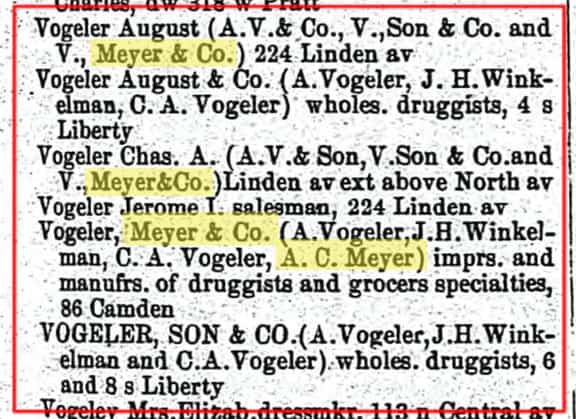 Previously, in 1873, August Vogeler acquired the medicinal compounds of Reverend Dr. Bull (not the Dr. Bull in Louisville). Eventually in 1877, with the help of his partner, Adolph, the company promoted and sold Dr. Bull’s Family Medicines until shortly after the death of Charles Vogeler in 1882. 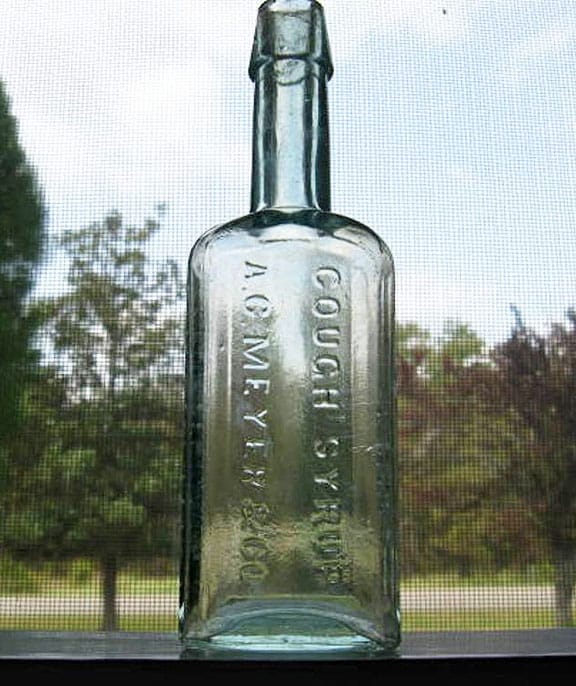 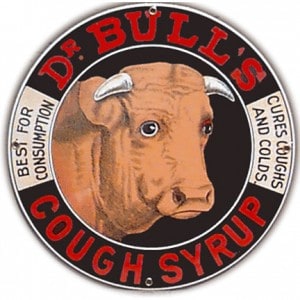 The Dr. Bull acquisition included a cough syrup, Compound Pectoral, Pain Drops, and a blood mixture. While newspaper advertisements claimed that Dr. Bull’s was gentle and affective for children, The Great American Fraud: Articles on the nostrum evil and Quackery reprinted from Collier’s (October 1905) asserted that Dr. Bull’s original formula contained morphine (later replaced by codeine) resulting in several deaths. In follow-up advertisements around 1900, the safety of Dr. Bull’s was continually emphasized in illustrations of children receiving the medicine. A picture of a young mother giving her little girl Dr. Bull’s reads “A child’s stomach and brain are not to be trifled with. Some medicines cure coughs but injure otherwise-perhaps permanently. Dr. Bull’s is harmless, sure and quick.” Another advertisement shows a proud grandfather with his brood of vigorous grandchildren, “It may save your life some day – it has saved lots of others. . . it can’t hurt even the smallest or sickest child—and it cures.” 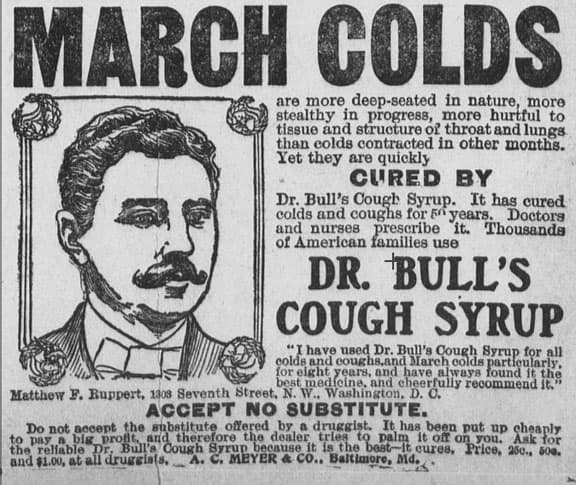 In 1883, A. C. Meyer purchased all interests of the partners and remained in business until his death 0n 4 February 1914. 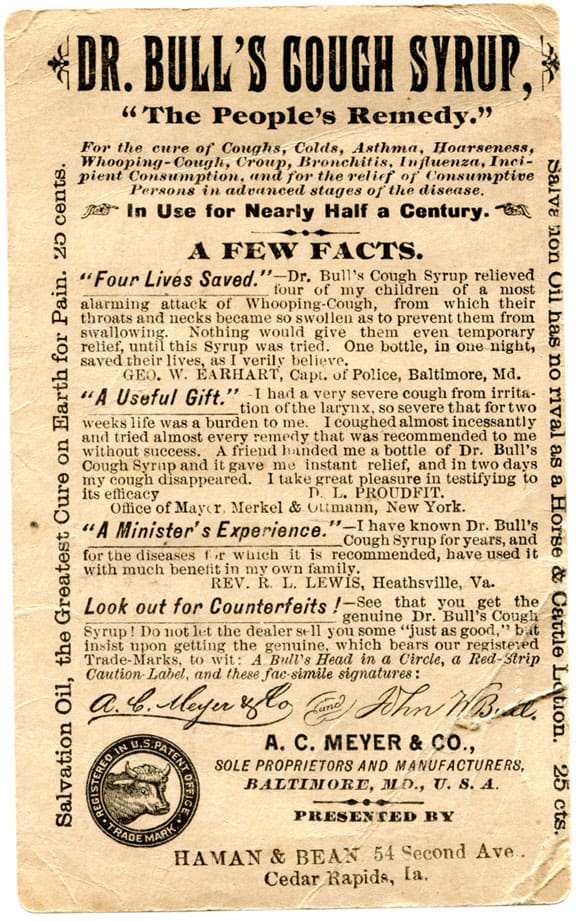 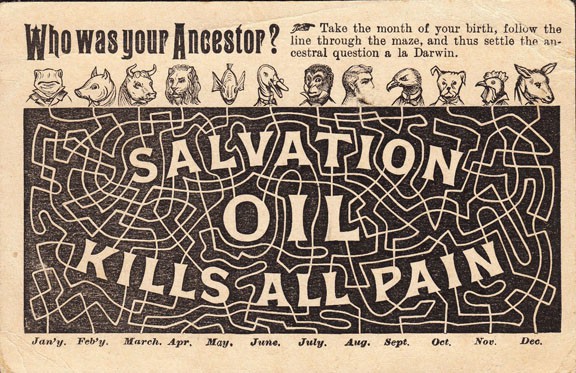 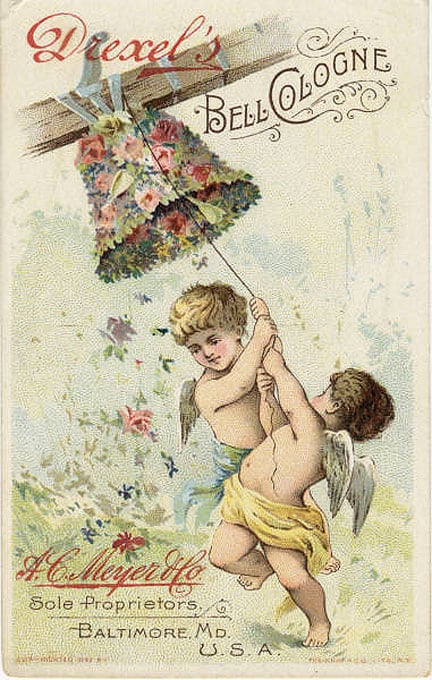 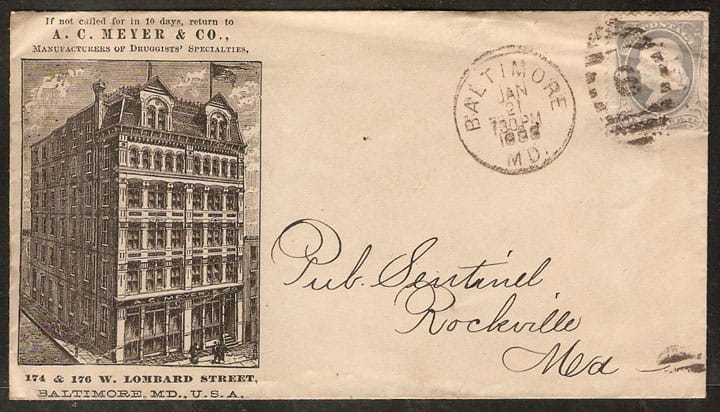 1878 -1883: Various relationships with August Vogeler, wholesale druggist. A. C. Meyer, importer and manufacturer of druggists and grocers specialities (see above) 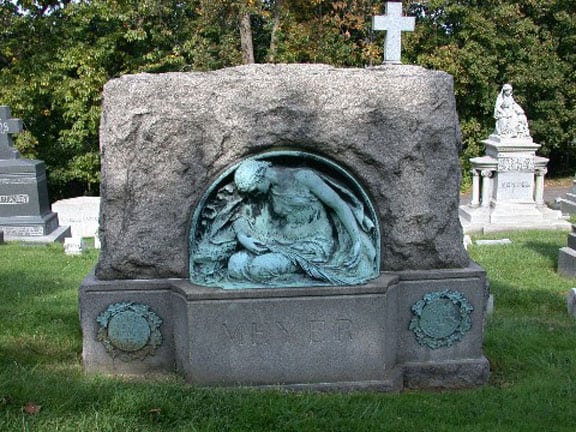