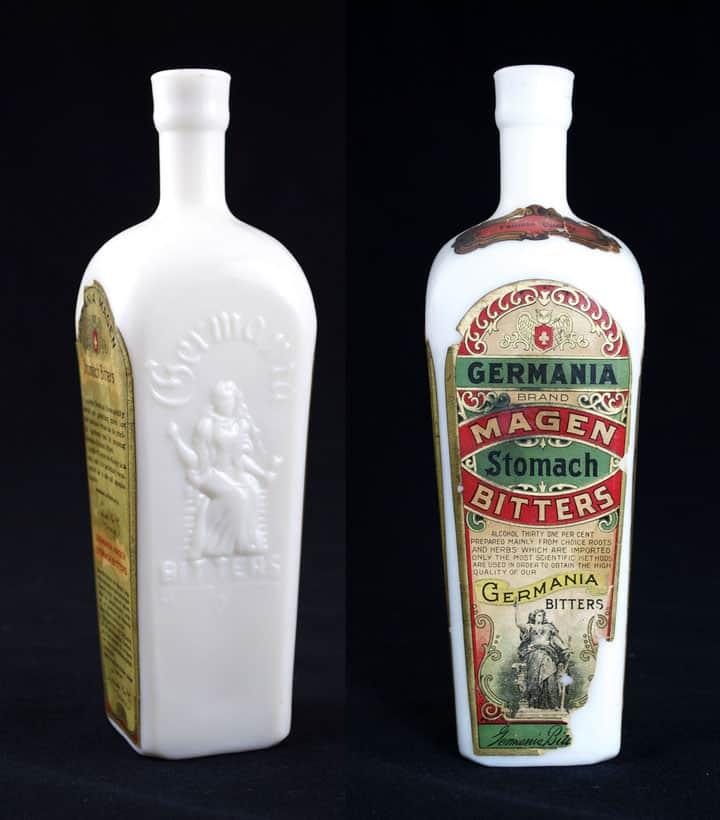 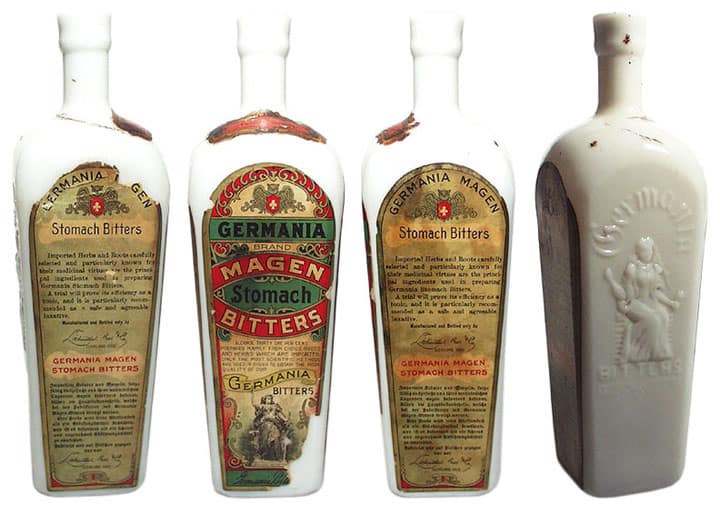 Don’t want take away anything from a post devoted to his collection, but if you think it works in, I do have a really great TC (trade card) for Germania Bitters. Apart from advertising the bitters, it also has a tie in to the 1893 World’s Fair: Columbian Exposition here in Chicago.

Have a great day…… Joe (Gourd) 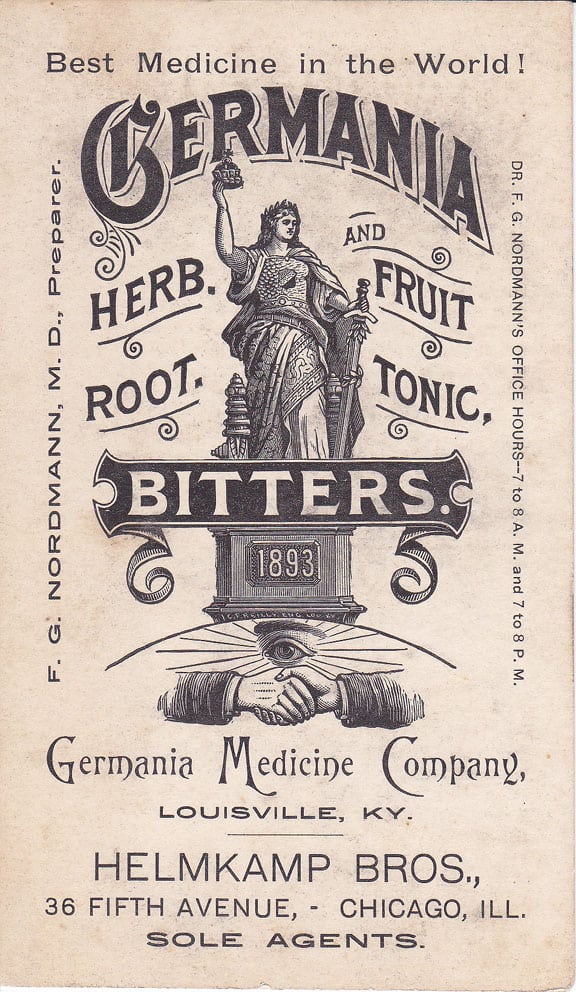 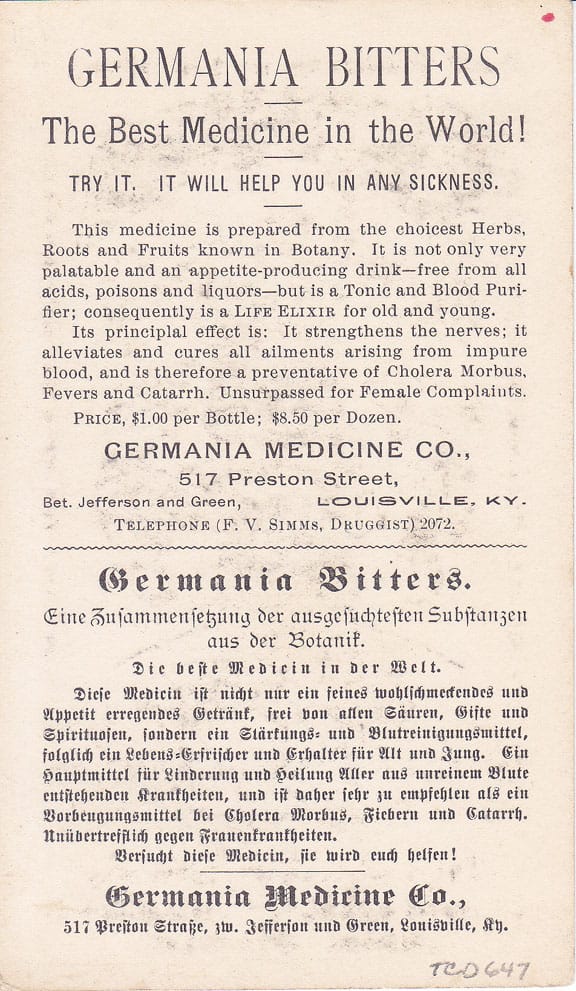 Joe: As usual, a really great bitters trade card that I was unaware of. Your card might be the G 35 L … Germania Herb Root & Fruit Tonic Bitters that Ring & Ham note in Bitters Bottles as possibly being the label for their G 33 and G 34 listings. I doubt this and suspect it is a later and separate brand even though there are similar graphics, verbiage and Chicago links. A real puzzler!

In her right hand she is proudly holding the recovered crown of the emperor, with her left she leans self-confidentially on the sword of the empire. 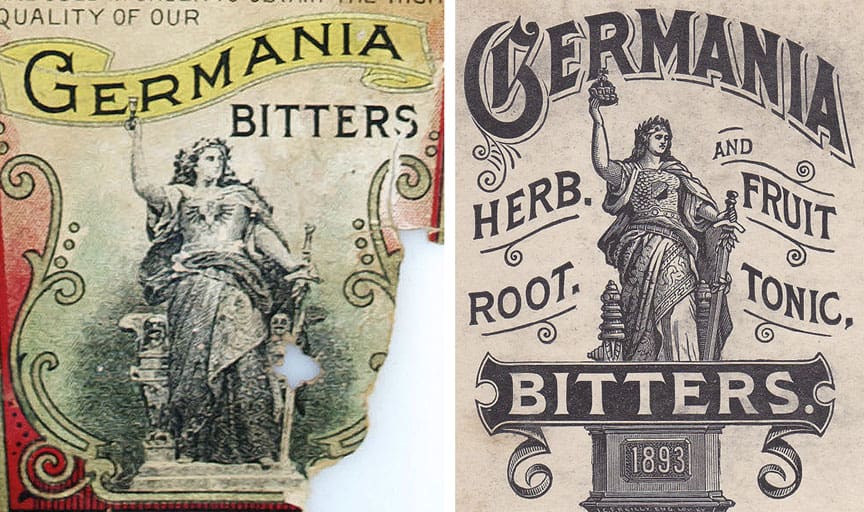 Who are you? Katzen G 33 label (left) and G 35 Gourd trade card graphics (right). At first glance the same image but there are lots of differences if you look closer!

I would also like to confirm who the seated figure is on the milk glass bottle (pictured below) and the “warrior goddess” represented on your trade card and Gary’s label. Could it be a very feminine Christopher Columbus? Is it Queen Isabella?

I believe this Bitters was exhibited at the Chicago Columbian Exposition of 1893. My own interpretation of the female warrior is that she could be the German mythological character “Brynhildr”, the heroine in the Volsunga saga” and “Eddic poems”. Other symbolism includes a “Handshake” and the “Seeing Eye” indicating the friendship between the U.S. and Germany. – Joe Gourd 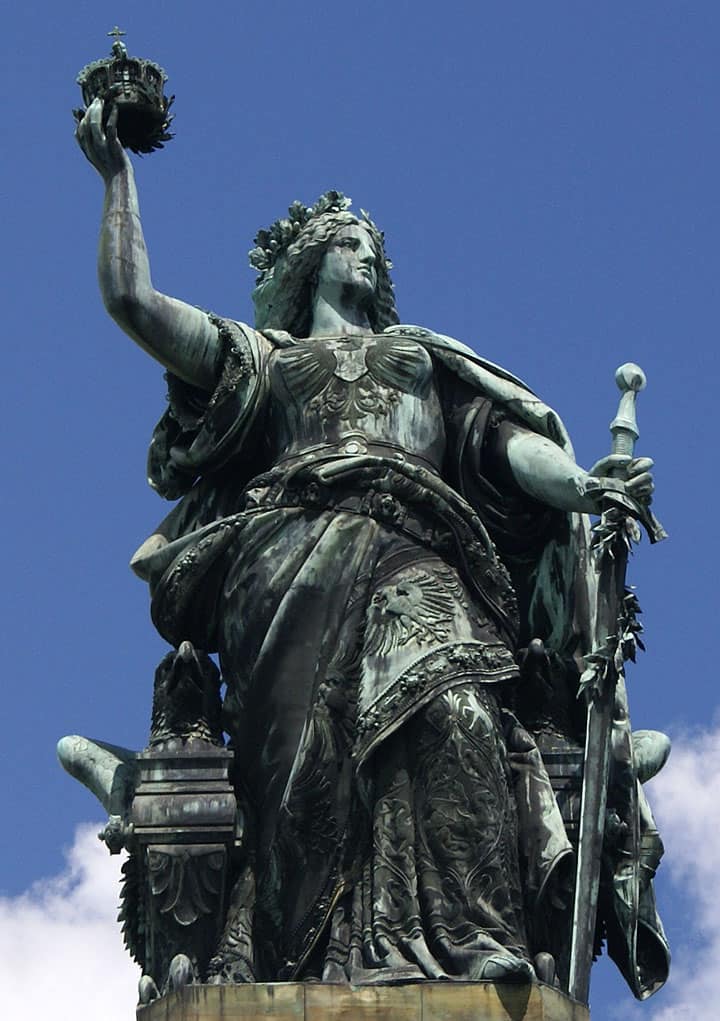 Searching “Germania”online, I find the subject image represented in the monument is called the Niederwalddenkmal or Germania, built in 1871. It is located above the city of Rüdesheim in the federal state of Hessen and can be regarded as the landmark of the region.

Each year thousands of tourists as well as locals pilgrimage to the Germania in order to commemorate the victims of the Thirty Year War. The Niederwalddenkmal was constructed shortly after the end of the German-French War in order to remember the foundation of the new German Reich. It was developed by the sculptor Johannes Schilling and the architect Karl Weisbach.

The foundation stone was laid on September 16th, 1871, by Wilhelm Friedrich Ludwig (Kaiser Wilhelm der Groﬂe / Emperor William the Great). After six years of construction and costs of more than one million gold marks, the Niederwalddenkmal was finally inaugurated on September 28th, 1883. The monument measuring 38 meters is regarded as a symbol of the union of all German tribes.

The central figure Germania is the 10.5 meters high and weighs 32 tons. In her right hand she is proudly holding the recovered crown of the emperor, with her left she leans self-confidentially on the sword of the empire. Data and emblems on the pedestal she is standing on tell from the time of the foundation of the empire. The largest relief shows emperor William I on his horse amidst of sovereigns, army commanders and soldiers of all corps.

The seated lady (pictured below) embossed on the bottle reminds me of some of the images from the 1893 US postage stamp series for the Columbian Exposition. Look carefully at the flanking figures on the $5 Christopher Columbus stamp below. Very strange, and this is a GERMAN brand! 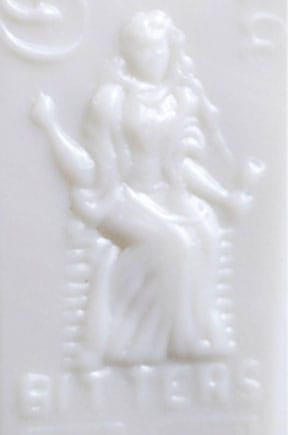 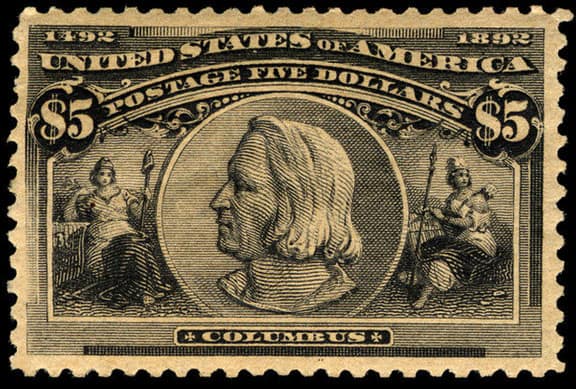 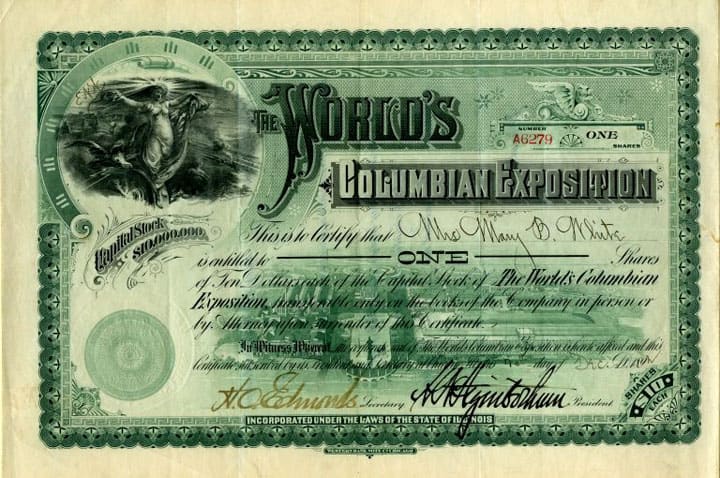 Engraved Certificate from the World’s Columbian Exposition issued in 1892. Notice vignette of a majestic allegorical woman flying over a city with buildings and trains in the background. There is also a beautiful underprint of the Exposition. This item is hand signed by the president, H. N. Higinbotham. – scripophily.net

Statue of the Republic or “Golden Lady”

I believe the goddess or warrior is not the bronze Statue of the Republic sculpture in Jackson Park, Chicago which was erected in 1918 to commemorate the 25th anniversary of the 1893 World’s Columbian Exposition and the Illinois statehood centennial. According to Wikipedia, The Statue of the Republic was funded by the Benjamin Ferguson Fund which commissioned Daniel Chester French, the sculptor of the original 65-foot-tall statue that stood on the grounds of the World’s Columbian Exposition of 1893, to sculpt this smaller replica. Henry Bacon, architect of the Lincoln Memorial, designed the pedestal for the 1918 Republic. 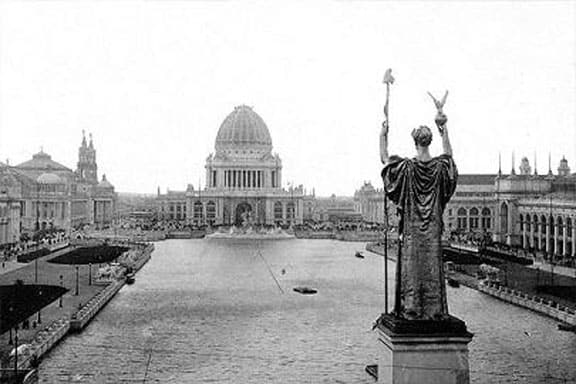 Statue of the Republic sculpture overlooking the Court of Honor and Grand Basin of the 1893 World’s Columbian Exposition (Chicago, Illinois).

The original statue stood in front of the Court of Honor at the World’s Columbian Exposition. However, in 1896, the original 65-foot statue succumbed to a fire, destroying it. The current statue stands on the site of the Exposition’s famous Electricity Building.
The statue is widely known in Chicago by the colloquial name of the “Golden Lady.” It was designated a Chicago Landmark on June 4, 2003.

One of these days I hope to untangle all of the German and Polish case gin bitters bottle brands such as Hartwig Kantorowicz, Josef Lowenthal, Luhenthal Brothers, Rudolph Bader, S. B. Rothenberg, Louis Roth, Fritz Rueter Bitters, Litthauer Stomach Bitters and Lohengrin Bitters to name a few. 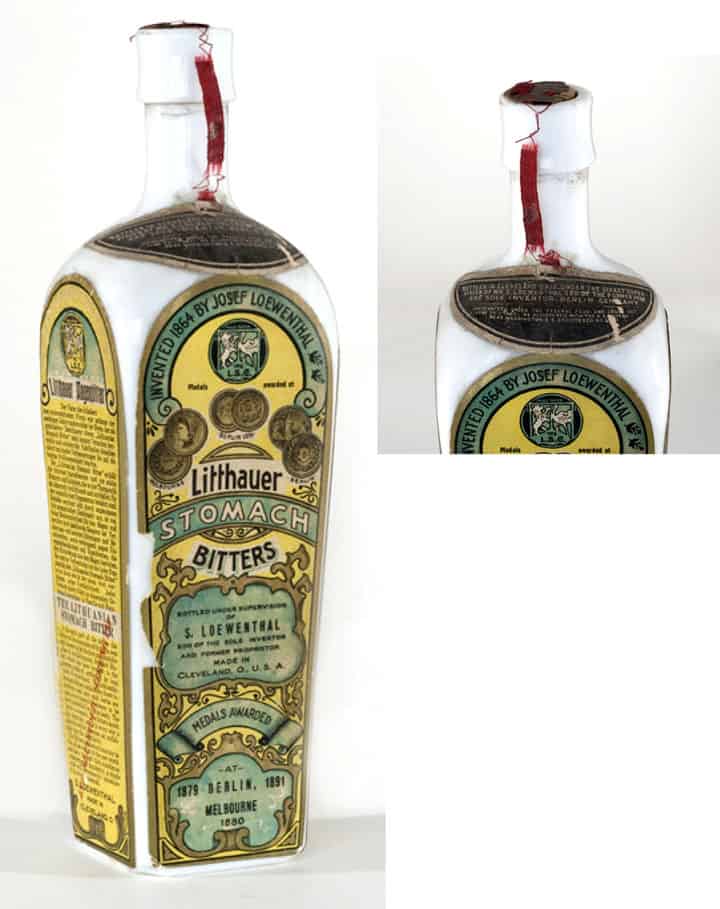 I had a tough time searching for information on the trade card but note the following, mostly taken from the card text:

“I’m looking for any information regarding grandfather; ADOLPH F. HELMKAMP. Born in Chicago Illinois, 1889. Mothers maiden name was either BECKMEYE or BECKEMEYER. I believe he had several brothers and a sister. I think the brothers name was GEORGE HENRY HELMKAMP, born 1894 in Missouri.”

The proprietor for Gary’s, Germania Magen Stomach Bitters was Luhenthal Bros. & Co. from Cleveland, Ohio. This would make it similar to a G 33 Germania Bitters without the WM. C. OESTING embossed on the bottle along with the motif of the seated lady. This will require a new listing by Bill Ham. 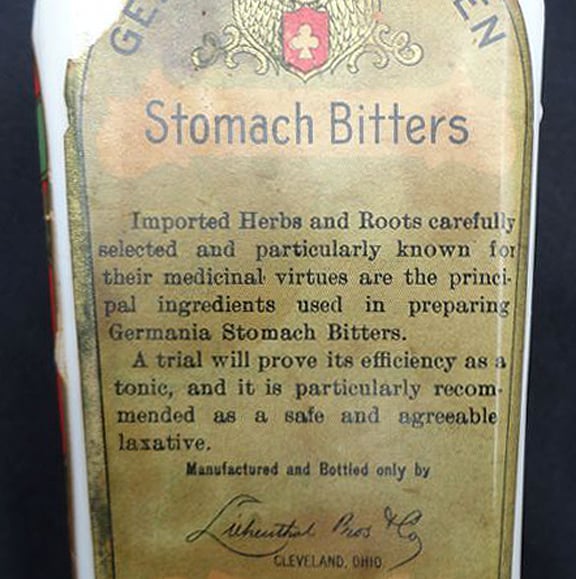 [Wikipedia] The World’s Columbian Exposition (the official shortened name for the World’s Fair: Columbian Exposition, also known as The Chicago World’s Fair) was a World’s Fair held in Chicago in 1893 to celebrate the 400th anniversary of Christopher Columbus’ arrival in the New World in 1492. The iconic centerpiece of the Fair, the large water pool, represented the long voyage Columbus took to the New World. Chicago bested New York City; Washington, D.C.; and St. Louis for the honor of hosting the fair. The fair was an influential social and cultural event. The fair had a profound effect on architecture, sanitation, the arts, Chicago’s self-image, and American industrial optimism. The Chicago Columbian Exposition was, in large part, designed by Daniel Burnham and Frederick Law Olmsted. It was the prototype of what Burnham and his colleagues thought a city should be. It was designed to follow Beaux Arts principles of design, namely French neoclassical architecture principles based on symmetry, balance, and splendor.

Read More: History of Kantorowicz Family and their Factory