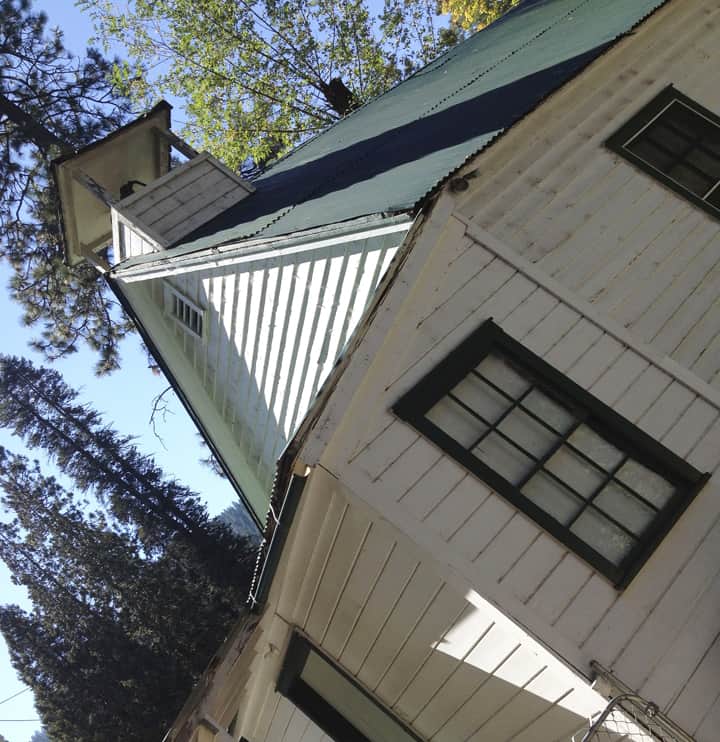 The first post from Downieville centered around my trip up here with my running companion Coco (Read: 2013 Downieville Sabbatical – “just us two dogs”) (See: Downieville Antique Bottle Show Dinner Party). This second post deals with a side trip that Jerry Forbes, Steve Bird, Coco and myself took this past Sunday to Goodyears Bar.

The Goodyear boys built a sturdy cabin and before long the rich deposits attracted a number of miners to their camp, which was given the name Goodyears Bar in honor of its founders. 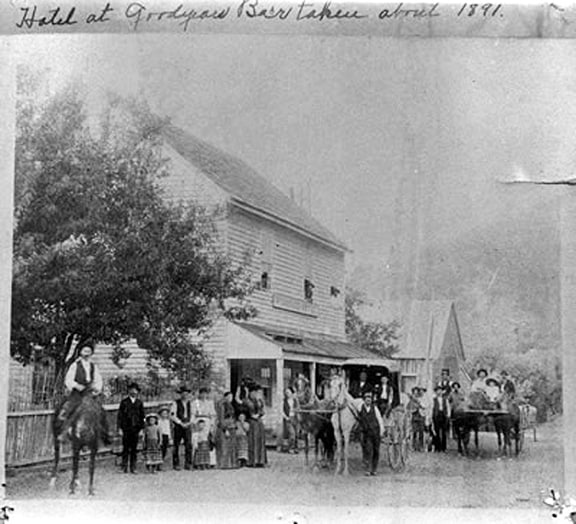 Goodyears Bar in this case, does not mean a bar as in a saloon, nor a bar as in gold bar. It means bar as in a shoal or sandbar. This would be a linear landform within or extending into a body of water, typically composed of sand, silt or small pebbles. 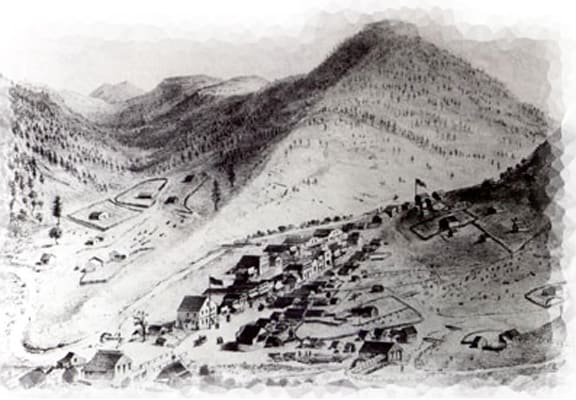 According to Wikipedia, Goodyears Bar, known as Slaughter’s Bar before 1851, is a census-designated place in Sierra County, California. Goodyears Bar is located along the North Yuba River and California State Route 49, 3.25 miles west-southwest of Downieville. The post office opened in 1851. The 2010 United States Census reported that Goodyears Bar had a population of 68. 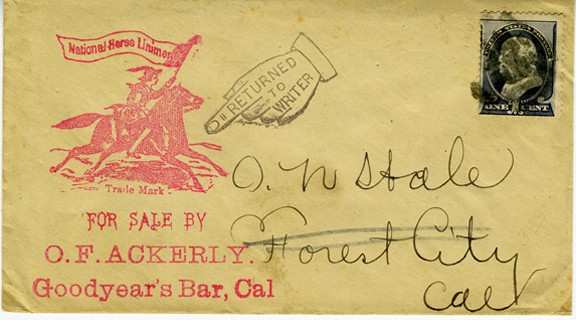 [from the California Gold Country]

The brothers Miles and Andrew Goodyear, along with a Dr. Vaughan and a Mr. Morrison, prospected here in the summer of 1849 and found gold enough for their liking to settle down at this crossing of the Yuba River. The Goodyear boys built a sturdy cabin and before long the rich deposits attracted a number of miners to their camp, which was given the name Goodyears Bar in honor of its founders.

Miles Goodyear, a native of Connecticut, had come west with a missionary party led by Dr. Marcus Whitman who was on his way to establish a mission along the Columbia River. After a falling out with the good doctor, Miles headed off into the wilderness and eventually settled down in Utah Territory, building a cabin of cottonwood logs in either 1844 or 1845 on the site of the future town of Ogden. When the Mormons arrived a couple of years later, Miles left and joined his brother in California and began prospecting. Shortly after settling down at Goodyears Bar, Miles took ill, and after lingering on for a few months, died on November 12 of 1849. Andrew wrapped his brother in a buffalo robe and buried him in an old rocker on a point opposite the bar, where he remained until his brother took his bones to Benicia, his final resting place.

Goodyears Creek was incredibly rich along its entire length, having been literally fed gold for thousands of years as it chewed through gold-bearing ledges and the beds of ancient rivers and streams.

Goodyears Creek was incredibly rich along its entire length, having been literally fed gold for thousands of years as it chewed through gold-bearing ledges and the beds of ancient rivers and streams. At one spot near the upper end of the bar, a group of men cleaned up $2,000 in gold from a single wheelbarrow of dirt. Finds such as this spurred the miners to prospect every bar on the river, resulting in some of the most interesting named camps in the Gold Country. Cut-Throat Bar, so named because a sick German cut his own throat there. Hoodoo Bar, named for the peculiar manner in which the local Indians said How-dye-do, Nigger Slide, St. Joe’s Bar, and Ranty Doodler Bar were all rich camps in the vicinity.

Cut-Throat Bar, so named because a sick German cut his own throat there. Hoodoo Bar, named for the peculiar manner in which the local Indians said How-dye-do, Nigger Slide, St. Joe’s Bar, and Ranty Doodler Bar were all rich camps in the vicinity.

The camp suffered great hardships during the winter of 1849/50 as snowfalls came earlier and in greater depths than usual. Food became terribly scarce as supply trains could no longer reach the town. When parties from the outlying camps came in with the hopes of purchasing supplies, they found what little there was to buy food, tools, or blankets sold for the same price: $4 a pound. Many left for lower ground to wait out the winter. Some of those who remained were forced to dine on beef bones from a dead animal found lying on the bar before supplies finally arrived.

Good fortune returned to the bar with the arrival of spring. In fact, the area grew so rapidly between the years of 1850 and 1852 that the claims staked along the Yuba, Goodyears Creek, Woodruff and Rock creeks formed an unbroken chain which rivaled Downieville in importance. Goodyears Bar had all the trappings of civilization; express office, saloons, stores, hotels, bakeries, restaurants, churches, and many cabins and dwellings. The post office was established on October 7 of 1851, with Mr. Woodruff as the first Postmaster and by 1852 the camp polled more than six hundred votes. Mining was being carried on extensively, mostly with flumes erected to divert the waters of the Yuba so the rich bed could be worked thoroughly.

The towns first school was a private one begun in 1856 with a Mrs. Massey as the first teacher. The money needed for the erection of the schoolhouse and for the teachers salary came from donations made by the townsfolk. If additional monies were needed for books or furnishings, a fund raiser would be held, generally raising the amount needed.

With a good number of kids in town, it is no wonder there were also a bunch of dogs. In fact, there were apparently too many dogs at one time, for early in the town is history the following notice was posted:

All dogs within the limits of Goodyears Bar will please take notice, that by the laws of said town, you are required to call immediately to the marshalls office and obtain a tag. On and after four days all dogs found within said limits without a tag will be impounded at their own expense, and after imprisonment for three days will be shot until they are dead.

Records fail to show if the dogs heeded the notice.

Nothing much from the mining days remains in Goodyears Bar, but the beautiful setting of this historic gold camp more than makes up for any lack of Gold Rush remains. Situated at an elevation of 2,700 feet, the town rests on a small flat on the south side of the Yuba River, almost upon the abandoned diggings themselves. Towering mountains surround the old river camp Saddle Back, Monte Cristo, Fur Cap, Grizzly Peak, and others cloaked with a thick green mantle of pines, oaks, maple and dogwood, except for spots where the granite rock of the Sierra remains uncovered. 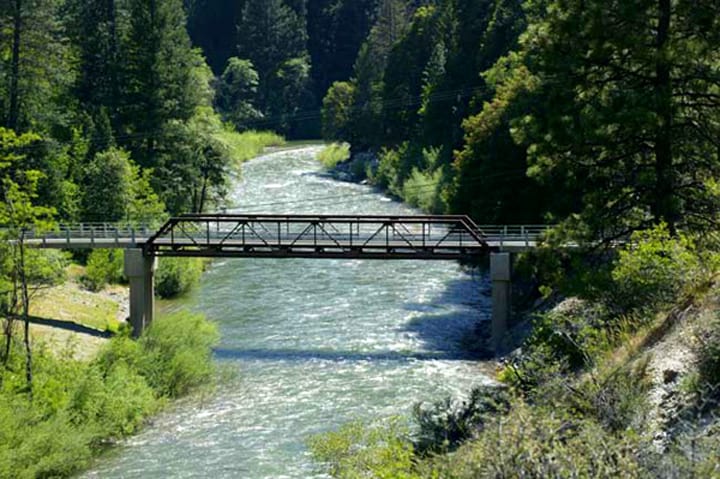 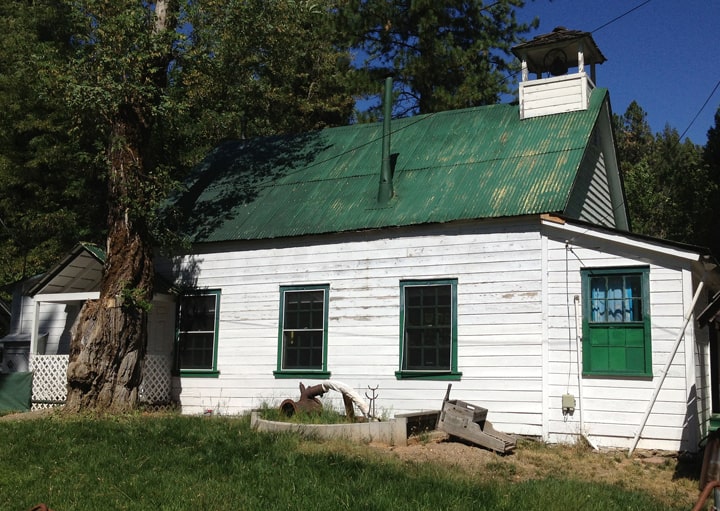 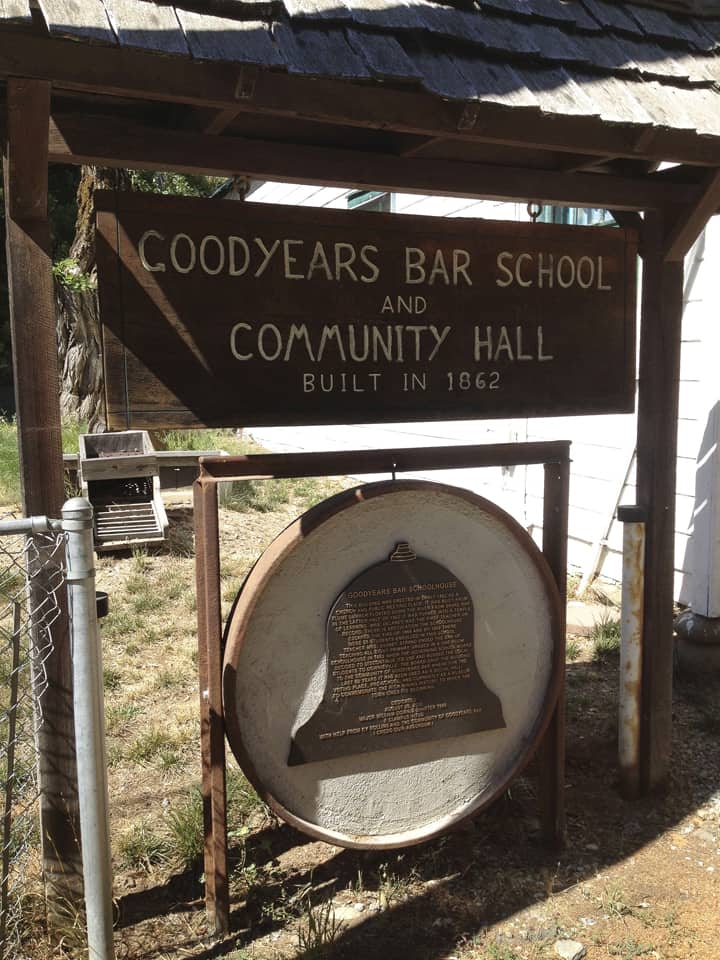 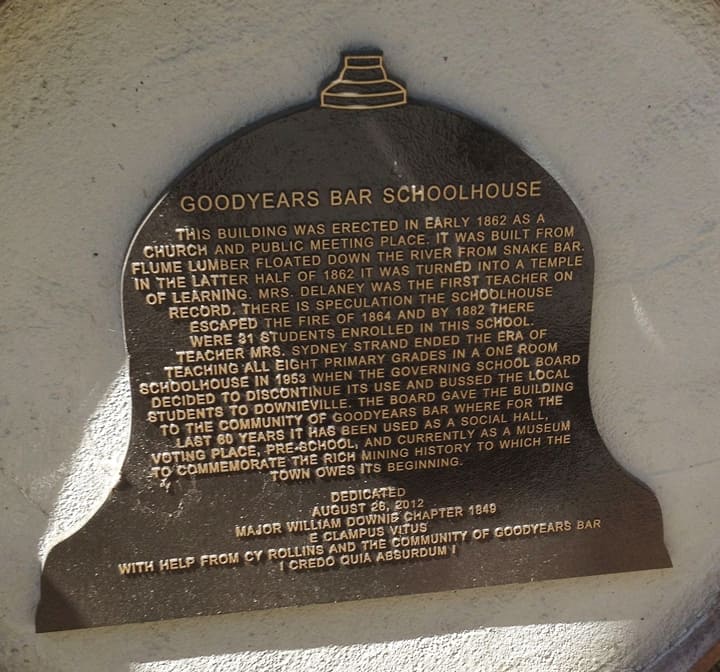 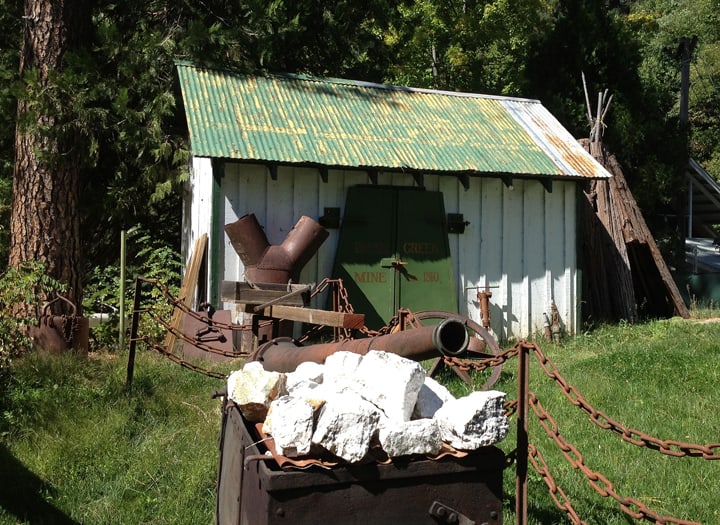 Schoolhouse yard is now a museum of mining relics 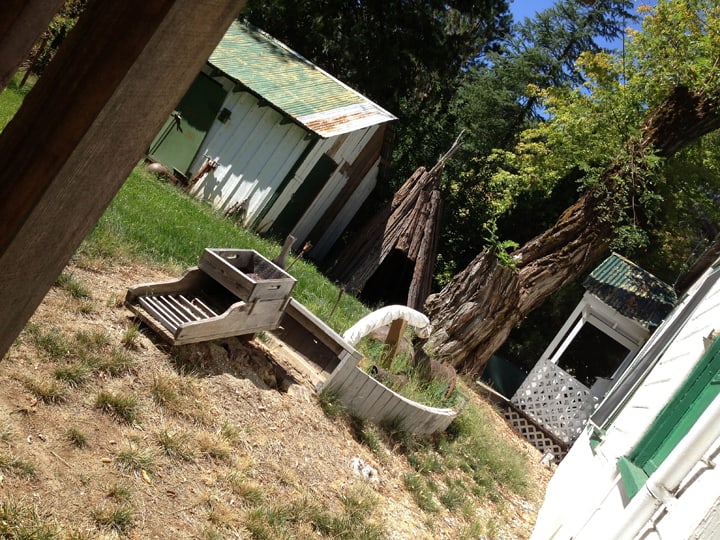 Another picture of the schoolhouse yard. Look at the bark tee-pee. 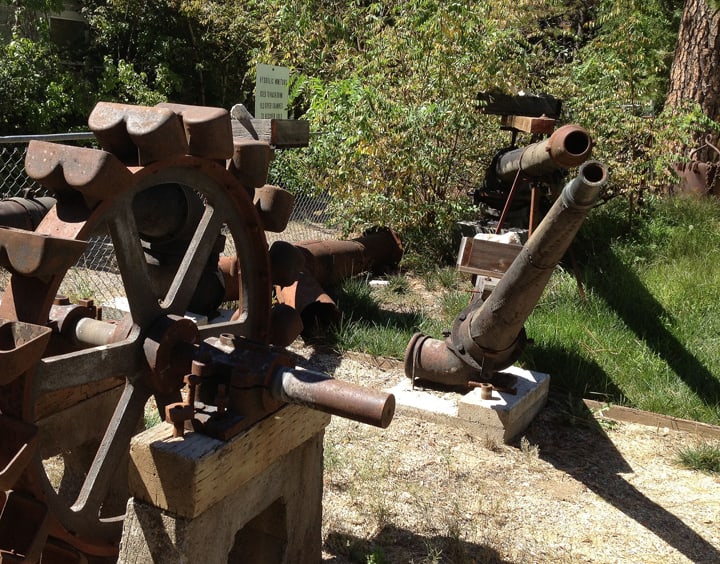 Water canons for blasting the mountains to loosen the soil. 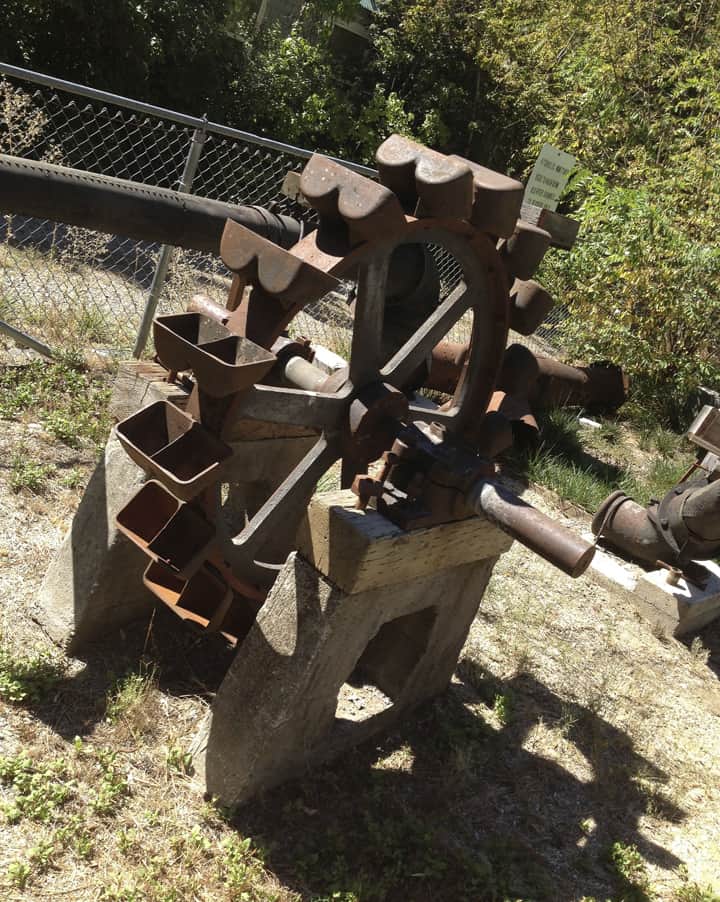 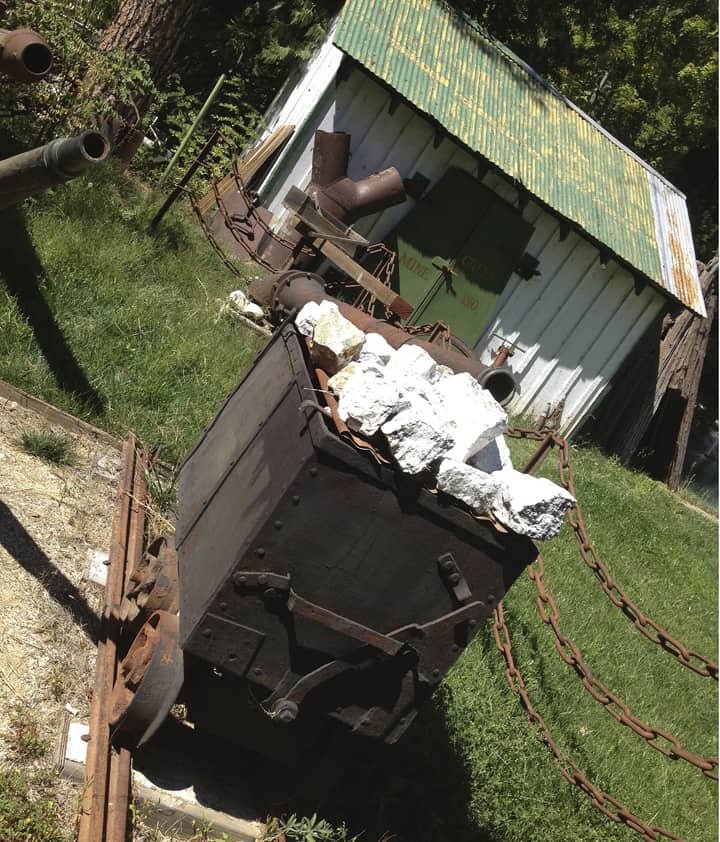 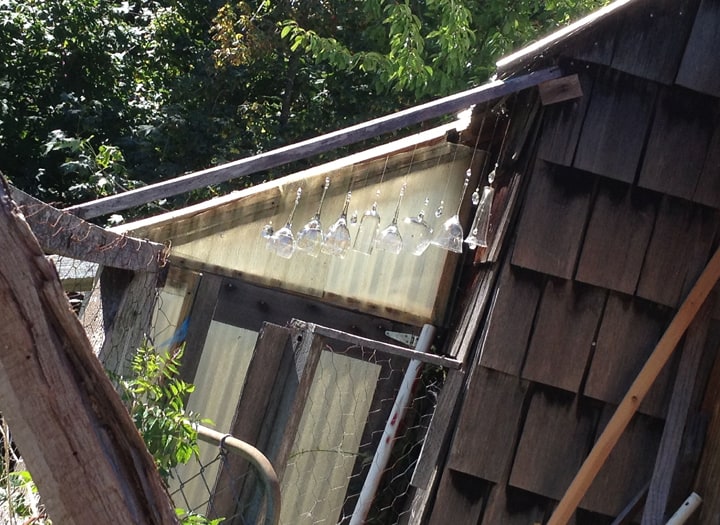 While we were looking around Goodyears Bar, Jerry and Steve remembered an old town dump that they had discovered during a previous outing. It happens that the dump is over two abandoned and closed off mines, one being a Chinese mine due to the labor used. It seemes that the path far above the mines was a great spot to throw trash. So here you have about 160 years or more of trash.

The claim holder for the area and his black dog (fun for Coco) joined us and helped dig bottles. He seemed to know a lot about the history of the mines. He said most bottles have already been picked over the years. According to this fellow, we are talking tens of thousands of bottles if you can believe him. As we climbed up the hill, you could see a ledge with bottles beneath in the dirt. The rocks and debris field was littered with sharp glass.

After a dangerous climb up the hill, Jerry and the claim fellow were puling a bottle every thirty seconds or so. Unfortunately, most of these bottles were 1930’s era though wee a few corkers. I can only imaging what is beneath or what was pulled before. The amount of broken glass and plates is staggering.

Here are a few pictures I took. 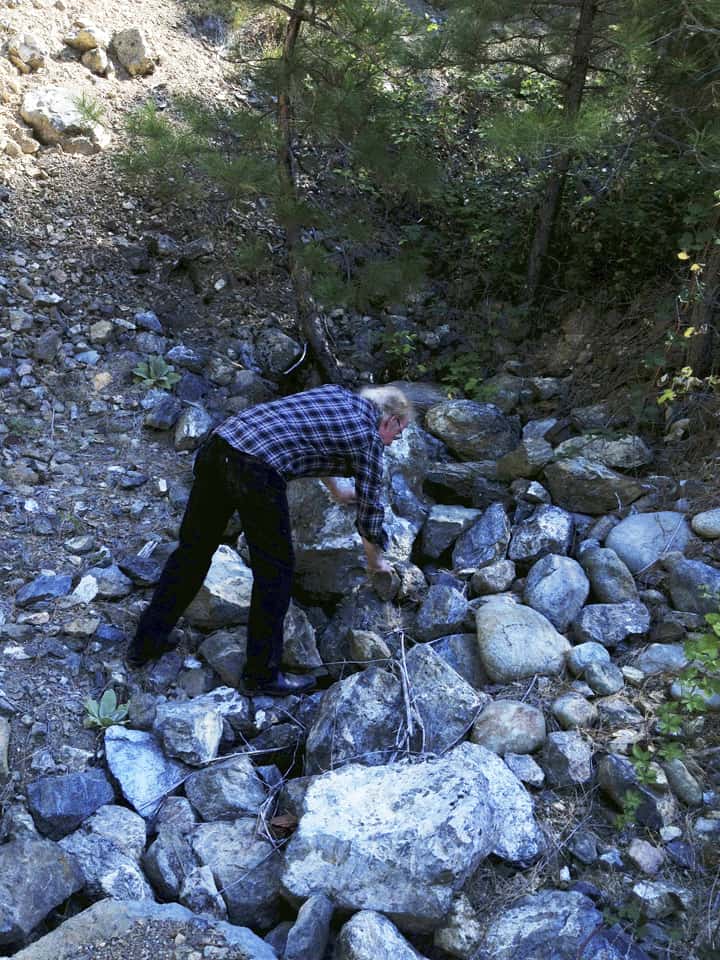 The Chinese mine entrance, long since closed off. Jerry Forbes pokes around. 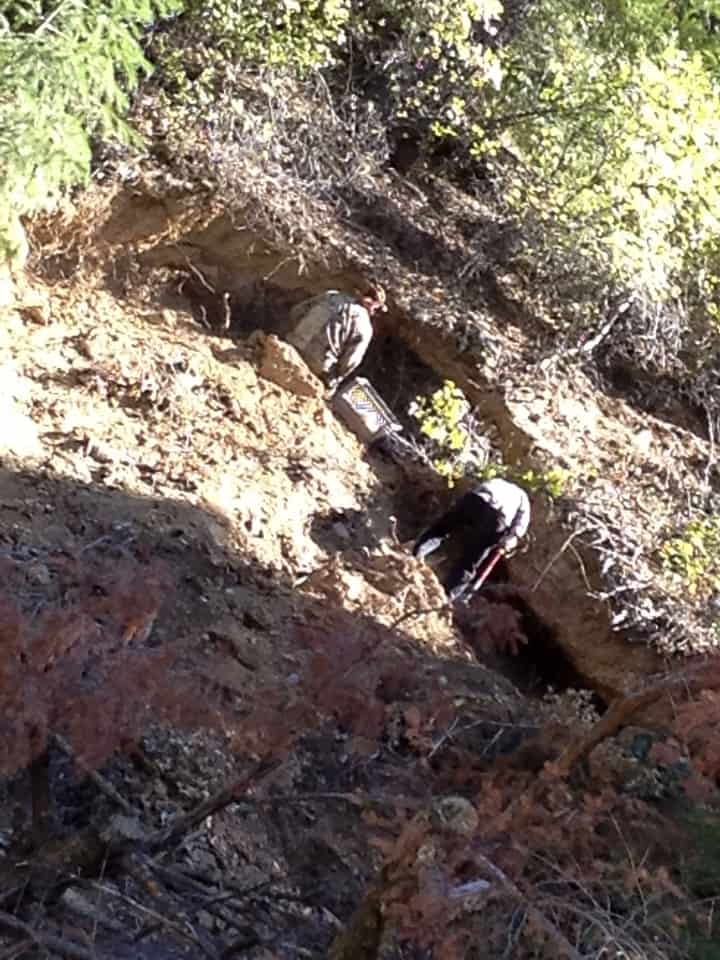 The dangerous ledge. Dozens of bottles underneath the overhang. The mine entrances are down hill. 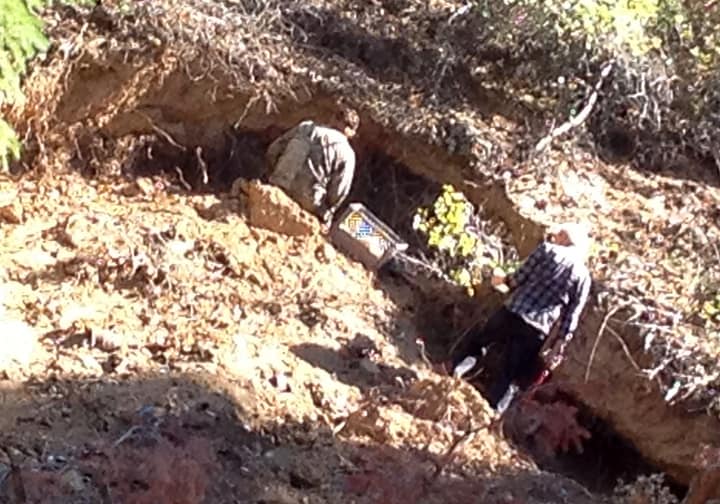 Closer-up shot of the ledge. The plastic bin is full of newly uncovered bottles. 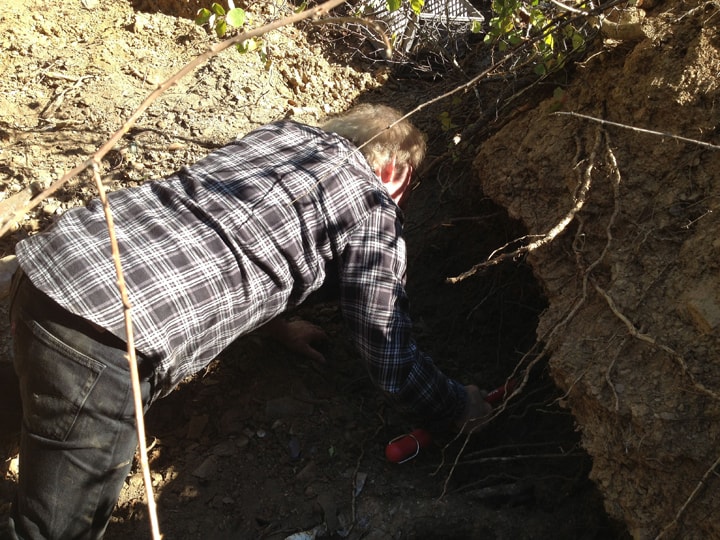 Searching for bottles beneath the overhang ledge in the dump. 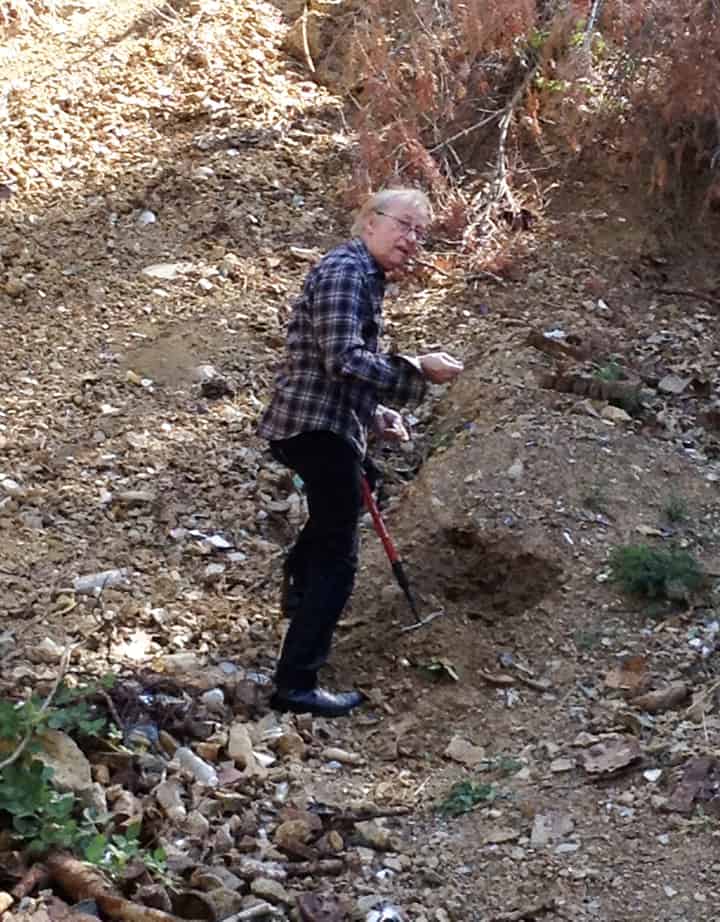 The lower dump debris field had lots of old plates and glass shards. Some looked rather old. 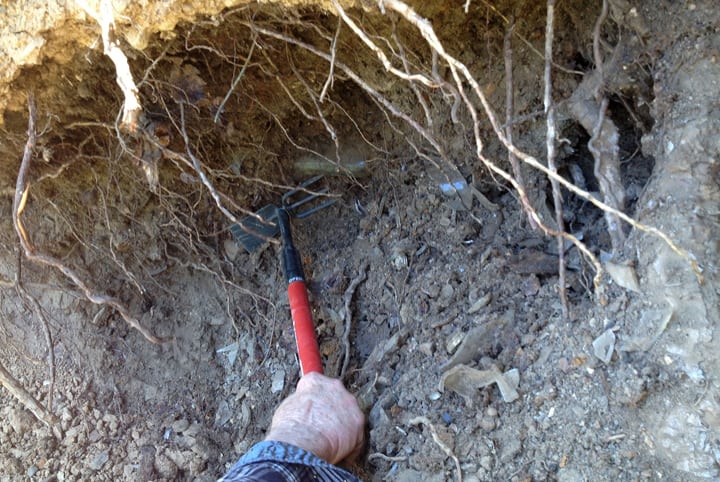 Honing in on a bottle. I kept thinking the ledge would cave in. 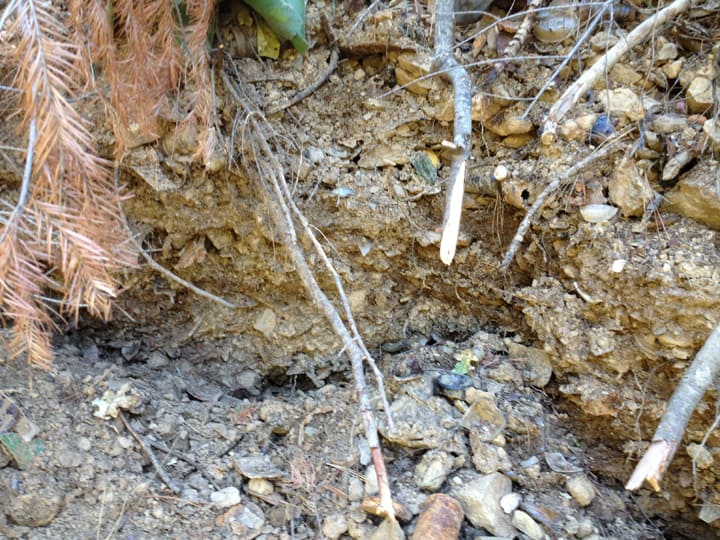 Lots and lots of glass pieces. We did not have gloves. Problem! 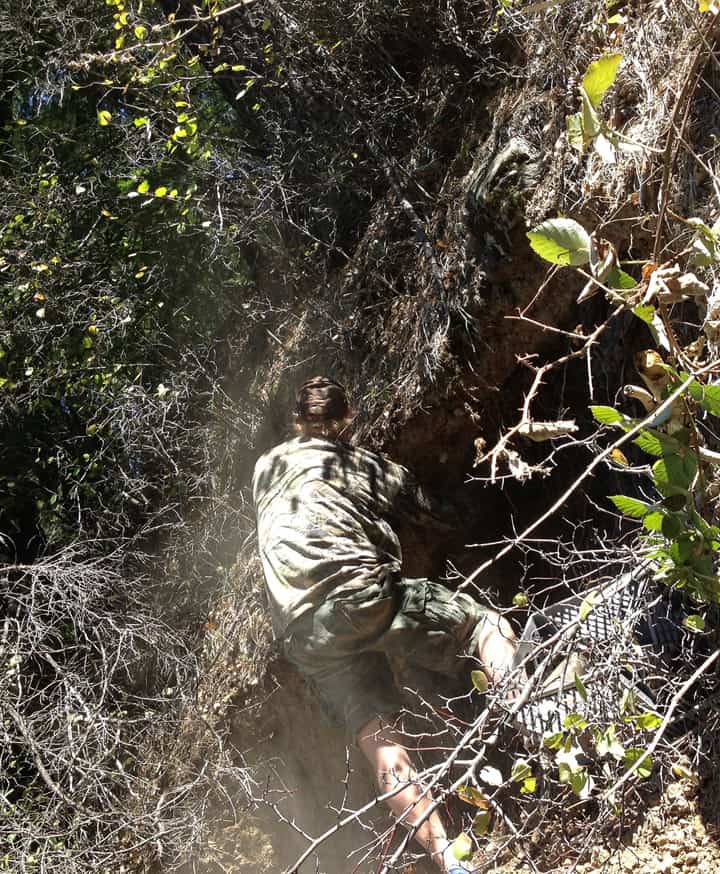 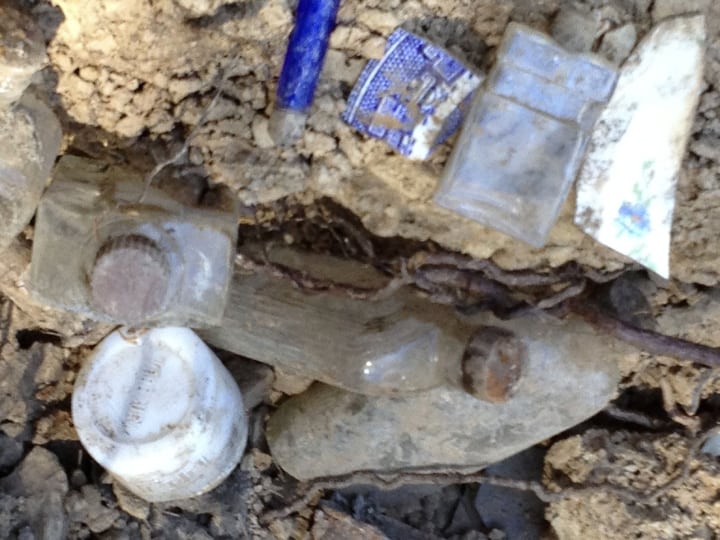 A few of our finds. 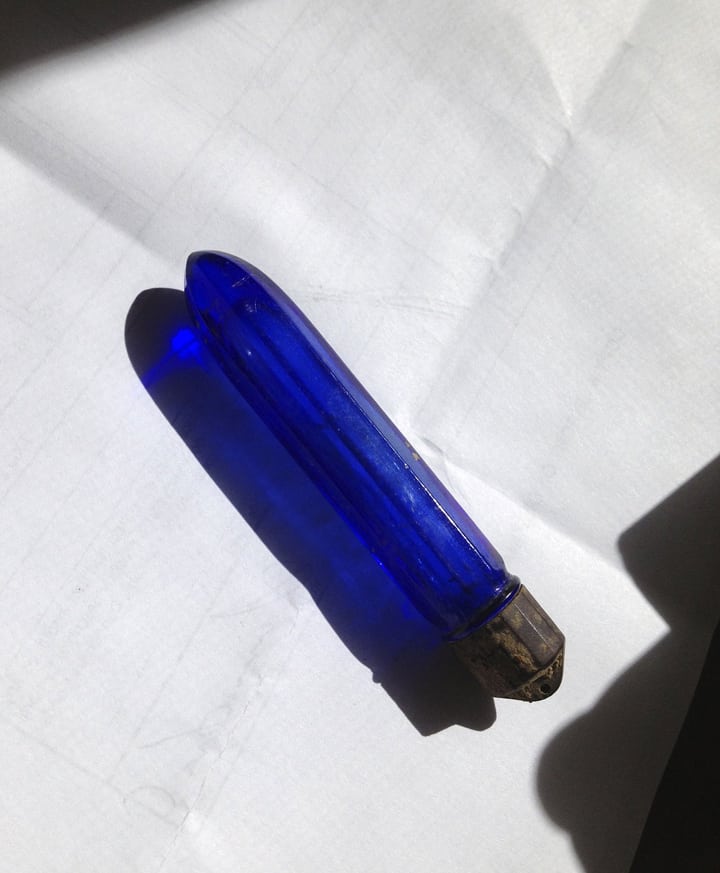 Jerry found this cool vial, probably worn around the neck with a perfume. 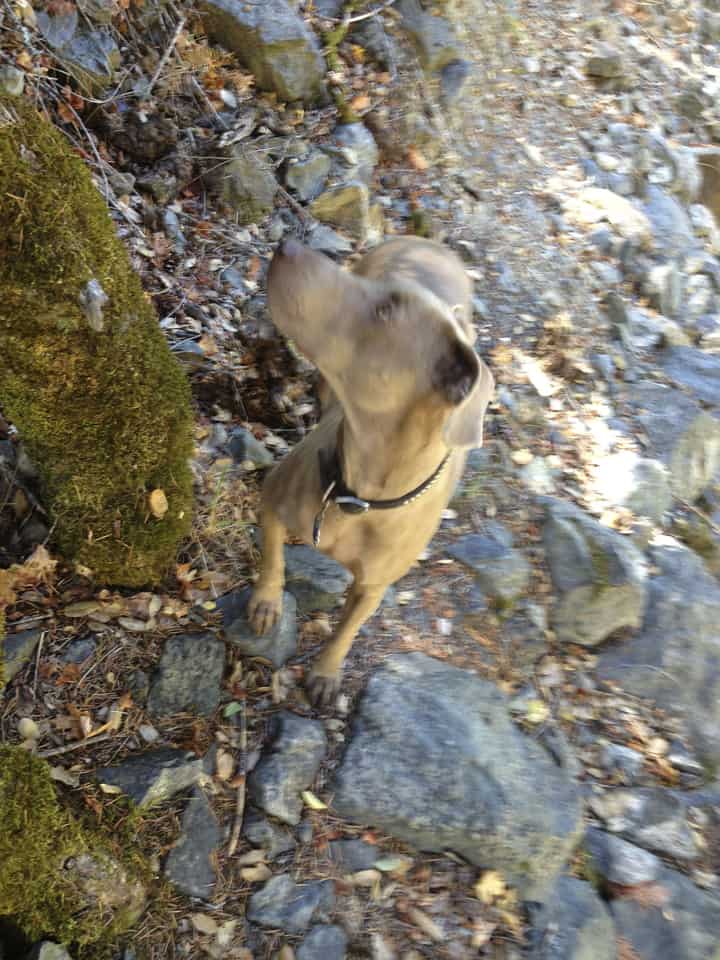 Coco played the whole time. I had to keep her away from all the broken glass. 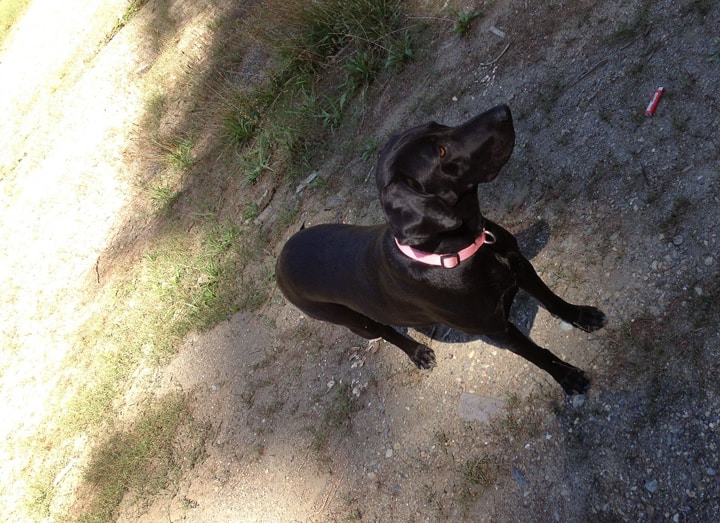 Ferdinand Meyer V is a native of Baltimore, Maryland and has a BFA in Fine Art and Graphic Design from the Kansas City Art Institute and School of Design. Ferdinand is the founding Principal of FMG Design, a nationally recognized design consultation firm. Ferdinand is a passionate collector of American historical glass specializing in bitters bottles, color runs and related classic figural bottles. He is married to Elizabeth Jane Meyer and lives in Houston, Texas with their daughter and three wonderful grandchildren. The Meyers are also very involved in Quarter Horses, antiques and early United States postage stamps. Ferdinand is the past 6-year President of the Federation of Historical Bottle Collectors and is one of the founding members of the FOHBC Virtual Museum.
View all posts by Ferdinand Meyer V →
This entry was posted in Digging and Finding, History, Museums, News and tagged Andrew Goodyear, california, camp, Chinese, Coco, Downieville, Dr. Vaughan, gold, Goodyears Bar, Jerry Forbes, Miles Goodyear, mining, Morrison, Slaughter's Bar, Steve Bird, Yuba River. Bookmark the permalink.