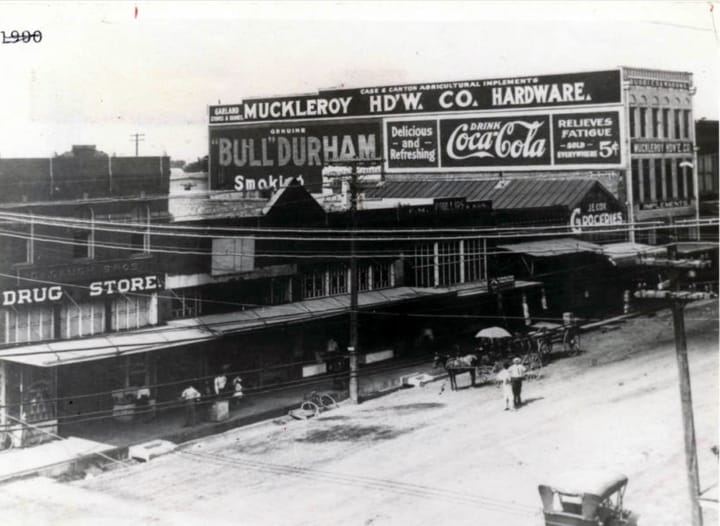 Drug Store in Terrell, Texas. One can only wonder if the Cotton-Patch Bitters once graced the shelves of the store. I wonder if this was the original Dansby Drug Store?

When I posted the information about the Dansby’s Cotton-Patch Bitters from Terrell, Texas, (Read: Where is that Dansby’s Cotton-Patch Bitters from Terrell, Texas?) I came across the above picture of a Drug Store sign in Terrell on Main Street and wondered if it was the Dansby Drug Store? Marianne Dow picked up on my question, and as she has done on previous posts, put together some nice detective work to answer my question.

No information on your desired bottle, but I found Dansby’s drug store.

I blew up your picture to see that the postcard shows the DeGaugh Brothers Drug Store — then a quick google confirmed it. source Apparently R. C. Dansby’s Drug Store changed hands and names a few times and there was more than one location.

Refer to this Historical marker for one location — link — says:

Walter Dickson Adams and the Adams Drugstore – A native of Kaufman County, Walter Dickson Adams (1872-1961) came to Forney in 1887. In 1893 he purchased the F. M. Adams Drugstore, a successor of the R. C. Dansby Drugstore established in 1878. He was the town’s most prominent druggist for the next sixty-eight years. Originally on S. Bois D’Arc Street, the store was relocated to Main Street in 1901. A respected community leader, Adams was elected mayor in 1912 and held offices in state and national professional organizations. Still a thriving local business, the Adams Drugstore was moved to this site in 1976.

It appears one is now a quilting shop. source The original R.C. Dansby Drug Store that was built in 1891 is now a quilt shop. 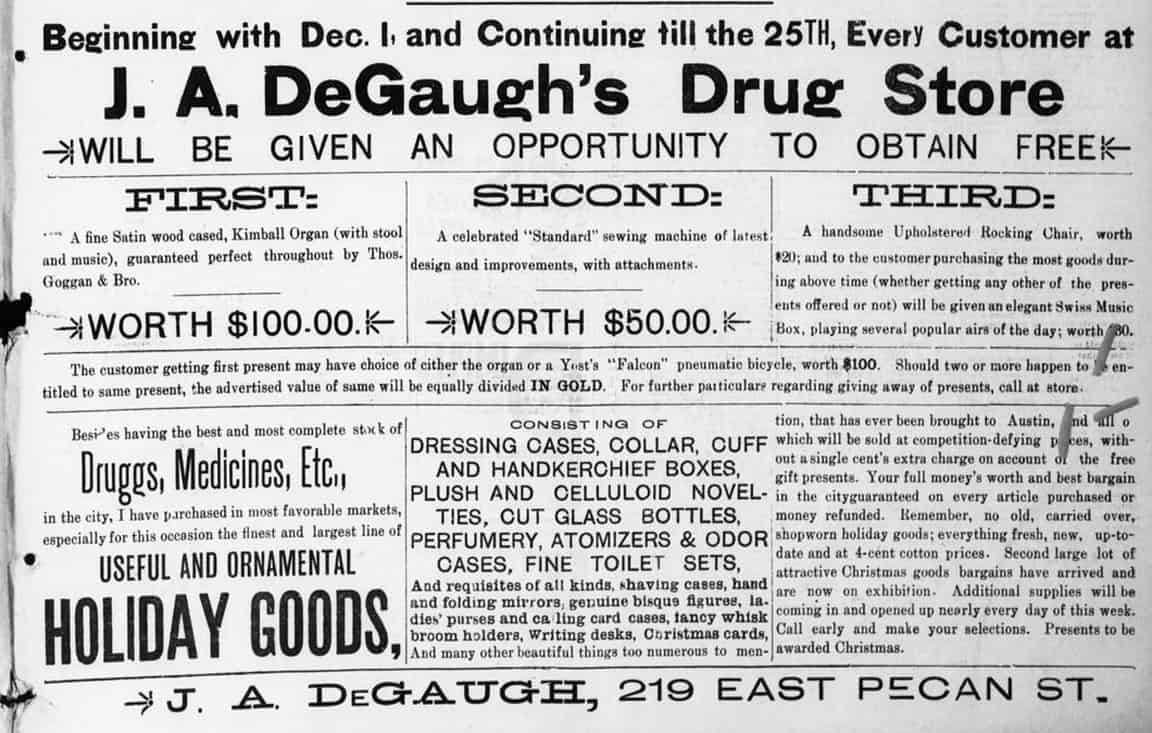 Ferdinand Meyer V is a native of Baltimore, Maryland and has a BFA in Fine Art and Graphic Design from the Kansas City Art Institute and School of Design. Ferdinand is the founding Principal of FMG Design, a nationally recognized design consultation firm. Ferdinand is a passionate collector of American historical glass specializing in bitters bottles, color runs and related classic figural bottles. He is married to Elizabeth Jane Meyer and lives in Houston, Texas with their daughter and three wonderful grandchildren. The Meyers are also very involved in Quarter Horses, antiques and early United States postage stamps. Ferdinand is the past 6-year President of the Federation of Historical Bottle Collectors and is one of the founding members of the FOHBC Virtual Museum.
View all posts by Ferdinand Meyer V →
This entry was posted in Bitters, Druggist & Drugstore, History, Questions and tagged Cotton-Patch, Dansby, DeGaugh, F. M. Adams, John Albert DeGaugh, Kaufman County, Marianne Dow, R. C. Dansby, Terrell, texas, Walter Dickson Adams. Bookmark the permalink.

1 Response to Some nice Detective Work on R. C. Dansby