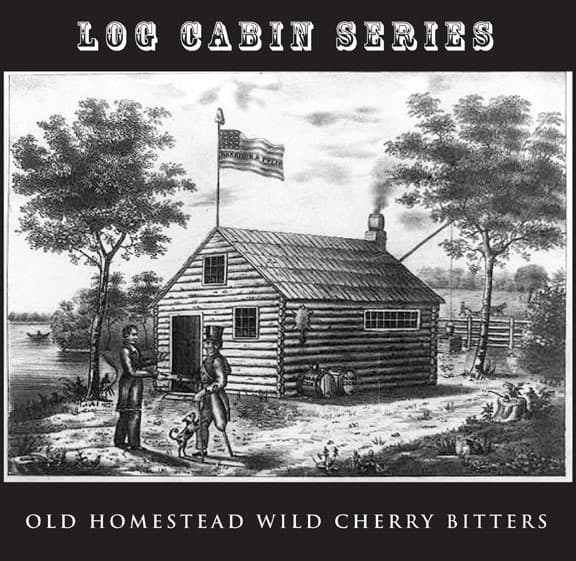 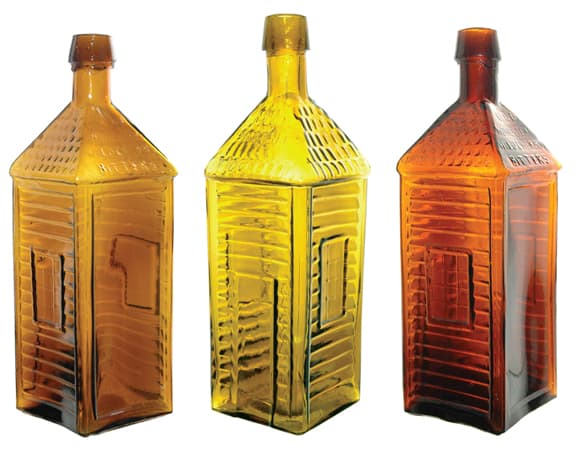 Patronized by the medical profession, the military hospitals, as well as the bar, the saloon and the sideboard, they supply the desideratum so long demanded by the public as the Universal Friend.

With the holidays, it is finally time to do a comprehensive series on figural log cabin bottles. And wow, what a way to start with the widely popular Old Homestead Wild Cherry Bitters. As Wisconsin collector, Jeff Burkhardt reminds us, technically it is not a log cabin, but a clapboard-sided house bottle. None-the-less, it will be our starter and the Old Homestead is certainly grouped as a figural cabin. 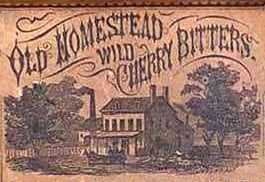 Old Homestead Wild Cherry Bitters was trade marked in June 1863 by George Scott from Rome, New York. His design was patented in 1864 and was marketed by Thomas B. Slingerland & Company. They were partners.

George Scott was born in England in 1827 and was one of Rome, New Yorks oldest and best known residents. He came to the United States as a young child with his parents. The family located in Troy, New York. As a teen, young Geoge learned the printing trade from Horace N. Bill, who at that time published the Old Roman Citizen. After completing his apprenticeship, he and Alfred Sandford purchased the paper, their firm being called Sandford & Scott.

He later disposed of his interest in the paper and entered the drug business and located on Dominick Street in Troy eventually becoming the sole owner of a drug store. After a few years, he disposed of this business and moved to New York City and opened up a drug store on Beekman Street. While in New York, he perfected the formula for Old Homestead Wild Cherry Bitters, and returning to Rome, began its manufacture and sale on an extensive scale, partnering with Thomas Butler Slingerland. Their headquarters in Troy was on South James Street opposite Stanwix Hall. Slingerland was primarily a tobacco and cigar dealer.

With the death of his partner in the mid 1880s, Scott left the drug store concern and entered the real estate business. Later he would file a lawsuit against the Slingerland estate.

Manufacturer and Jobber in

Old Homestead Wild Cherry Bitters come in a wide variety of drop-dead gorgeous colors such as the lemon yellow example pictured below which was previously sold by Ed and Kathy Gray with GreatAntiqueBottles.com.

There are a number of variants of the Old Homestead bottle which include 12 pane and 15 pane windows of which I can not find a good picture of the 15 pane variant. There is an illustration of the 15 pane variant in Bitters Bottles. There are also variants with the door ending above the base and another with the door going to the bottom of the bottle. You will see examples in this post. You will also see the ‘best of the best’ Old Homestead examples including the cobalt blue example and the emerald green example with the inside screw top. These examples are considered among the top bitters bottles.

Note: I am looking for advertising and labeled examples for this post. 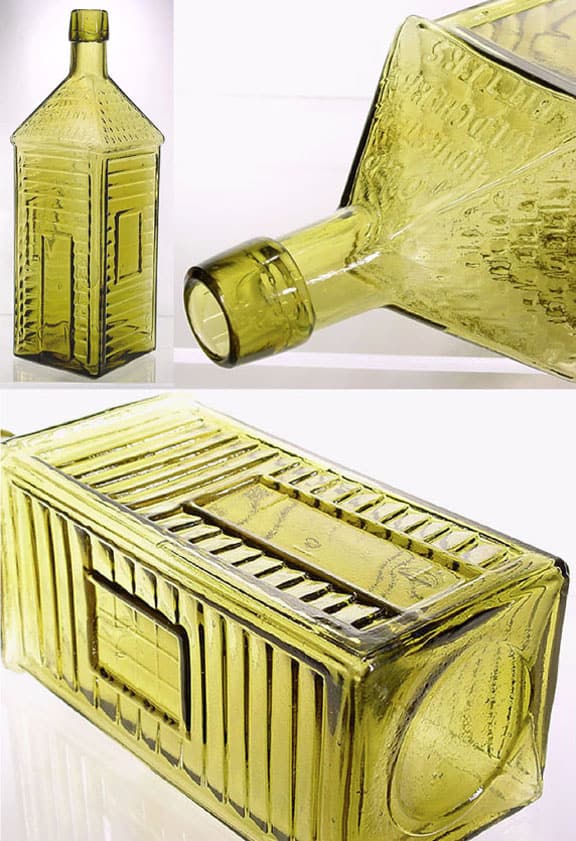 “To the above are added Clove Buds, Orange, Carraway, Coriander and Snake Root. The whole is combined by a perfect chemical process, and under the immediate supervision of a skillful and scientific Pharmaceutist…are put up in patent bottles, representing a Swiss cottage, and are an ornament to the sideboard.”

What is interesting in the above advertising text is the reference to a Swiss cottage and the obvious use of a cabin figural form to be pleasing to the eye when placed in a sideboard. 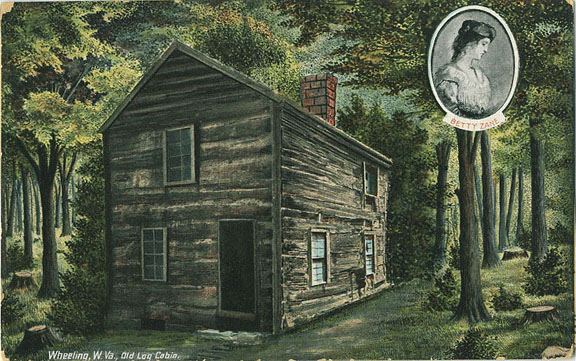 The style of Ebenezer Zane’s Old Log Cabin reminds me of the Old Homestead Wild Cherry Bitters form. The first building erected in Wheeling built 1769, torn down 1908. This is the cabin to which Elizabeth Zane made her heroic dash for powder during the siege of Ft. Henry by the British and Indians. Postmarked 1909. – Historic Wheeling Wiki 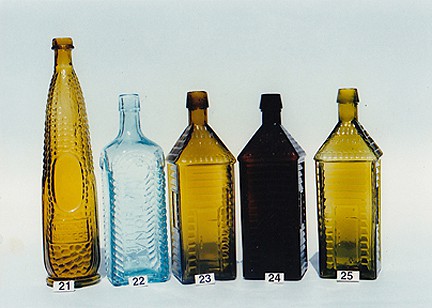 These bitters are in an eminent degree strengthening, purifying, diuretic, stimulating and nourishing to the whole system, giving new life and activity to every organ and part alike, without that ever recurring reaction that follows the use of all other tonics and stimulants ever before discovered.

As a morning appetizer, no other tonic or stimulant in the universe can equal them. For disordered digestion, imperfect circulation of the blood and exhausted vital energy, they give permanent and prompt relief. They nourish the blood, replenish the system, and every nerve and muscle is made to fulfill its natural functions.

No beverage or stimulant has ever given such universal satisfaction. Patronized by the medical profession, the military hospitals, as well as the bar, the saloon and the sideboard, they supply the desideratum so long demanded by the public as the Universal Friend.

Note: There are a number of variants of this bottle which include 12 pane and 15 pane windows with door ending above the base and going to bottom of the bottle. The Cobalt blue example, and the Emerald green with inside screw top example are considered among the top bitters bottles. Letterhead dated February 23, 1869, T. B. Slingerland, Rome NY.

Read: A couple of great Old Homesteads show up in Baltimore

“Whitney glass works had a huge presence in the city of New York in the mid 1800’s. The glass works clientele list of 1865 shows a Whitney Patent inside screw stopper for this bottle. It would be safe to assume that if they were producing inside screw stopper enclosures for this bottle that they would have access to the mold for the bottle as the tops were usually LTC type. I can’t see them importing topless bottles to put their inside screw stoppers on them. Although rare the bottle does exist. I also believe that they were produced in the Lancaster glass works in New York state and this alone explains the different colors we sometimes see in a lot of the bitters bottles.” – Steve Sewell (antique-bottles.net) 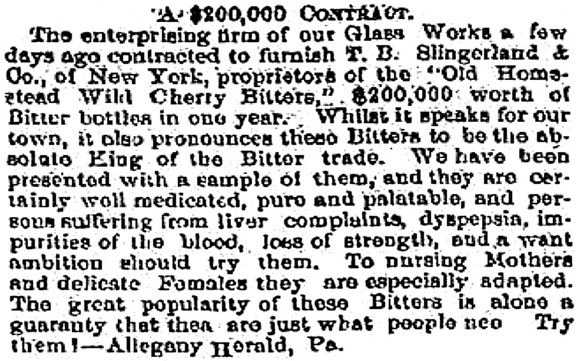 Newspaper clipping about a glass contract for Old Homestead Wild Cherry Bitters. It doesn’t specifically state the glass works but I believe they are referring to Pittsburgh (McKee & Brother(s)) – Brian Wolff 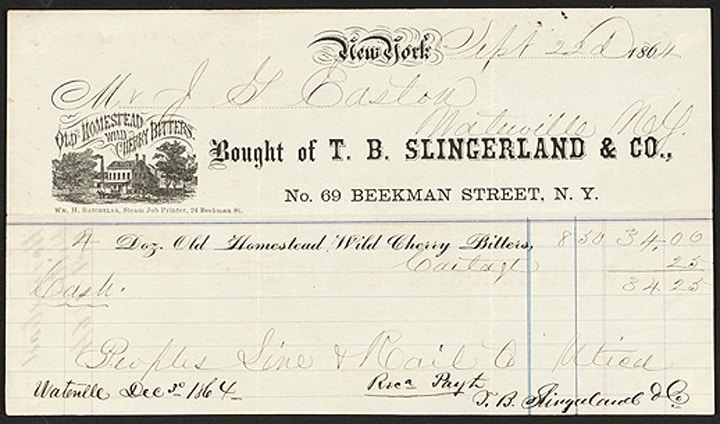 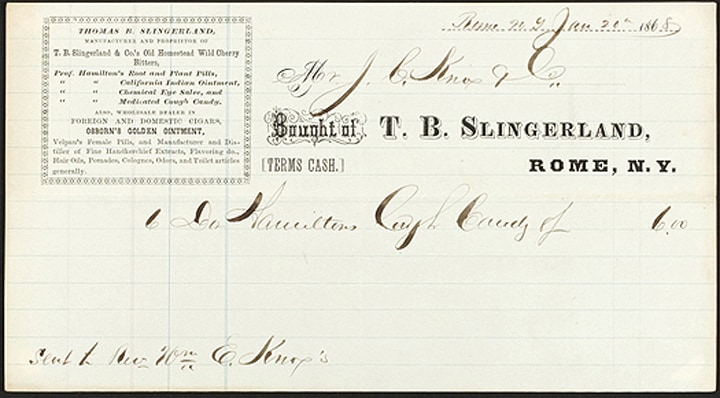 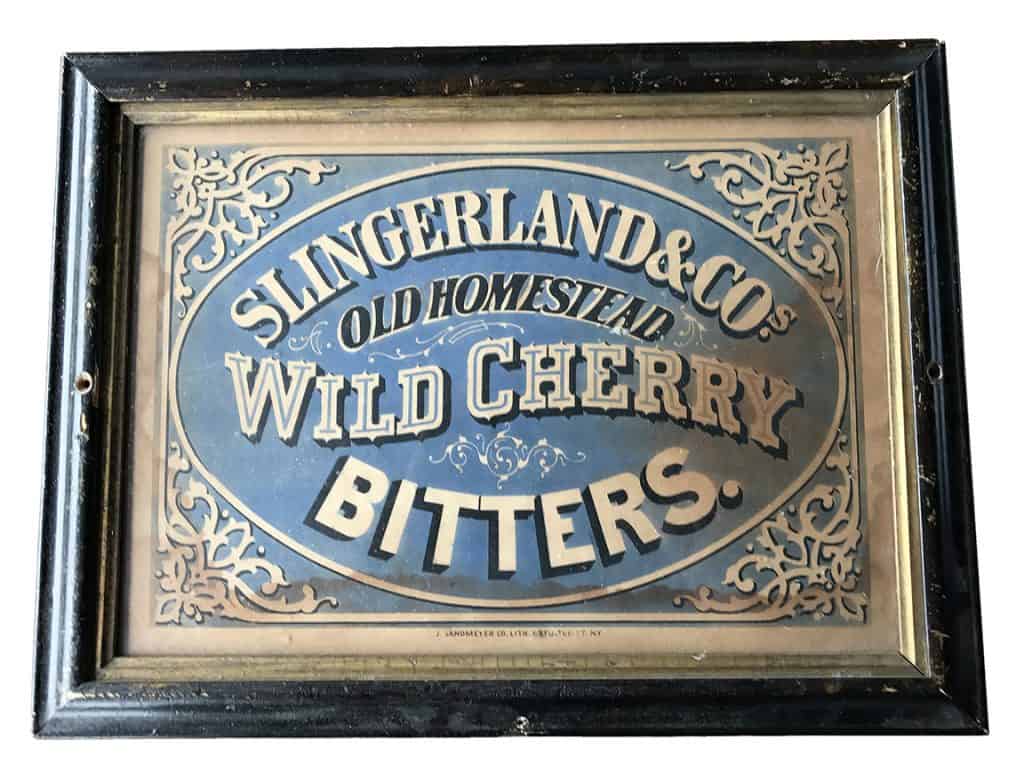 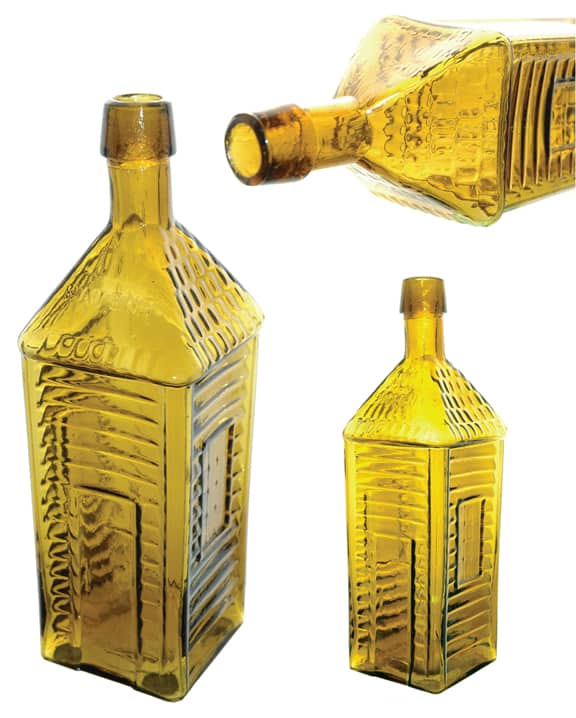 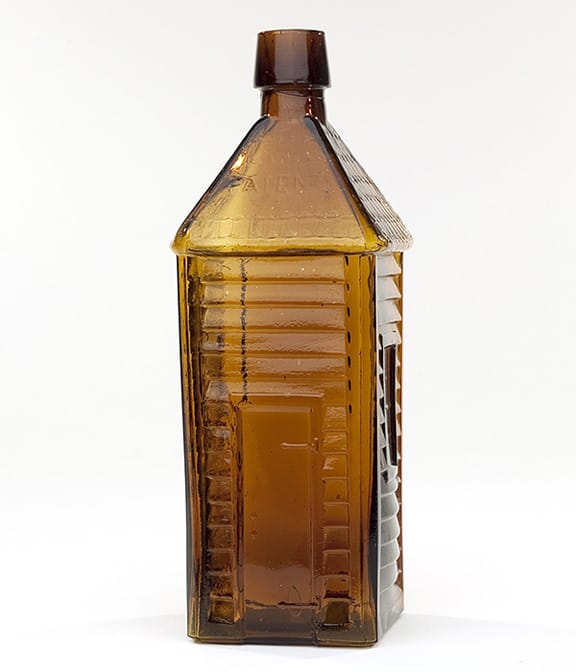 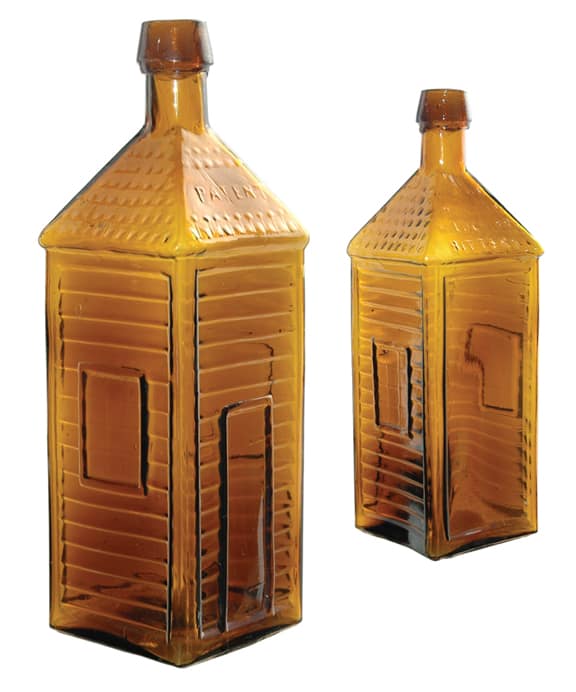 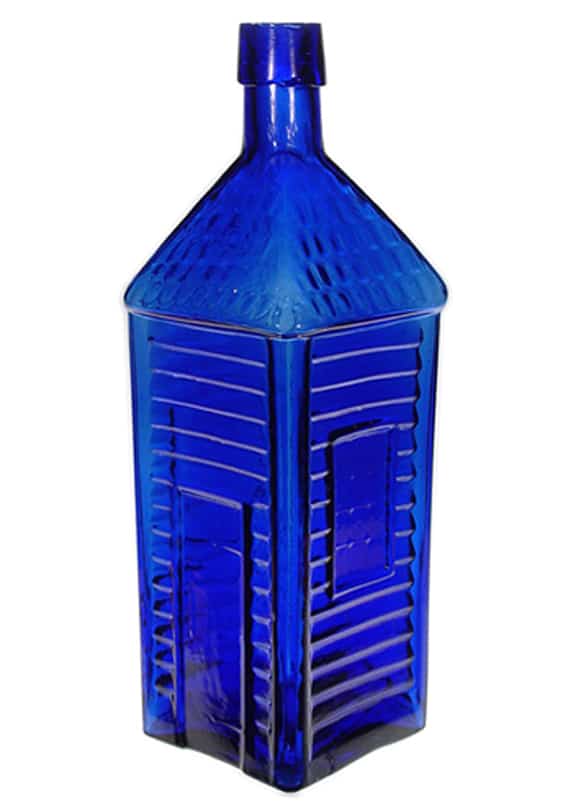 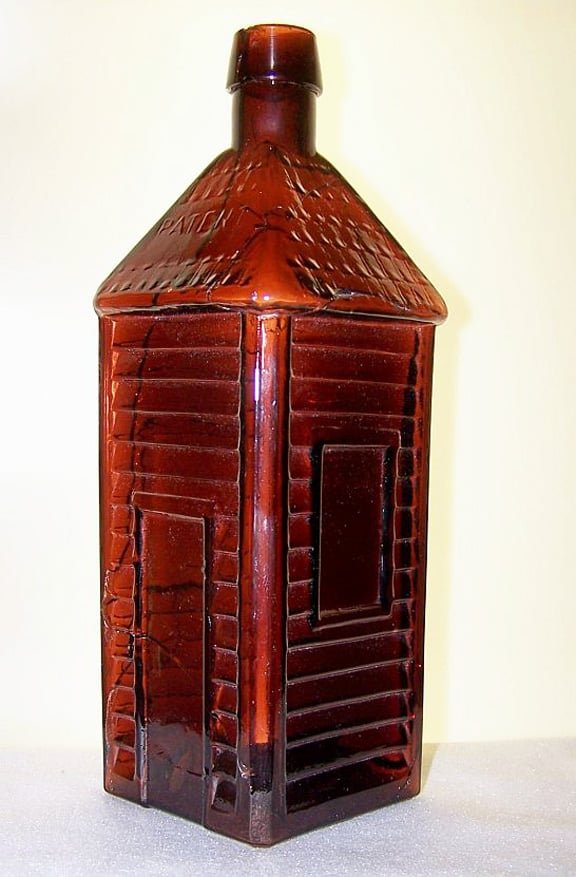 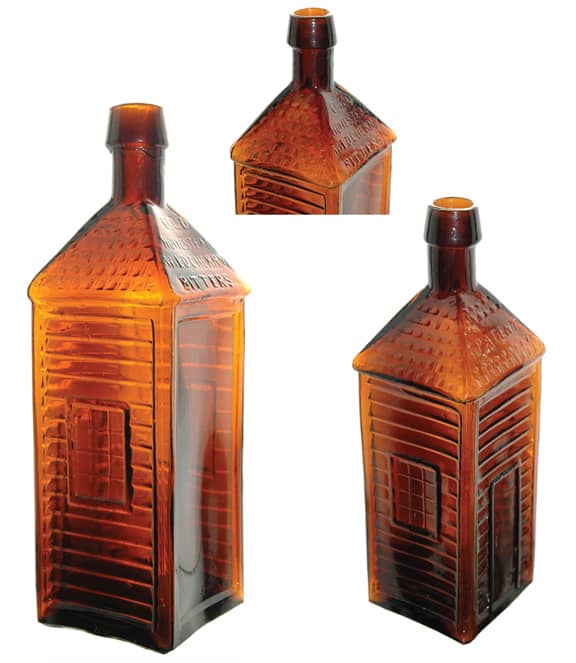 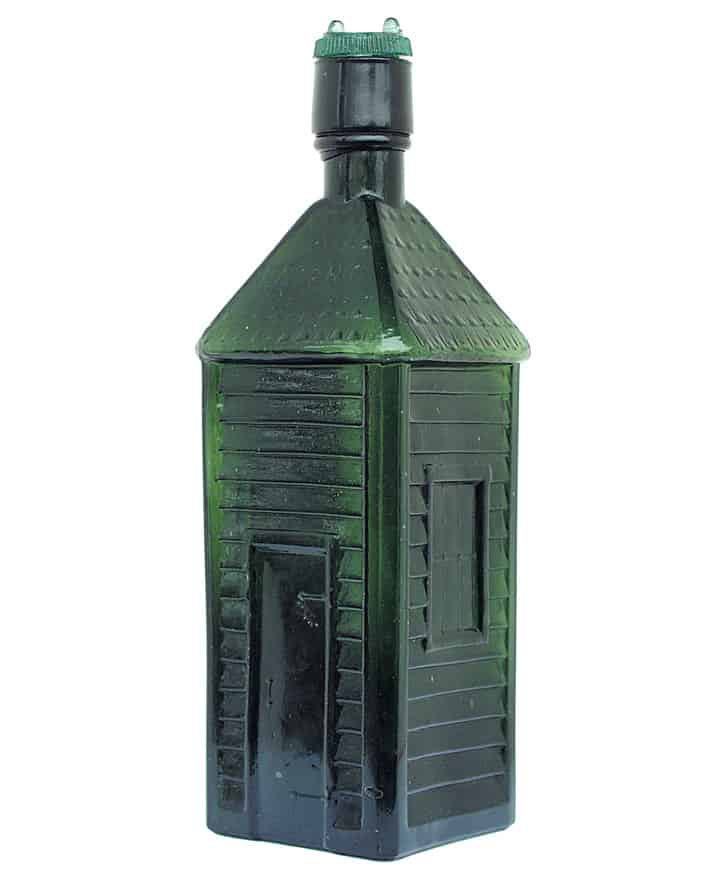 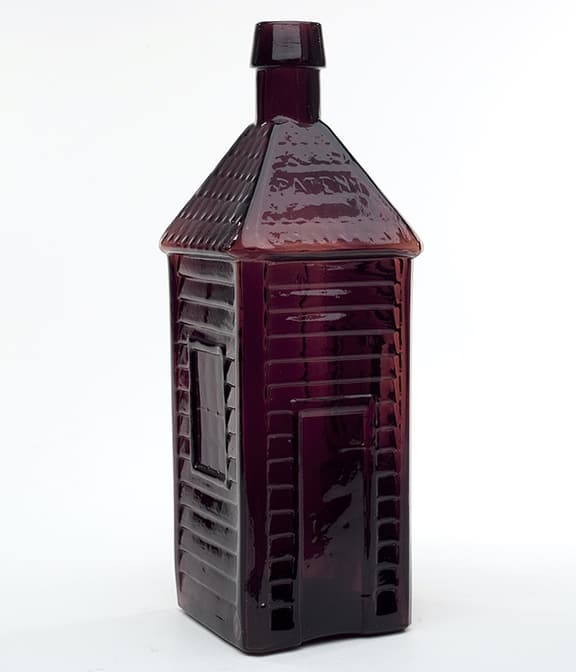 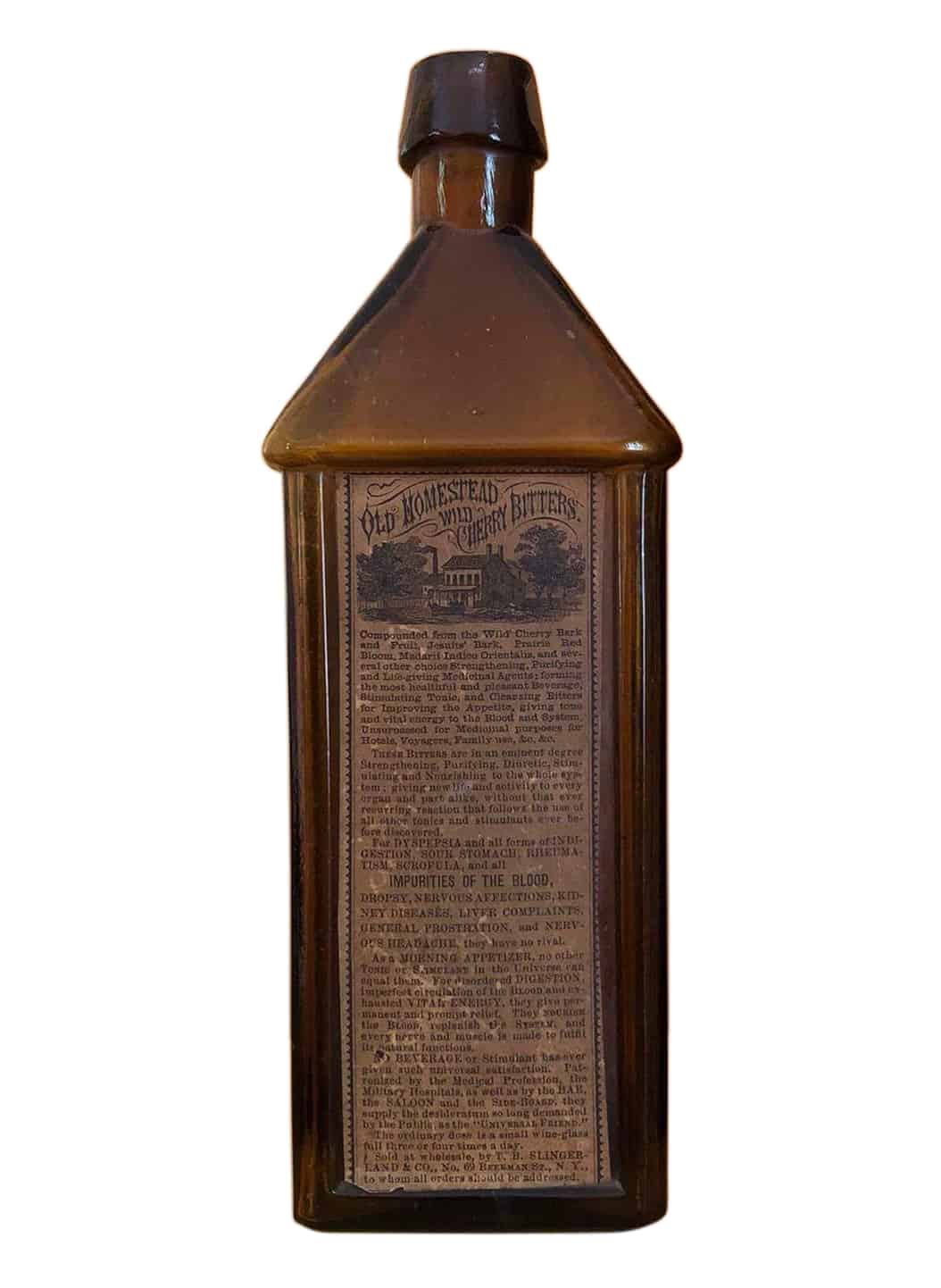 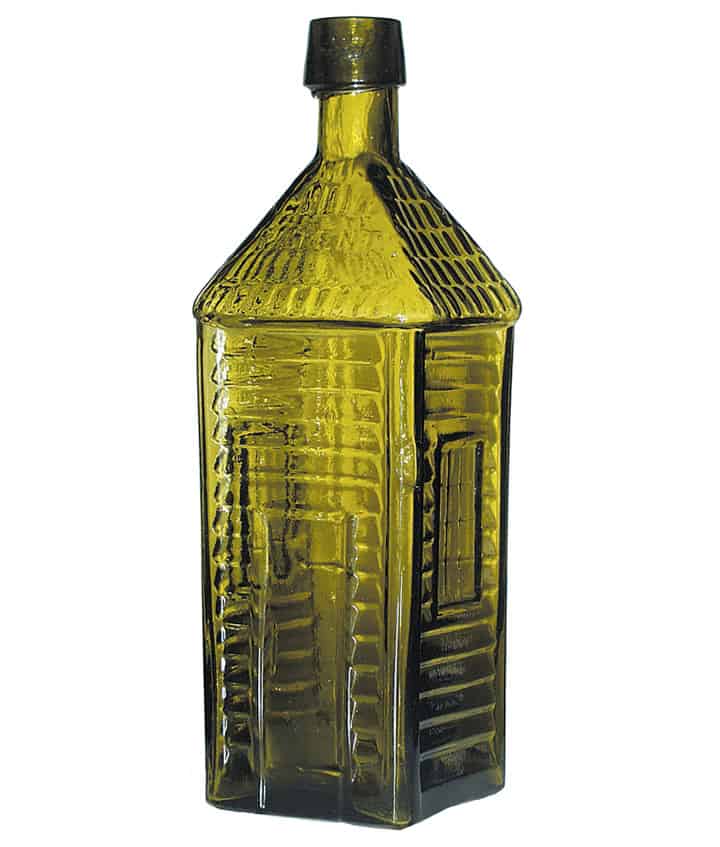 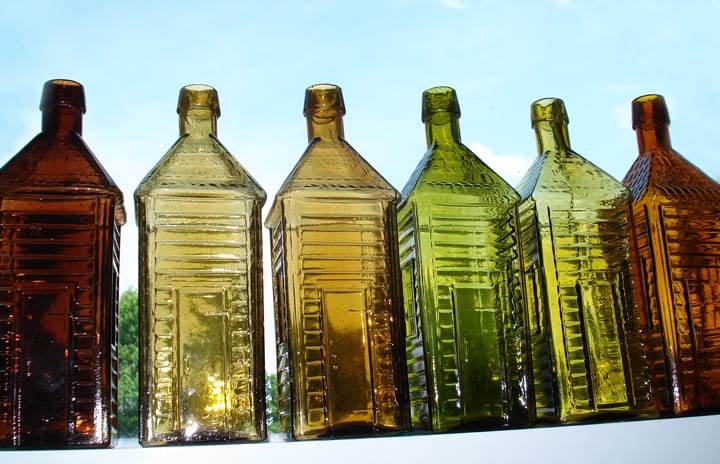 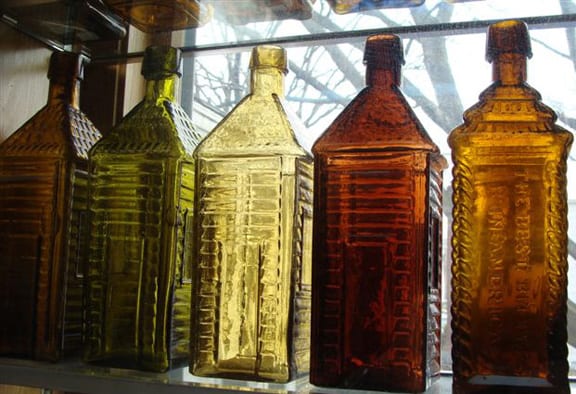 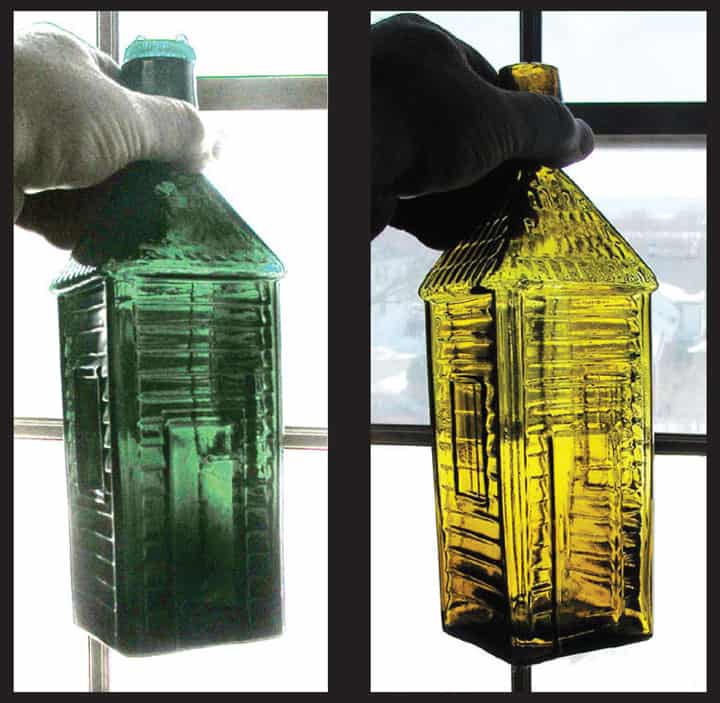 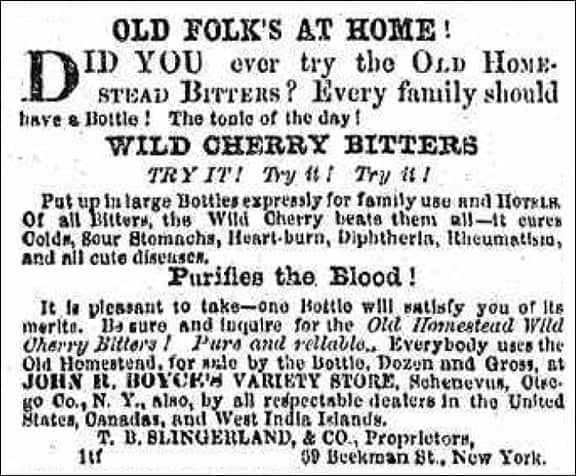 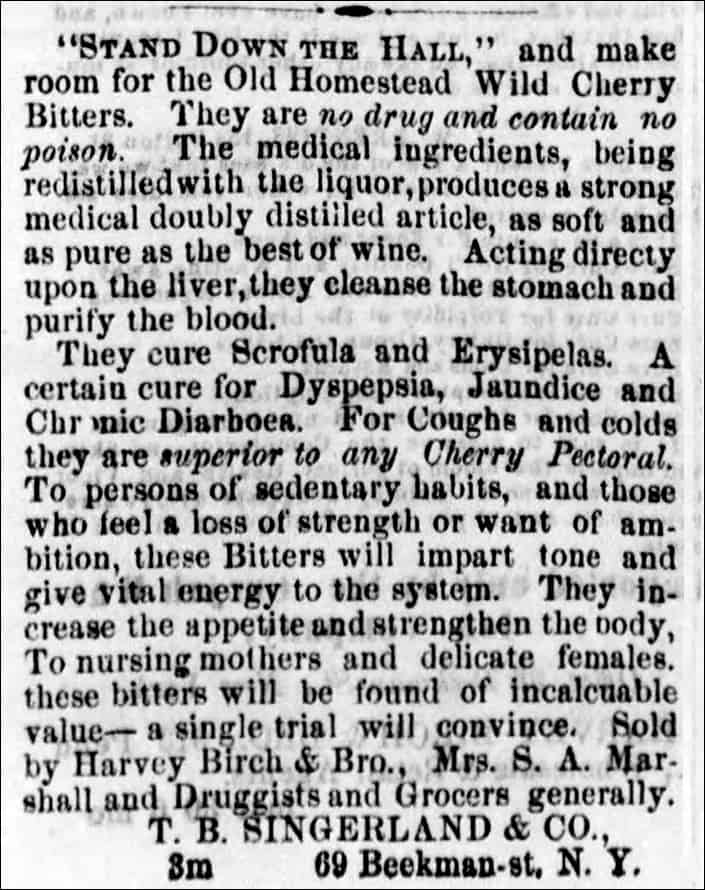 Ex: Action by the plaintiff to recover for labor and services alleged to have been performed for defendant’s testator, at his request, under an employment and in pursuance of a. contract in the manufacture and sale of a compound known as “The Old Homestead Wild Cherry Bitters,” in a peculiarly shaped bottle, for which the plaintif held the patent, which bottle was known as a “cottage bottle.” The referee has found as a fact, viz.: “That there was no contract entered into between George Scott, the plaintiff in this action, and said Thomas B. Slingerland, deceased, as appears in the paper offered and received in evidence, marked Exhibit 2, and that the evidence fails to show that any cause of action stated in the complaint in this action existed in favor of the said plaintiif as against the said defendant.” 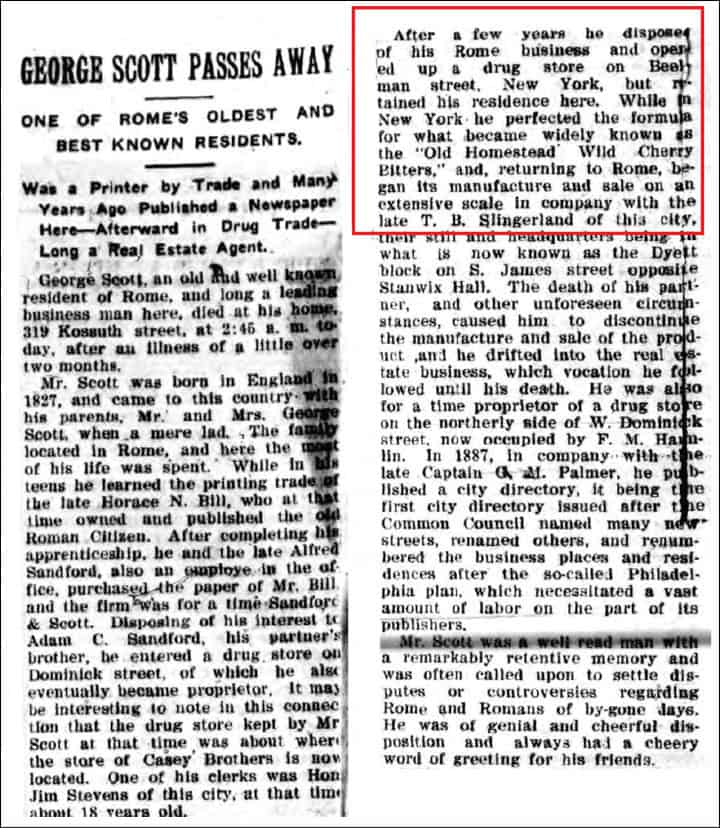