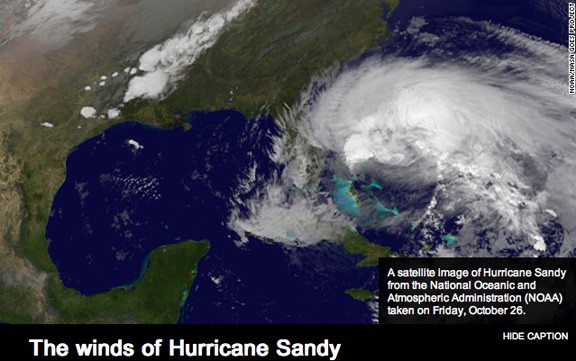 Northeast in crosshairs of ‘superstorm’ Sandy 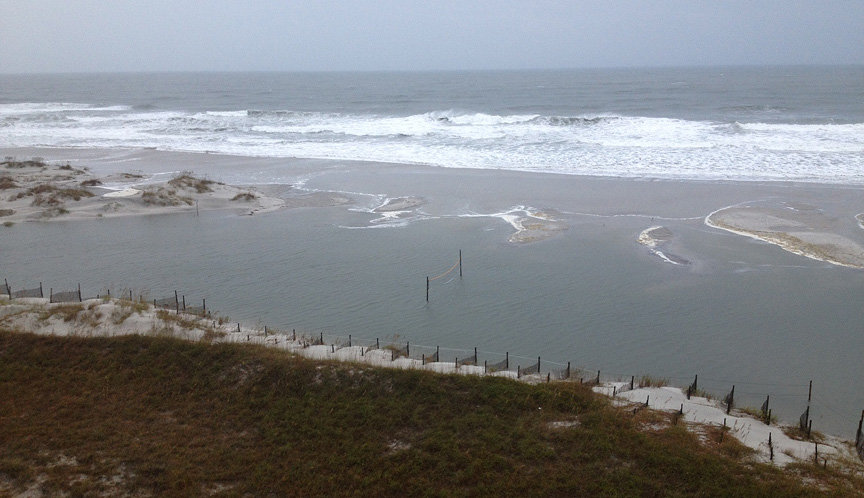 I sit in my room with my grandson Nicolas at a resort on the seventh floor of a beach-front condominium on the outer banks of Wrightsville Beach, North Carolina writing this post. Elizabeth is home with the dogs and horse events. The satellite dish must have blown off the roof so I just switched to my AT&T satellite Internet service. I am here for a beach wedding today (that would have occurred where the volleyball net area is in the picture above) that will be moved inside because of an unvited guest named Sandy. My balcony door overlooking the beach is open. The winds are strong and the waves are crashing loud. 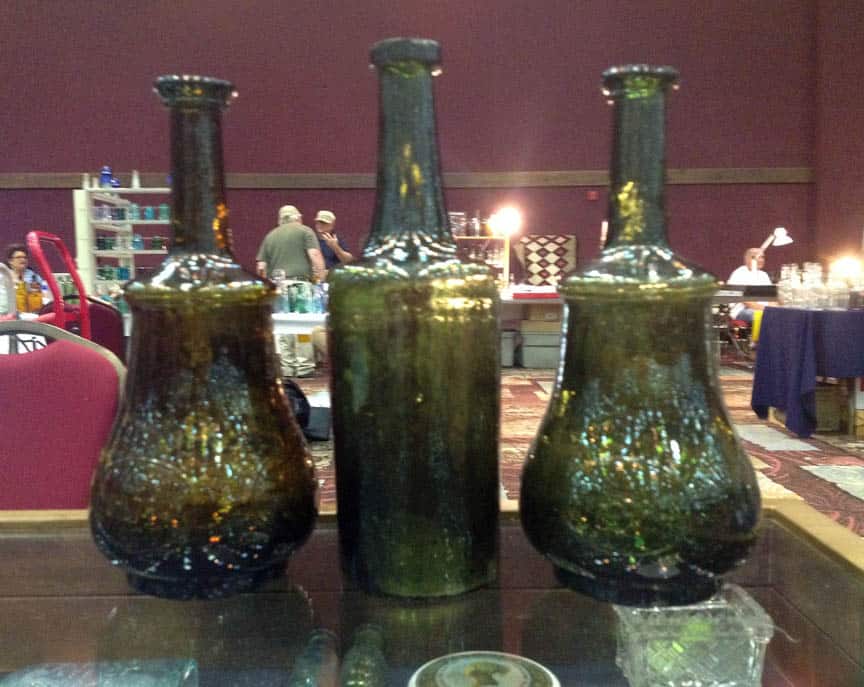 I still have bottles on my mind though and wanted to get some information on the three bottles pictured above. I was asked to photograph the bottles at the Reno Expo. I was led to believe that these were important bottles and a great grouping. They sure looked eastern to me. Why were they at Reno? I have lost my notes and memory for this picture and would like to know more including who owns these bottles so I can give credit. Last night I posted the picture and question to facebook on Early American Glass asking if anyone recognized the bottles? This quickly prompted a response from Michael George and Jeff Noordsy (of course) noting that these were William Daly bottles.

Hopping on the Internet, I was able to pull some more information. If you all can supply more pictures and support information for this post, I will gladly add. From what I found so far, this certainly was a popular New York brand with advertisements in Texas, Louisiana and California. These are sexy, well designed bottles. I also thought it was interesting that one of the cylinder bottles pictured below was found in Lake Tahoe, Nevada. Make sure you read the testimonials. They are outlandish.

By the time of the Civil War, ads in the Galveston Weekly News touted Hostetter’s Stomach Bitters; or Dr. Leroy’s French Specific for All Affections of the Urinary Organs, and those Affections Only; or Daly’s Aromatic Valley Whiskey for Medicinal Purposes; or Brown’s Bronchial Troches; or Sanford’s Family Blood Purifying Pills; or Old Sachem Bitters and Wigwam Tonic. Texans imbibed gallons of the tonics and ate tons of the pills, as ads for these and other nostrums appeared again and again in newspapers throughout the remainder of the nineteenth century. 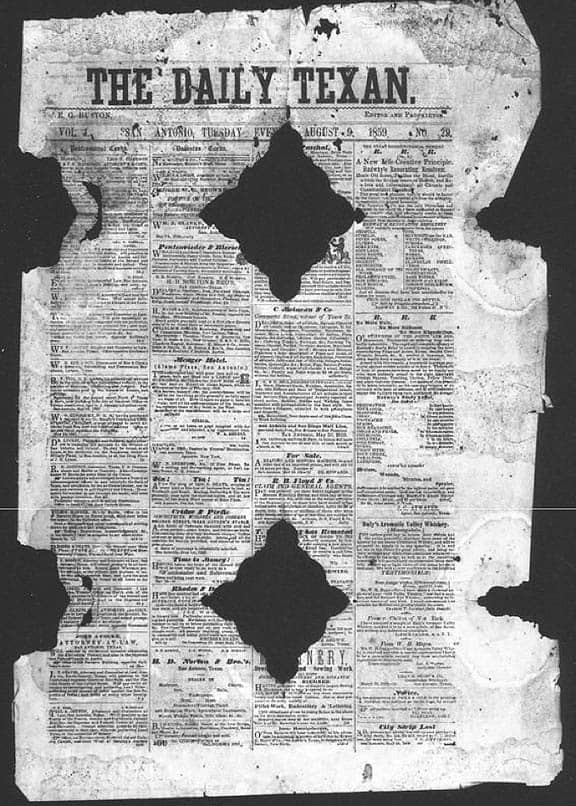 Mr. W. H. Daly – Sir: – I have made a chemical analysis of your “Old Valley Whiskey”, and find it pure, fine, and full flavored Rye Whiskey, containing no injurious matters of any kind. I would recommend it as suitable for Medicinal and general public purposes. 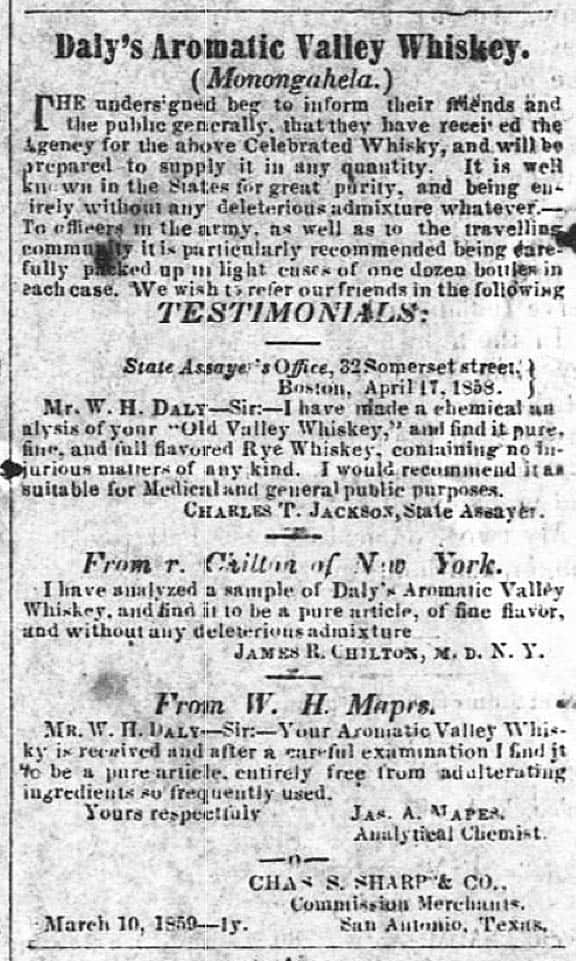 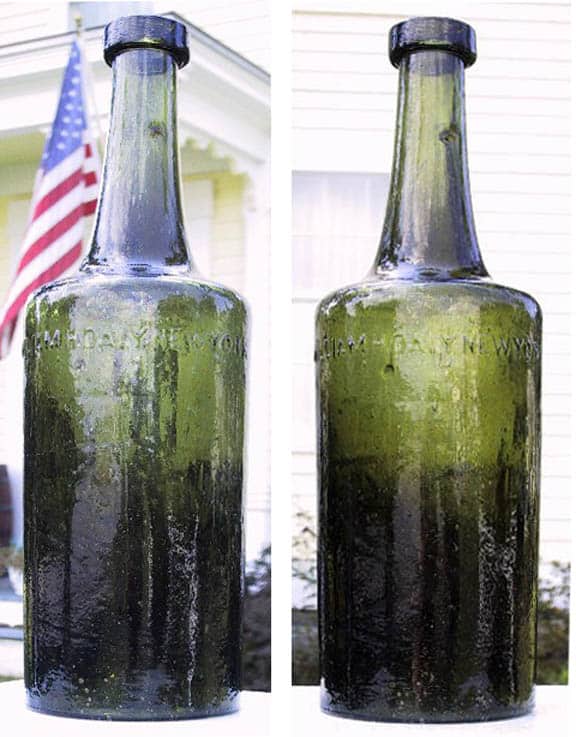 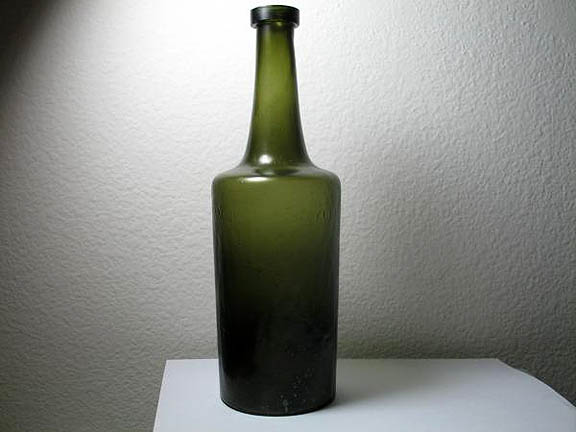 Embossed WILLIAM H. DALY NEW YORK. There is no other text. It has a 2″ x 1/4″ embossed rectangle on text line before the William H Daley New York text. I’ve seen an similar looking bottle on eBay but the text read JOHN T. AND WILLIAM H. DALY NEW YORK. Mine does not have (John T. and). It only says William H Daley New York on it. Found in Lake Tahoe, Nevada – Instappraisal 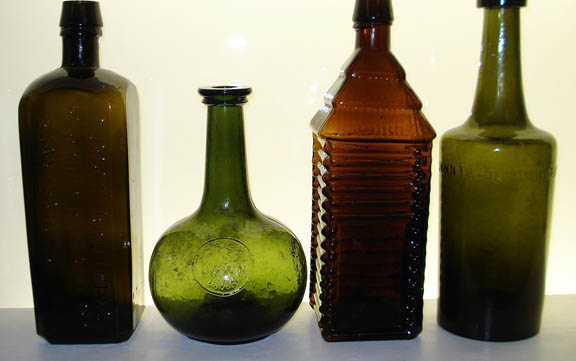 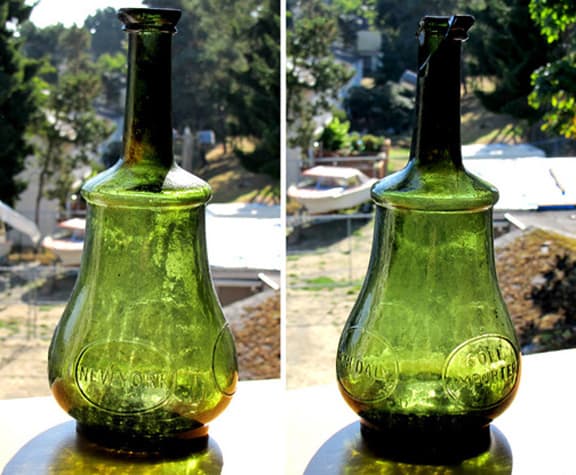 Picture sent to me by Brian Wolff. Brian said he found on antique-bottles.net 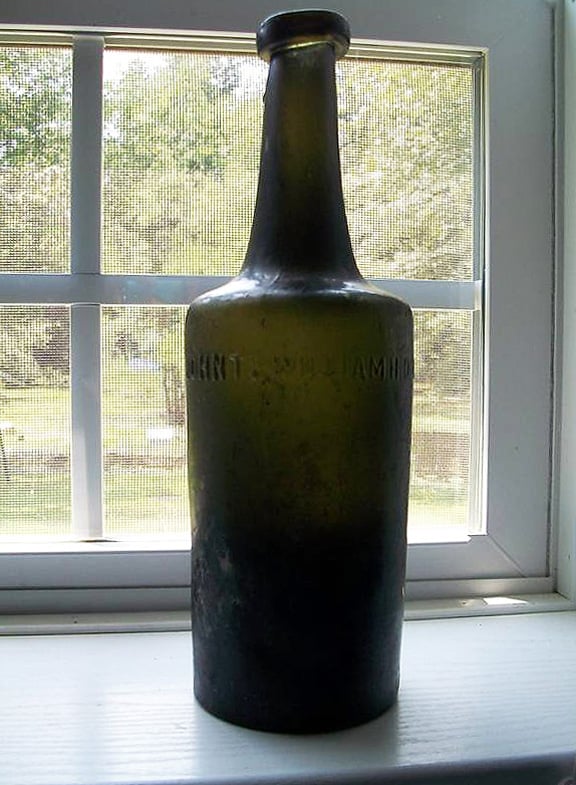 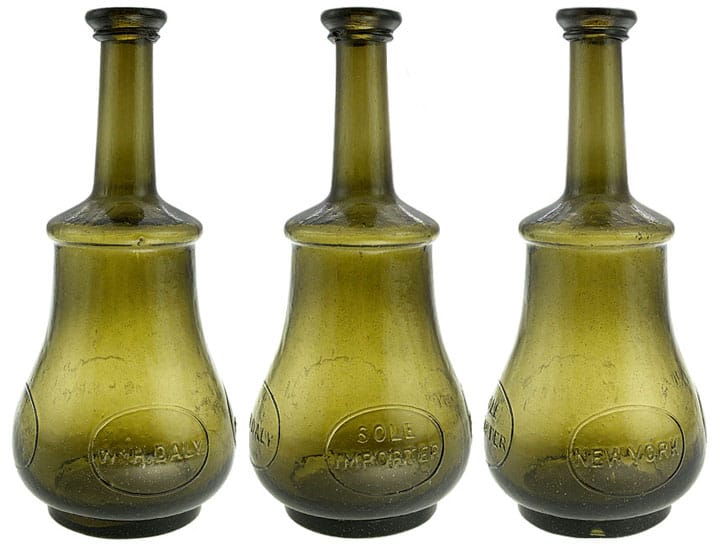 Ferdinand Meyer V is a native of Baltimore, Maryland and has a BFA in Fine Art and Graphic Design from the Kansas City Art Institute and School of Design. Ferdinand is the founding Principal of FMG Design, a nationally recognized design consultation firm. Ferdinand is a passionate collector of American historical glass specializing in bitters bottles, color runs and related classic figural bottles. He is married to Elizabeth Jane Meyer and lives in Houston, Texas with their daughter and three wonderful grandchildren. The Meyers are also very involved in Quarter Horses, antiques and early United States postage stamps. Ferdinand is the past 6-year President of the Federation of Historical Bottle Collectors and is one of the founding members of the FOHBC Virtual Museum.
View all posts by Ferdinand Meyer V →
This entry was posted in Bottle Shows, Early American Glass, History, Medicines & Cures, News, Questions, Spirits, Whiskey and tagged Aromatic, Brian Wolff, california, Daly's, Hurricane, Jeff Noordsy, Louisiana, Michael George, New York, North Carolina, Sandy, texas, Valley, weather, Whiskey, whisky, Wrightsville Beach. Bookmark the permalink.