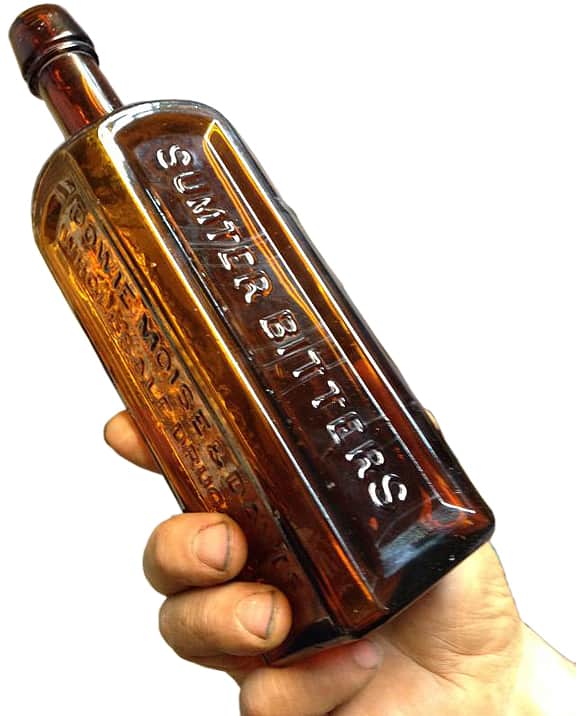 Where the American Civil War Began

Decades of growing strife between North and South erupted in civil war on April 12, 1861, when Confederate artillery opened fire on this Federal fort in Charleston Harbor. Fort Sumter surrendered 34 hours later. Union forces would try for nearly four years to take it back. 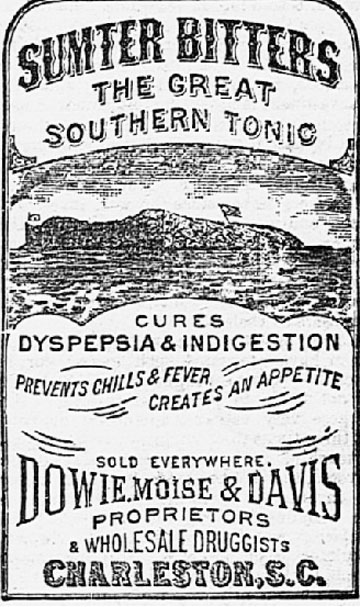 We now find ourselves with a new dug, extremely rare, Sumter Bitters example from Charleston. “The lone survivor, from a crazy pile of crushed Old Carolina’s and Sumters that literally measured up to my knee. It has issues. Missing rear corner and an interior ice pick bruise from opening. There were also 3 Old Carolinas with lip issues”. – Phil Edmunds

“If you look at the advertisment I sent, which is now on your site, it’s interesting to note, that Ft. Sumter is what it looked like after the War. I went there expecting to see a structure like the pictures you posted. It was humbling to see it was reduced to a pile of rubble” 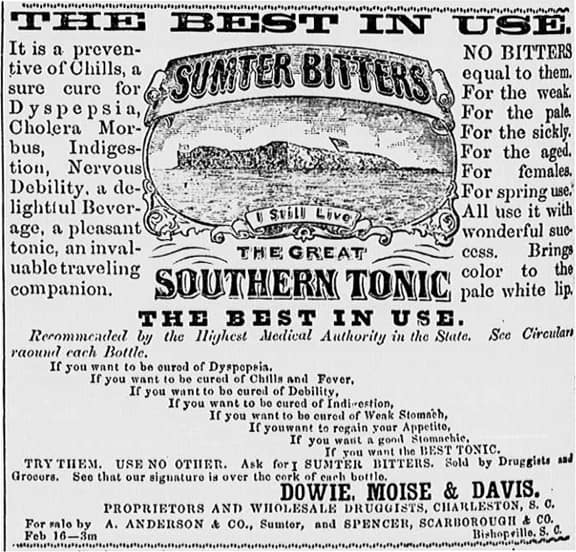 The Carlyn Ring and W.C. Ham listing in Bitters Bottles: 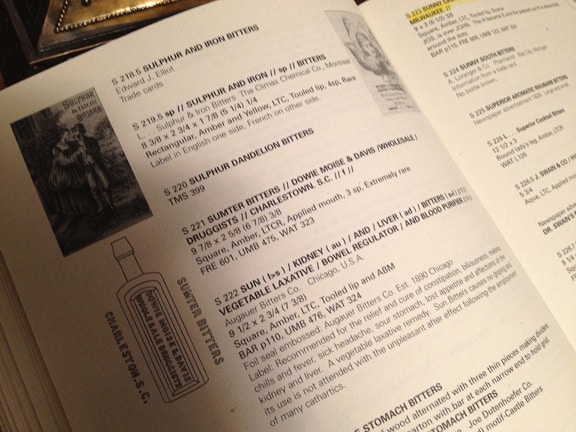 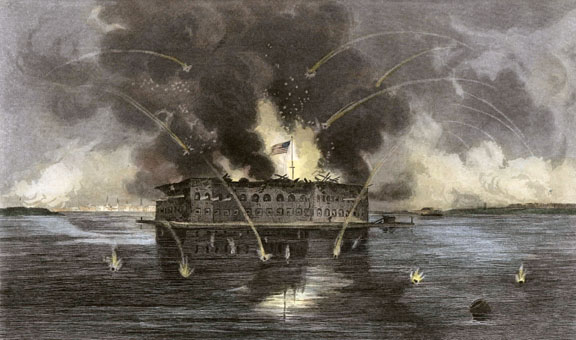 Fort Sumter is a Third System masonry coastal fortification located in Charleston Harbor, South Carolina. The fort is best known as the site upon which the shots initiating the American Civil War were fired, at the Battle of Fort Sumter.

The Fort Sumter Flag is a historic United States flag with a distinctive, diamond-shaped pattern of 33 stars. The flag was lowered by Major Robert Anderson on April 14, 1861 when he surrendered Fort Sumter, in the harbor of Charleston, South Carolina, at the outset of the American Civil War. 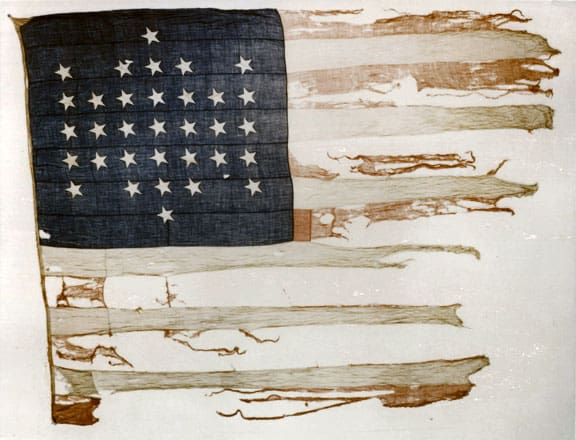 The original flag is still on display at Fort Sumter in a museum maintained by the National Park Service. Commercial replicas of the flag are widely available.

Anderson brought the flag to New York City for an April 20, 1861 patriotic rally, where it was flown from the equestrian statue of George Washington. More than 100,000 people thronged Manhattan’s Union Square in what was, by some accounts, the largest public gathering in the country up to that time. The flag was then taken from town to town, city to city throughout the North, where it was frequently “auctioned” to raise funds for the war effort. Any patriotic citizen who won the flag at auction was expected to immediately donate it back to the nation, and it would promptly be taken to the next rally to repeat its fundraising magic. The flag was a widely-known patriotic symbol for the North during the war.

Any patriotic citizen who won the flag at auction was expected to immediately donate it back to the nation, and it would promptly be taken to the next rally to repeat its fundraising magic.

On April 14, 1865, four years to the day after the surrender and as part of a celebration of the Union victory, Anderson (by then a major general), raised the flag in triumph over the battered remains of the fort.

The Rev. Henry Ward Beecher was the principal orator at the 1865 celebration, and gave a lengthy speech, as was the custom of the day. He said: ” On this solemn and joyful day, we again lift to the breeze our fathers’ flag, now, again, the banner of the United States, with the fervent prayer that God would crown it with honor, protect it from treason, and send it down to our children…. Terrible in battle, may it be beneficent in peace [and] as long as the sun endures, or the stars, may it wave over a nation neither enslaved nor enslaving…. We lift up our banner, and dedicate it to peace, Union, and liberty, now and forevermore.” – Rev. Henry Ward Beecher

“We lift up our banner, and dedicate it to peace, Union, and liberty, now and forevermore.”

Coincidentally, later that night President Lincoln would be shot at Ford’s Theatre. 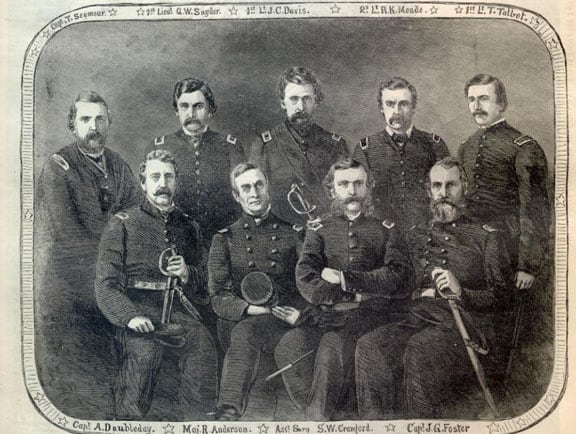 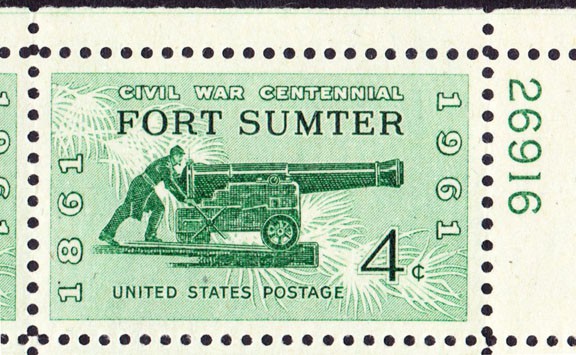 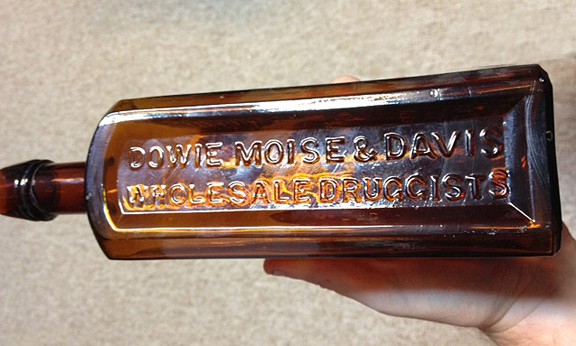 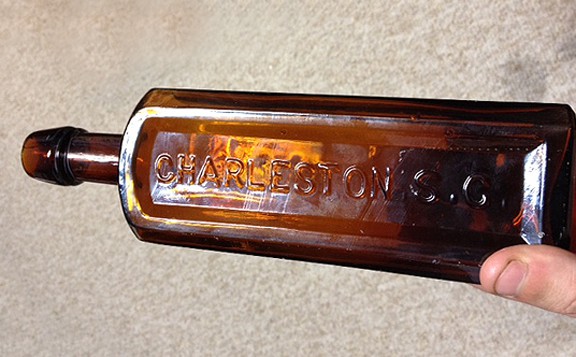 Ferdinand Meyer V is a native of Baltimore, Maryland and has a BFA in Fine Art and Graphic Design from the Kansas City Art Institute and School of Design. Ferdinand is the founding Principal of FMG Design, a nationally recognized design consultation firm. Ferdinand is a passionate collector of American historical glass specializing in bitters bottles, color runs and related classic figural bottles. He is married to Elizabeth Jane Meyer and lives in Houston, Texas with their daughter and three wonderful grandchildren. The Meyers are also very involved in Quarter Horses, antiques and early United States postage stamps. Ferdinand is the past 6-year President of the Federation of Historical Bottle Collectors and is one of the founding members of the FOHBC Virtual Museum.
View all posts by Ferdinand Meyer V →
This entry was posted in Bitters, Civil War, Digging and Finding, Druggist & Drugstore, History, News and tagged bitters, centennial, Charleston, Civil War, Confederate, Davis, Dowie, Druggists, flag, Fort Sumpter, Henry Ward Beecher, Lincoln, Major Robert Anderson, Moise, Old Carolina, Phil Edmunds, President, Southern, Tom Leveille, Tonic, wholesale. Bookmark the permalink.