A Stunning Pen of Pigs from Glass Works Auctions and Elsewhere 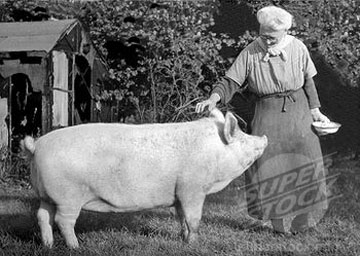 Who doesn’t Love a Pig?

A Stunning Pen of Pigs from Glass Works Auctions and Elsewhere

Glass Works Auctions in East Greenville, PA has a stunning group of pigs, primarily Anna Pottery, in their current Auction 94 called the “Ides of March” Auction. Five (5) of the pigs are pictured below along with other pigs that have caught my attention. 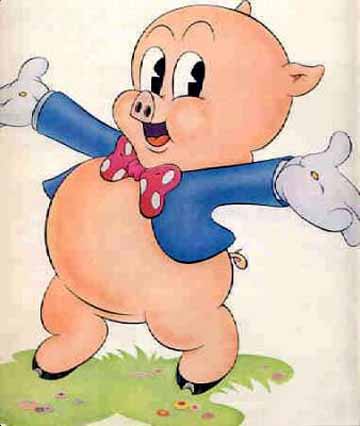 Elizabeth, my wife, loves these pigs and says these are her favorite figural bottle. We actually own three (3) REAL snorting pigs, or more correctly, my granddaughter Adriana does. This is thru a FFA affiliation. I suppose Porky Pig has a lot to do with all this. 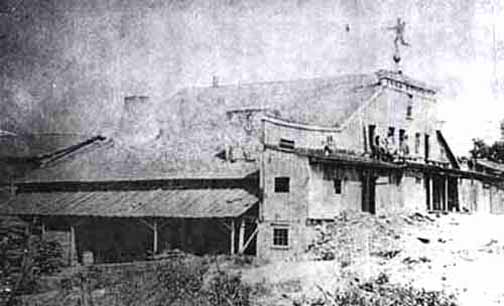 [From AnnaPottery.com] Anna Pottery boasted the finest examples of nineteenth century folk art which was the creations of the brothers Cornwall and Wallace Kirkpatrick. These unique pieces of pottery were the “messengers” from with their opinions on Politics, Corrupt Tax Revenuers, the Temperance Movement, and many other socially engaging topics were conveyed.

This unique pottery was hand crafted in Anna, Illinois from 1859 to 1896 featuring presentation pig flasks, snake jugs, frog mugs and many other unique items that were presented to people of prominence such as City Officials, Dean’s of Universities, Governors and the Smithsonian Institute. 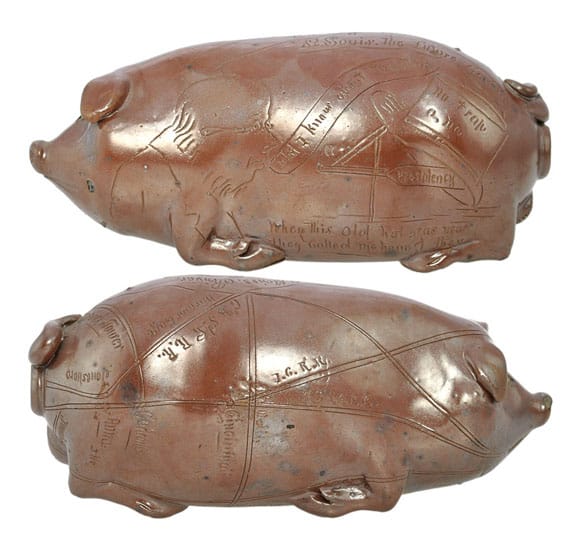 Glass Works Auction 94: Anna Pottery Whiskey Pig, Anna Pottery, ca. 1872, brown Albany type glaze, anatomically correct male pig. Incised on one side a likeness of Horace Greeley and the words ‘What I Know About Trapping’ in a word banner. The words ‘No Trap O No’ are on the side of a rabbit trap appearing as a large brim hat. Inside the hat on a paddle is the word ‘Presidency’ which is the bait. Below the trap is ‘When This Old Hat Was New(e)r They Called Me Honest Then’ . On the back is ‘Miss. River’ and ‘St. Louis the Future Capital’. On the other side are the rail lines ‘C.B.I.C.R.R.’, ‘I.C.R.R.’, and ‘C & St. L. R.R. Narrow Gauge’, also a number of towns including, ‘Mounds’, ‘Louisville’, ‘Grand Tower’, Jonesboro’, ‘Junction’, ‘Anna’, Carbondale’, ‘Cincinnati’, ‘Odin’, and ‘Vincins’. On its belly is ‘Ohio River Cincinnati the Porkopolis’ and on its chin ‘Chicago the Corn Crib’ 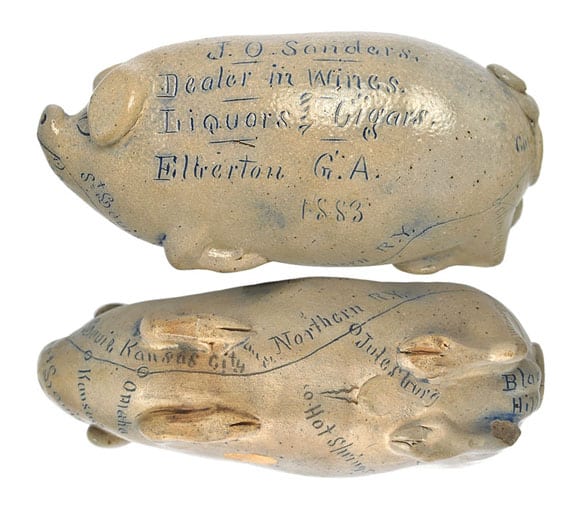 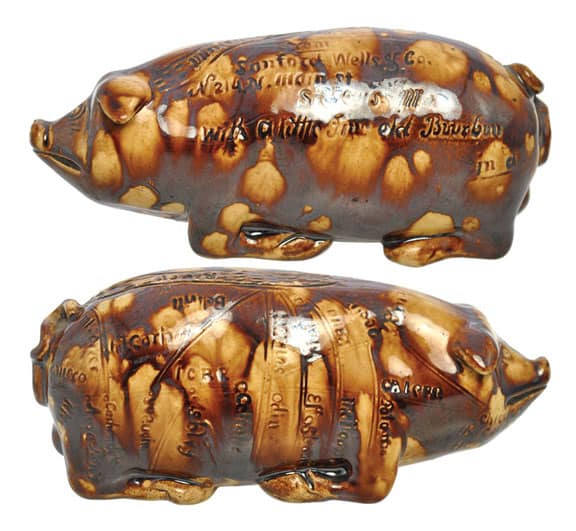 Glass Works Auction 94: Anna Pottery Whiskey Pig, Anna Pottery, ca. 1870 – 1874, tan pottery with Bennington type glaze anatomically correct male pig. One side is incised ‘From / Sanford Wells & Co. / N 214 N. Main St. / St. Louis Mo. / With a Little Fine Old Bourbon in a’, with the ‘Mississippi River’ running down the back. On the other side is a number of towns and railroad lines including, ‘Cairo’, ‘Mounds’, ‘Mounds Tower’, ‘Anna Pottery’, Jones(boro)’, ‘Carbondale’, ‘DuQuoin’, ‘Ashley’, ‘Centralia’, ‘Odin’, ‘Effingham’, ‘Mattoon’, ‘Tolono’, ‘Vandalia’, ‘Pana’, among others. On its belly is the ‘Ohio River’ and ‘Cincinnati the Ancient Porkopolis of America’ and on its chin ‘Chicago the Corn City of the World’ 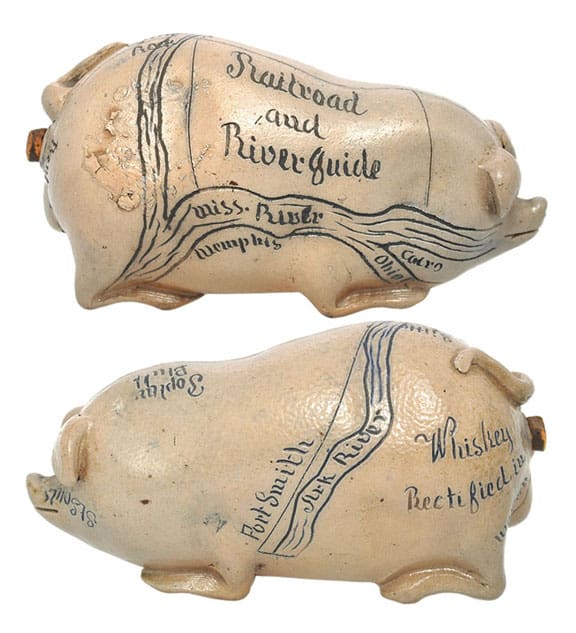 Glass Works Auction 94: Texarkana Saltglazed Pottery Whiskey Pig, Texarkana Pottery, Texarkana, Texas/Arkansas, ca. 1880 – 1885, gray pottery with cobalt blue highlighted wording, anatomically correct male pig. Incised on one side ‘Railroad and River Guide’ above the ‘Miss(assippi)’ and ‘Ohio Rivers’ and the towns of ‘Memphis’ and ‘Cairo’. On the other side is the ‘Ark(ansas) River’ and the towns of ‘Poplar Bluff’, ‘Fort Smith’, and ‘Little Rock’. On the pigs rear end at the opening is ‘Benton’ and ‘Malvern’ and ‘Whiskey Rectified in’. On its face is ‘St. Louis’, and on its belly is ‘Hot Springs’ 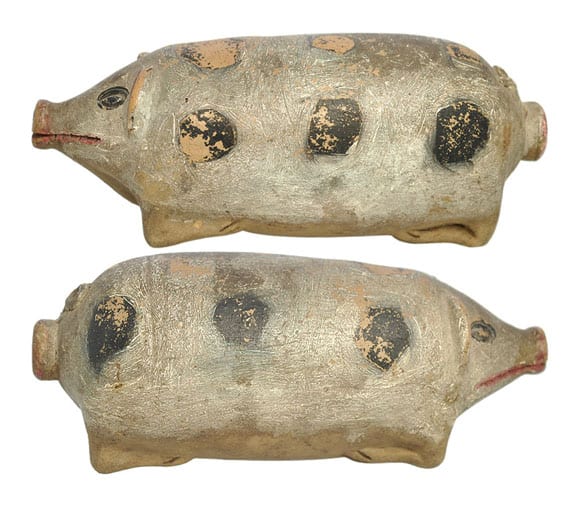 Glass Works Auction 94: Pottery Whiskey Pig, unknown pottery, ca. 1885 – 1895, gray pottery with red paint on the ears, mouth and snout, black spots are across the back and on the eyes. 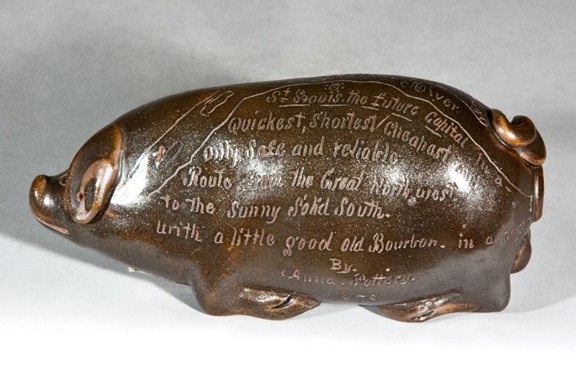 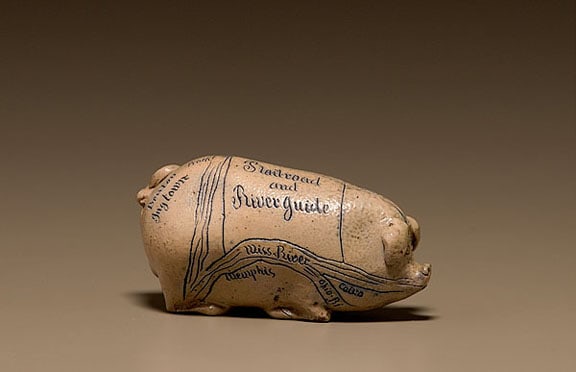 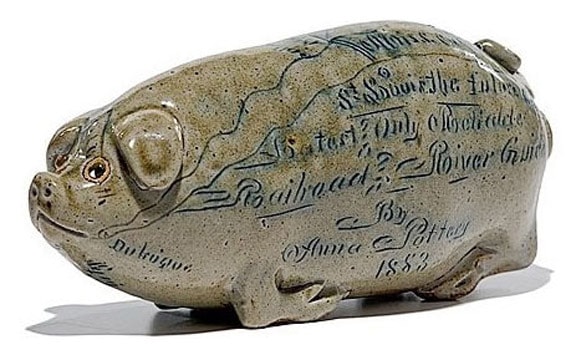 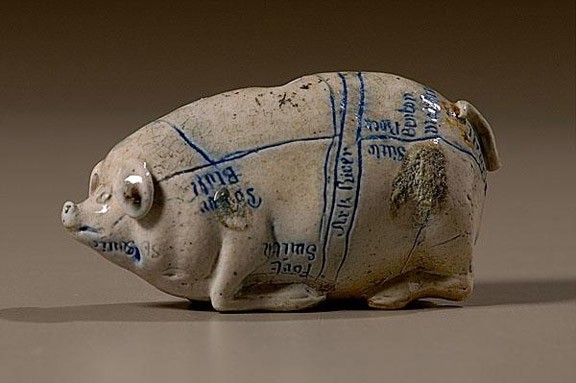 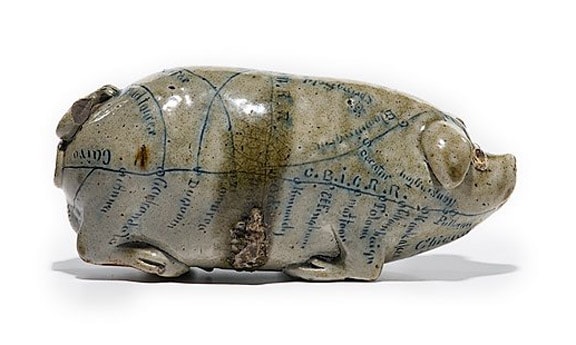 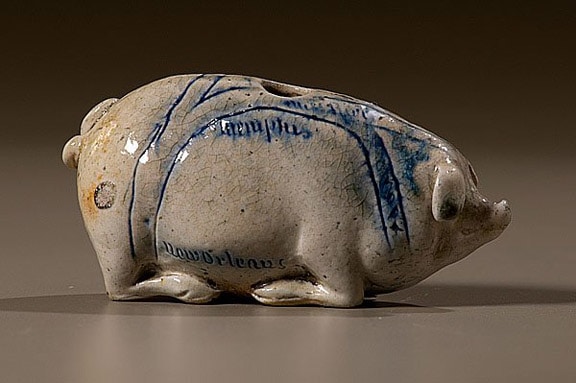 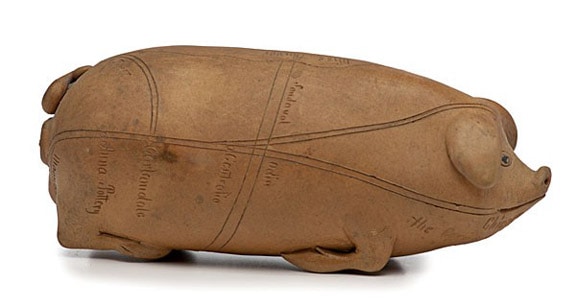 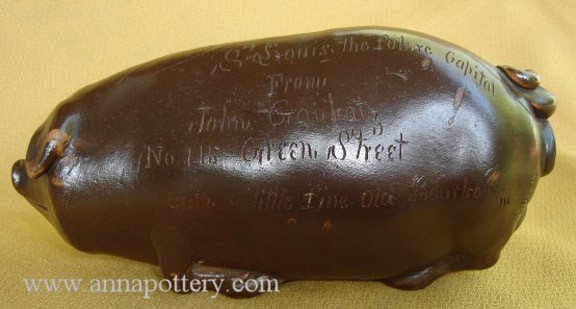 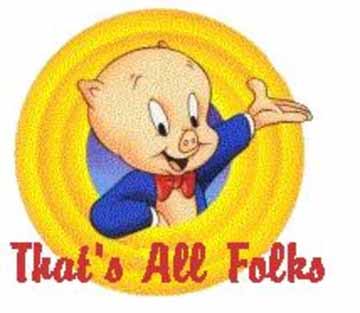 Ferdinand Meyer V is a native of Baltimore, Maryland and has a BFA in Fine Art and Graphic Design from the Kansas City Art Institute and School of Design. Ferdinand is the founding Principal of FMG Design, a nationally recognized design consultation firm. Ferdinand is a passionate collector of American historical glass specializing in bitters bottles, color runs and related classic figural bottles. He is married to Elizabeth Jane Meyer and lives in Houston, Texas with their daughter and three wonderful grandchildren. The Meyers are also very involved in Quarter Horses, antiques and early United States postage stamps. Ferdinand is the past 6-year President of the Federation of Historical Bottle Collectors and is one of the founding members of the FOHBC Virtual Museum.
View all posts by Ferdinand Meyer V →
This entry was posted in Figural Bottles, Glass Makers, History, Pottery and tagged Anna, Anna Pottery, Cornwall Kirkpatrick, Glass Works Auctions, illinois, Pigs, Railroad, salt glazed, Wallace Kirkpatrick. Bookmark the permalink.