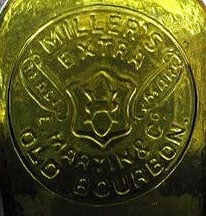 While hunting for Continental Whisky (note alternate spelling of whiskey) information online I came across some some wonderful pictures of MILLER’S EXTRA OLD BOURBON flasks and cylinders. I have to admit, I really do not know much about the bottle other than reading periodic posts on Western Glob Top Whiskies and seeing them show up at American Bottle Auctions. I’ve seen them before within collections but must have been distracted by other bottles to focus on the Millers Extra.

These are fascinating bottles to me looking inwards as they come in a flask and cylinder shape, the color range is wide, the typographic embossing is great, the crudity and the circle size. What a combination.

This is an applied top bottle related to the Cutter line. It is usually found in a light shade of amber with some examples having a slight green tone. Broken Miller’s fifths along with the flasks have been found in ghost towns near Bishop (Cerro Gordo, Queens Canyon, etc.) and Lone Pine, California. Pieces of a fifth, and whole and broken flasks were found in the Oquirrh Mountains west of Salt Lake City. Two of the whole Miller’s fifths were found along the Oregon coast.

Miller’s Extra was a familiar name to the early western miner, and it stood for good drinking whiskey. The containers it came in have turned up in great numbers in early mining camps of the West. Edward Martin and Daniel Henarie, partners under the firm name of E. Martin & Co. petioned the U.S. Patent Office March 28, 1871, to register the record the Miller’s embossing pattern. They claimed to have begun using this mark on their packages as early as September 1869 in San Francisco.

In 1969, there were about a hundred and fifty of these flasks in western collections. 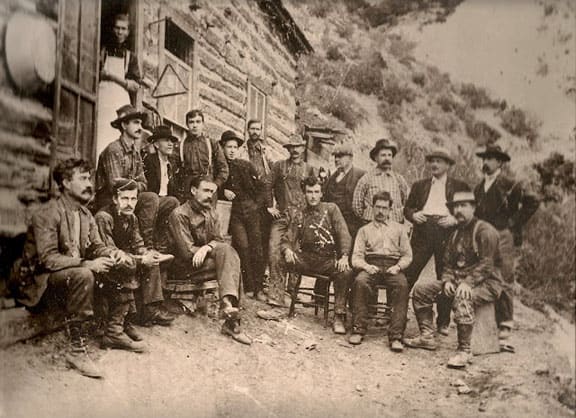 This is the much rarer flask than the Miller’s with the large embossing pattern. In 1969 there were five or so in western collections. 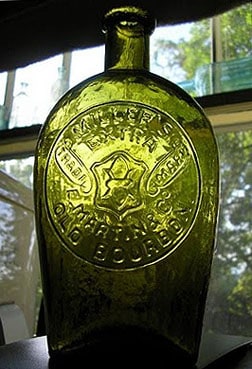 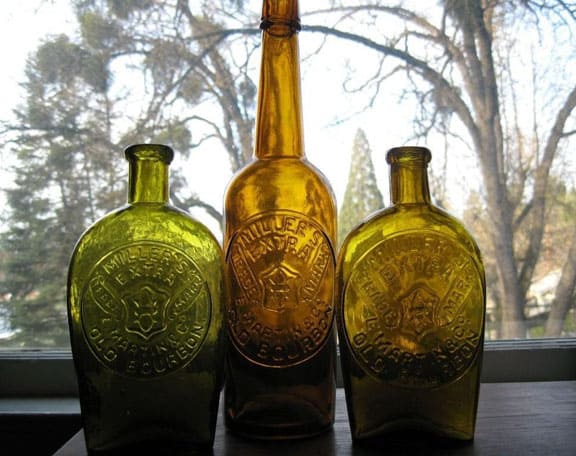 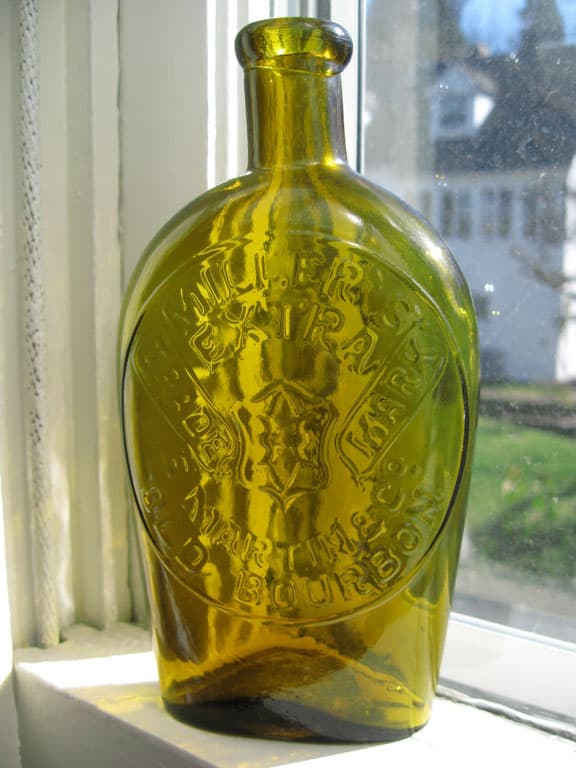 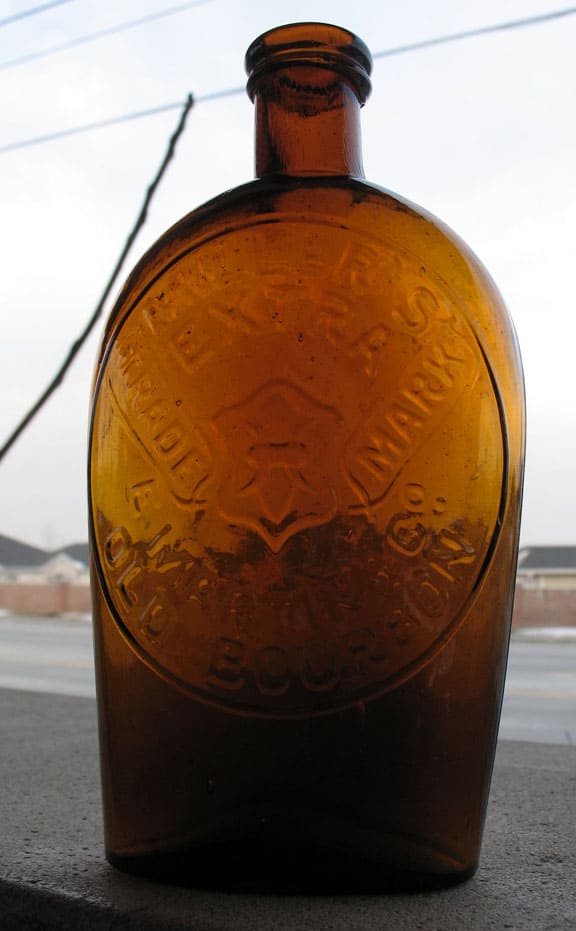 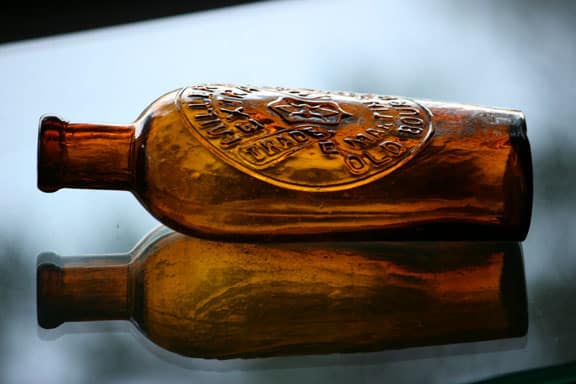 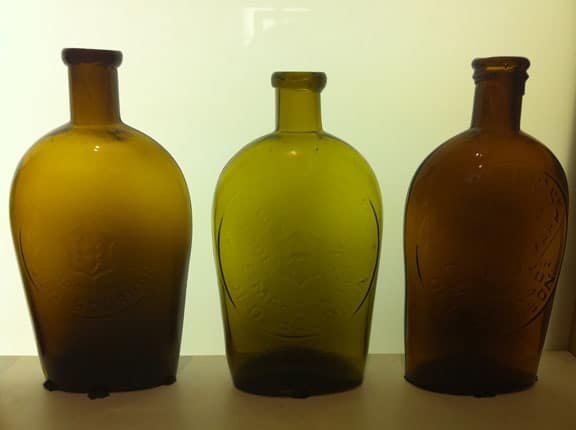 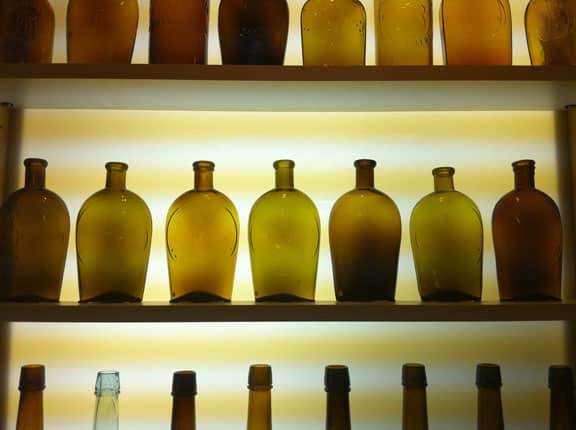 Ferdinand Meyer V is a native of Baltimore, Maryland and has a BFA in Fine Art and Graphic Design from the Kansas City Art Institute and School of Design. Ferdinand is the founding Principal of FMG Design, a nationally recognized design consultation firm. Ferdinand is a passionate collector of American historical glass specializing in bitters bottles, color runs and related classic figural bottles. He is married to Elizabeth Jane Meyer and lives in Houston, Texas with their daughter and three wonderful grandchildren. The Meyers are also very involved in Quarter Horses, antiques and early United States postage stamps. Ferdinand is the past 6-year President of the Federation of Historical Bottle Collectors and is one of the founding members of the FOHBC Virtual Museum.
View all posts by Ferdinand Meyer V →
This entry was posted in Bourbon, Flasks, History, Whiskey and tagged Bourbon, Dale Mlasko, E. Martin, John L. Thomas, Miller's Extra, old bourbon, San Francisco, Trade Mark, Western Glob Top Whiskies, Whiskey, Whiskey Bottles of the Old West. Bookmark the permalink.