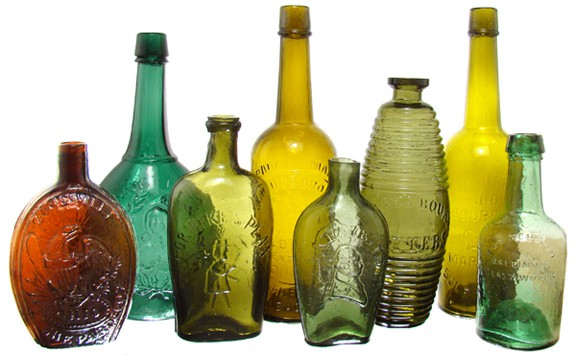 A quick review of Jeff Wichmann’s American Bottle Auctions | Auction 54 (now online for bidding) reveals two (2) nice Bitters squares. There are actually quite a few Bitters in the auction that are rather nice. I just love squares. The Auction runs thru Sunday, 18 December 2011.

Lot 28 NATIVE AMERICAN STOMACH BITTERS WESTHEIMER BROTHERS ST JOSEPH MO MANUFACTURERS & PROPRIETORS. 1871-77 Applied top, 9 ¼”. When we presented the last example of this bottle in our previous sale, we claimed that it was either possibly one known or maybe one of two. Of course, two months later, we find out about this bottle, it being sold on Ebay. What we did not know and most likely anyone else bidding on it, was that it is an earlier variant with the name “Westheimer Brothers” instead of “Samuel Westheimer.” This is indeed very important, as Ferdinand left the company in 1877, please click on our bottle link to view more information. So we have a definite six-year window of when this bottle could have been made. Once again we will say that this bottle may be unique, it is unlisted and provides us with a great deal of history. Found under a house in Bridgeton, CO by an elderly lady who provided the pictures of the bottle, exactly as it was pulled out from under her home. Grades a 9.8 simply cleaned up with soap and water. 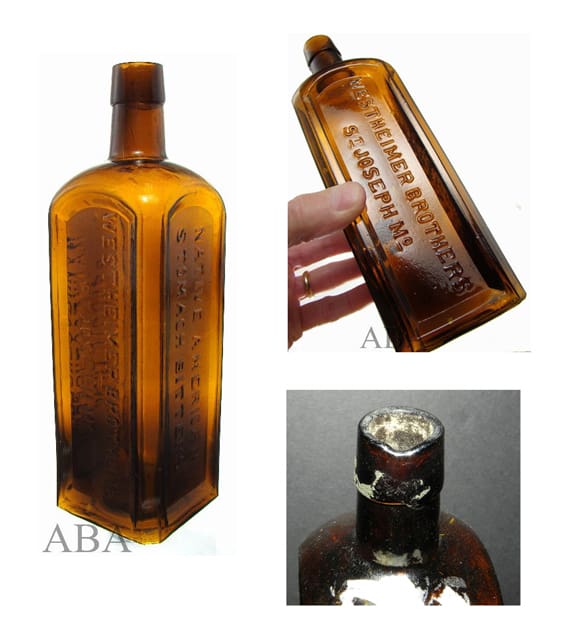 Lot 37 CUNDURANGO1872-80. Applied top. 9 1/18”. 1872-80. These interesting bitters were a product of The G.W. Chesley Company and were distributed throughout the state and into Nevada. It seemed like there were plenty of these interesting bottles to go around but as times move on we see less and less of them. Chesley was also responsible for the Jockey Club whiskey in this sale, lot 53. This example is tobacco amber and is in super condition. A bath of muriatic acid and water was all that was needed to make this as presentable as it is. No nicks, dings, in fact we’re seeing only one light scratch on the left side. Generally a Grade 9.7 bottle, here’s one for the western bitters collector as well as the western bottle collector in general. 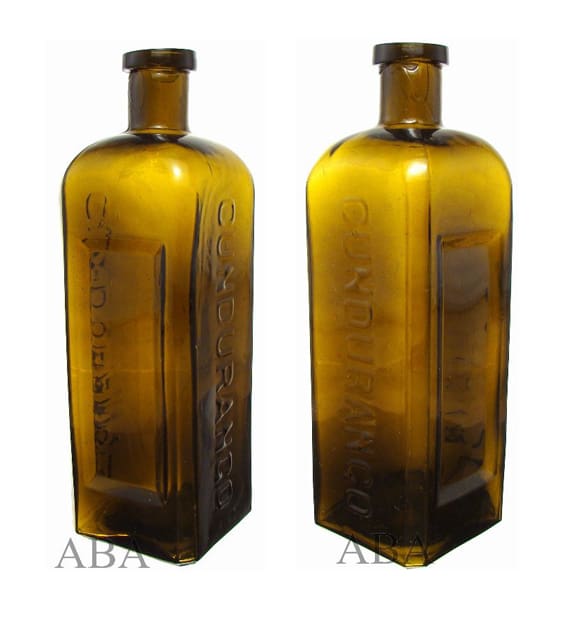 Ferdinand Meyer V is a native of Baltimore, Maryland and has a BFA in Fine Art and Graphic Design from the Kansas City Art Institute and School of Design. Ferdinand is the founding Principal of FMG Design, a nationally recognized design consultation firm. Ferdinand is a passionate collector of American historical glass specializing in bitters bottles, color runs and related classic figural bottles. He is married to Elizabeth Jane Meyer and lives in Houston, Texas with their daughter and three wonderful grandchildren. The Meyers are also very involved in Quarter Horses, antiques and early United States postage stamps. Ferdinand is the past 6-year President of the Federation of Historical Bottle Collectors and is one of the founding members of the FOHBC Virtual Museum.
View all posts by Ferdinand Meyer V →
This entry was posted in Auction News, Bitters, News and tagged American Bottle Auctions, bitters, Cundurango, Jeff Wichmann, Native American Stomach Bitters, squares. Bookmark the permalink.