This is my second post reviewing the American Bottle Auctions | Auction 54 which ends this Sunday evening, 18 December 2011. 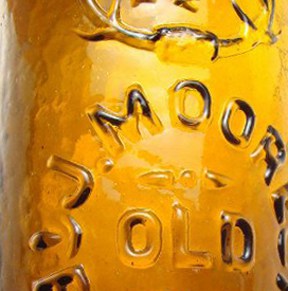 Not to long ago, Jeff Wichmann sent me some jpegs of some new experimental photography and asked me what I thought. I honestly responded that I could not see any difference or improvement since I had always admired his photographic skills and felt that his photography was spectacular. I would say he is right up there with the best of the best in bottle photography. I have seen his photo studio and appreciate the length that Jeff will go to capture a bottles essence and character. Coupled with his colorful descriptions and videos of subject auction bottles, I would have to say that Jeff is the leader in Auction cataloguing in our bottle and glass community. That is pretty good when you consider how tough his competition is at the other auction houses.

Anyway, I thought I would repost seven (7) of the cylinders from this auction and focus on the wonderful photography. I have placed the detail picture next to the full bottle picture to show the clarity and detail of the close-up photography.

Lot #51 C.W. STUART’S EXTRA KENTUCKY WHISKY with K in circle on reverse shoulder. Applied top, Thomas-146 1875-83. According to Thomas the F & P.J. Cassin bottle mold was used to make the mold for this bottle. We have however discovered new evidence of it being a re-worked SHM. The indentation on the back of the SHM is more likely as the design fits better. Basically it was filled in with a slug plate. There is no definitive reason for the “K on back shoulder as to who it. Probably Kellogg as he was hardly a stranger to liquor wholesaling. Absolutely loaded with tiny bubbles, it almost has a puce look to it, as the amber is reddish. In addition, it is very heavily whittled and has a very strong strike. Once again, the best known specimen, quite possibly, as we have certainly never seen a better one. Grades a 9.8, there are believed to be less than ten known. Dug by Tony Gospaliditch in either Gold Hill or Virginia City, NV. 1977. Ex Eastley, Mlasko collections. 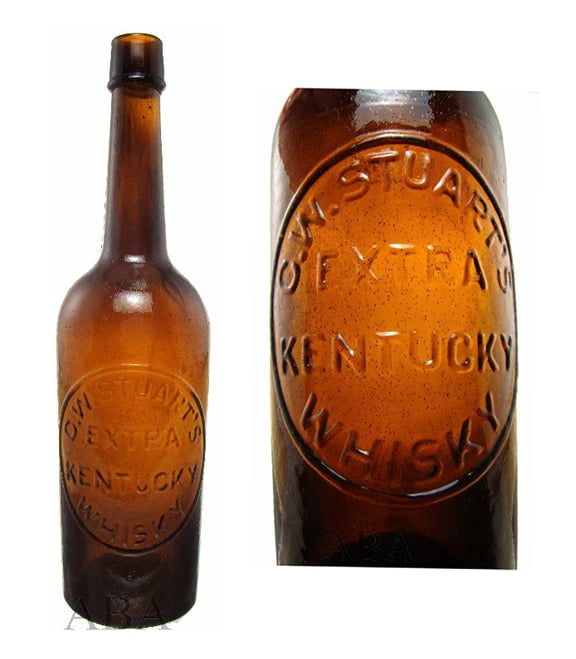 Lot #52 OPS BOURBON WHISKEY FROM AP HOTALING’S OLD PRIVATE STOCK SAN FRANCISCO. Thomas-52, 1879-85. Fifth, applied top. Here is a bottle that is not only a popular one but is almost legendary in its place among western fifths. Anyone who has been remotely associated with collecting western whiskeys, is familiar with John and especially the bible of all western whiskey books, Whiskey Bottles of The Old West. John would talk for hours about various western whiskeys but it always seemed to come back to this particular one. The bottle itself is truly an amazing specimen with unsurpassed whittle, super strike, wonderful color, and perfect condition. In his book Thomas writes, “The best whiskey I ever owned was the O.P.S. that Dennis (Eastley) got from me. I really loved that bottle and wish I still had it.” Although John passed in 2000, his legacy will not be forgotten. This bottle is one that will forever hold special significance for the western fifth collector and collectors in general. Grades a 9.8. Ex-Thomas, Eastley. 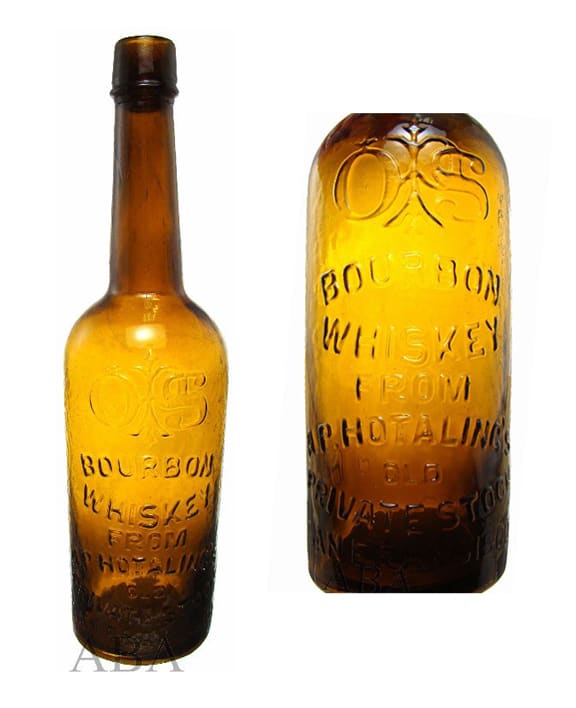 Lot #53 JOCKEY CLUB WHISKEY GW CHESLEY & CO. SF. Thomas-19, 1873-78. These sixth-sized whiskeys are often quite early, as the first western containers were a little smaller than what we are used to today. Most of the Jockey Clubs are amber to orange amber, we’ve also seen the dark almost tobacco but rarely have we seen an example as pristine and beautiful as this. This was dug by Jeff Rosen and Ken Salazar, child actor and fluent in Portuguese, in Oakland, CA in 1975 and was obtained by Mlasko through Dennis Eastley. Once again we raise the question, top specimen? This has loads of bubbles and just a flurry of whittle that when combined with its olive amber hue, provides some real fireworks. Since Dale refused to own anything but the best, we can assure you that this is a bottle he prized quite highly. Never cleaned, there may be a spot or two of very light stain, however it is inconsequential to the overall presentation of this bottle. This is really one for the books. Grades a 9.7. 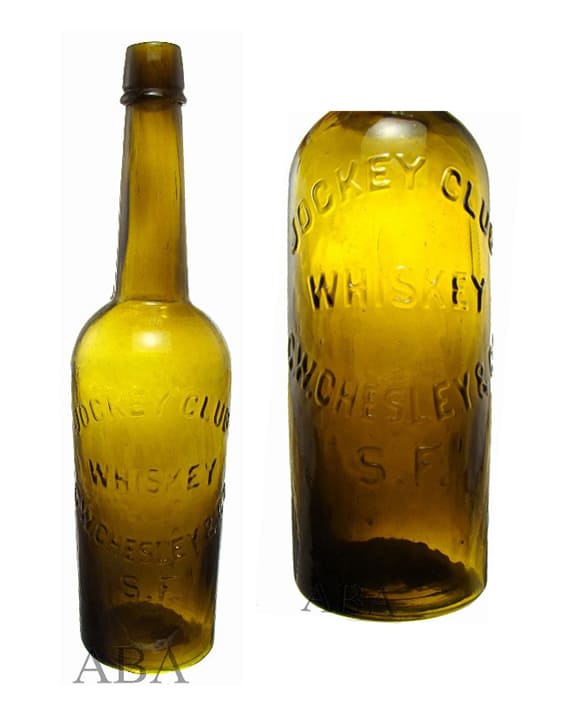 Lot #56 WM. H SPEARS & CO OLD PIONEER WHISKEY FENKHAUSEN & BRAUNSCHWEIGER SOLE AGENTS. SF with embossed WALKING BEAR. Applied top. Thomas-4, 1878-81. Here is a terrific example of the two-name bear and in fact this would certainly qualify as at least one of the top specimens known. Once again we see the Braunschweiger name but the real excitement of this bottle is the overall patina and handsome demeanor of the bottle. Not only is the strike exceptionally strong, but there is whittle and a wonderful variance in hues. Perfectly played out with the central area being a light golden amber. There is a little stain on the back exterior, which we are frankly, happy to see as this bottle has never been cleaned. A classic container, they don’t get much better than this. Ex-M. Boone, Eastley and Mlasko. Grade 9.8. 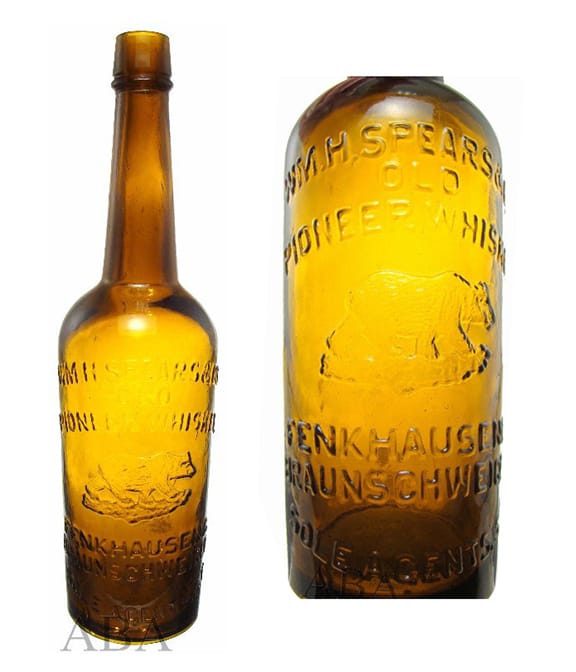 Lot #57 JF CUTTER EXTRA TRADEMARK OLD BOURBON WITH STAR & SHIELD. Thomas-46, 1870-85, probably variant 2 or 4, 1871-75, as all the A’s have flat tops and there is a star on the base. Here is a wonderful example of the Star & Shield fifth, this would go very nicely with the flask in this sale. A beautiful yellow green, this has some nice whittle and good strong strike. We would lean more towards variant 4 with the star despite the flat A’s as the bottle is fairly thinner than some we’ve seen. A sparkling and very beautiful piece, this one will truly light up your life. Ex. Eastley and Mlasko. Grades 9.8. 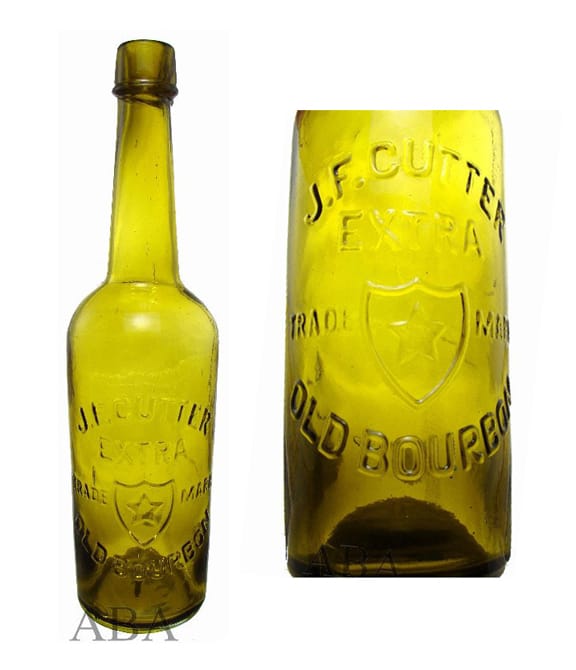 Lot #59 J. MOORE OLD BOURBON E CHIELOVICH & CO SOLE AGENTS with embossed ANTLERS and TRADEMARK. Thomas-90, circa mid 1870’s. Here’s a bottle that remains very popular even though there are as many as three dozen known. Why so popular? There’s just something about the antlers and the name along with the overall design of the bottle that is very appealing. It’s an early fifth and they usually come with lots of crudity. In this case, that is an understatement. In the many years we have been selling western fifths, very rarely have we come across anything as whittled as this. This is not simply whittled, it is whittle on top of whittle and to top it off the embossing is as bold as any we’ve seen. There is even whittle on the antlers! If the OPS in this sale was prized by Thomas as the best, this J. Moore stands right beside it as being one of the most beautiful examples of western whiskey bottles we’ve ever seen. Pictures will tell the story but this is definitely one for the books. Another top specimen Grades a 9.7. Ex- Doc Ritz, Eastley, Mlasko. 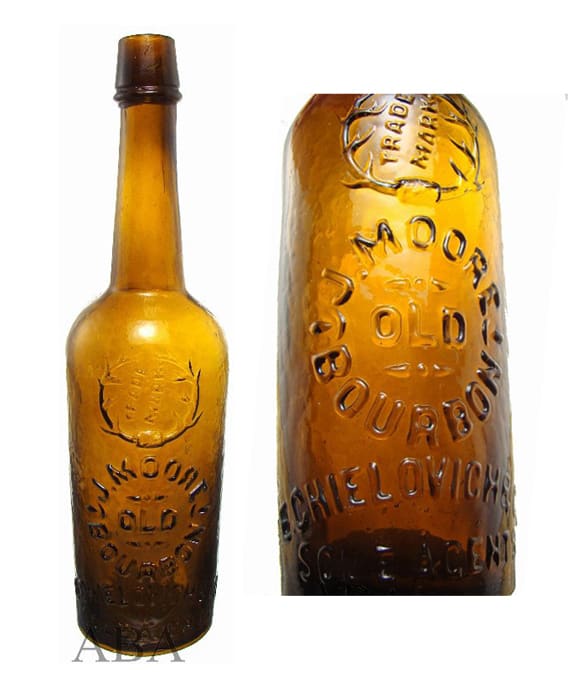 Lot #60 TRADEMARK BARKHOUSE BROS. & CO GOLD DUST KENTUCKY BOURBON N. VAN BERGEN & CO SOLE AGENTS. With embossed horse. Applied top. Few would disagree that the Gold Dust is right up there with the most popular of western fifths. With loads of embossing and an embossed horse, which happened to be a famous racehorse of its time, the Gold Dust remains a mainstay for those who can afford them. This example is a beautiful yellow olive with a ton of whittle and just about everything you’re looking for. We dare say this is one of the top specimens of this bottle known to exist. Ex-McClane, Virginia City, Nevada. Grades 9.7.