This is an end-of-the-year post capturing some images of buildings and cars with architectural and design aspects tying back to bottles. I just love this kind of stuff. Most of it is gone now, only archived in our memories, in photographs and represented on old postcards. If you have any other images, please send to me. The Beer Bottle Car that Marianne Dow recently posted prompted my thinking. 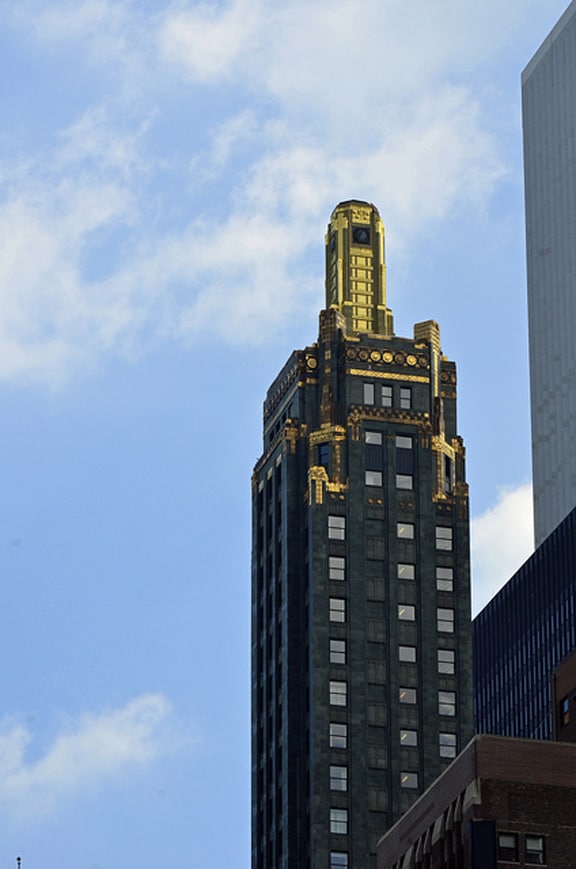 Prohibition Champagne: Now the Hard Rock Hotel, the Carbide and Carbon building was built during the Prohibition by Chicago by Daniel and Hubert Burnham to resemble a champagne bottle with a foil top. While most buildings in Chicago at the time sported a light gray limestone facade, the Carbide and Carbon building was domposed of a polished black granite base and a tower covered in deep green terra cotta – a poke at the repressive Prohibition Era laws. It is one of a handful of Chicago skyscrapers to be allowed to have its tower lights permanently illuminated. 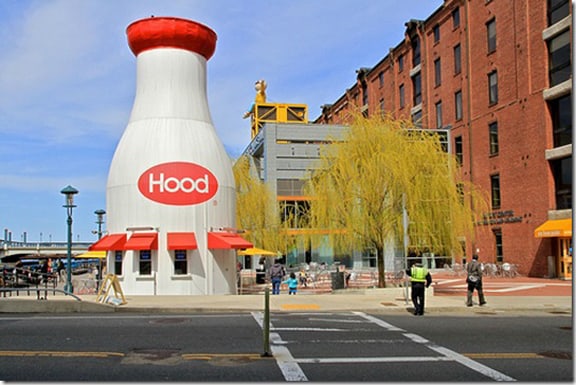 The first Hood farm was in Derry, New Hampshire. Hood started the farm to guarantee a supply of good wholesome milk. The milk was shipped by rail into the plant in Boston. He later opened more farms in Maine to supplement the New Hampshire farm to meet the demand for the fresh milk. If you visit the Boston Children’s Museum you’ll see the giant Hood bottle outside. In warmer months, you can get snacks and ice cream from the bottle! It’s a New England tradition. If you look closely to the right of the top of the bottle, you can see a giant Arthur sitting on the yellow part of the building! 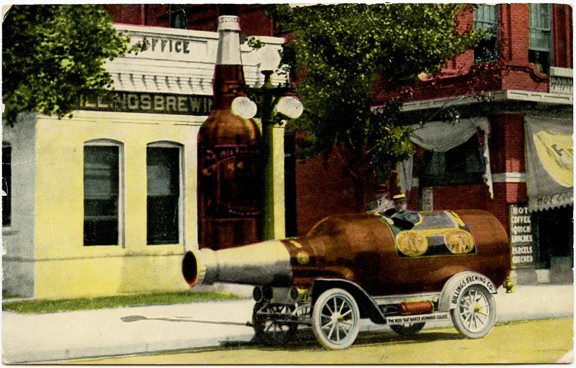 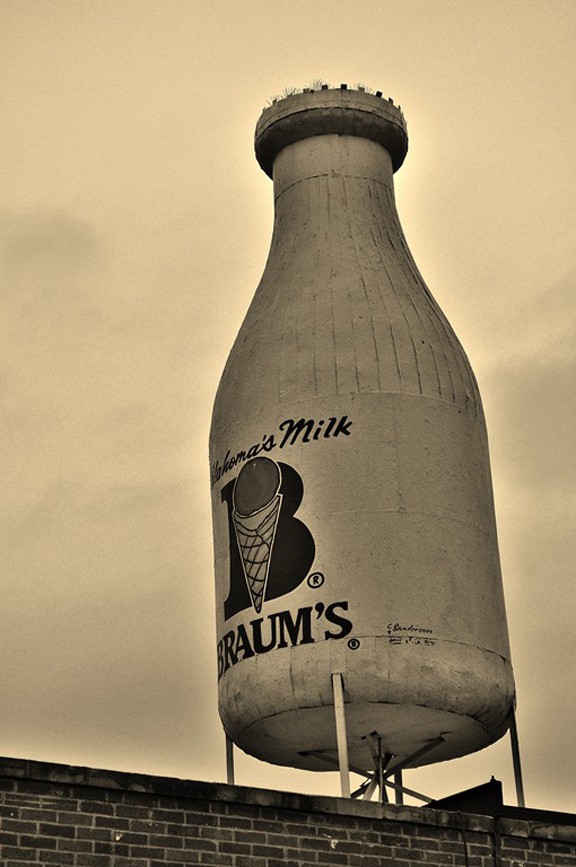 The giant Braum’s milk bottle sits on top of a little building in Oklahoma City on an island in the middle of Classen Blvd. The building now houses a small Asian sandwich shop, but the bottle remains. 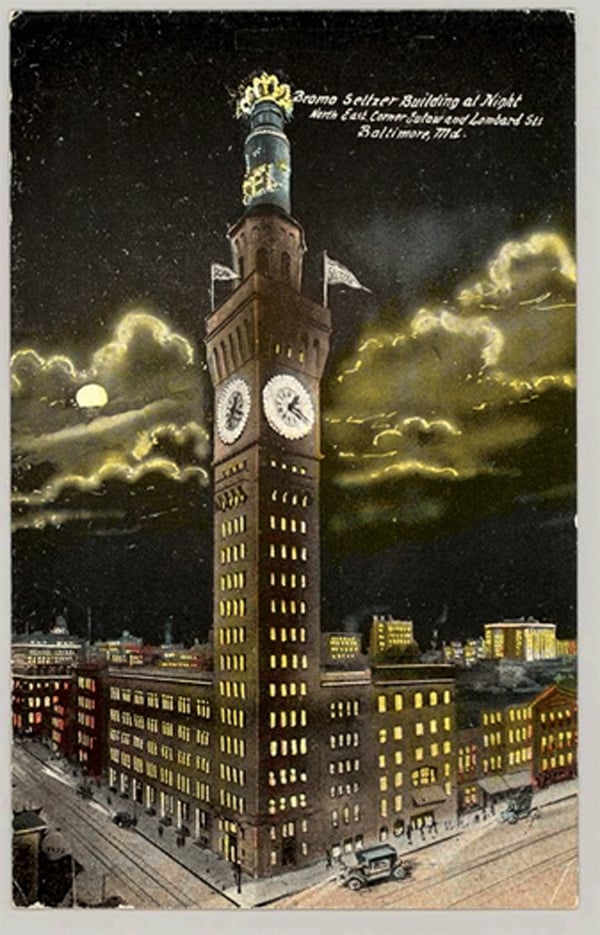 Emerson Bromo-Seltzer Tower – Baltimore, Maryland – This historic structure, which is listed on the National Register of Historic Places, was modeled after the Palazzo Vecchio in Florence, Italy. It was completed in 1911 and has been a Baltimore landmark ever since. The tower was designed by Joseph Evans Sperry and built by Captain Isaac Emerson, the inventor of Bromo-Seltzer. The tower was originally topped with a 51-foot revolving replica of the blue Bromo-Seltzer bottle, which was illuminated by 596 lights and could be seen from 20 miles away. The four clock faces are all still working; however, the bottle had to be removed in 1936 due to structural concerns. 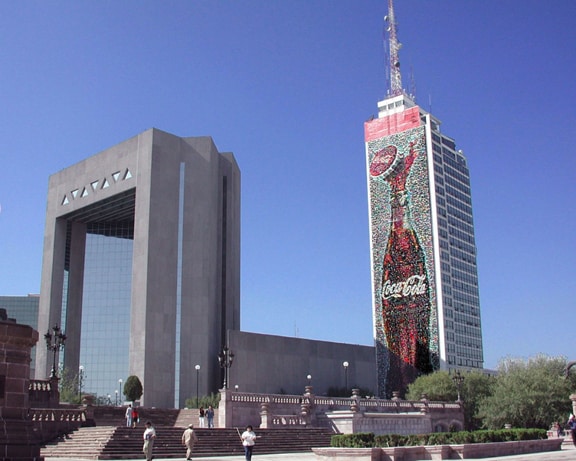 Check out the massive Photomosaic of a Coke bottle on the side of a building in Mexico. 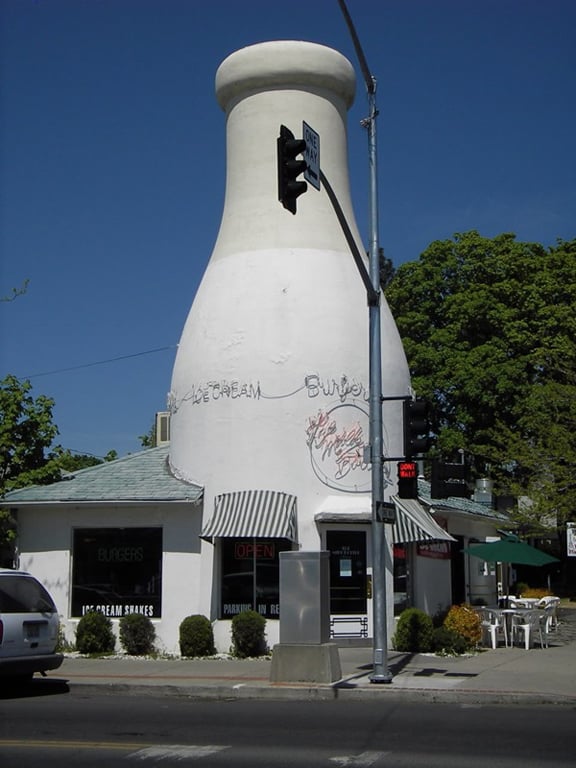 They say that the World’s Largest Milk Bottle is located in Oklahoma City. It is a uniquely shaped little structure sitting alongside an old alignment of Route 66. Originally known as “Triangle Grocery and Market”, the building changed its name to “Milk Bottle Grocery” shortly after a large metal milk bottle sign was added to the roof in 1948. 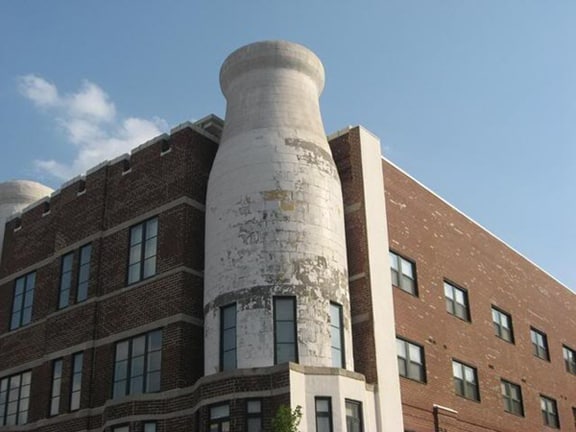 Benewah Milk Bottle in Spokane, Washington was built in 1935. Now it functions as an antique shop. 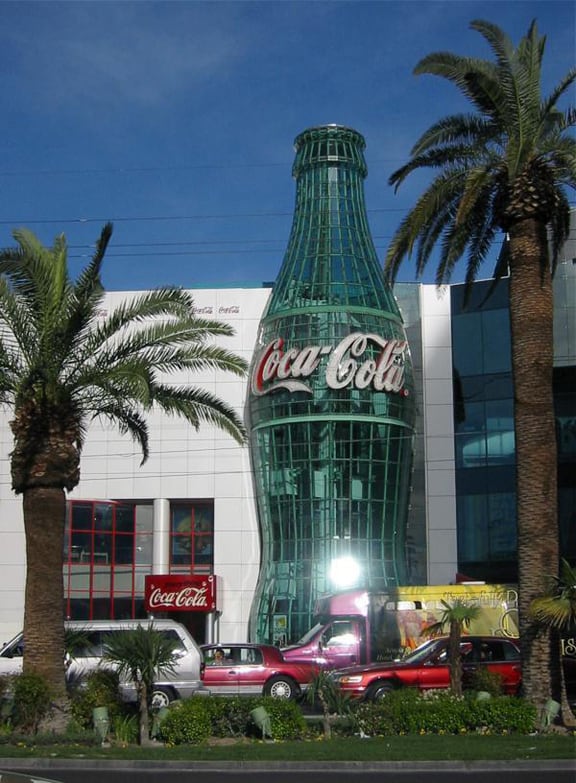 This enormous Coke bottle used to house a Coca- Cola museum where you could sample dozens of  different Coke products from around the world.  Sadly it is now closed. 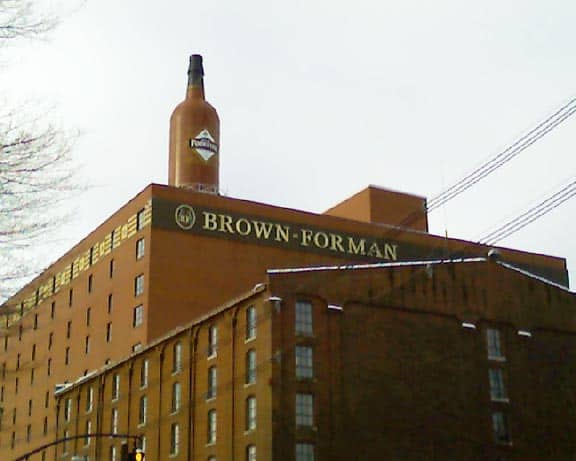 The Brown-Forman Corporation in Louisville, Kentucky has a water tower shaped like one of its liquor products. 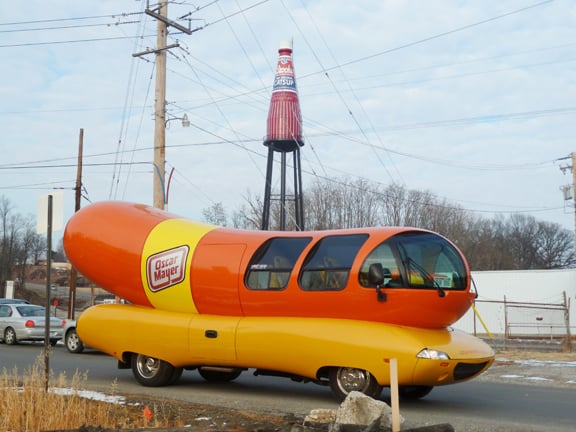 The World’s Largest Catsup Bottle towers over Collinsville, Illinois. This 170 ft. tall water tower was built in 1949 by the W.E. Caldwell Company. A bottle of catsup big enough to top the Wienermobile!

Ferdinand Meyer V is a native of Baltimore, Maryland and has a BFA in Fine Art and Graphic Design from the Kansas City Art Institute and School of Design. Ferdinand is the founding Principal of FMG Design, a nationally recognized design consultation firm. Ferdinand is a passionate collector of American historical glass specializing in bitters bottles, color runs and related classic figural bottles. He is married to Elizabeth Jane Meyer and lives in Houston, Texas with their daughter and three wonderful grandchildren. The Meyers are also very involved in Quarter Horses, antiques and early United States postage stamps. Ferdinand is the past 6-year President of the Federation of Historical Bottle Collectors and is one of the founding members of the FOHBC Virtual Museum.
View all posts by Ferdinand Meyer V →
This entry was posted in Advertising, Art & Architecture, History, Humor - Lighter Side, Milk & Creamers and tagged Beer Bottle Car, Benewah Milk Bottlem Brown-Forman, Braums, Bromo-Seltzer, Carbide and Carbone, Champagne, Coca-Cola, Heintz Ketsup, Hood Dairy, Oscar Mayer, Prohibition, Route 66. Bookmark the permalink.