I have been watching this bottle with interest on the American Bottle Auctions web site for their current Auction. A rather amazing bottle with an interesting story. Jeff Wichmann, ABA chief, has written it up and posted the following pictures:

It’s quite a story. During the 1940’s, a gentleman in Tucson, Arizona purchased a very old adobe row-house in one of the oldest parts of town. Working to restore the building, he discovered a closed-off and long abandoned basement. Venturing into the dark, dusty space he found boxes of papers and artifacts that identified the previous owner as Julius Goldbaum, a frontier saloon keeper and wholesale liquor dealer for the southern part of Arizona Territory. Included were bookeeping and invoicing documents, since donated to a local museum. Among the scattered piles were several old bottles, including three of these magnificent back bars. Sadly, one had the neck broken and missing, another just a piece of the lip, but the third one? Well the third one we present here was found in perfect condition. “Attic (basement) Mint,” if you will.

Over the many years since finding the bottles the owner has kept but one of these unique back bars. He recently contacted us and in addition to this fabulous back bar we took in consignment, we were also given a clear whiskey with the same name with original labels and another back bar with etched writing. All were previously owned and used by Julius Goldbaum and all were found in his basement. We were aware of this bottle; it is listed here and there but we were unaware that there is only one known perfect example intact. It is a beautifully designed bottle, no doubt a reflection of the pride and romance Julius had for his saloon wholesale liquor business. Also, notice the A.T., which stands for Arizona Territory, made before Arizona became the 48th state on February 14, 1912. Goldbaum was a well-known liquor distributor in Tucson from 1887 to 1903. For more information on Mr.Goldbaum click on Goggle to find some interesting information. Much of it, along with this description, we thank Michael R. Miller for. We would include more info however the space here is limited.

The bottle is almost as perfect as the day it was made. The enamel is virtually untouched, as is the gold paint. The bottle is a spin mold fifth with the stars and gold décor intertwining in a magnificent display of craftsmanship and art. We are aware of three, possibly four known examples, the three found in the basement and another in extremely poor condition. Even the damaged and repaired examples have sold for huge sums and it’s likely some back bar collectors will view this example as possibly the finest back bar bottle in existence. The incredible detail, the extraordinary provenance and almost surreal condition certainly puts it up there with the best of the very best. The bottle may have a light scratch or two with the enamel and paint as described. 100% accurate documentation by noted collector, Ralph Holligbaugh and tested positive for autheticity with flying colors. A Grade 9.9. Estimate: $ 10,000 – $ 20,000. Final Sale Price: $22,500 plus 15% auction house premium. 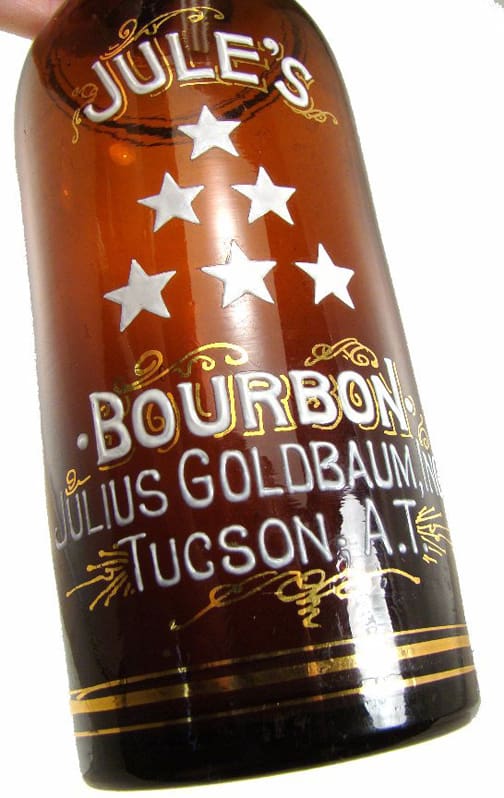 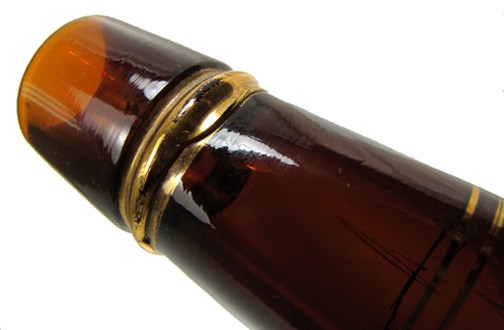 Ferdinand Meyer V is a native of Baltimore, Maryland and has a BFA in Fine Art and Graphic Design from the Kansas City Art Institute and School of Design. Ferdinand is the founding Principal of FMG Design, a nationally recognized design consultation firm. Ferdinand is a passionate collector of American historical glass specializing in bitters bottles, color runs and related classic figural bottles. He is married to Elizabeth Jane Meyer and lives in Houston, Texas with their daughter and three wonderful grandchildren. The Meyers are also very involved in Quarter Horses, antiques and early United States postage stamps. Ferdinand is the past 6-year President of the Federation of Historical Bottle Collectors and is one of the founding members of the FOHBC Virtual Museum.
View all posts by Ferdinand Meyer V →
This entry was posted in Auction News, Bourbon, Digging and Finding, News, Spirits, Whiskey and tagged American Bottle Auctions, back bar, Bourbon, Jeff Wichmann, Jule's Bourbon, Julius Goldbaum, Ralph Holligbaugh, Tucson. Bookmark the permalink.