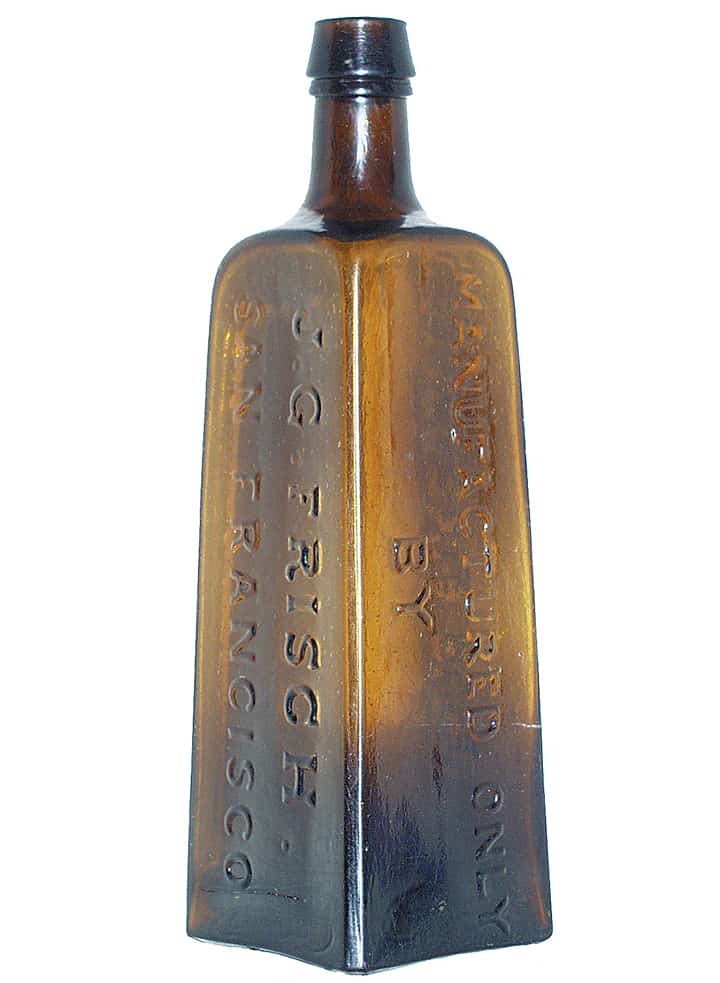 I was in Amityville, New York this past Thursday and Friday visiting with John and Sheila Feldmann for my upcoming Antique Bottles and Glass Collector series article on Great Collectors and their Collections. While taking pictures I came across an extremely rare California Bitters. This example is broken but is still really a great bottle. The only complete example resides safely in a West Coast collection. 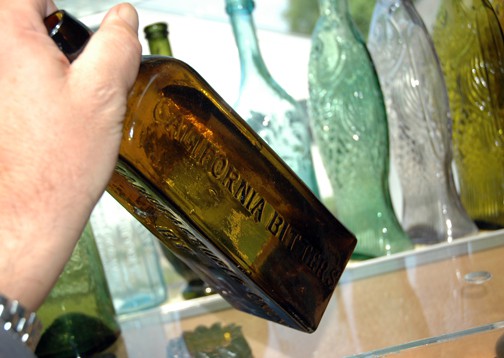 Over on the WesternGlopTopWhiskies blog site, there has been a lively discussion about whether the California Clubhouse whiskey is the top dog of the western whiskey world. Several reasons were cited as to why it should retain the number 1 spot among the collectors of these coveted cylinders of glass. Full face embossing, interesting, elaborate monogram, color, etc.

I thought it might be interesting to do such a parallel comparison with the bitters. Here is a picture of the California Bitters / Manufactured only by / J. G. Frisch San Francisco, this bitters has the word California spelled out, it also has San Francisco spelled out and it would compare with the whiskies that have full face embossing by having 3 embossed panels. It’s definitely an early made bottle among the bitters bottles standards. It’s rarity is pretty much unquestioned with this example residing on the East coast and the other residing on the West coast. Both examples are an amber coloration with a iron pontil mark on the base. It certainly deserves to rank among the top contenders for the number 1 coveted spot. The one area that it may fall short is whether bitters collectors would consider a bottle that was of western distribution, but eastern in manufacture to hold the coveted number 1 ranking. Obviously there is some consensus to this, as another highly desireable bitters, the Bryant’s Stomach Bitters also a western marketed product but of eastern origin and manufacture is coveted by advanced western bitters collectors and has been published in print as to being considered the top western bitters.

If a vote were to be held between these two examples only, my personal choice would be the Frisch bottle probably based on similar criteria that the whiskey collectors use. However like the whiskey collectors if the listing of choice for the coveted top honor were open, I certainly would have nominated another contender! 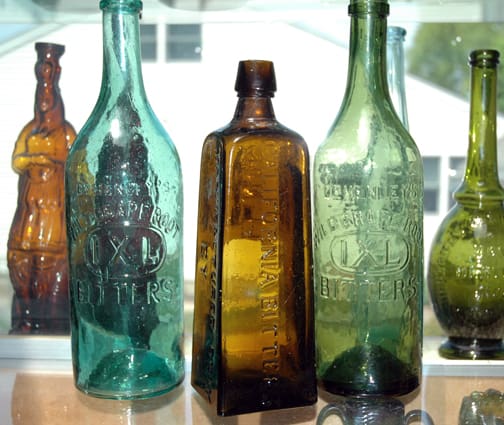 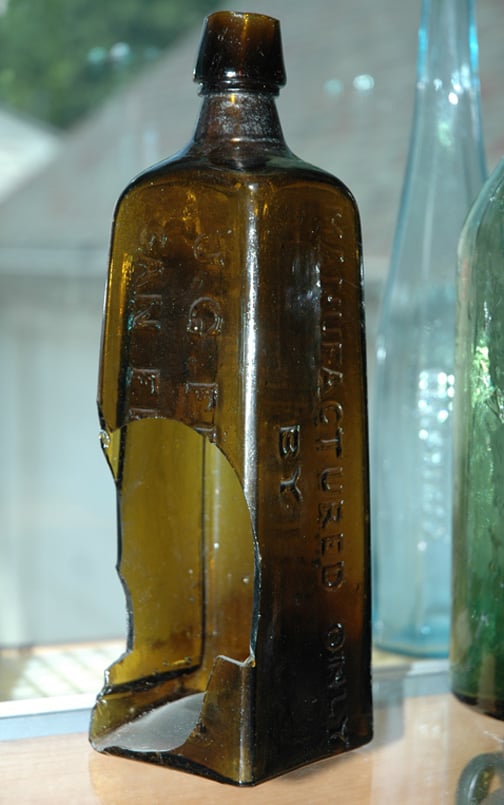 Ferdinand Meyer V is a native of Baltimore, Maryland and has a BFA in Fine Art and Graphic Design from the Kansas City Art Institute and School of Design. Ferdinand is the founding Principal of FMG Design, a nationally recognized design consultation firm. Ferdinand is a passionate collector of American historical glass specializing in bitters bottles, color runs and related classic figural bottles. He is married to Elizabeth Jane Meyer and lives in Houston, Texas with their daughter and three wonderful grandchildren. The Meyers are also very involved in Quarter Horses, antiques and early United States postage stamps. Ferdinand is the past 6-year President of the Federation of Historical Bottle Collectors and is one of the founding members of the FOHBC Virtual Museum.
View all posts by Ferdinand Meyer V →
This entry was posted in Bitters, Collectors & Collections and tagged Amityville, Antique Bottle and Glass Collector, bitters bottle, California Bitters, J.G. Frisch, John Feldmann, New York, San Francisco, Western Glop Top Whiskey. Bookmark the permalink.