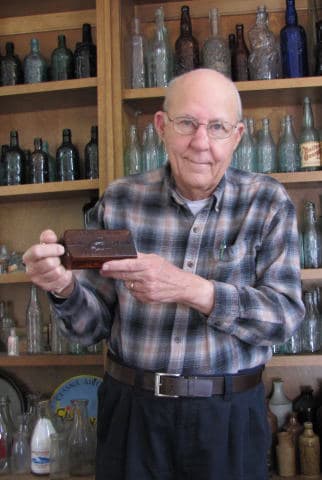 Since I joined the Federation (FOHBC) and was elected to the Board, I have had the pleasure of working with Bill Baab, A person I have heard so much about. I thought I would take a moment to examine some of the many things Bill has done for the Hobby and the Federation.

Born January 29, 1935 in Glenside, Pennsylvania, Bill Baab moved to Atlanta in 1937 and to Augusta in 1940 when his father was transferred south by W.F. Potts Son & Co., in Philadelphia. After graduation from Boys Catholic High School in 1953, Baab joined The Augusta Chronicle in 1955 as a copy clerk. In two years, he had worked his way onto the staff. In 1960, he left to join the Georgia Game and Fish Department as a public relations assistant. In 1961, he became sports editor of the Thomasville (Ga.) Times-Enterprise and in 1964, he returned to The Chronicle as outdoor editor and sports writer. He retired at the end of January 2000.

Bill started collecting antique bottles in the winter of 1969. He founded the Georgia-Carolina Empty Bottle Club during the early 1970s and was secretary and newsletter editor of the Horse Creek Antique Bottle Club in Langley, South Carolina, founded in 2003 by Mrs. Geneva Greene of Langley, South Carolina. He resigned from those positions in 2011.

In 1972, Bill began working on “Augusta on Glass” after digging numerous drug store, soda and beer bottles from Augusta and wondering about their historical backgrounds. He and his wife, Bea, self-published the book in 2007 after getting technical help from Mrs. Kathy Sathe, of Fletcher, North Carolina. In 2010, they self published a book on Augusta drug store bottles. A Dairy Book is in the third and fourth printing. A Book on Augusta go-withs (items that “go with” a bottle collection, such as bottle openers, billheads, letter heads) is in the works.

Bill joined the Federation of Historical Bottle Collectors in 1996 and later volunteered to become its Southern Region editor, a position he resigned from nearly a dozen years later in 2011. He compiled a Southern Region report for each issue of the Federation journal, Bottles and Extras. He also edits many of the stories to be found in that magazine for good English, grammar, spelling, punctuation, continuity and factual contents.

Bill started researching a series of stories detailing the state-by-state history of bottle collecting. Another project contains sketches of FOHBC past presidents and he also updated the Federation Honor Roll and Hall of Fame Lists.

Bill has been honored by the FOHBC, receiving prestigious President’s Awards from Ralph Van Brocklin in 2004 and John Pastor in 2006. In 2011, he was inducted into the FOHBC Hall of Fame.

What more can this man do? Thank you Bill.

Ferdinand Meyer V is a native of Baltimore, Maryland and has a BFA in Fine Art and Graphic Design from the Kansas City Art Institute and School of Design. Ferdinand is the founding Principal of FMG Design, a nationally recognized design consultation firm. Ferdinand is a passionate collector of American historical glass specializing in bitters bottles, color runs and related classic figural bottles. He is married to Elizabeth Jane Meyer and lives in Houston, Texas with their daughter and three wonderful grandchildren. The Meyers are also very involved in Quarter Horses, antiques and early United States postage stamps. Ferdinand is the past 6-year President of the Federation of Historical Bottle Collectors and is one of the founding members of the FOHBC Virtual Museum.
View all posts by Ferdinand Meyer V →
This entry was posted in Collectors & Collections, Druggist & Drugstore, FOHBC News, History, Medicines & Cures and tagged Augusta, Bill Baab, fohbc, Georgia, Hall of Fame, Ralph Van Brocklin. Bookmark the permalink.