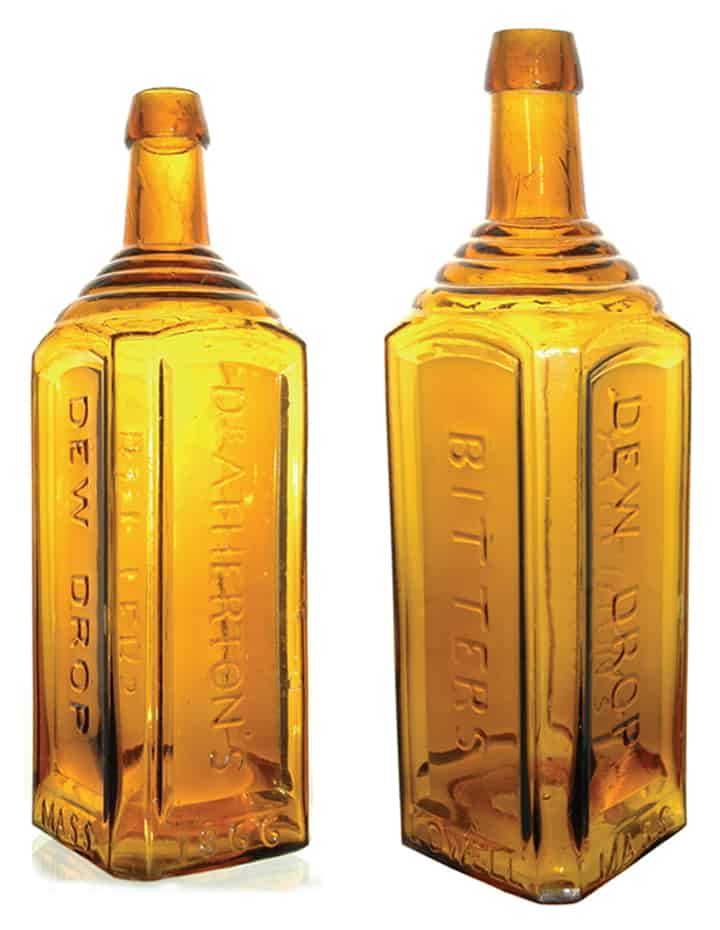 At the Heckler Columbus Day Saturday Field Event (see info on 2011 event) in 2006, I was greeted by a number a collector contacts and friends who said that an Atherton’s Dew Drop Bitters was on site. Quick navigation led to the front seat of Greg Bair’s car. Greg gently unwrapped his new find and I almost dropped over. Boy is this baby rare and a beauty. Some quick negotiations and the bottle was mine. The bottle is pictured at the top of the post and at Greg’s place further below.

Hi Ferdinand, It was great seeing you last weekend, both at Norm’s and Keene NH. Here’s a selection of photos (see below) that we took of your bitters bottle off our back porch. Hope you can use one of them in the AWESOME catalog of your collection. It was a pleasure doing business with you and we’ll keep you in mind if we come across another great bitters bottle. I found the pictures of the bottle prior to having it cleaned; I’ll send them to you if you can email me with a mailing address. Give me a call when you have a chance and we can talk about where we dug and found the bottle. The date we uncovered it was December 19, 2004. 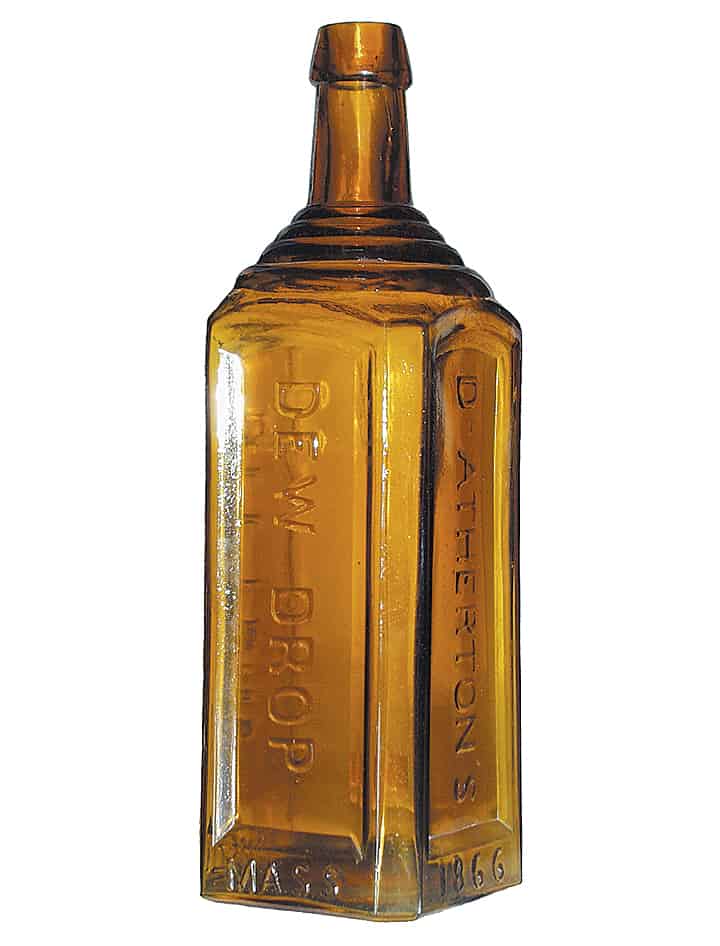 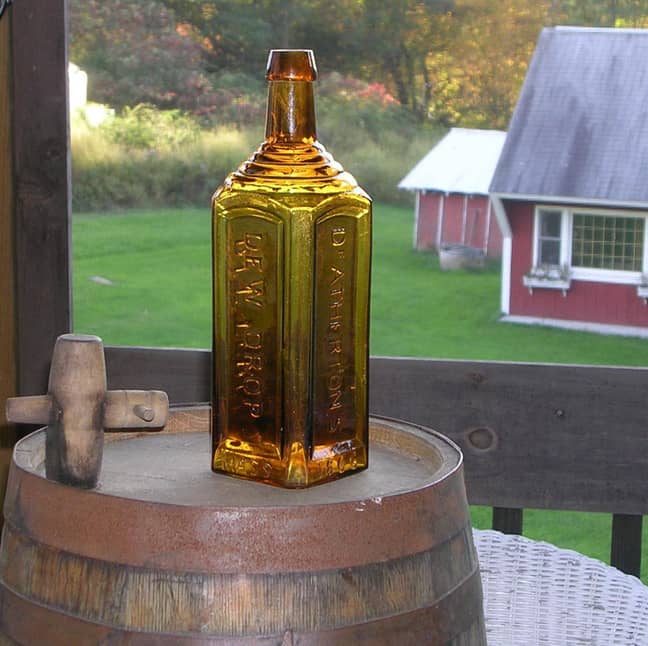 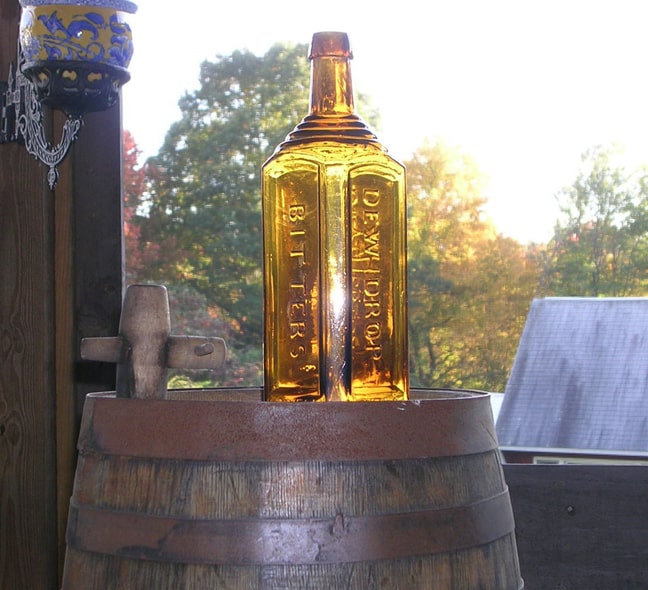 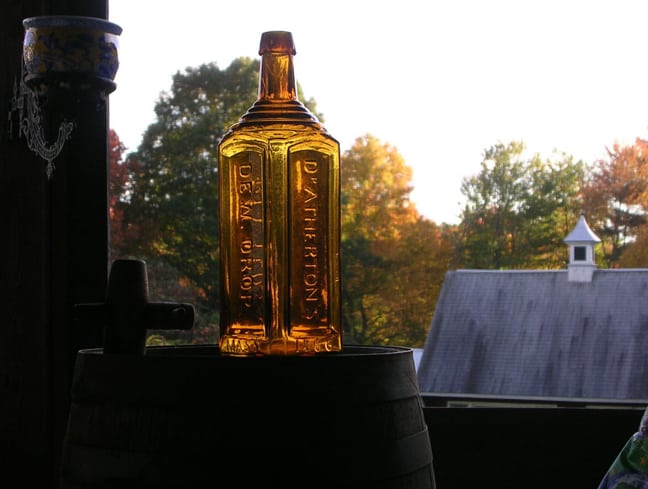 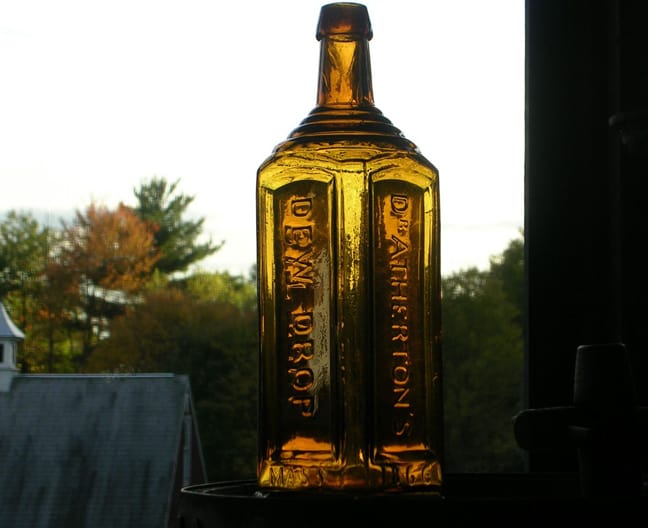 Not much is known about this bitters though we can find advertising in Massachusetts in 1867 for Dr. Atherton’s Medicated Dew Drop Bitters. 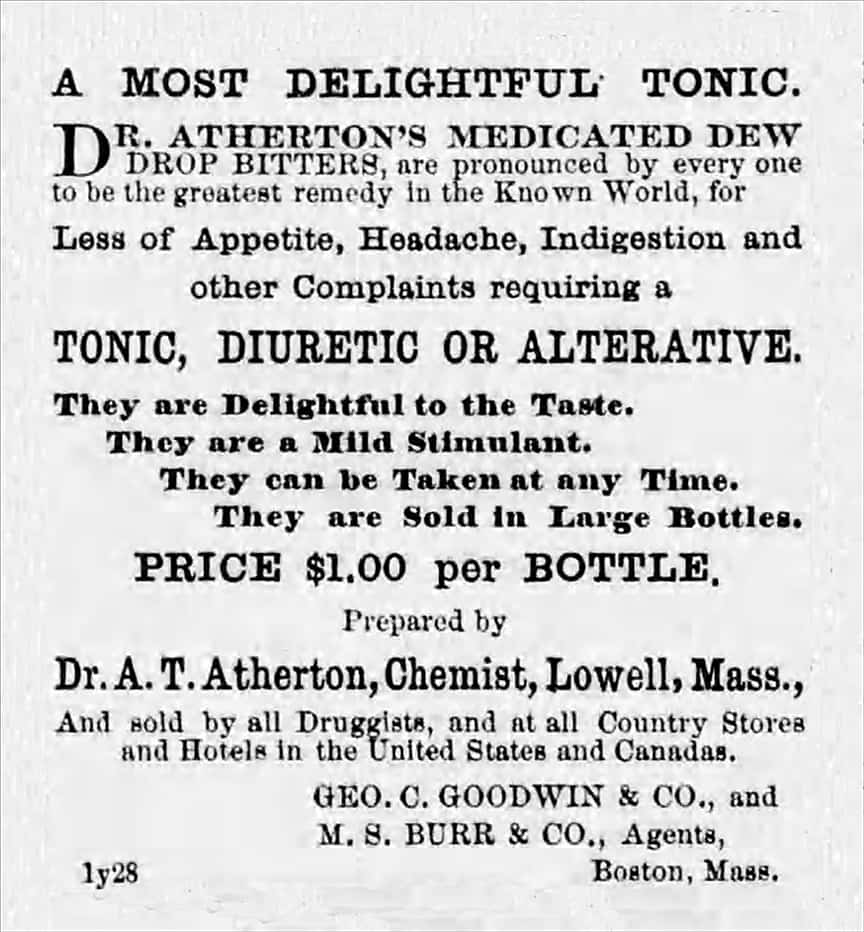 Abel T. Atherton (born about 1840 in Massachusetts) was a Chemist in Lowell, Massachusetts where he put out his brand under T. Atherton & Son. He was a young 27 years old at that time. Previously he was accountant. His parents were from England. His address was 27 Clay Street according to a 1865 city directory. He said his bitters was the greatest remedy in the known world for Loss of Appetite, Headache, Indigestion and other Complaints requiring Tonic, Diuretic or Alterative. 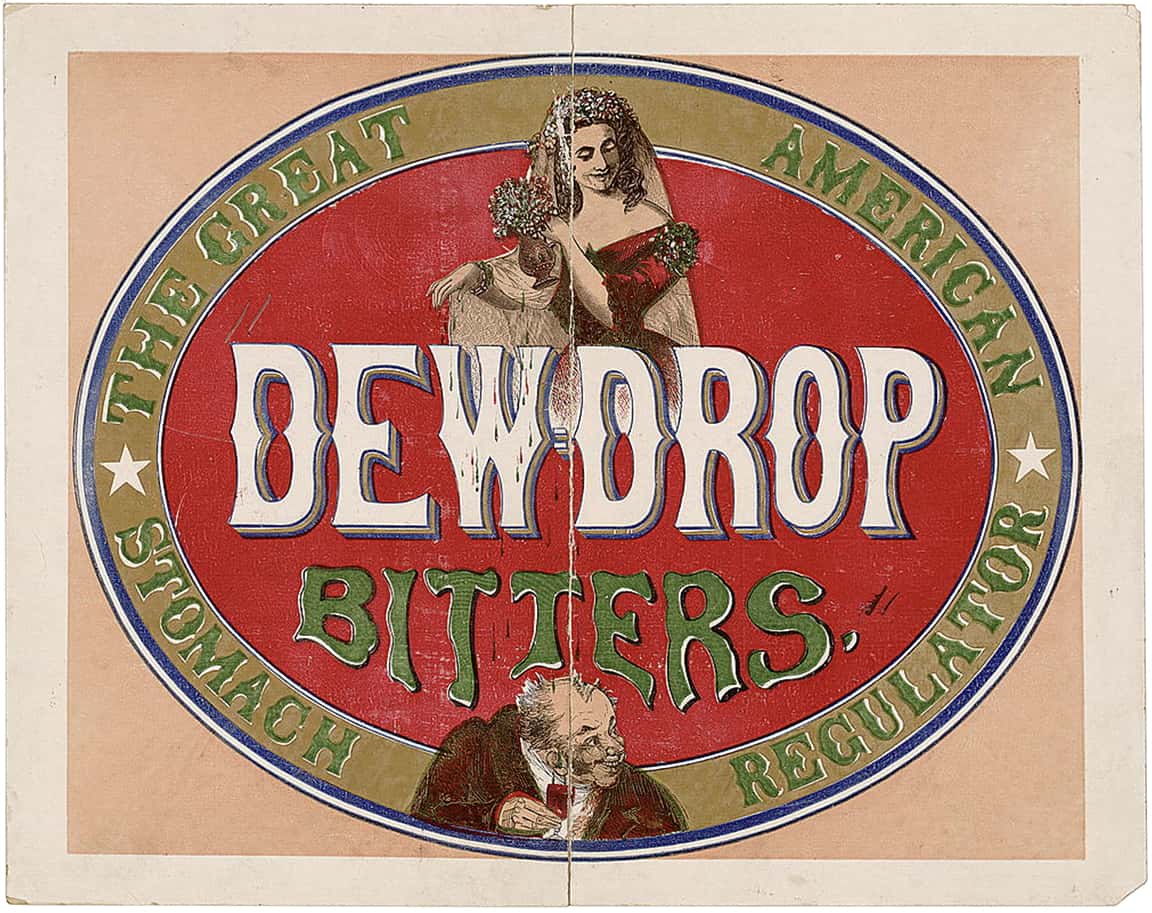 Dew Drop Bitters print advertisement showing a woman, perhaps a goddess of nature, dripping dew from a pitcher of flowers onto a man below holding a small glass to catch the drops. c1868 – Library of Congress

He sold his bitters in large 1$ bottles. He also put out a Cherry Cordial which he advertised separately for the same price. An Eye Balm was also marketed for 25 cents a bottle. We also see no record of him really being a doctor.

The bitters was apparently manufactured by E. Mishler, 405 Penn Street in Reading, Pennsylvania according to a Dew Drop Bitters sign dated 1868. George C. Goodwin & Co. and M.S. Burr & Co. were his agents in Boston, Massachusetts.

Later in life, Atherton was listed as a machinist. His later years were spent in Pawtucket, Rhode Island. He died in 1915.

Ferdinand Meyer V is a native of Baltimore, Maryland and has a BFA in Fine Art and Graphic Design from the Kansas City Art Institute and School of Design. Ferdinand is the founding Principal of FMG Design, a nationally recognized design consultation firm. Ferdinand is a passionate collector of American historical glass specializing in bitters bottles, color runs and related classic figural bottles. He is married to Elizabeth Jane Meyer and lives in Houston, Texas with their daughter and three wonderful grandchildren. The Meyers are also very involved in Quarter Horses, antiques and early United States postage stamps. Ferdinand is the past 6-year President of the Federation of Historical Bottle Collectors and is one of the founding members of the FOHBC Virtual Museum.
View all posts by Ferdinand Meyer V →
This entry was posted in Bitters, Bottle Shows, Collectors & Collections, Digging and Finding, Figural Bottles, History and tagged Abel T. Atherton, Atherton's Dew Drop Bitters, chemist, Columbus Day, Ferd Meyer, ferdinand meyer, Greg Bair, Heckler, Keene, Lowell, Mass, Massachusetts. Bookmark the permalink.