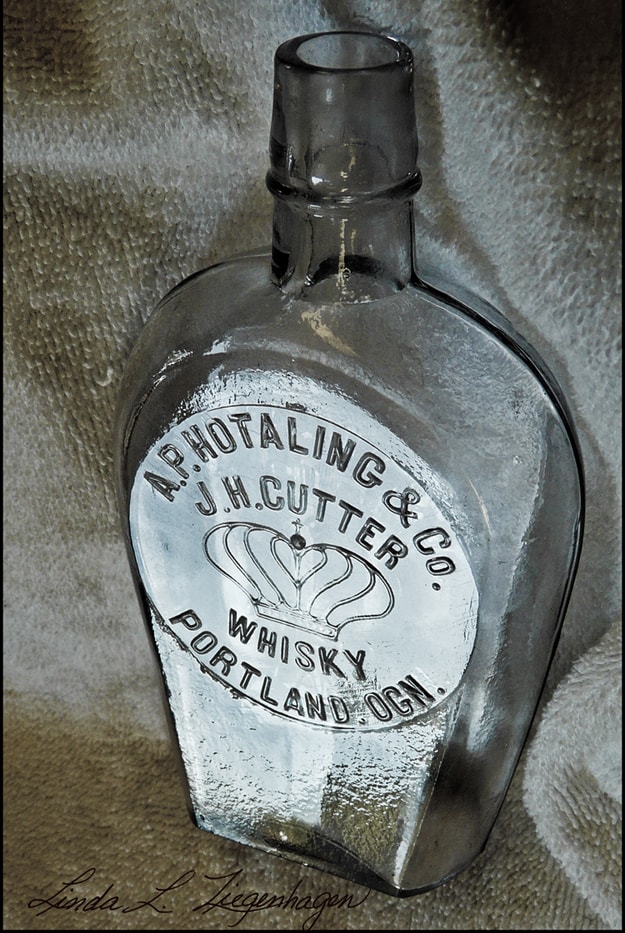 Garth states that “an 80 year old man had the bottle and was going to put it on eBay. He dug it in The Dalles, Oregon in the 1970’s. He doesn’t want his name used. Richard Siri and Mike Dolcini have the half pints. I have another shard of the pint that Randy Littlefied had dug. It shows the slug plate well but the top is broken off. Apparently this is the only one known”.

OGN is an older abbreviation for Oregon and WHISKY is an older spelling of whiskey. Also the crown is a much fancier crown than normally used. It doesn’t have the bumps on the shoulder that were invented in 1874 for air vents.

A.P. Hotaling opened the Portland office in 1873 and was the most successful whiskey dealer in the west after he acquired the Cutter brand name. There is much more to the story of acquiring the Cutter brand already on the blogs. See Western Glob Top Whiskey’s Blog.

Ferdinand Meyer V is a native of Baltimore, Maryland and has a BFA in Fine Art and Graphic Design from the Kansas City Art Institute and School of Design. Ferdinand is the founding Principal of FMG Design, a nationally recognized design consultation firm. Ferdinand is a passionate collector of American historical glass specializing in bitters bottles, color runs and related classic figural bottles. He is married to Elizabeth Jane Meyer and lives in Houston, Texas with their daughter and three wonderful grandchildren. The Meyers are also very involved in Quarter Horses, antiques and early United States postage stamps. Ferdinand is the past 6-year President of the Federation of Historical Bottle Collectors and is one of the founding members of the FOHBC Virtual Museum.
View all posts by Ferdinand Meyer V →
This entry was posted in Digging and Finding, Flasks, Whiskey and tagged AP Hotaling. Whiskey, Cutter, Garth Ziegenhagen, J H Cutter, Linda Ziegenhagen, Mike Dolcini, oregon, Portland, Richard Siri, The Dalles, Western Glop Top Whiskey, whisky. Bookmark the permalink.